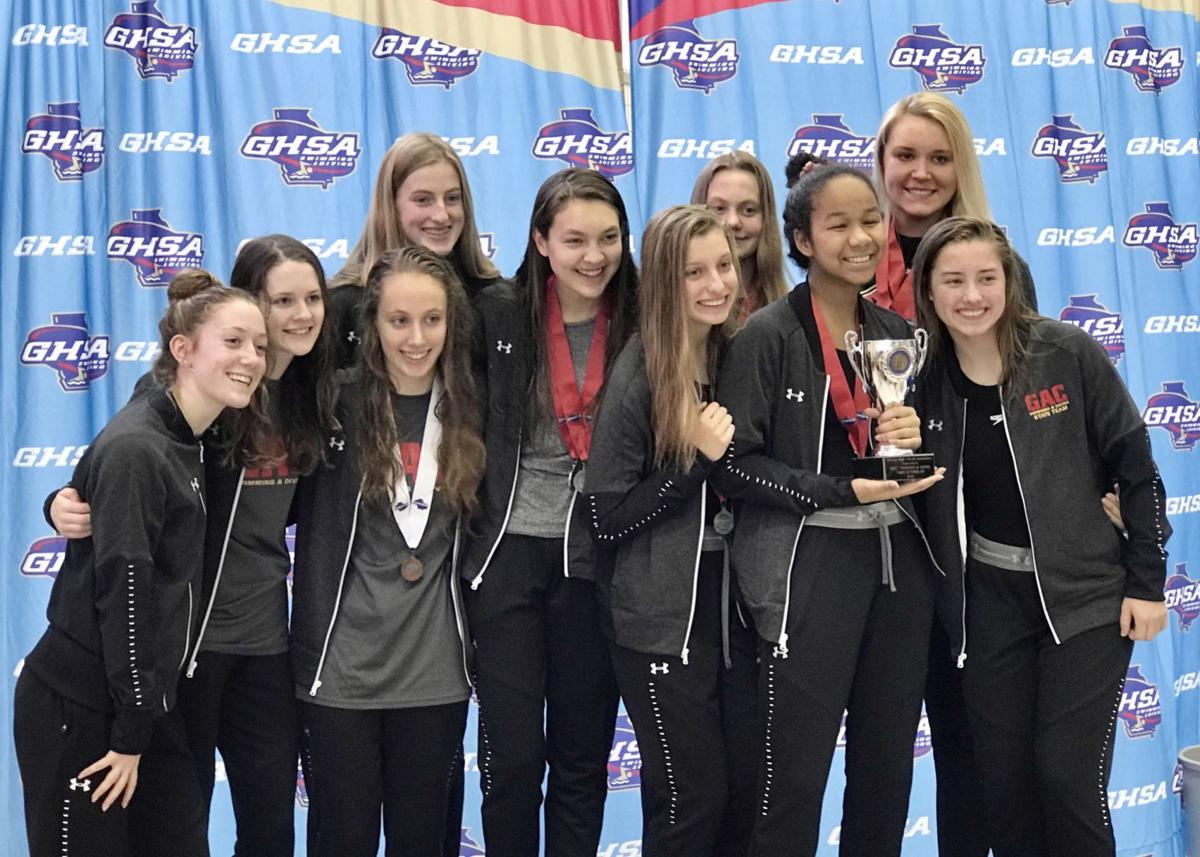 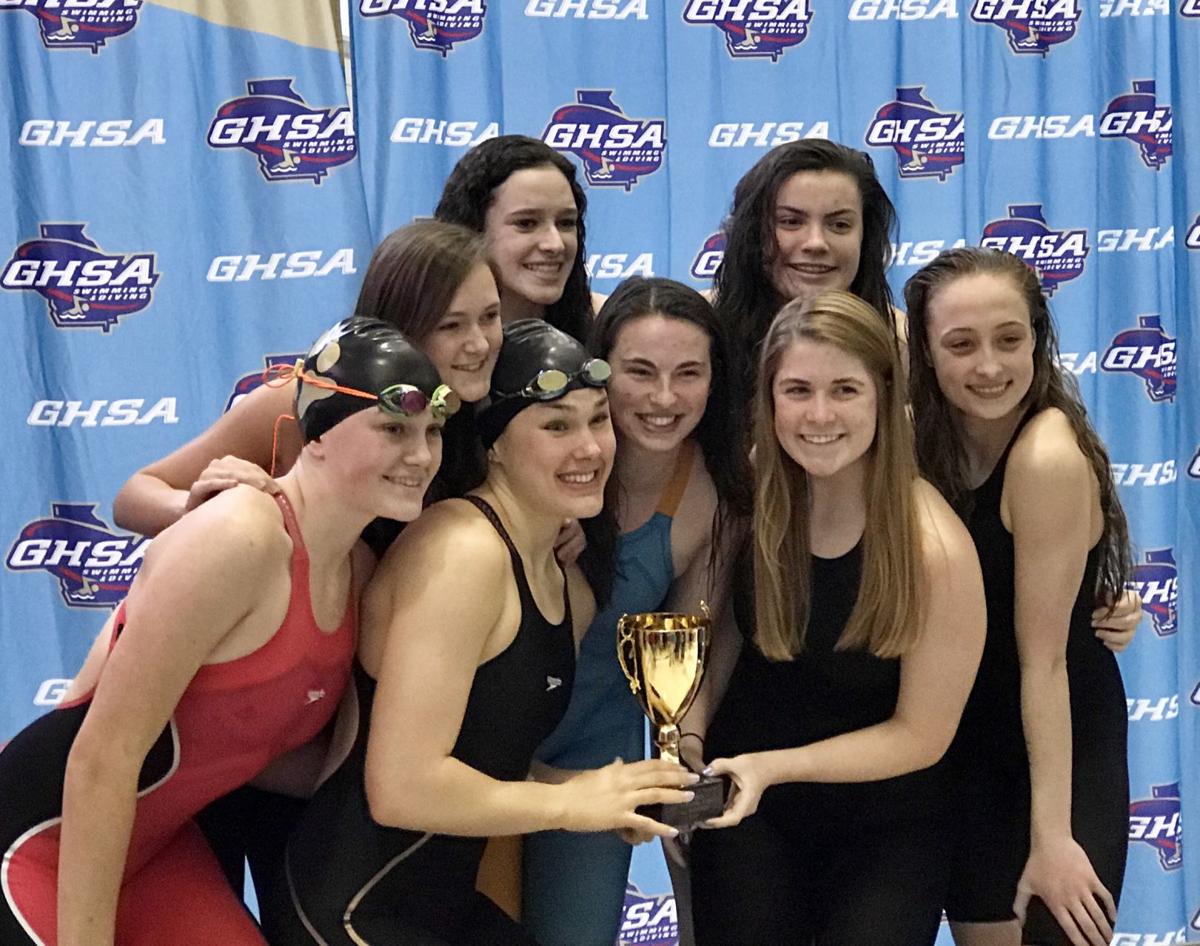 ATLANTA — The Wesleyan boys and Greater Atlanta Christian girls both finished as runners-up at the Class 1-3A swimming championships Saturday at Georgia Tech.

The Wesleyan girls and GAC boys weren’t far behind.

They were third and fourth, respectively.

All in all, an impressive county showing in the small schools state meet.

For Wesleyan, it was a sweet step up for both the boys and girls on the podium. They were third and fourth, by painfully narrow margins, a year ago.

“Very excited,” said Wolves head coach Kevin Kadzis, who was grinning widely at the understatement. “We’ve been working a long time to get past third place for the boys. To get a runner-up finish is a great accomplishment.

“And the girls, too, to get on the podium after having been in fourth place for two or three years in a row, to get over that hump and have both our teams on the podium is a big deal to us. And against great competition.”

Westminster ran away with both titles, hundreds of points ahead of the rest of the field.

In the boys, Westminster scored 552 points. Wesleyan had 255 for second place and were sparked by a third-place finished by junior Jacob Price in Thursday’s diving finals.

“It really set our boys team up with a great advantage,” Kadzis said.

“Those four seniors have been the centerpiece of our program for several years now,” Kadzis said. “They did a great job. All of them scored individual points as well as had significant contributions in relays.”

Junior Evan Yeager and sophomore Mitchell Badciong provided another boost in the relay.

“Mitchell just stopped playing football like three weeks ago,” Kadzis said with a laugh. “He swam in two meets and practiced for like two weeks. He jumped in the pool and crushed it. It was amazing.”

Freshman Henry Wasmuth dropped time in his two individual events, including a sixth-place finish in the 500 free, and swam relays.

Price was the only individual on the podium and the 400 free relay finished second.

“It speaks to the team dynamic,” Kadzis said.

Senior Hannah Wasmuth starred for the Wesleyan girls. She defended her title in the 100 backstroke in an all-american time of 55.34 seconds and was runner-up in the 200 free. Wasmuth finished in 1:49.81, just .46 off the winning pace.

“Hannah had a fantastic day — just like last year,” Kadzis said. “She was swimming like a college swimmer. She had a gutsy race, a great race in the 200 free to finish in second place.

“She also swam a fantastic anchor leg in that 400 free relay and backstroke in the medley. She had a busy day.”

Carson Schiller was the other individual scorer in the 50 and 100 free. Freshman Caroline Stewart and senior Lindsay Rappe both swam three relays for the Wolves.

“We had a great day,” Kadzis said. “I’m really proud of the whole community. We just really want to maximize our potential. We can’t control what other people do and we had some really great competition and we did the absolute best we could.

The girls scored 282 points. Westminster had 535. In fact, the Spartans were second overall among all Class A-AAAAA schools.

“They did awesome,” Krug said. “They killed it. Better than we ever would have imagined. Their swimming made us more hopeful as the meet went on. We knew we were going to do great, but we didn’t think we would do this great.”

The 200 medley relay with Gia-An Maynard, Caroline Khan, Mitsue Ostapiuk and Rachel Todebush started the meet off with a bang, coming in second to Westminster. Khan and Ostapiuk both moved up in the 100 free to come in sixth and seventh, respectively.

The big race for the Spartan girl was the 500 free. Alsobrook was third, Todebush was fourth and Jenna Jackovich was ninth.

“A first-ever for GAC,” Krug said.

They followed that up with a runner-up effort in the 200 free relay.

“They supported each other and they surprised us,’ Krug said. It’s a great surprise.”

For the boys, Carter led the way with the win in the 500 free — something that hasn’t happened at GAC for more than a decade — and a fourth-place finish in the 200 free.

The 400 relay team of Carter, Alex Winsness, Seth McGaughey and Davis Keller were third in a school record 3:19.83, just .12 off second-place Wesleyan.

“They went fast,” Krug said with a giddy laugh.