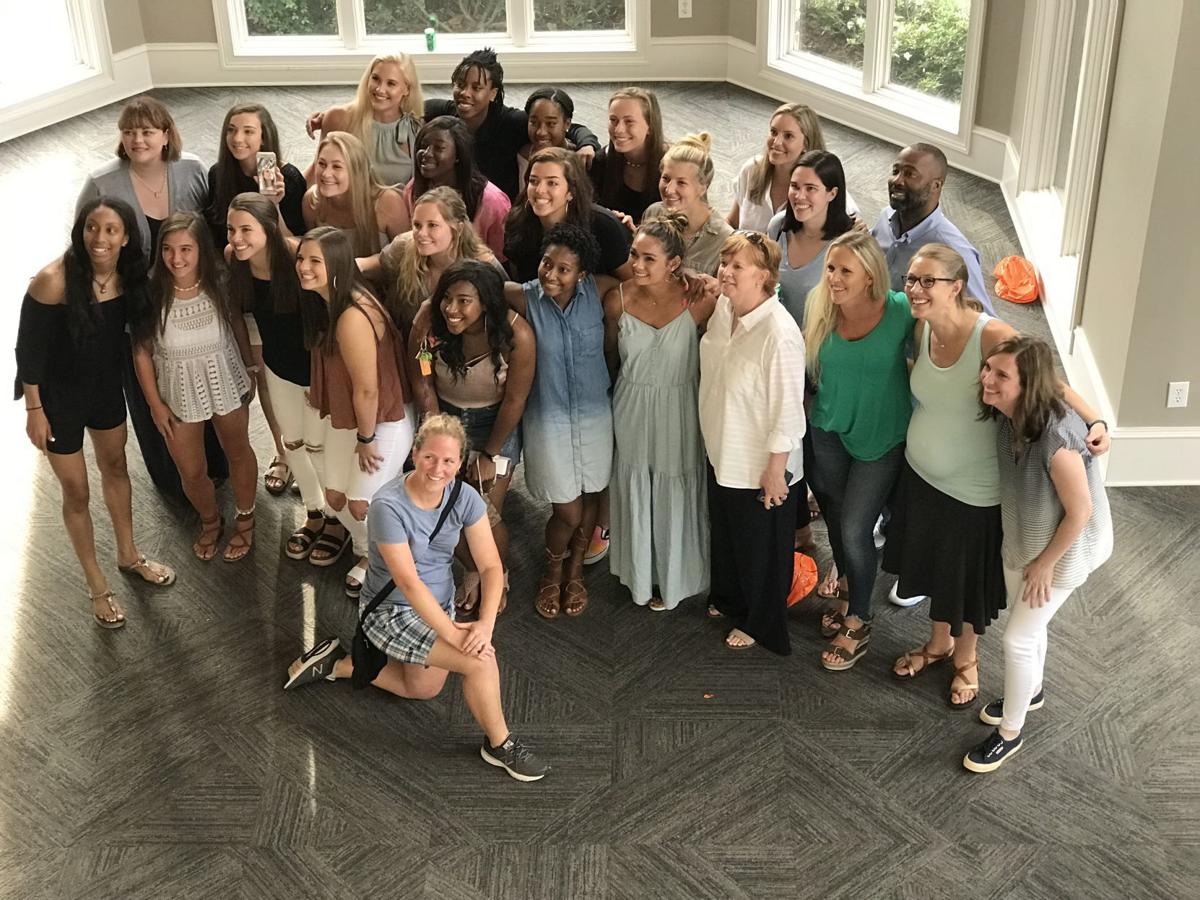 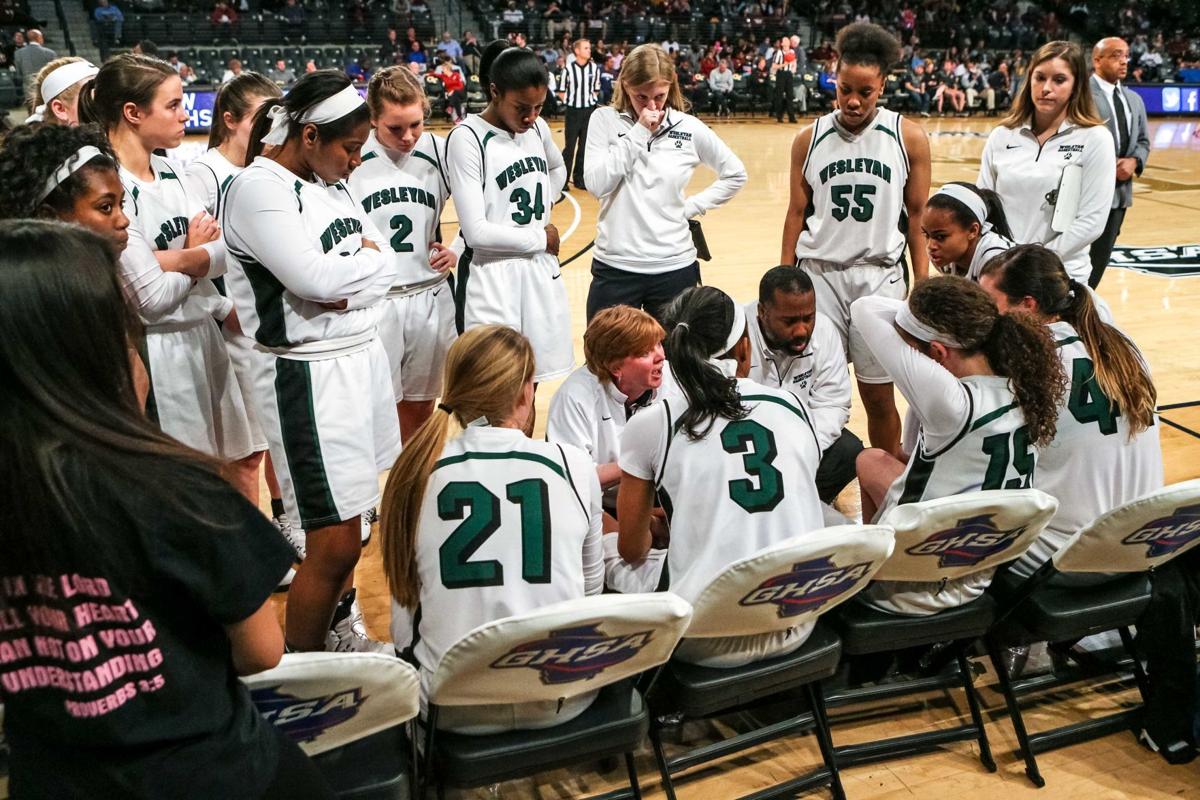 Jan Azar and Demetruis Frazier, kneeling middle, talk to Wesleyan players during the 2017 state championship game. Both coaches were hired by Hebron Christian in April. 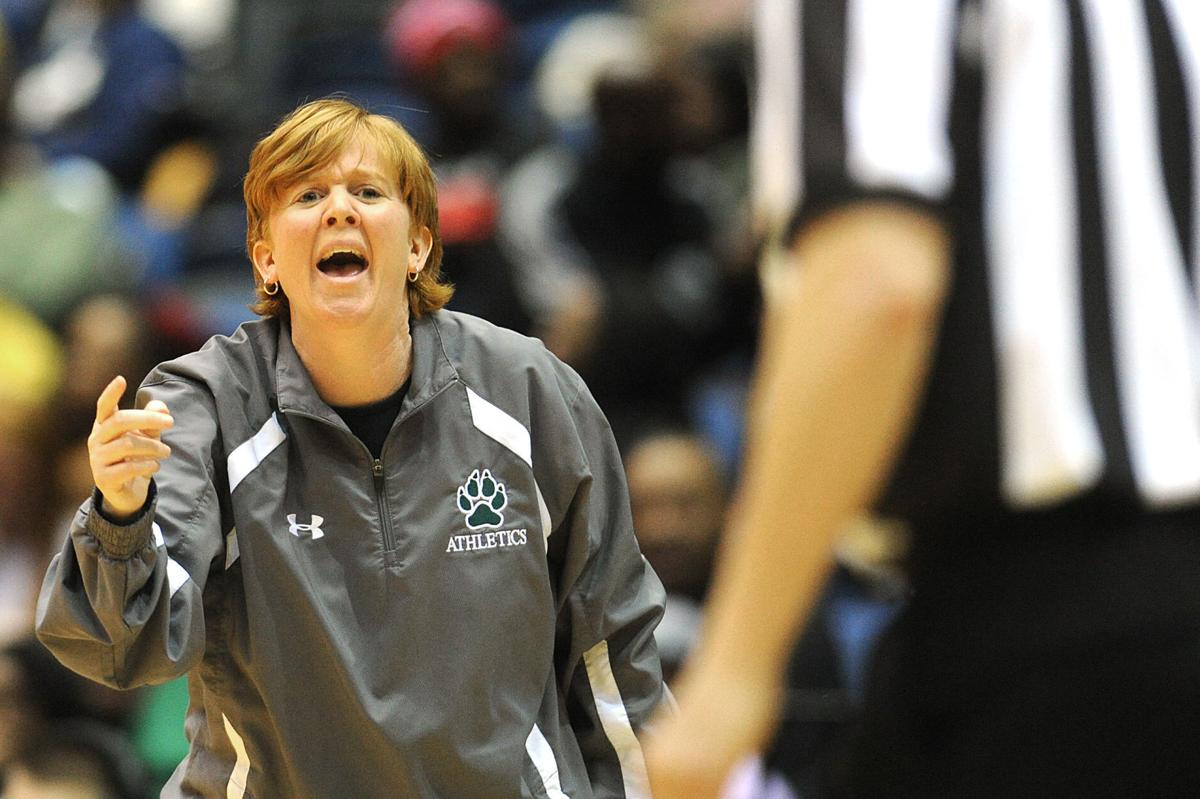 Jan Azar led Wesleyan’s girls basketball program to 13 state titles in her 22 years at the school. She stepped down in March and in April was hired to take over the program at Hebron Christian.

Jan Azar and Demetruis Frazier, kneeling middle, talk to Wesleyan players during the 2017 state championship game. Both coaches were hired by Hebron Christian in April.

Jan Azar led Wesleyan’s girls basketball program to 13 state titles in her 22 years at the school. She stepped down in March and in April was hired to take over the program at Hebron Christian.

“Also her favorite team,” Winter said with a grin at a gathering Sunday to acknowledge the vast contributions of Azar, her longtime assistant Demetrius Frazier and Carole Crighton, the school’s athletic operations coordinator.

Winter, quick with a joke, got serious a moment later and struggled to rein in her emotions.

“I was reading last night and found a good quote that describes Jan,” Winter said.

Looking at the words on her phone, Winter had to gather herself as her voice broke and tears welled in her eyes.

“Sorry,” she said. “A coach is a simple word that hides so many meanings within the five letters — a few of which are mentor, best friend, inspiration, role model, teacher, leader and sometimes even a parental figure. A good coach is much more than a coach. They are your biggest fan, loudest cheerleader.

“Coach Azar, I know to all these people who showed up, you’re more than just a coach. You really are there for us.”

Then the levity returned.

“I have the fondest memories of just being around you,” Winter said. “From sleepovers to you yelling at me and saying I’ll never play again.”

In the early days, Wesleyan was on the receiving end of some lopsided losses.

“We won a tipoff against this ranked team, Buford,” Winter said. “We scored and it was 2-0. They hadn’t been beaten all year — and she told me to stall.”

Azar, after 22 years and a state record 13 titles, left Wesleyan in March. She is taking over the program at Hebron Christian, bringing Frazier and Crighton with her.

A room full of people from their time at Wesleyan showed up Sunday, including dozens of former players spanning the entirety of Azar’s dynastic run. The Wolves have played in the state finals 18 of the last 19 years.

“Everybody is here today because Jan left a mark on you,” said Kevin Stipe, who’s daughter Katie played for Azar. “And when I say Jan, I mean by extension, Demetrius, Carole — their team. We so appreciate your dedication to excellence. We so appreciate how you have taught our daughters, and by extension our families. You have held up a standard of excellence we don’t see much in life.

“What I most appreciate about the way you have run this program for 22 years, is that not only do you uphold a standard of excellence, but you do so in a way that is incredibly classy.”

Will Jackson was there with Azar and Crighton in 1997 when there was only one permanent building on the campus in Peachtree Corners — Marchman Gym. Jackson was the football coach and athletic director for the fledgling private school.

“They are people of integrity,” Jackson said. “They are people who believe in doing things the right way. Wesleyan has never, ever, in 22 years, had a letter of reprimand from the GHSA, never had anyone declared ineligible, never had anyone suspended from participation. That’s not because of a winning record. That’s because these folks believe in doing things right every day.”

Jackson did think one day, early on, that Wesleyan was being put on probation. He told the story about getting a letter from the GHSA regarding the number of technicals being called on his girls basketball coach.

“I was appalled,” Jackson said.

He ducked out of his office before Crighton could tell him it was just a prank, which drew out the drama longer than intended. Crighton helped create the letterhead and said she never played another joke on him again.

If anyone could successfully pull off that kind of gag, it’s the invaluably knowledgeable Crighton.

“You see the banners across the gym that say Director’s Cup for outstanding program in sports, I think we’ve won nine of those in the last 13 or 14 years since they started the award, Carole Crighton is the heart of all of that,” Jackson said. “All of us have heard the analogy about the duck who looks so calm on the surface, yet underneath, there’s a lot of paddling going on. Well, most of that paddling has been done by Carole.”

Every bus, every official, every travel reservation, every eligibility form, every grade checked for every athlete to be able to participate in every sport at Wesleyan, has been taken care of by Crighton.

“The GHSA calls Carole to say ‘How do we do this?’ or ‘Would you please call so and so at the new high school and explain to them how to handle hardship applications?’” Jackson said. “She is a jewel. Nothing works at Wesleyan athletics if Carole Crighton isn’t turning the crank.”

The couch in Crighton’s office was a gathering spot for the players in the afternoons.

“You were always there for us, asking about our day or just checking on us,” said Jordan Frazier, Demetrius’ daughter and a former player. “You were always a light for us when our coaches were working our darn nerves.”

Crighton always kept the candy supply well stocked for whoever dropped by.

“Ms. Crighton, I know I took so many Jolly Ranchers,” Mikayla Coombs said with a laugh. “You were always there for me to talk to. Thank you.”

The 2017 McDonald’s All-American and Georgia Gatorade Player of the Year talked often to Azar and Frazier during her first two seasons at UConn. Coombs decided to leave the vaunted Husky program this spring and is headed to Georgia in the fall.

“Coach Frazier, you’ve been my second dad,” Coombs said. “You’ve been amazing for me. I’ve called you countless times, crying. When I was at UConn, you guys were always available to me. Thank you.

“Coach Azar, during my transfer process, I called you at midnight one night. You’re like, ‘Mikayla, I’m dealing with something, too.’ But you were always there and helped me though everything.”

Erin Hall’s introduction to Azar proved emblematic in many ways. The extended Hall family has been powering Wesleyan athletics since the beginning and Erin, a 2010 grad, was a deadly outside shooter. Her career mark for 3-pointers (250) still ranks second all-time.

“I was at one of Jenny’s games at Marchman,” Erin said. “My aunt Leslie came over and introduced me to Coach Azar. She said, ‘OK, let’s see what you’ve got.’ She took my sister, Lauren, and said I’m going to roll the ball out and whoever gets it, plays for me. Lauren dives on it, misses it, and I walked around and picked it up. Which, if you know, I was not one to dive or take charges or anything like that. I’m sorry.

Erin Hall is among a number of former players who have come back to join Azar’s coaching staff over the years, another indication of the lifelong effect she has on her players.

“I just want to say thank you to everyone,” Azar said. “I really hope we’ll all be able to continue to see each other. I have loved my years at Wesleyan. I wouldn’t trade my years at Wesleyan for anything in the world. I’ve met some of my most favorite people during that time.

“What I’m most proud of in all of you players is not what you did while playing for me. It’s what you’re doing now. You are a testament to hard work and being great at everything you do. Frazier, Ms. Crighton and I, we’re not done. We plan to create more of you running around in the world.”