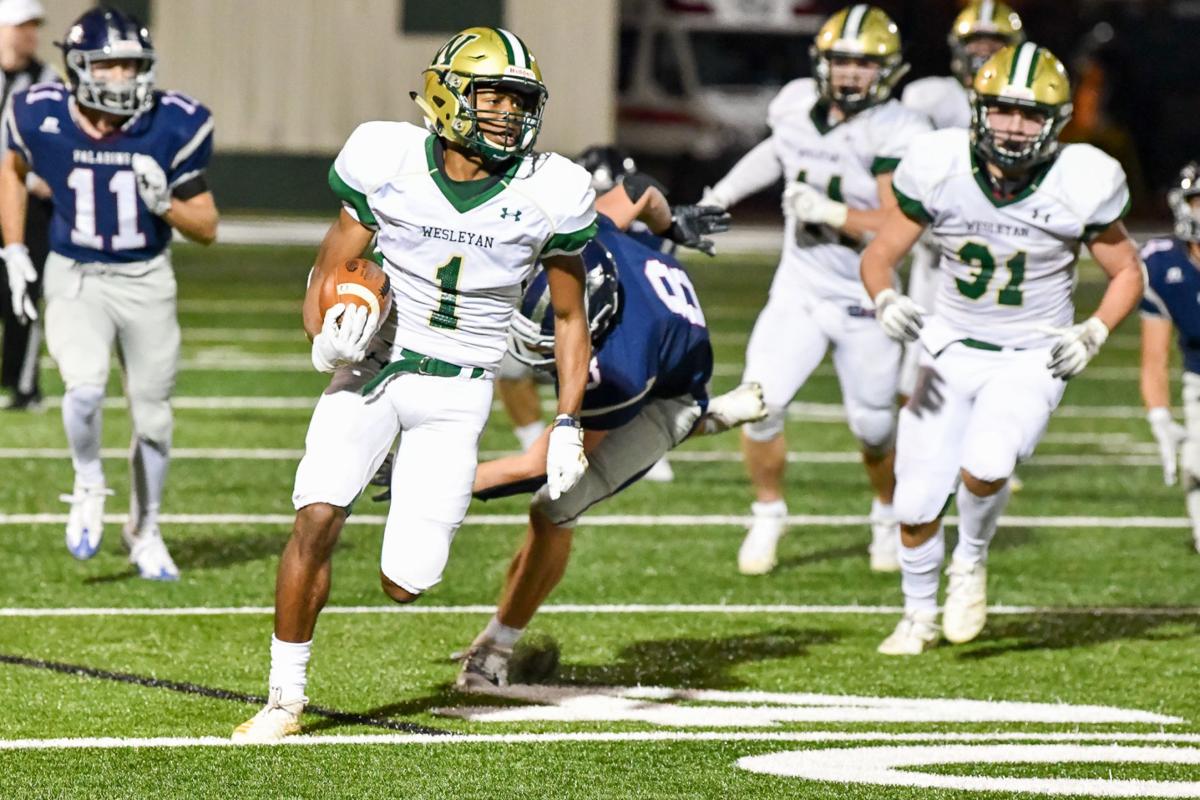 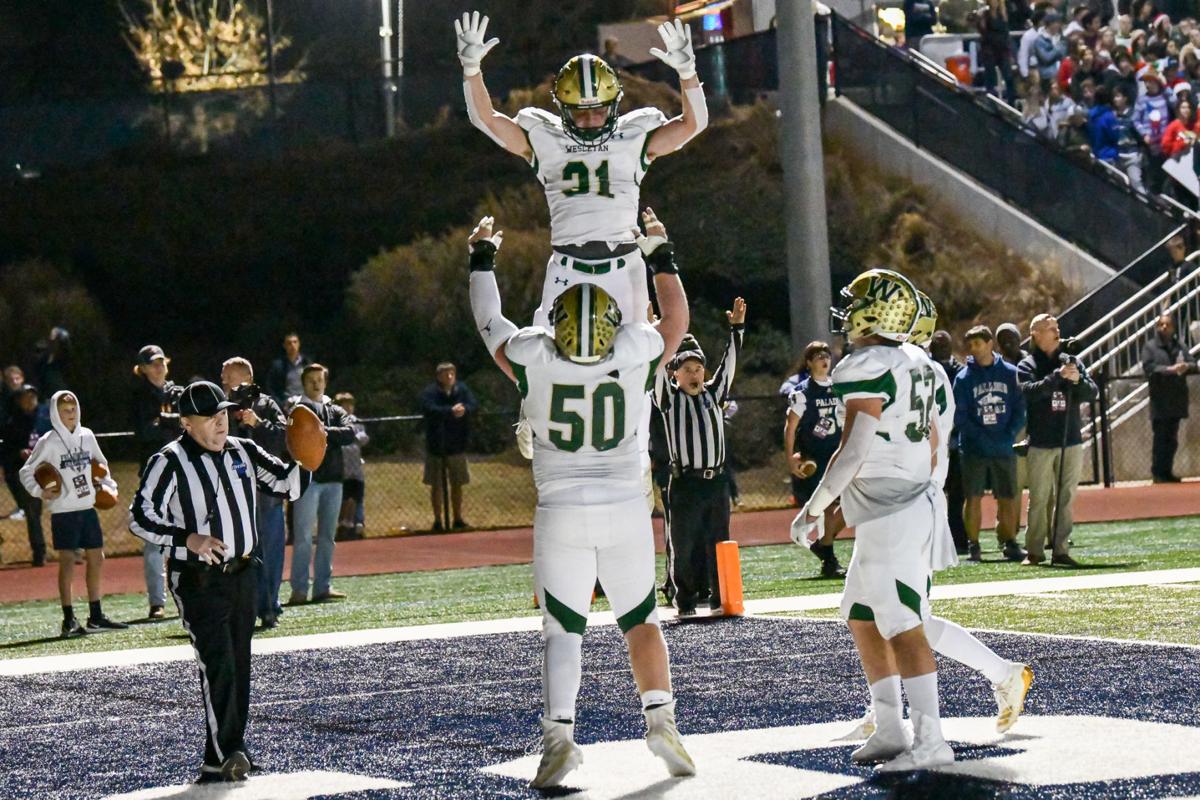 Wesleyan’s Griffin Caldwell (31) is lifted up by teammate Tanner Bivins (50) after a touchdown in Friday’s win over Fellowship Christian. 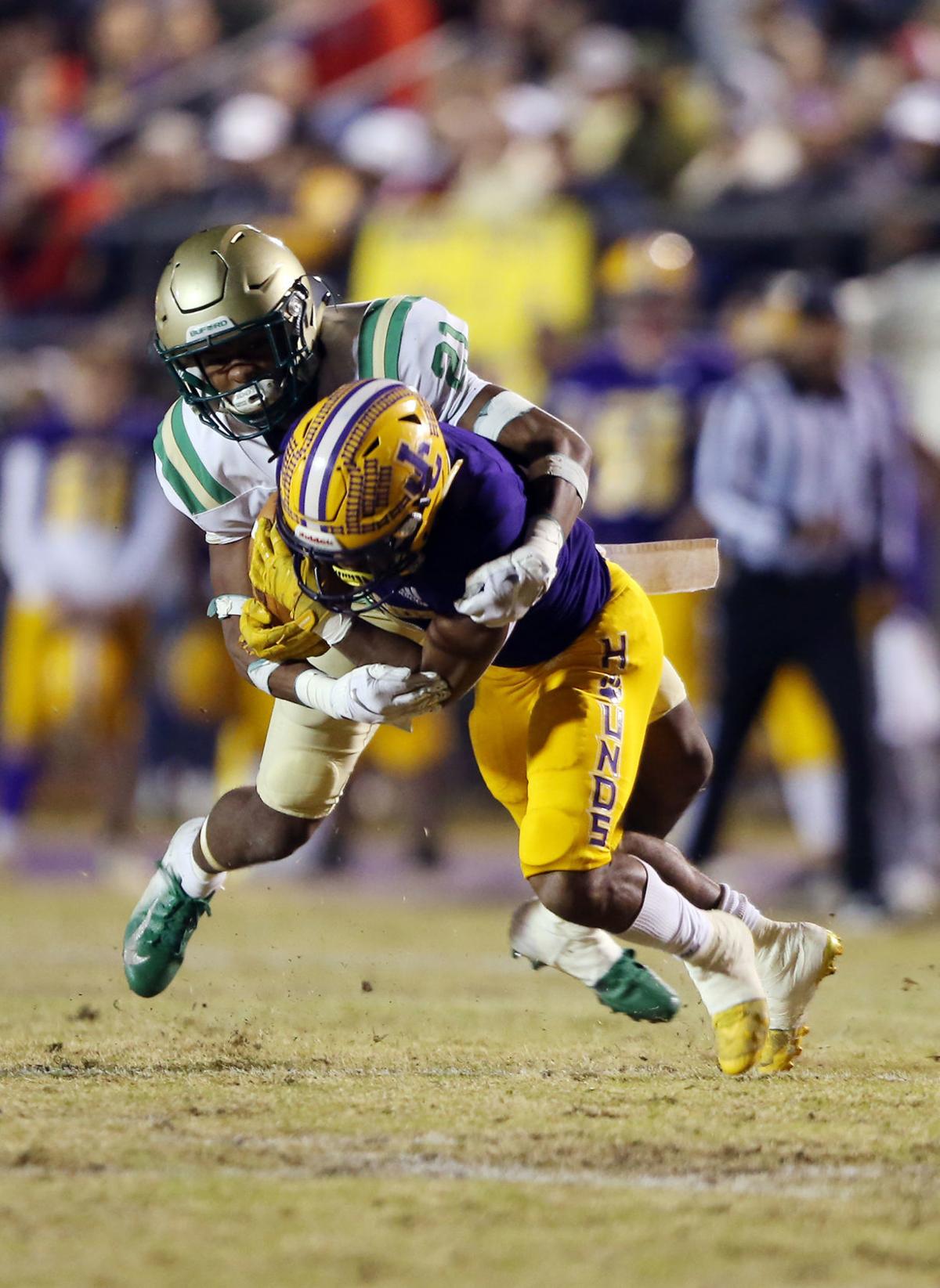 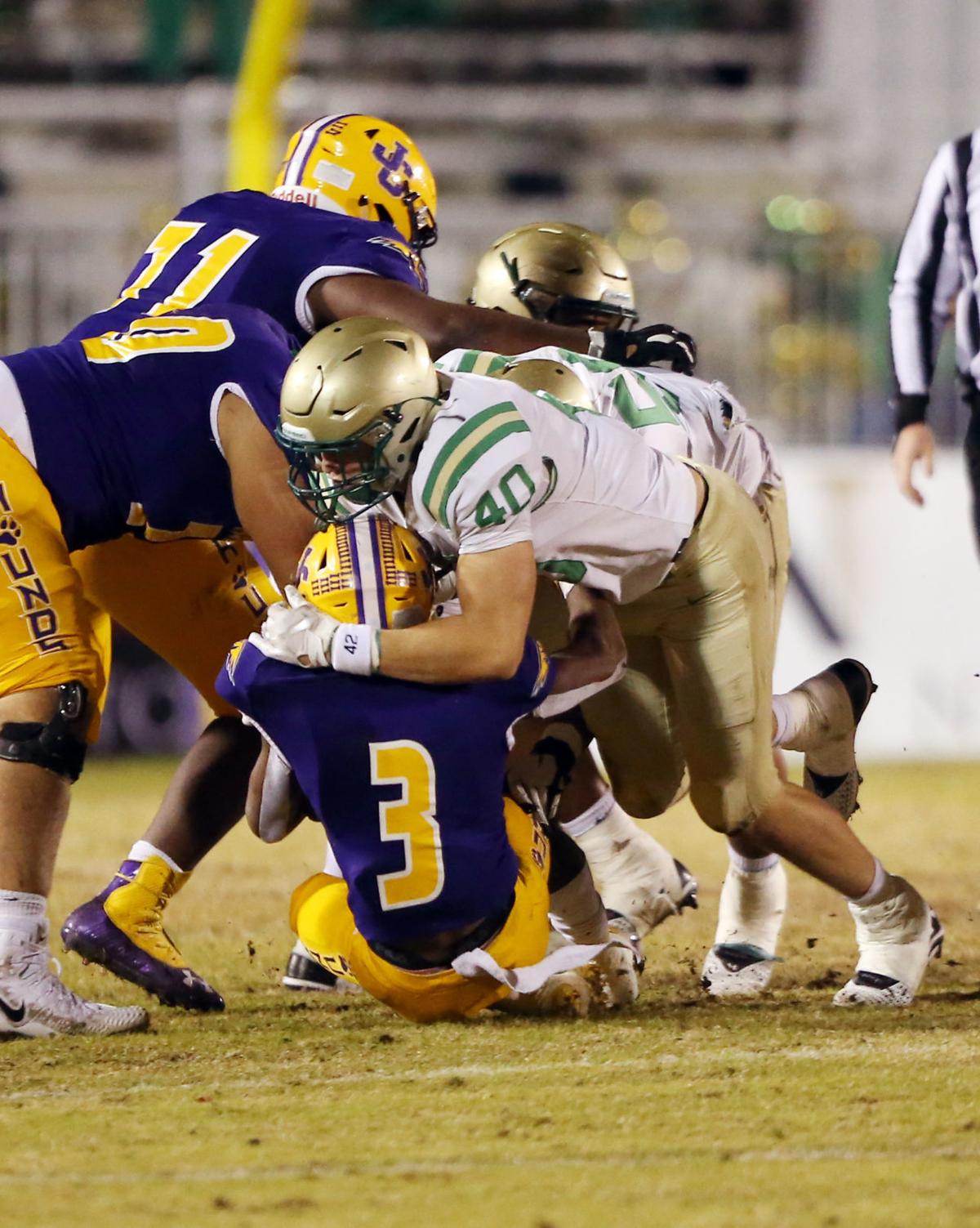 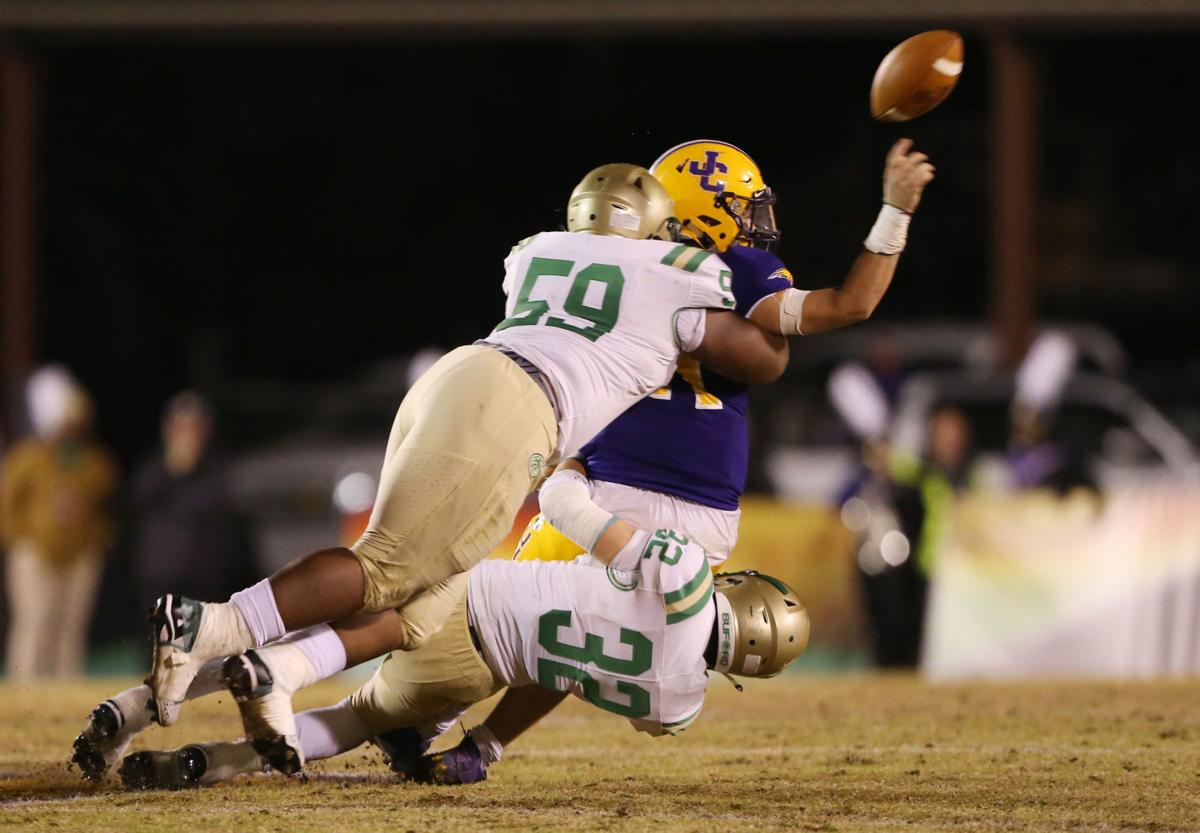 Wesleyan’s Griffin Caldwell (31) is lifted up by teammate Tanner Bivins (50) after a touchdown in Friday’s win over Fellowship Christian.

Friday was a good night for the Wolves. For the rest of Gwinnett County’s high school football teams? Not so much.

The county sported a 2-4 record in its six state semifinal games — a Gwinnett record for most teams in the Final Four — and only the Buford Wolves and the Wesleyan Wolves survived.

North Gwinnett, Parkview, Dacula and Greater Atlanta Christian saw their state championship hopes dashed, while Buford and Wesleyan are a win away from the ultimate prize. Both Wolves play their title games Friday at Georgia State, the new home for the state finals, with Wesleyan taking on Eagle’s Landing Christian at 10 a.m. and Buford facing Warner Robins at 4:30 p.m.

Title game trips are regular occurrences for Buford, but it will be just the second state finals appearance in school history for Wesleyan, which won the state championship in 2008 over favored Emanuel County Institute. The Wolves (11-2) will be an underdog again against region rival ELCA (12-1), which beat Wesleyan 54-17 on Oct. 4. ELCA has won the last four state championships in Class A Private.

“We are back in the state finals for the first time since ’08,” Wesleyan head coach Franklin Pridgen said. “None of our players and few of our coaches remember that year but they will never forget this one. Getting back is an honor and a privilege. It is not lost on me that most coaches never get this far just once, let alone twice. I am so excited for our team and our school community. We’ve got to find a way to win now.”

Wesleyan’s loss to ELCA was part of a two-game losing streak, which also included a loss to Holy Innocents’, that provided a turning point in the season. Pridgen’s team got it rolling from there and continued to build momentum.

As a No. 9 seed, it was one spot off a first-round bye. Concerned an off week would kill the team’s momentum, Pridgen was fine with taking on an extra game in the playoffs.

The Wolves are riding a surge of momentum that was evident in Friday night’s 56-20 rout of previously unbeaten Fellowship Christian.

“We got off to a really hot start back in August and early September and then we hit two brick walls in a row in Holy Innocents’ and then ELCA, lost both,” Pridgen said. “All the momentum we had gained from beating Meadowcreek, Chattooga and Prince Avenue seemed lost. We were at a tipping point, but our kids decided to stay the course. They chose to stand and fight instead of quitting on each other and the season.

“That is what makes me most proud. How they rose to the occasion and here we are. We’ve won eight in a row since. What a blessing in disguise it was to get that ninth seed instead of the eighth and the first-round bye. We never lost our rhythm.”

Buford was in a down cycle, at least by its own lofty standards, the past few seasons. The 11-time state champion (10 of those since 2001) fell short of the state finals each of the past two seasons, ending an astonishing streak of playing in the state championship game for 10 straight years.

First-year head coach Bryant Appling has the Wolves (13-1) a win away from another title. The opponent is Warner Robins (13-1), state runner-up the past two seasons.

Buford got there with an impressive semifinal victory, 29-0 over host Jones County. It was the third straight road win for Appling’s team, which won at Ware County and at No. 1 Carrollton the previous two rounds.

The latest victory came via a proven Buford formula — stout defense and the rushing attack. The offense racked up 299 rushing yards, including 108 and two touchdowns from Victor Venn, and the defense posted a shutout with six sacks of prolific Jones County passer Hunter Costlow. Evan DiMaggio had 2 1/2 sacks for the Wolves and Carlton Holley had two.

“That’s what we preached all week long,” Appling said. “We knew we had to play good defense against a good team that could put it in the air a lot. And then (offensively) we had to run the ball and keep control of the clock on a night like this.”

Hopes of an all-Gwinnett final in AAAAAAA were done in by a pair of talented teams. Marietta outlasted Parkview 42-31 in one semifinal, while North Gwinnett couldn’t overcome a big early deficit in a 49-28 loss at Lowndes.

In AAAAAA, No. 1 Dacula was outplayed from the start in a surprising, 38-7 loss to fellow unbeaten Harrison.

GAC had its chance to knock off Cedar Grove in the AAA semifinals, but lost 28-18 on the road.