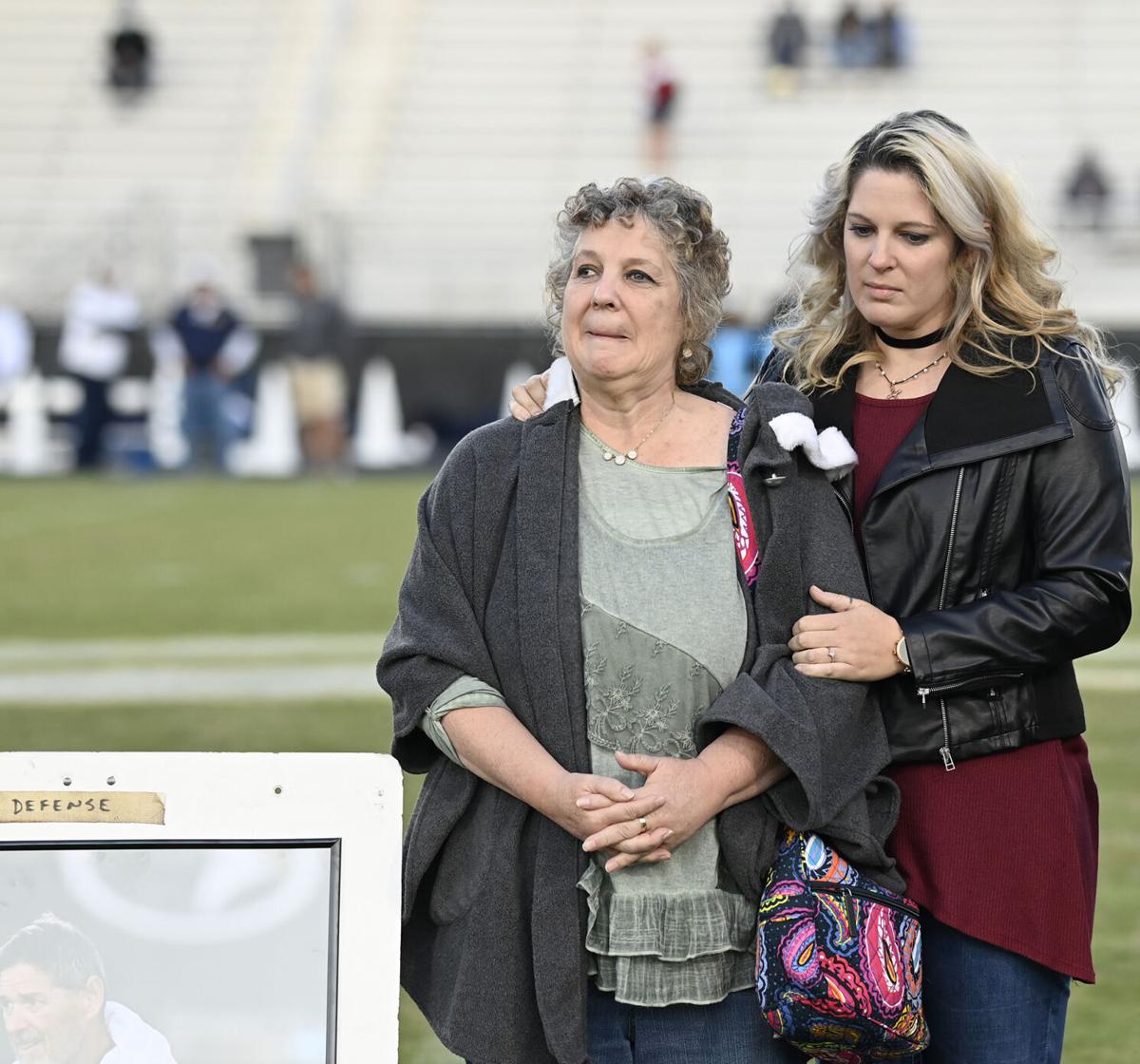 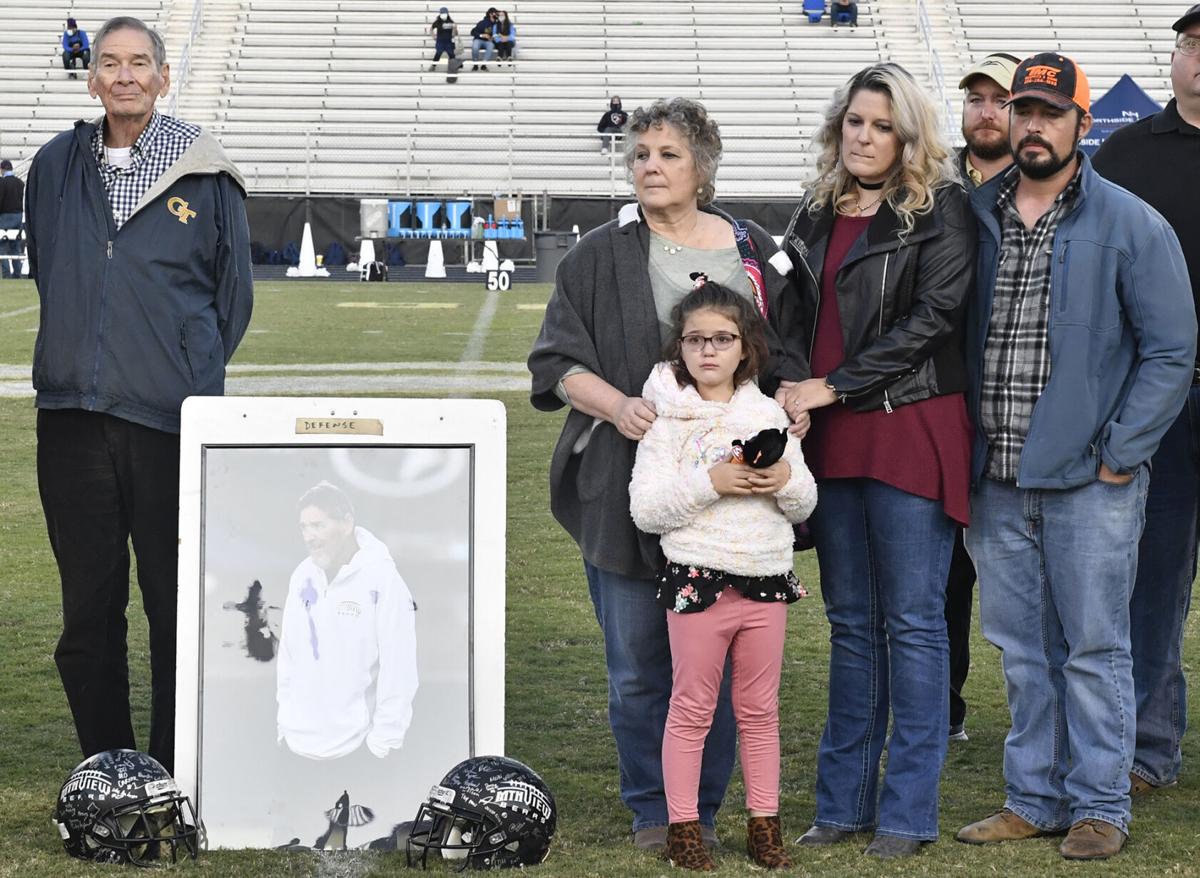 The family of former Mountain View head football coach Rob Kellogg, who passed away in April, during a ceremony to honor the late coach Friday night. 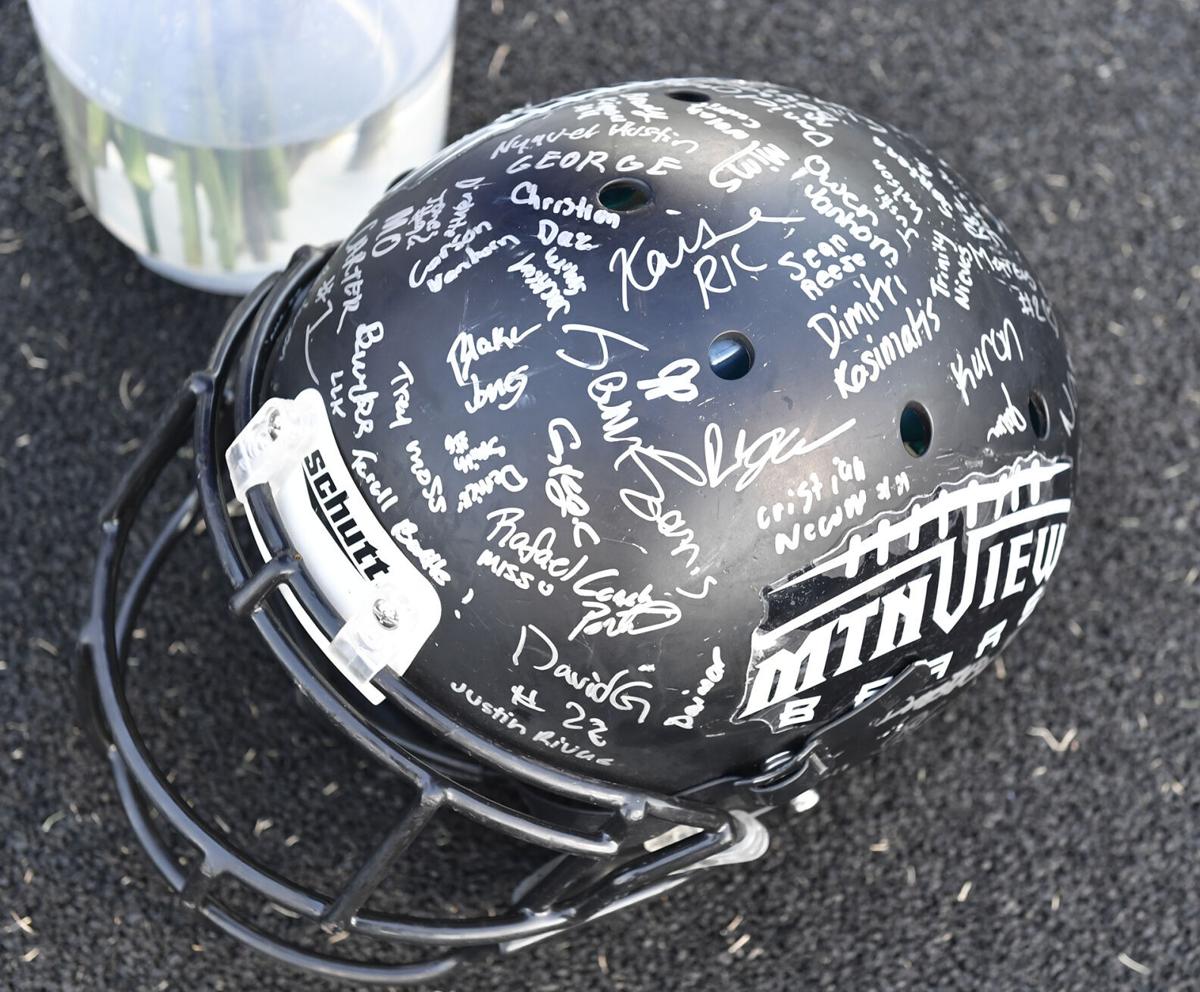 Mountain View presented helmets signed by current and former Bears players and coaches to the wife and daughter of former head coach Rob Kellogg, who died in April. 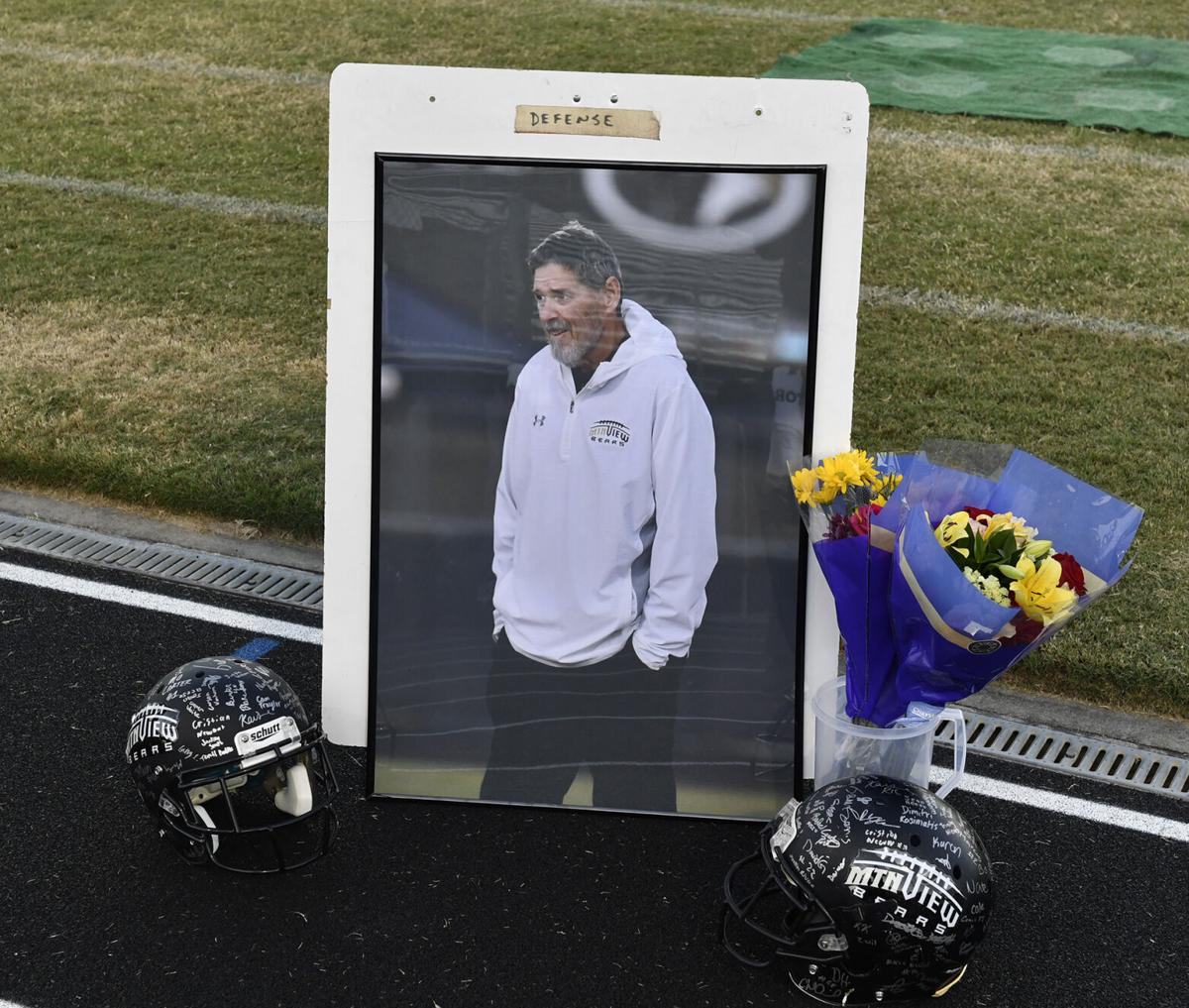 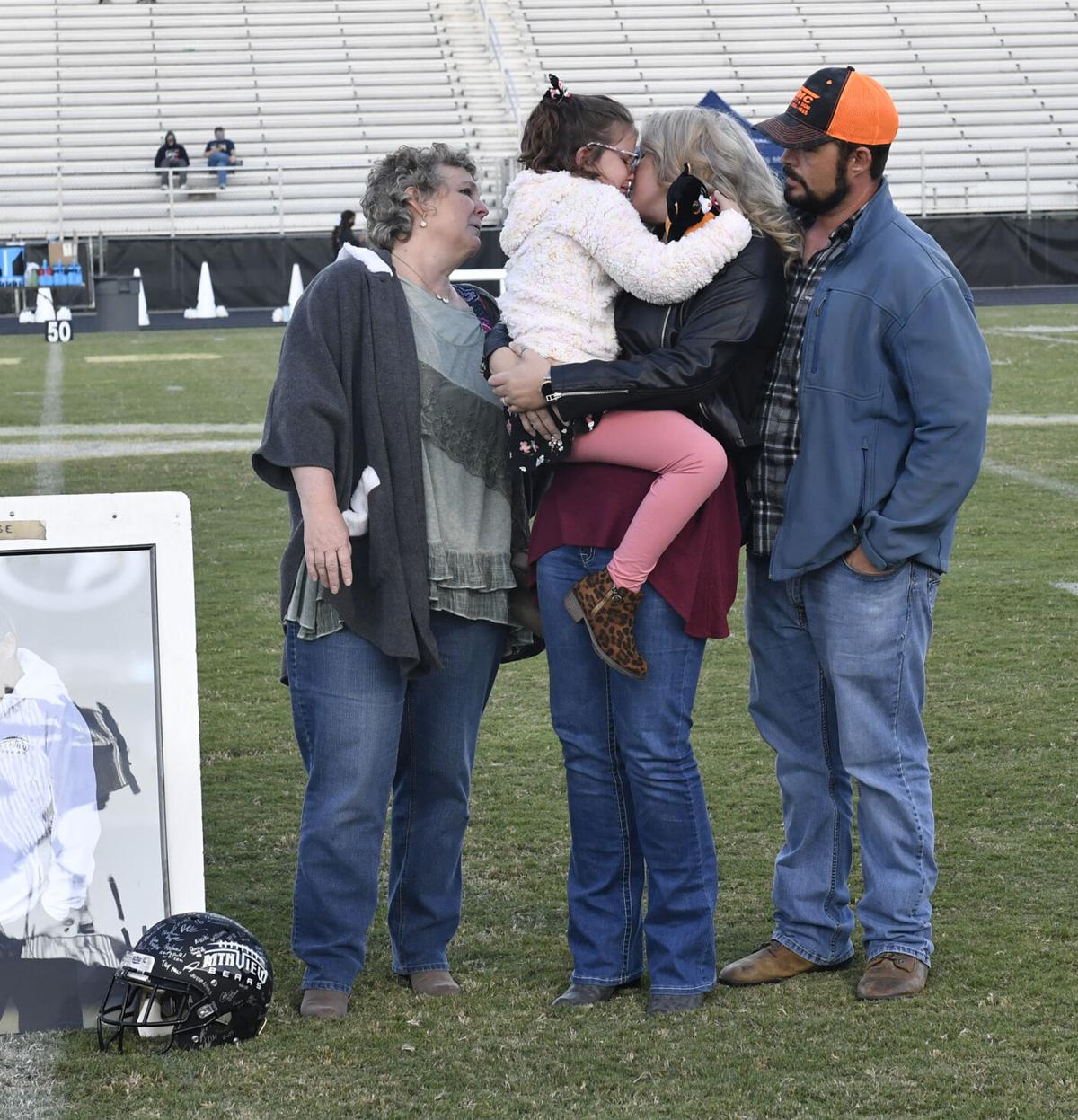 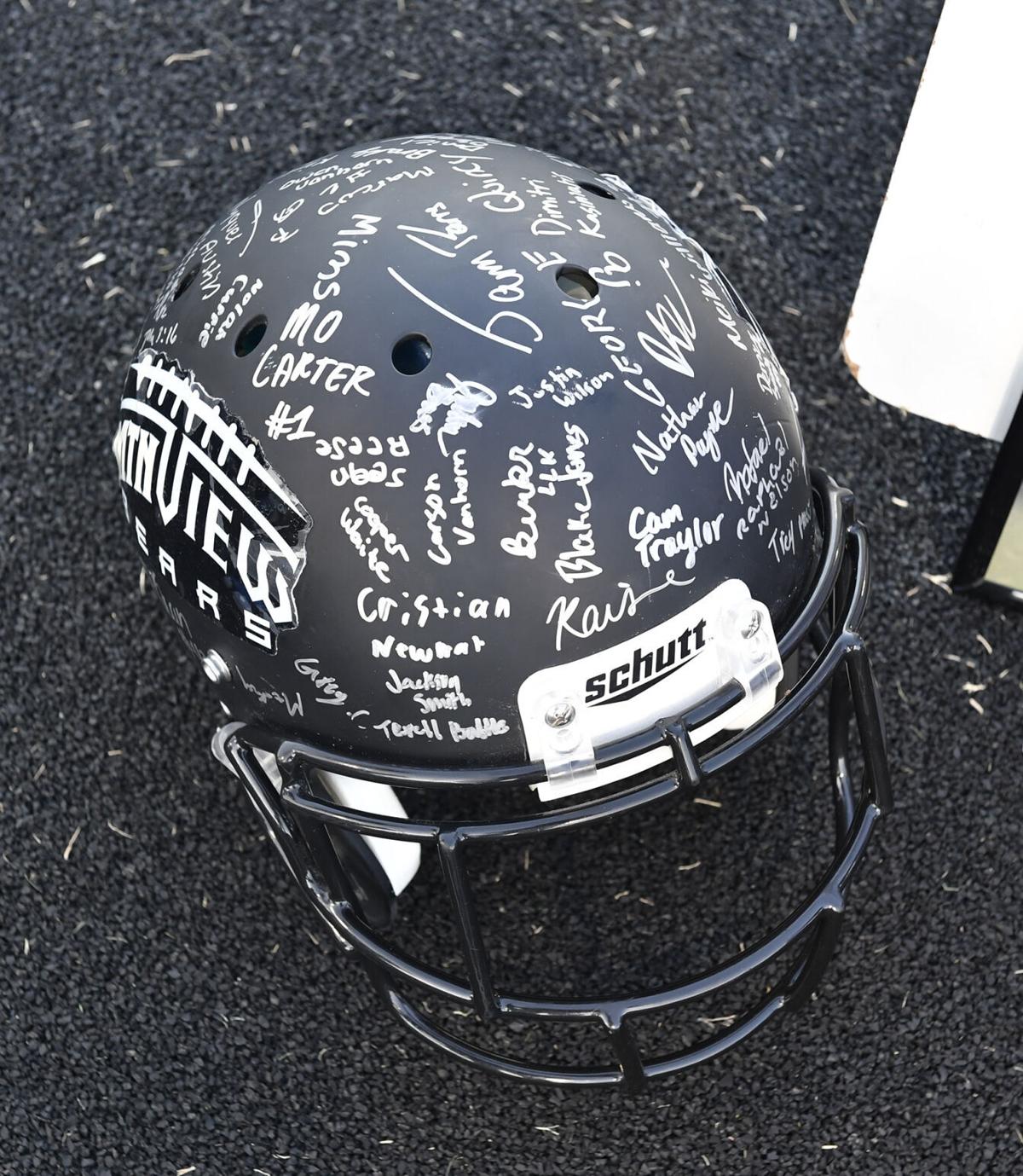 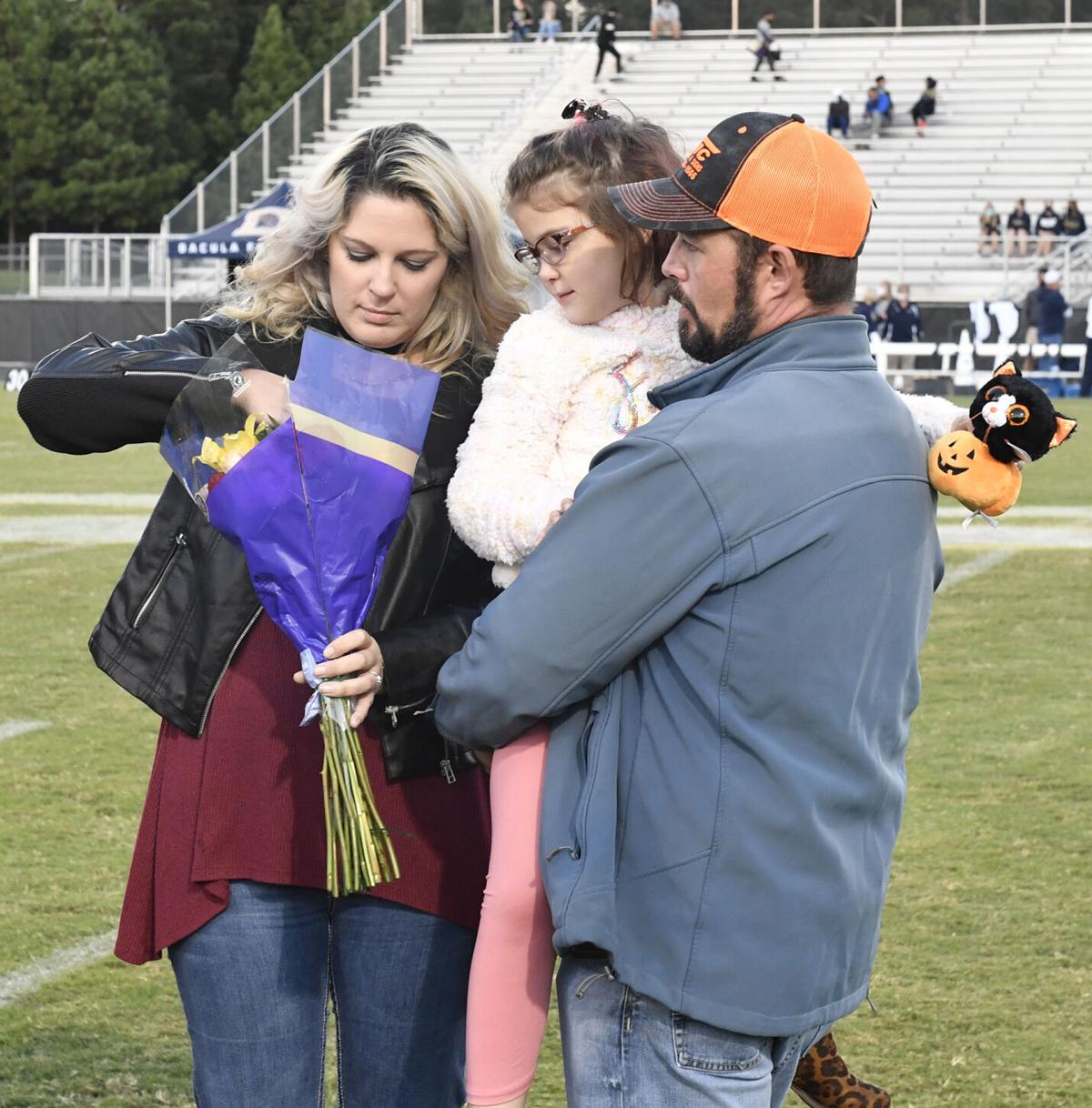 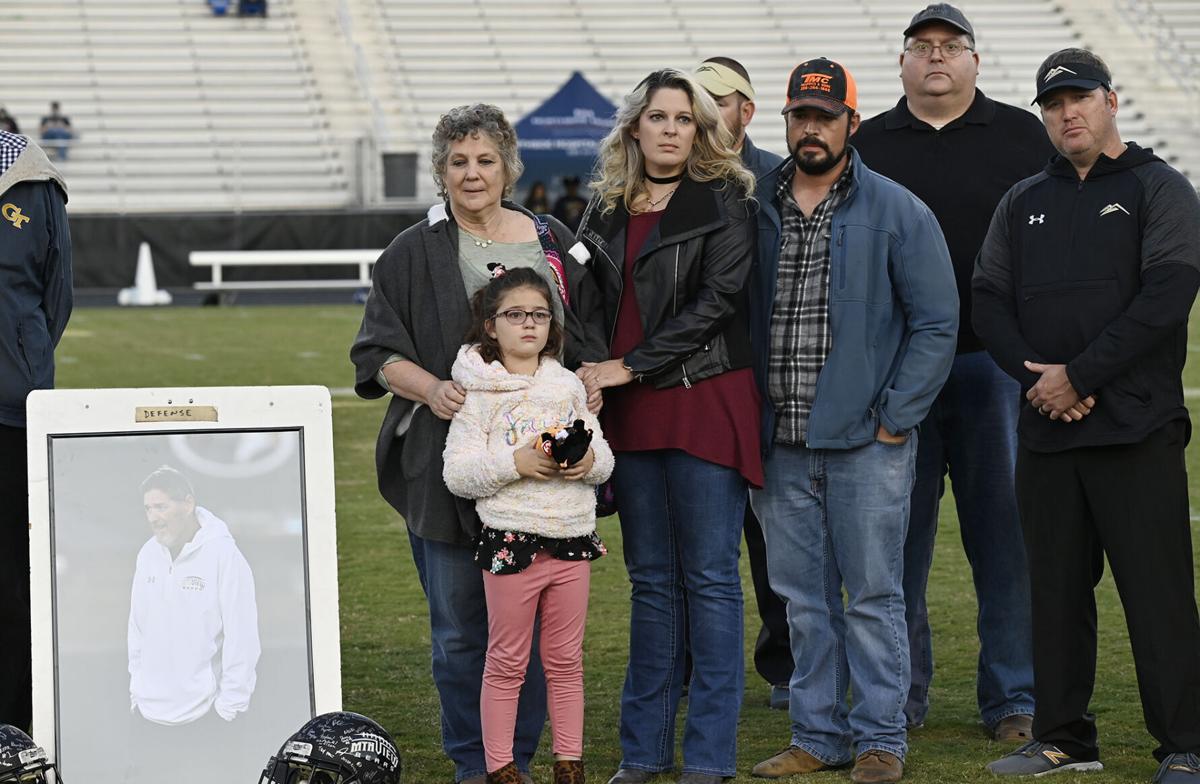 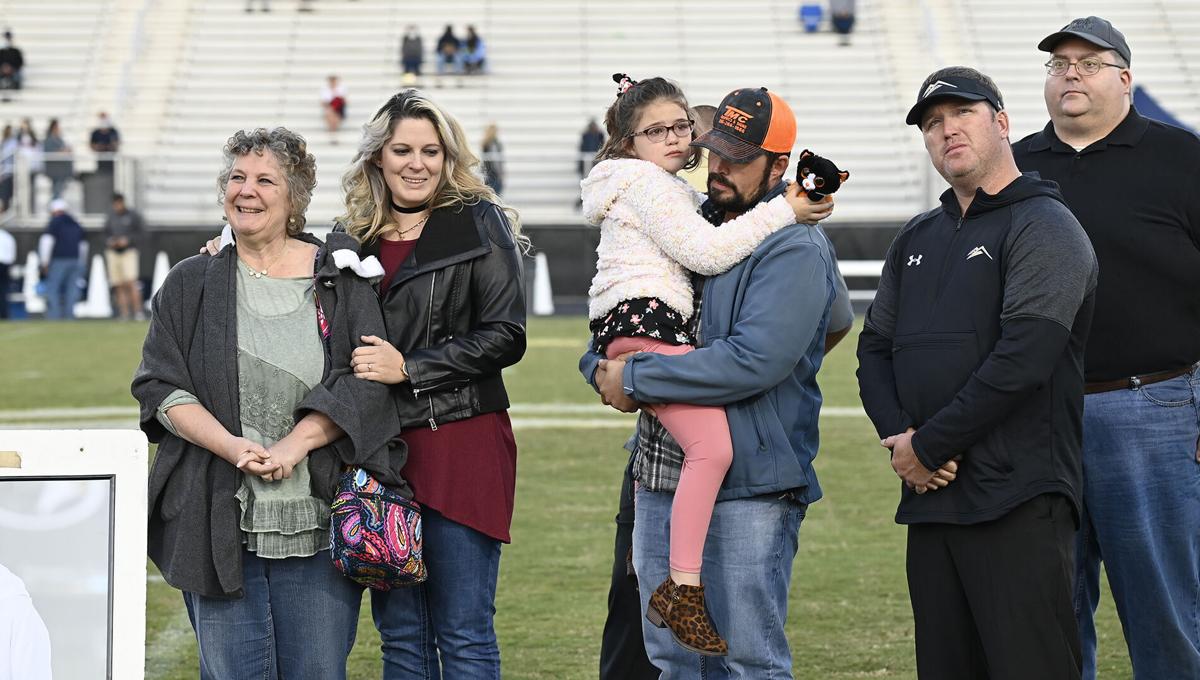 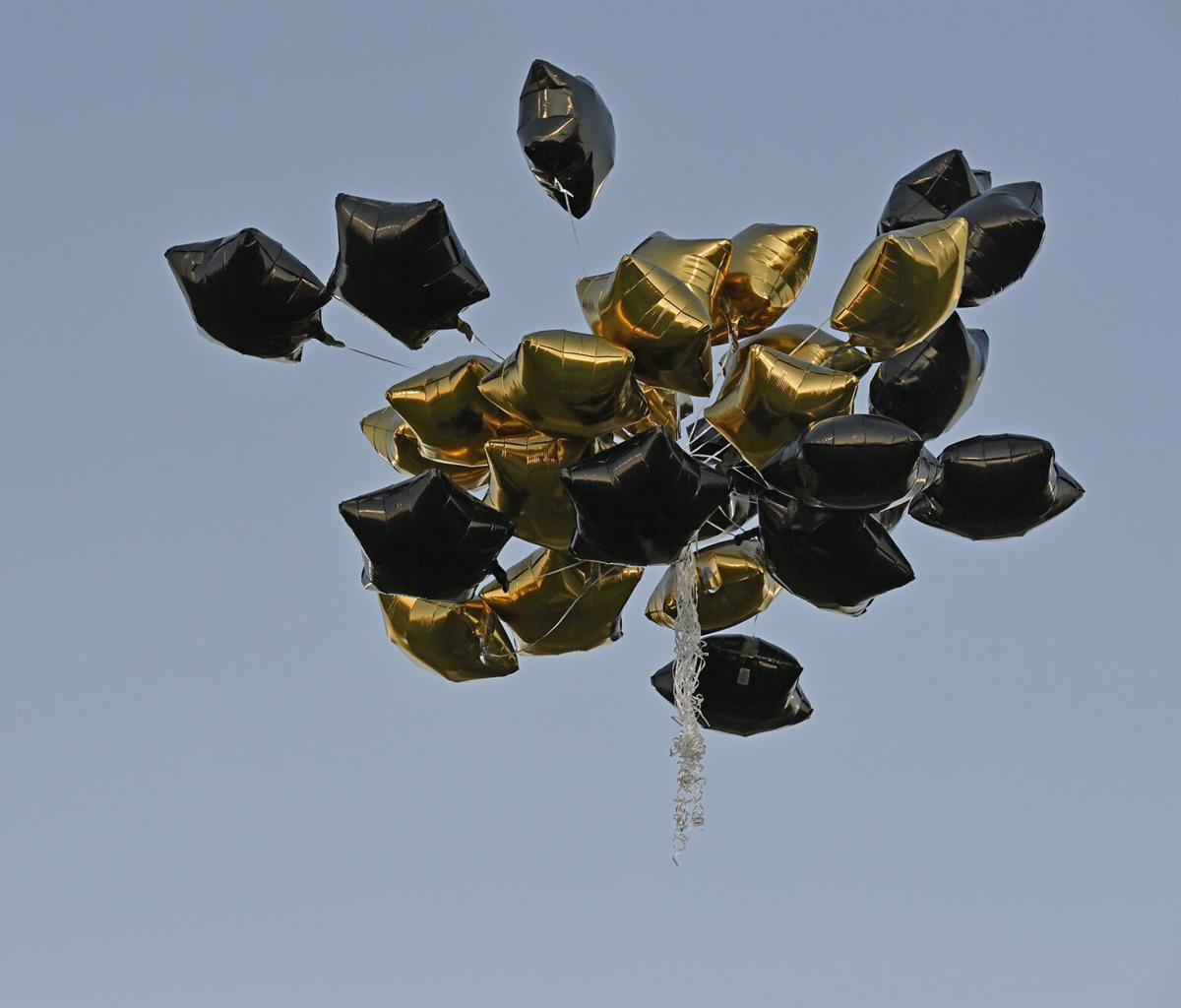 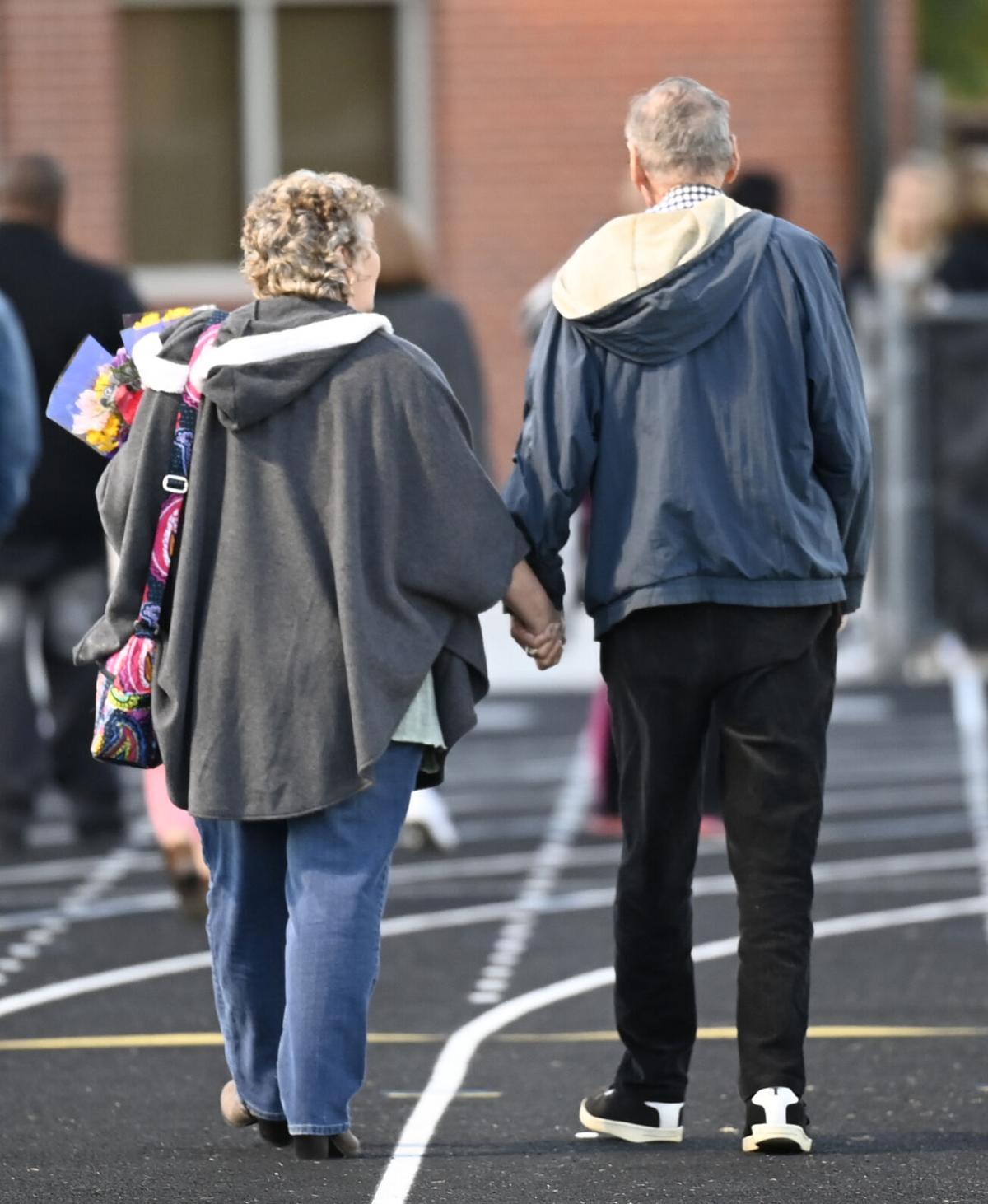 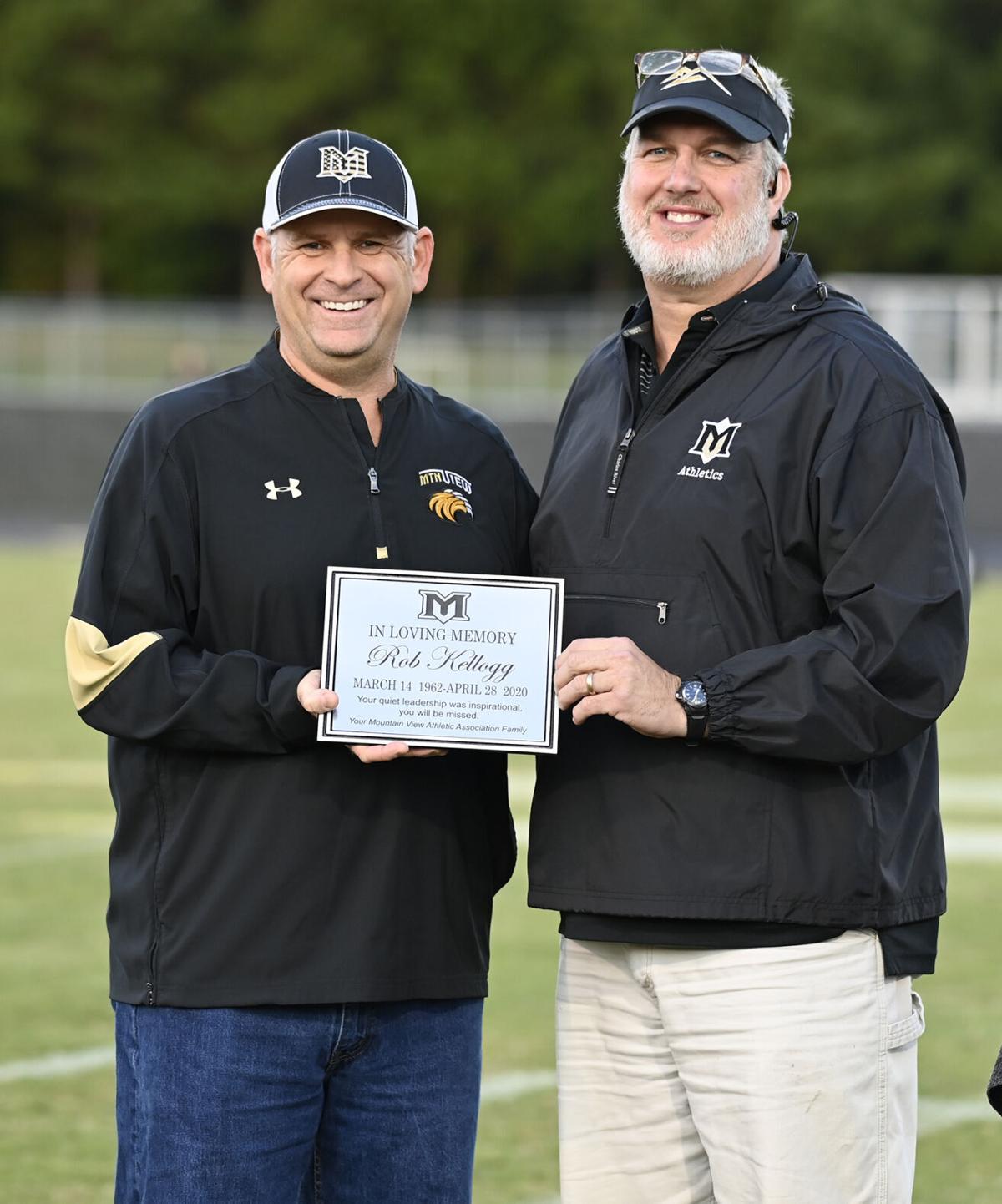 The family of former Mountain View head football coach Rob Kellogg, who passed away in April, during a ceremony to honor the late coach Friday night.

Mountain View presented helmets signed by current and former Bears players and coaches to the wife and daughter of former head coach Rob Kellogg, who died in April.

Kellogg, who led the Bears’ football program until he passed away April 28 at the age of 58, was honored with Rob Kellogg Night as family and friends paid tribute to the longtime educator. Kellogg’s wife Linda, his daughter Jessica, his granddaughter Kailin, his father Craig and other family members participated in a ceremony to recognize his service at the Lawrenceville school.

A plaque for Kellogg, to be displayed at Mountain View, was unveiled, and Kellogg’s wife and daughter received two Bears football helmets signed by current and former players and coaches. A release of balloons into the sky capped the event honoring Kellogg, who died after an extended battle with a diabetes-related infection.

Kellogg began coaching at Mountain View in 2015, serving as offensive coordinator for three seasons before being promoted to head coach in Feb. 2018. He led the Bears to the state playoffs each of his two seasons as head coach.

As Brookwood School’s baseball coach, Kellogg won a state title with the Warriors the year prior to his departure to Fullington Academy. He spent four consecutive years, from 2003 to 2006, as football coach at Fullington. His 2007 Fullington baseball team also won another GISA state title.

His first GHSA job was as an assistant at North Hall and then he was offensive coordinator at Gilmer before he was part of Nick Bach’s first coaching staff at Mountain View in 2015. The Statesboro native played baseball at Abraham Baldwin Agricultural College and graduated from Georgia Southern University.

The following are thoughts shared by community members during the ceremony:

♦ “Kellogg was my go-to for words of wisdom. No matter how hard my day was, he always had great words of wisdom to help guide me back to reality and what is important in life. I miss him so much.” — Social studies teacher Shiloh Arp

♦ “He was always a positive man who did not say a lot, but when he did say something it was usually pretty important.” — Football coach chaplain Billy Shirley

♦ “In my life I have worked with many coaches and made many friends during the process and I am honored to include Coach Kellogg on that list. When I think of Coach Kellogg, I think of dozens if not hundreds of conversations that have helped me shape who I am as a coach. I can say I am truly blessed to have worked with him and for him. I want to thank his family, for allowing me to be mentored by their husband, father and grandfather. Coach Kellogg, you are truly missed.” — Assistant football and wrestling coach Mike Bowbliss

♦ “Coach Kellogg was the kindest and most sincere of individuals. I had the pleasure of working with Mr. Kellogg for seven years. He was always a gentleman with kind words, and a trusting face. He has been truly missed.” — Teacher Melanie Riddle

♦ “Coach Kellogg was a genuine, wise and quiet leader in our building. He loved his players and coaches and would do anything for them. He would do absolutely anything that we asked of him for Mountain View High School. He is incredibly missed.” — Principal Keith Chaney