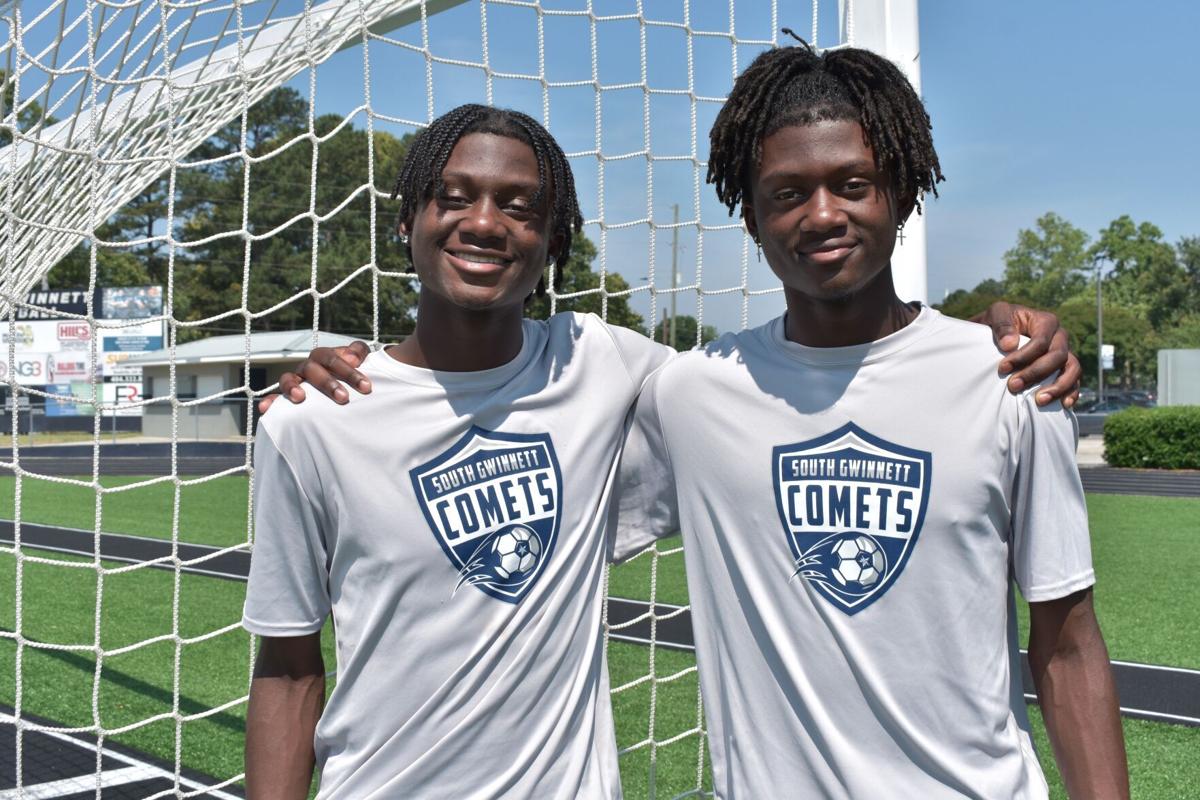 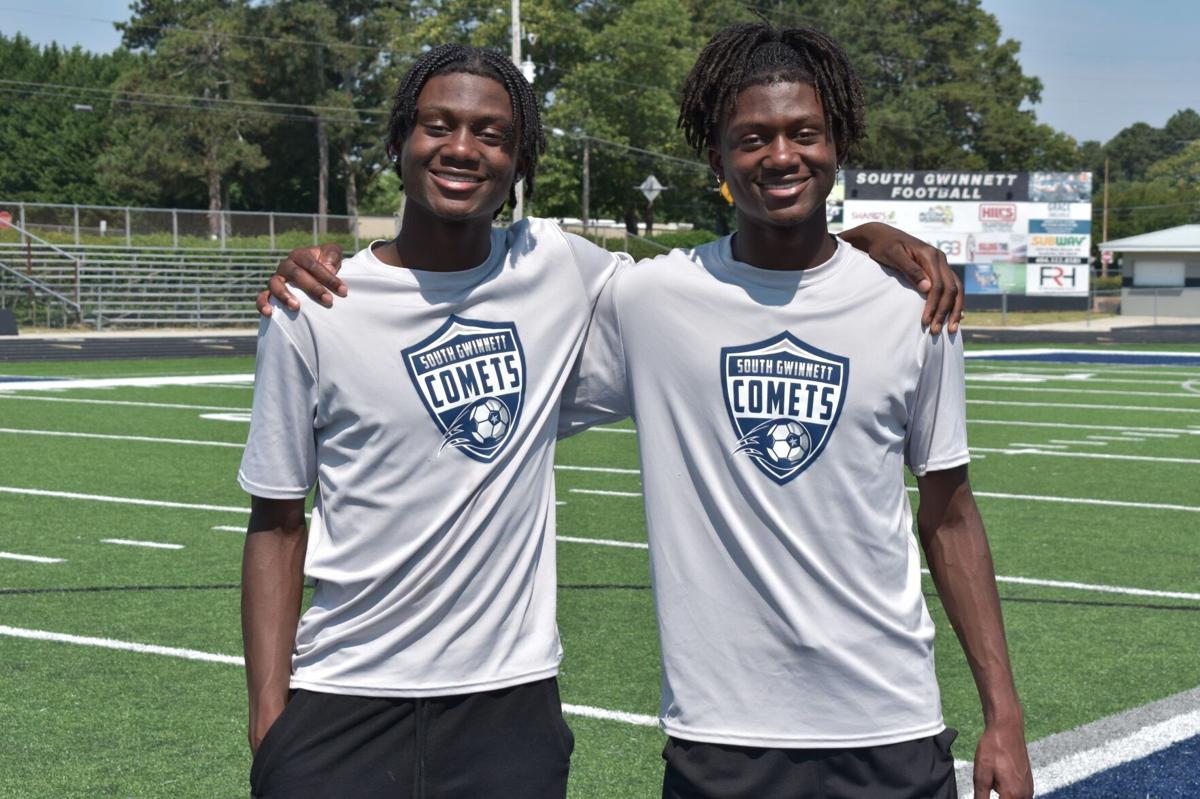 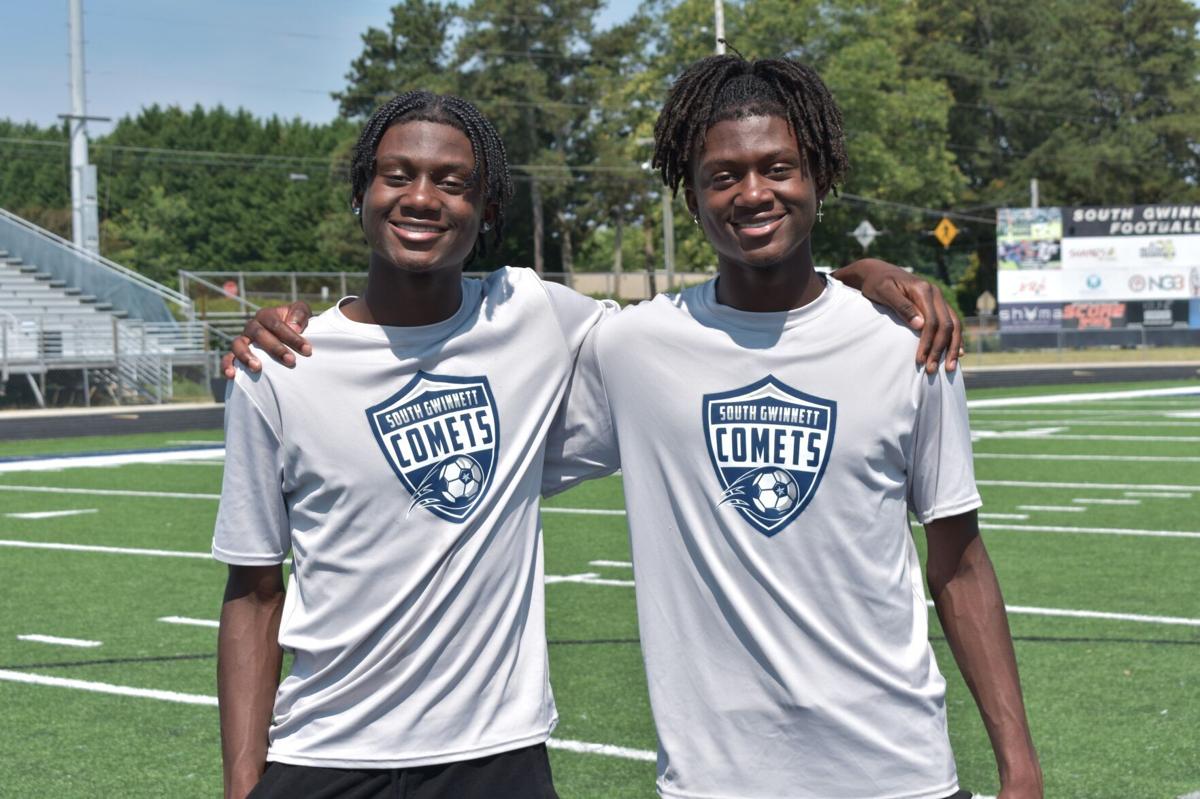 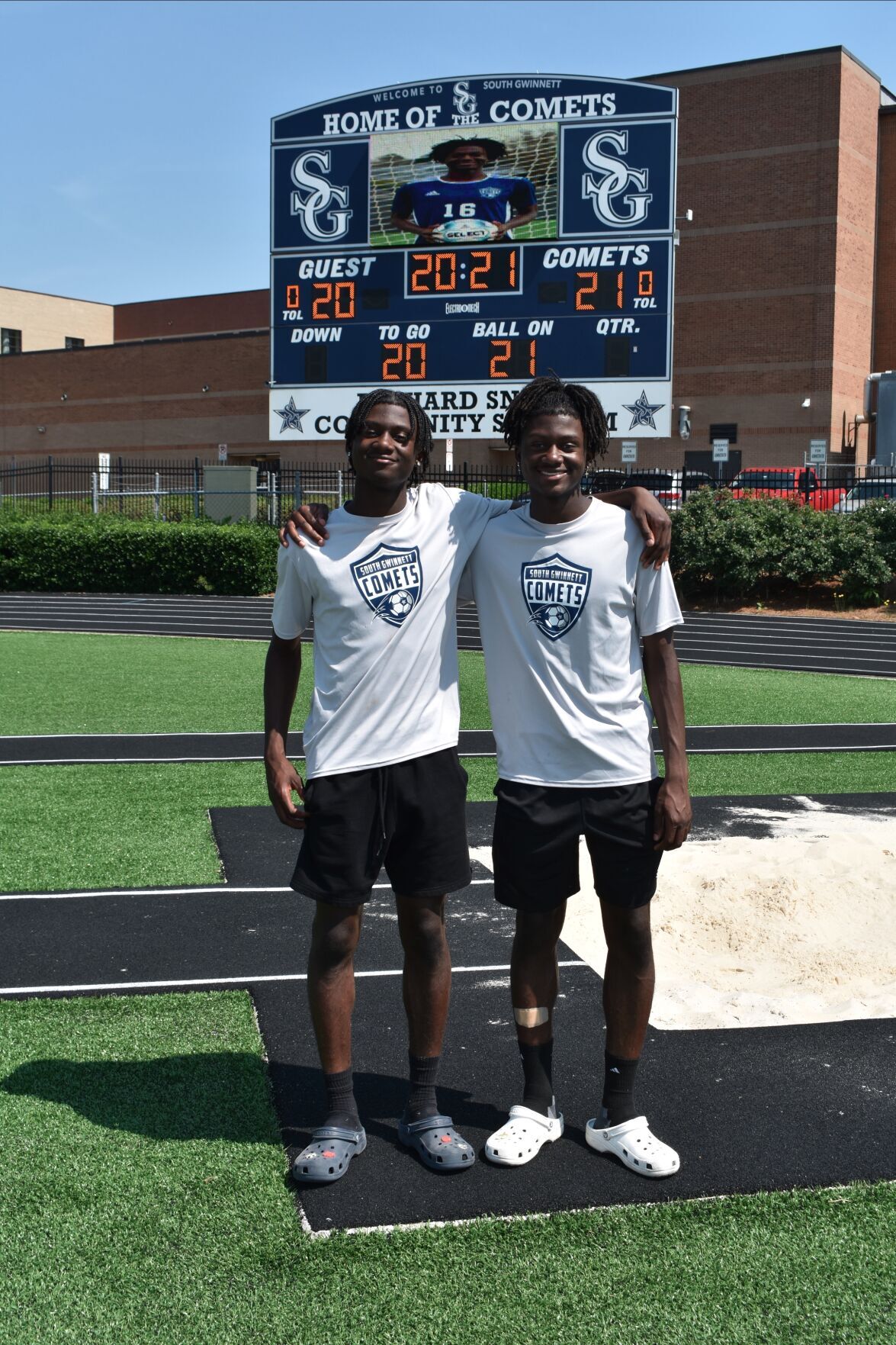 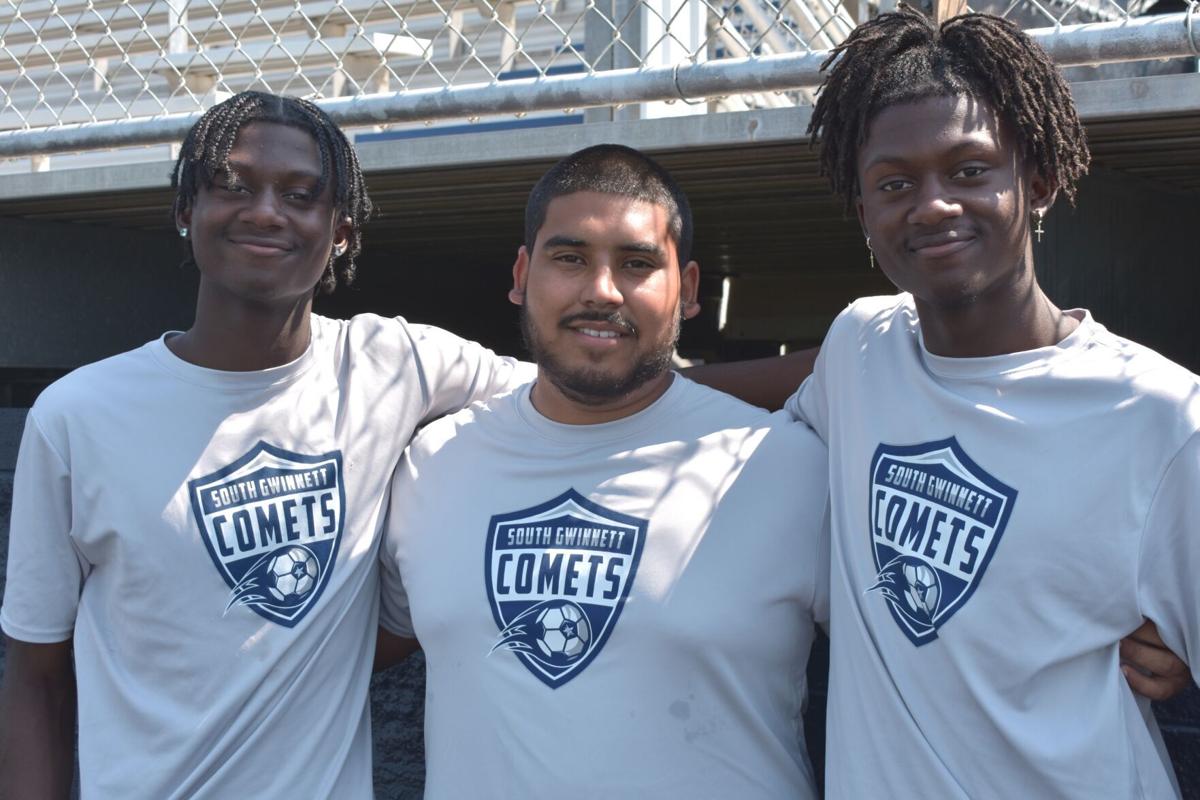 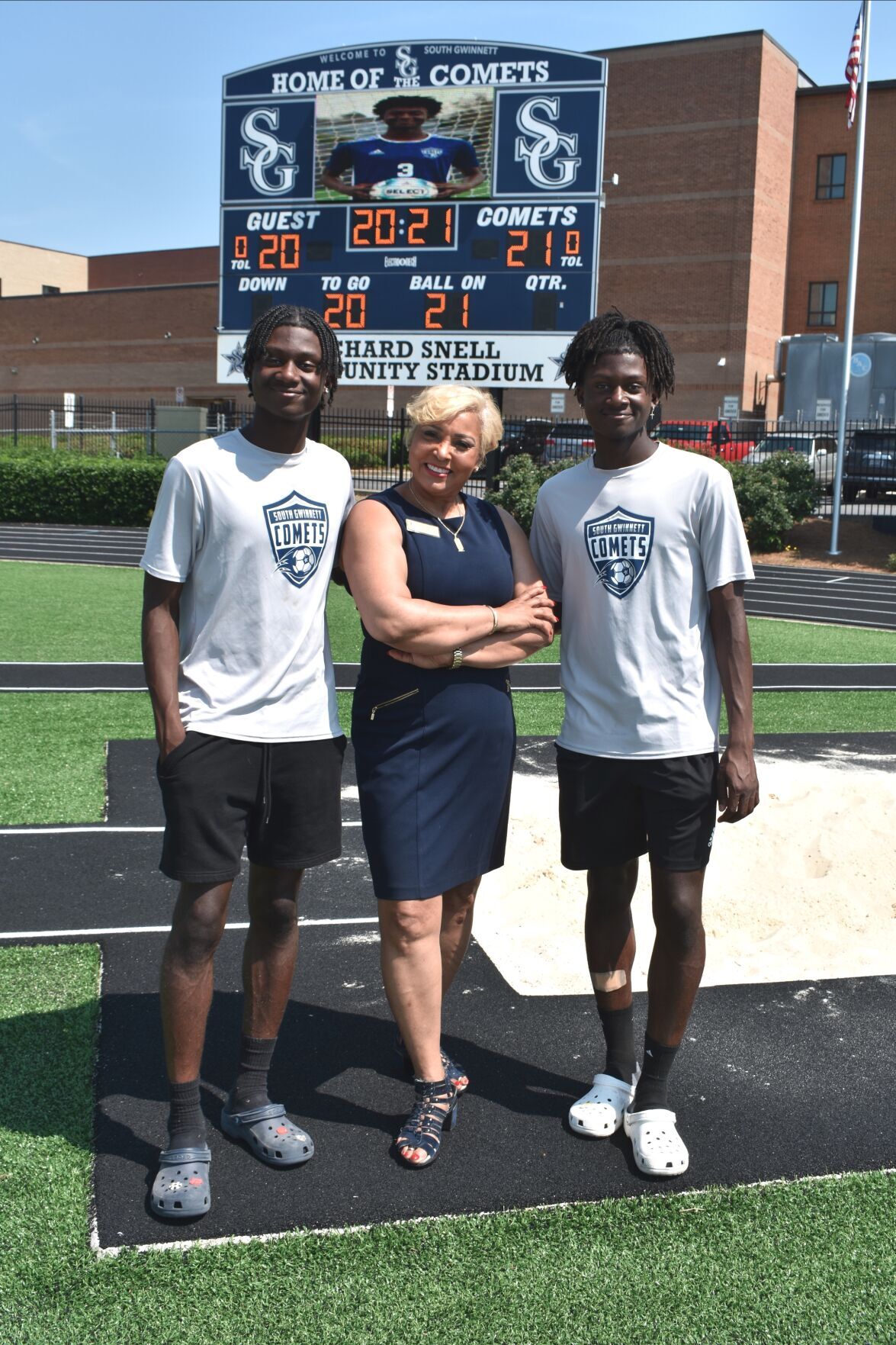 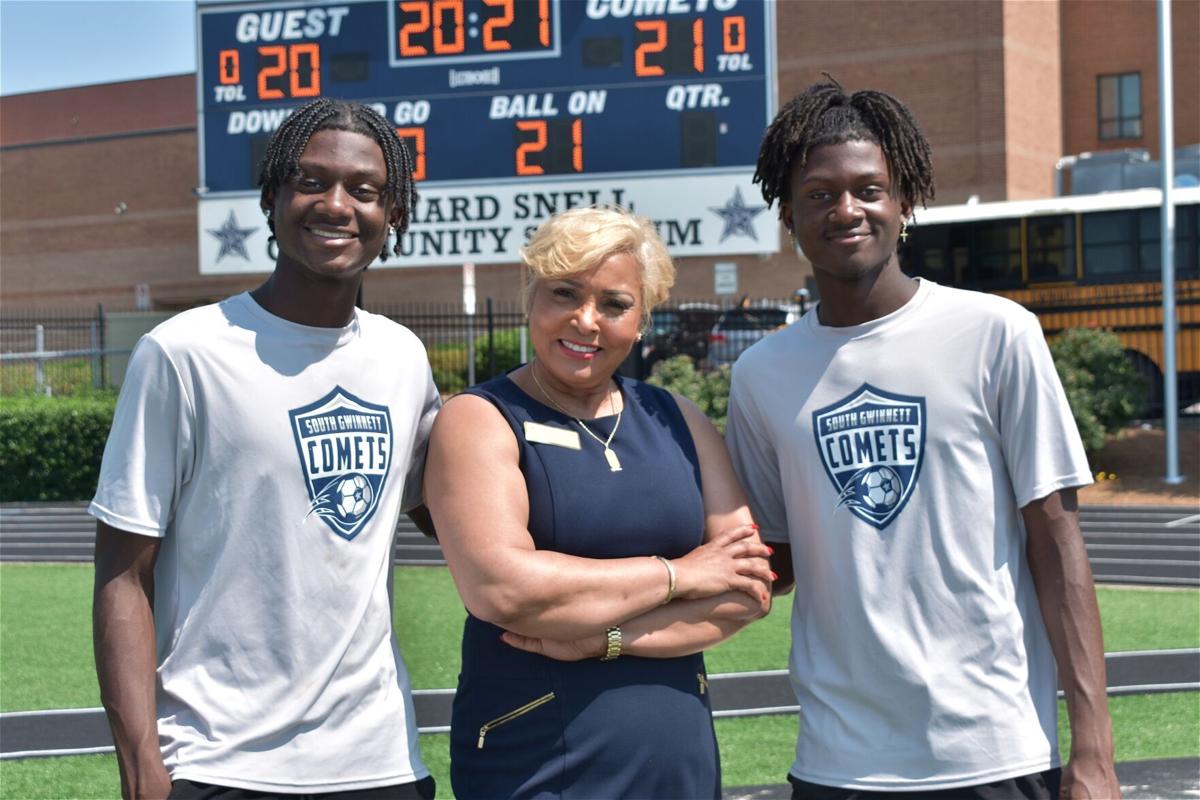 Years ago, Kadeem and Sekou Agard lined up side by side on the soccer field.

The twins, stars in the attack for South Gwinnett’s Class AAAAAAA Final Four team in 2021, didn’t start out their careers as offensive playmakers, instead manning the defense for their GFC club teams.

“At about U10, we were both center backs,” Sekou said. “Our coach said one of us needed to go to forward, so he picked (Kadeem) unfortunately. It’s been like that since about U11.”

Since those days, Kadeem has developed as a striker, while Sekou has excelled at center back for their club soccer teams.

“It was cool because you had twins at center back right next to each other,” Kadeem said of their early youth soccer days. “It would have been kind of cool to see what that would look like now.”

The Daily Post Co-Players of the Year for boys soccer continue to be separated by their positions in club play — Kadeem at striker and Sekou at center back — and that will continue at the college level as teammates at Mercer. Aside from their sophomore season at South, the Agards have been linked more directly in the attack with Kadeem at striker and Sekou in the midfield.

The results, particularly this season, were impressive.

Kadeem had 43 goals and 12 assists, earning Gatorade Georgia Player of the Year, as well as Gwinnett Goal Club and Region 4-AAAAAAA Player of the Year, honors during South’s historic season. Behind him in the central midfield was Sekou, a facilitator who had 16 goals and a team-high 20 assists.

“With (Sekou) being in the midfield we were able to do a lot more in attacking,” Kadeem said. “Sometimes when he’s at center back, I don’t always have that chemistry with other players up there. … Even our teammates say, sometimes we just flick the ball to each other, pass, pass and be in on goal, things like that. We’ve played together our whole life so the chemistry is really there. We know how to play with each other.”

The senior playmakers were quite the luxury for first-year South head coach Christian Vasquez.

“I researched and saw (the Agards) were (Daily Post) Super Six, so I was excited (to coach them),” Vasquez said.

Their presence made the transition for a new coach smoother.

“It sounds foolish to say, but it was easy,” Vasquez said. “You kind of get them fit, get them where you think they’re strongest at and they do the rest. … Kadeem is a striker and one thing he does really well is scoring. As a striker, you live off scoring goals and he does that really well. Sekou’s just a great all-around player. He can play anywhere you want him to play.”

Soccer has been the main sport for the Agards, longtime Snellville residents whose parents are from Guyana, since second grade (after one unsuccessful basketball season). They have played on the same team every season of their soccer careers, which will be the case again at Mercer. Playing together in college was by design.

“It was going to be easier for our family (to play for the same college) and it was like, ‘Why would we separate?’” Sekou said. “We can dorm together and stay together like we’ve always been.”

The twins, who have 15-year-old twin sisters and an older brother, had plenty of college options before locking in on Mercer.

“(Mercer’s) close and we somewhat wanted to stay in-state,” Kadeem said. “They had engineering, which is what we’re both doing, and the soccer program was good. We knew some of the players and we thought it would be a good fit for us.”

Sekou, who graduated with a 3.76 GPA, plans to major in computer engineering, while Kadeem, who had a 3.6 GPA, focuses on an engineering major. They both hope to get on the field quickly at the college level.

“Both of us I’d say we have to get a little bit bigger (for college soccer) because we’re kind of skinny right now,” Kadeem said.

“For me, I’ve got to get my skills up a little more, my touch. … It’s definitely going to be much harder in college. It’s pretty physical. I think we’ll get used to it. It will be good being around better guys. It will make us better, too.”

At the high school level, the Agards were always among the best.

They stood out as freshmen at South, then had breakout sophomore seasons in 2019, when Kadeem had 19 goals and was the Region 8-AAAAAAA Forward of the Year. Sekou, in his only high school season at center back, was the 8-AAAAAAA Defender of the Year that season, as well as Team MVP. Both were all-county selections and South won the region title.

Their stellar play continued in a 2020 season that saw the Comets roll to an 11-0 start, only to have the COVID-19 pandemic call off what was a promising season. They made up for it with the best boys soccer season in school history that included another region title and the Comets’ deepest playoff run to the state semifinals.

The 2021 team fell just short of its state championship goal, but still left a considerable legacy.

“The (South) soccer program didn’t get much attention when we were younger,” Kadeem said. “As the years went by, we got better and had more accomplishments like winning region. And now we’re making history and making the Final Four. I think we left a good mark.”

The Daily Post's selections for the best in Gwinnett soccer from the 2021 high school season.