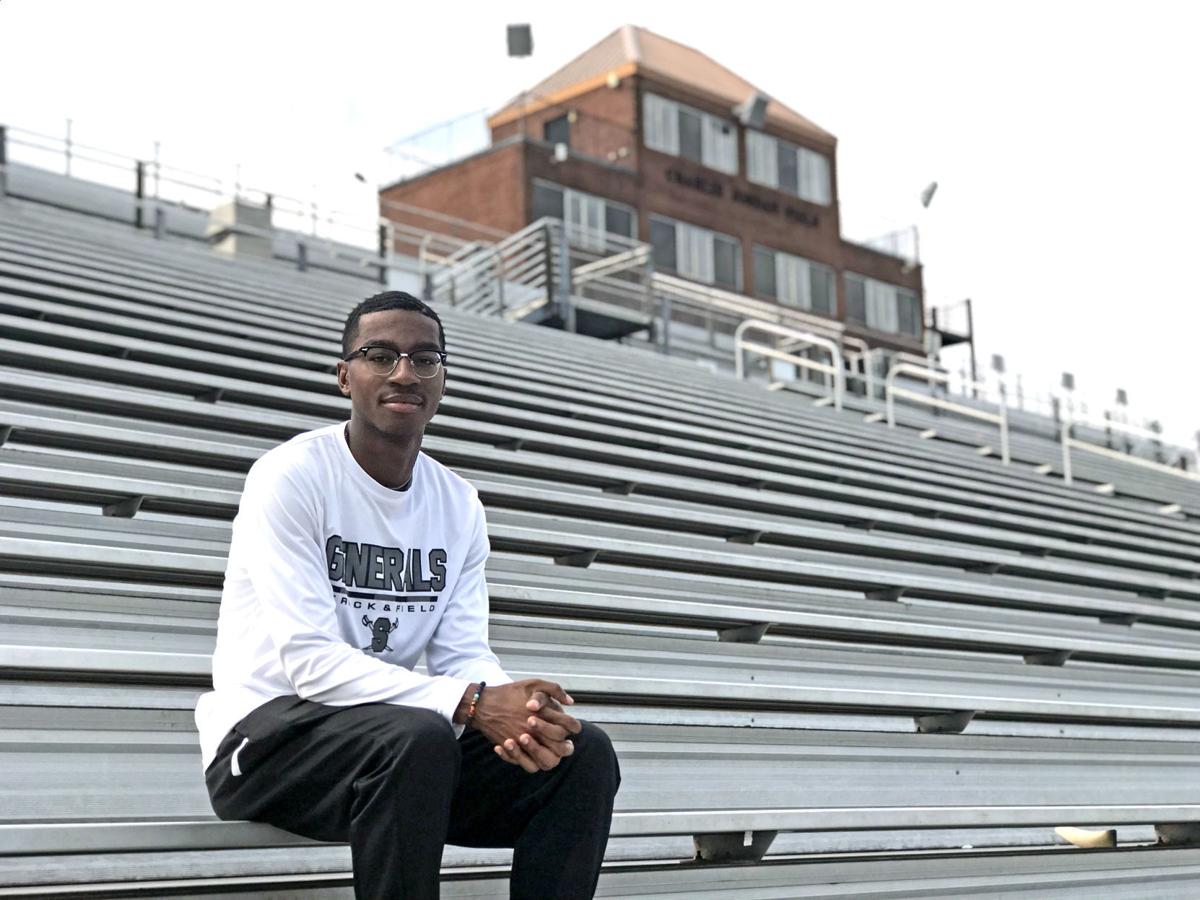 Shiloh’s Elijah Berry is the Gwinnett Daily Post’s Boys Runner of the Year after winning the Class AAAAAAA title in the 800, placing third in the 400 and helping the 800 relay to a state championship. (Staff Photo: Christine Troyke) 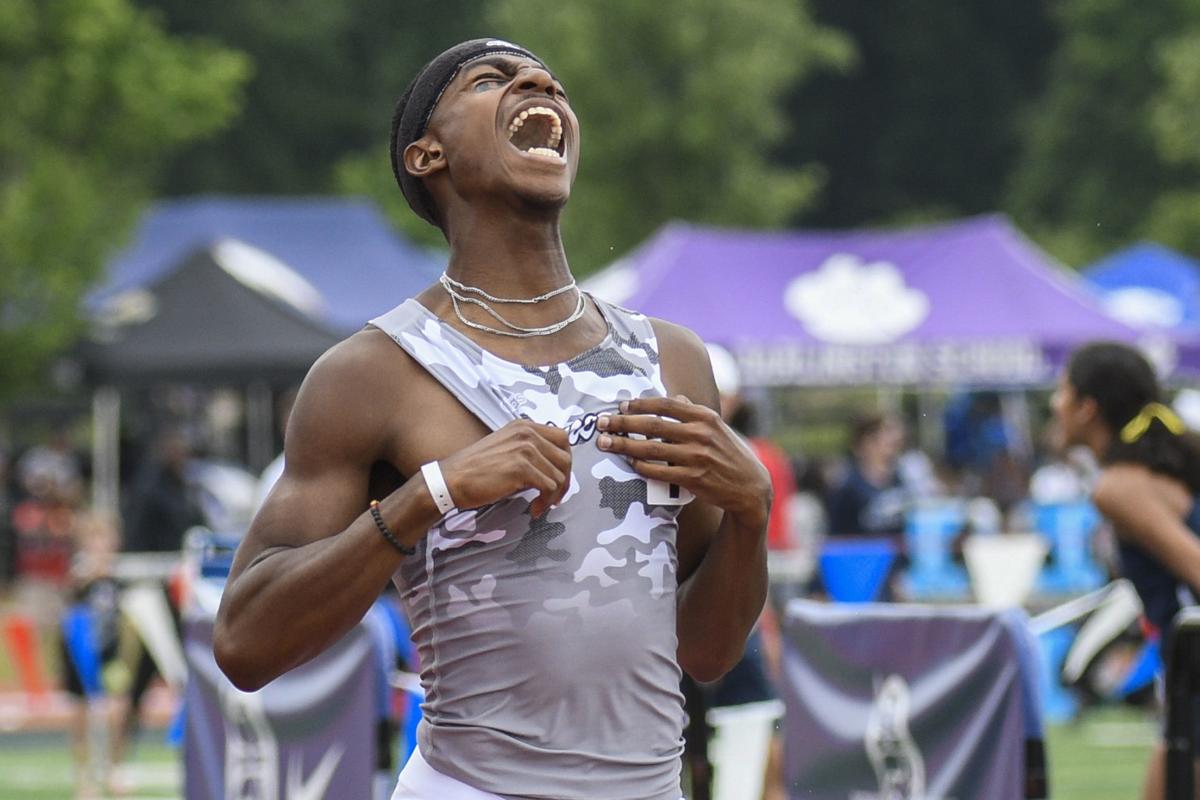 Shiloh's Elijah Berry wins and reacts to winning the boys 7A 800 meter race during the Georgia State Track and Field championships at Berry College. 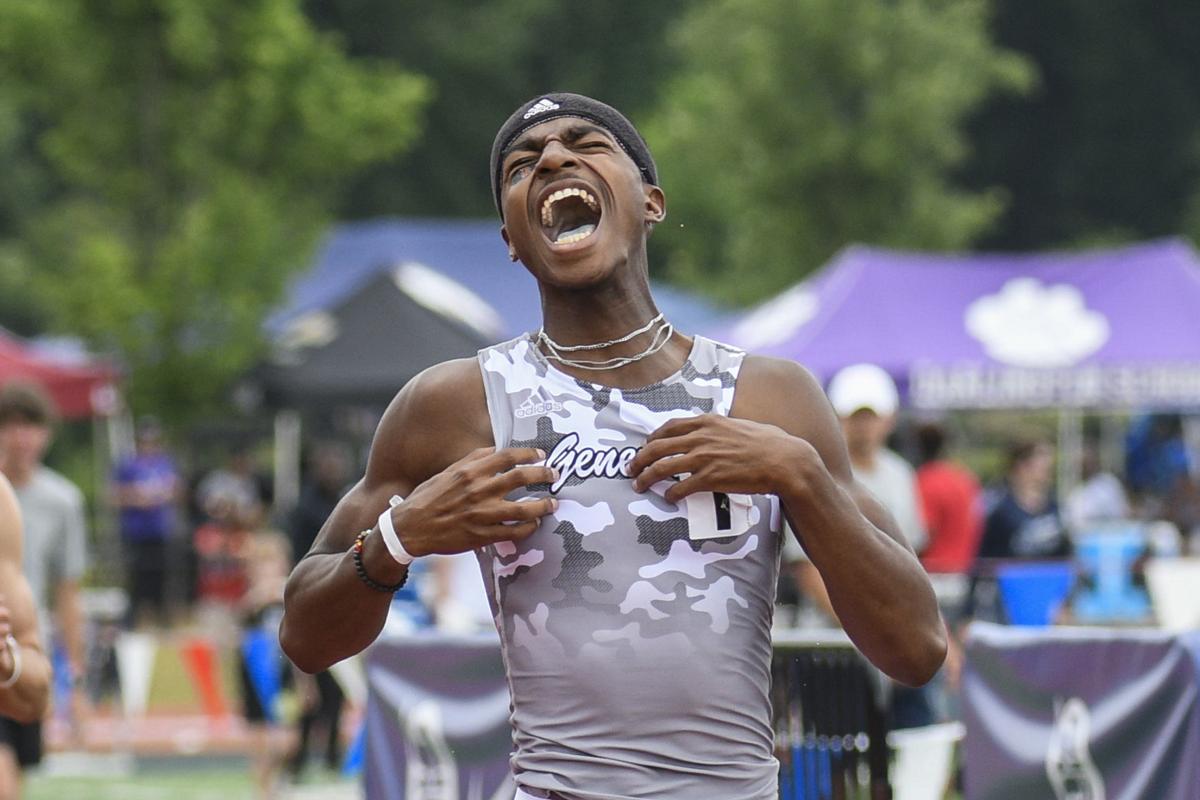 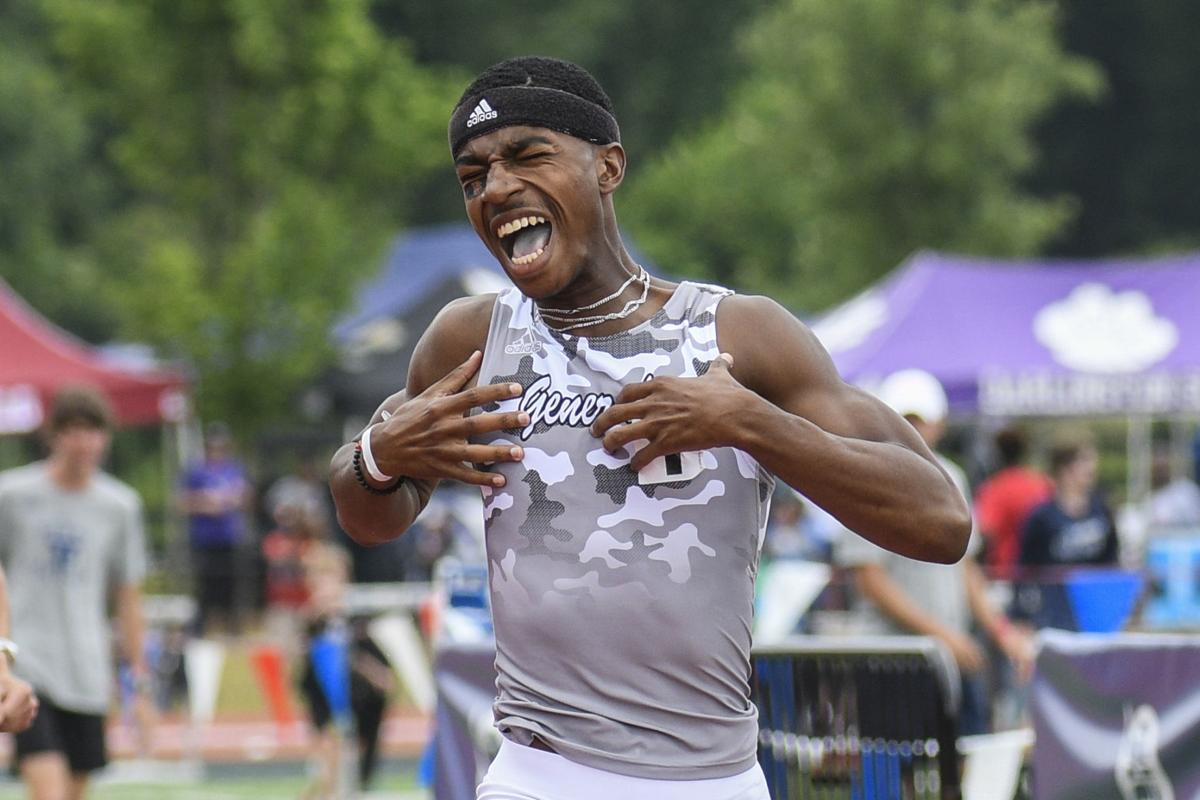 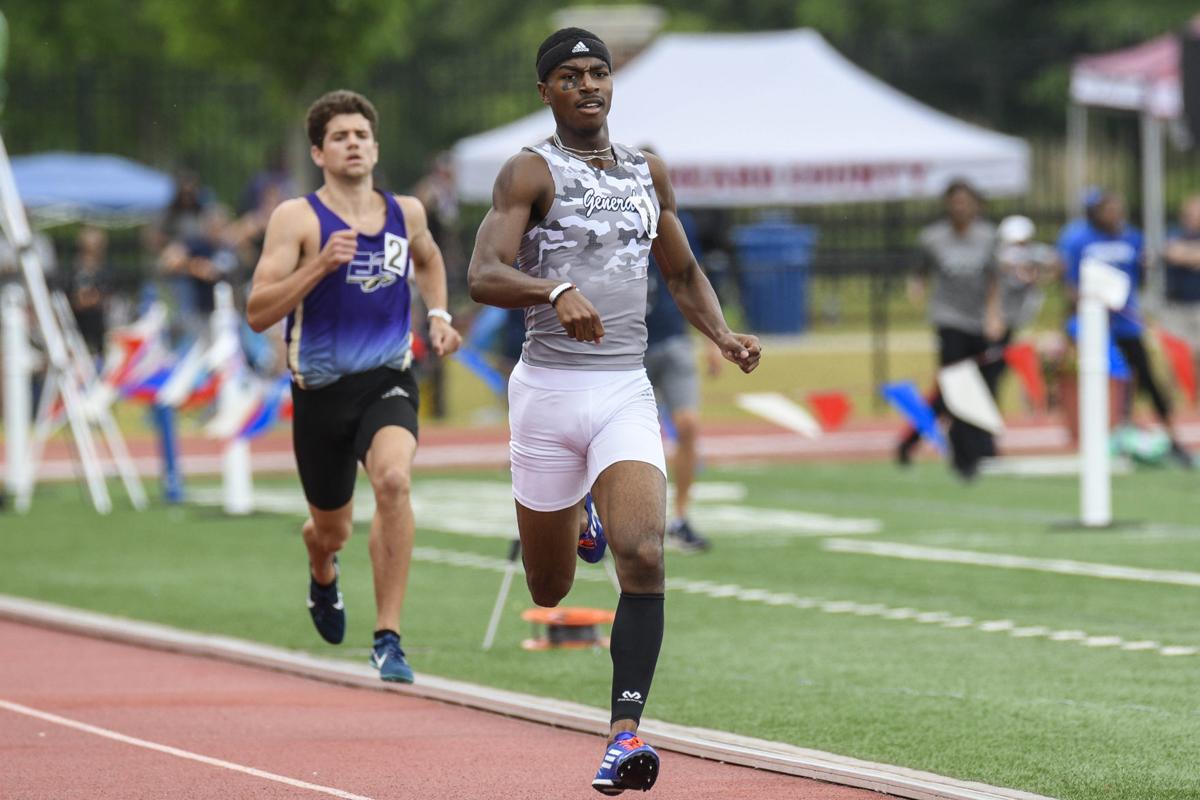 Shiloh’s Elijah Berry is the Gwinnett Daily Post’s Boys Runner of the Year after winning the Class AAAAAAA title in the 800, placing third in the 400 and helping the 800 relay to a state championship. (Staff Photo: Christine Troyke)

Shiloh's Elijah Berry wins and reacts to winning the boys 7A 800 meter race during the Georgia State Track and Field championships at Berry College.

Elijah Berry didn’t listen to his coach and ended up as the state’s best 800 runner.

The Shiloh senior chuckled at the memory.

And, to be clear, he didn’t deliberately disobey instructions at that meet four years ago.

“He wanted me to just get a feel for how an 8 is supposed to be so he just wanted me to run the first lap and step off the track,” Berry said. “But I didn’t hear him. So I ran both laps and apparently I ran it fast enough where he wanted me to stay in the 8.”

Which is a valuable lesson.

“You’ve always got to listen to your coach if you don’t want to run the 8,” Berry said with a laugh.

The two races he runs individually are the least liked by most track athletes. The 400 and 800 are the difficult middle-of-the-road races, neither sprint nor true distance. Berry, the Daily Post’s Boys Runner of the Year, was among the majority.

“At first, I hated both events, I’m not even going to lie,” he said. “The 4, I started off in seventh grade with the middle school team. My middle school coach, he had a love for the 4 and shared that with me. So I actually started loving the 4.”

The accidental 800 came during his freshman year.

“It turned out to be a good decision — that I didn’t listen — from that day on, I’ve always run the 4 and the 8,” Berry said. “I guess it was supposed to happen.”

Berry’s path to the top — he was Class AAAAAAA’s high-point athlete and helped lead the Generals to the overall team title — started two years later than it might have. He played soccer and had a friend suggest he join the track team in fifth grade.

“But I didn’t turn my physical in on time, so I had to turn it in in seventh grade,” Berry said with an endearingly sheepish grin. “Ooo. Uh, that was a year.”

He laughed at the initial results.

“I had some slow times,” Berry said. “Oh, at the time, I thought I was flying, but looking back, no.

“My eighth-grade year, I fell in love with the sport. It was fun. It brought me a lot of new friends and a sense of competitiveness that I loved.”

One of the things that made a difference in the last 18 months was finding a way to leave his smiling nature on the sidelines.

“EJ is a good kid,” Shiloh head coach Devin Jones said. “He’s raised well with a system that supports him. I can’t think of a time when I asked him to do something and he didn’t do it.

“But it took him some time to separate when it was time to be the nice guy and when to be a beast on the track. Once he was able to delineate the two, he stepped into the light.”

The shift came in the middle of his junior year.

“He started to understand it’s OK to compete, to stand out,” Jones said.

Last year, Berry finished third at state in the 800, his highest finish, and helped the 1,600 relay to a gold medal. It propelled him into a good summer season. He asked his coach if he could add the 400 for the rare double as a senior.

“He said he’d think about it,” Berry said. “My indoor season, I opened with 49 (seconds) and two weeks later I ran 48.62. So he talked to me about it. My parents and I talked. We thought it was going to be a good choice.”

Part of the reason the combo is so tough is the schedule at the state meet.

“A lot of athletes aren’t able to do it,” Jones said. “He’s one that was successful.”

“I was pretty anxious before the race so I got out of my race plan,” Berry said.

“I know he wanted that 4-8 double, but in Class AAAAAAA, that’s tough,” Jones said. “Iron sharpens iron and to even finish in the top three is outstanding.”

Berry’s win in the 800 in 1:56.41 pushed the Generals into the overall lead on the final day of the state meet.

“To be honest, I was just focused on winning the 800 because I wanted to make sure my team had the points,” Berry said.

With the team title locked up, Shiloh closed the meet with one of its best performances in the 1,600-meter relay. Berry, Paryce Taylor, Jaden Barker and Simpson raced past the field to win the state championship in 3:13.28, tantalizingly close to the state record of 3:13.21, set in 1989 by Southwest DeKalb.

Berry finished with 28 points, more than any other athlete at the boys Class AAAAAAA championships.

“It’s no surprise because I’ve seen him work for it,” said Jones, who was promoted from assistant to head coach after Shiloh won in 2014.”He’s been building that confidence from the three years prior and he went on a tear.

“It’s not something you just jump up and do. You have to be a special talent and you have to be so dedicated in your training. We talked (before the season) about the 4 and the 8, but more so about what legacy did he want to leave. We knew we had a shot at the title. We had to rebuild in 2014 and he rode that wave.”