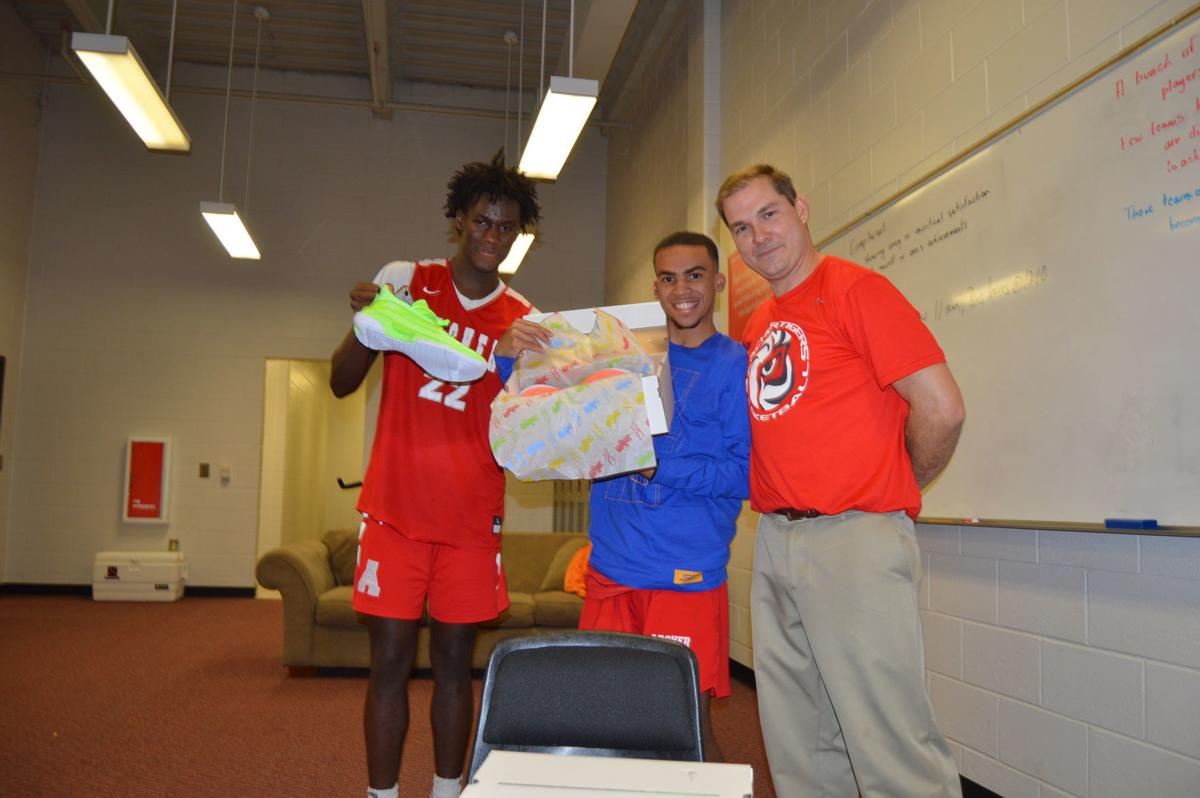 Archer senior Christian Csere, middle, poses with varsity basketball teammate Rochard Simeon, left, and head coach Joel Lecoeuvre to show off shoes and merchandise sent by his favorite NBA player, two-time MVP Stephen Curry. Csere, who has autism, earned a spot on the Tigers’ varsity team this season after serving as a manager the past three years. 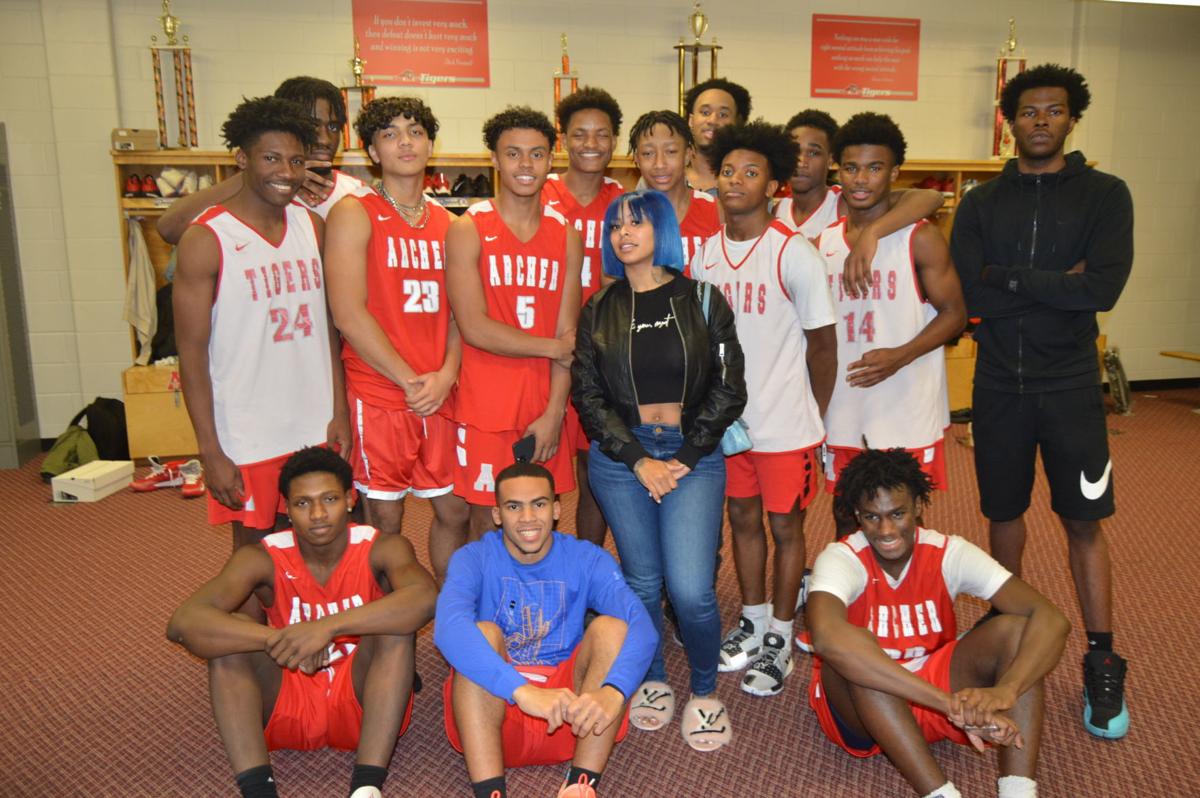 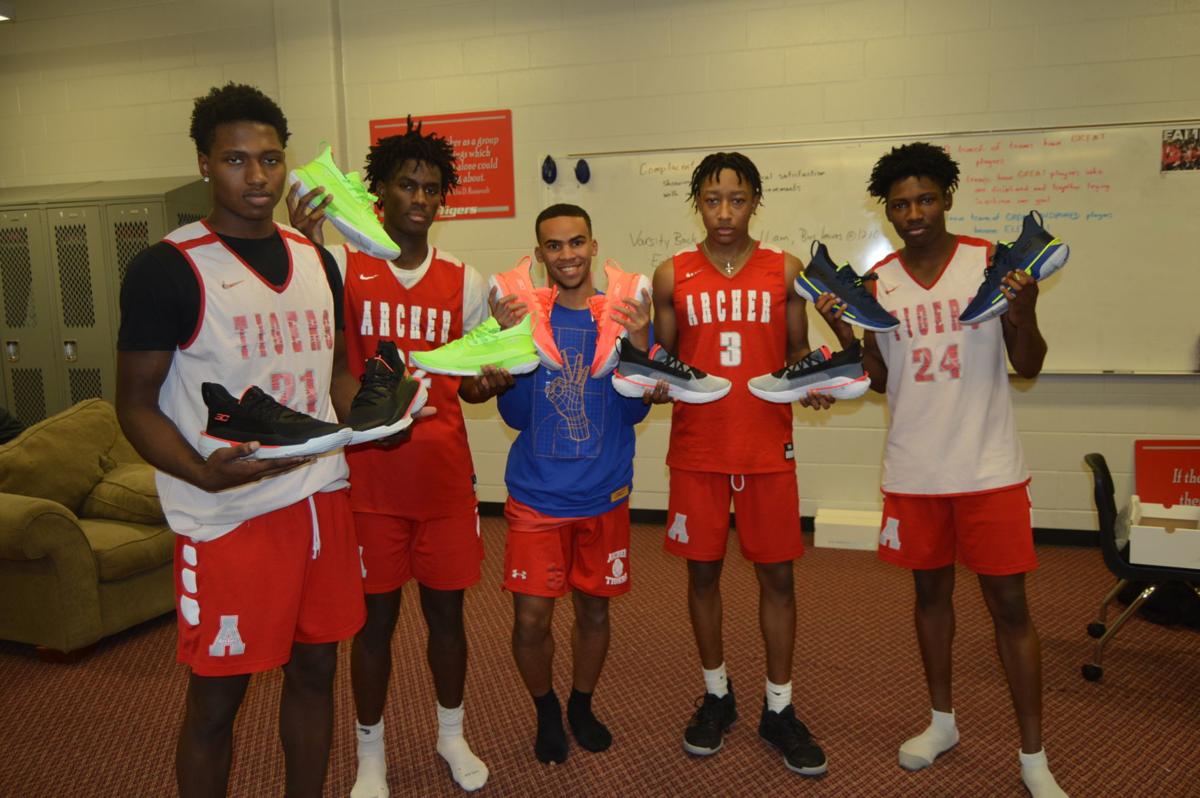 Archer senior Christian Csere, middle, poses with Tigers basketball teammates (L to R) Justin Edmondson, Areyon Johnson, C.J. Hines and Kreell Thompson and show off merchandise sent to him by NBA star Stephen Curry and shared with his teammates. Csere, who has autism, earned a spot on the Archer varsity team this fall after serving as a team manager the past three seasons.

Archer senior Christian Csere, middle, poses with varsity basketball teammate Rochard Simeon, left, and head coach Joel Lecoeuvre to show off shoes and merchandise sent by his favorite NBA player, two-time MVP Stephen Curry. Csere, who has autism, earned a spot on the Tigers’ varsity team this season after serving as a manager the past three years.

Archer senior Christian Csere, middle, poses with Tigers basketball teammates (L to R) Justin Edmondson, Areyon Johnson, C.J. Hines and Kreell Thompson and show off merchandise sent to him by NBA star Stephen Curry and shared with his teammates. Csere, who has autism, earned a spot on the Archer varsity team this fall after serving as a team manager the past three seasons.

LAWRENCEVILLE — What started as a simple thank you Instagram post and Twitter tweet has turned into something much bigger, and it has become a very special month or so for Archer’s basketball program, especially Christian Csere.

Of course, that shouldn’t be surprising taking two things into consideration.

One is the fact that the journey Csere, who has autism, has taken throughout his life, culminating with the realization of a dream he’s had since he started at Archer of playing varsity basketball when he was told he had made the team for his senior season after serving as its manager the previous three years.

Of course, it also helped that the instagram post and tweet, which was of a video of Tigers head coach Joel Lecoeuvre presenting Csere with his varsity jersey in front of his new teammates, was initially sent out by “Love and Hip Hop” cast member Alexis Skyy McFarland, who just so happens to be Csere’s sister.

Her notoriety gave the culmination of Csere’s dream instant visibility, and it even caught the attention of his favorite NBA player, two-time league Most Valuable Player Stephen Curry, whose No. 30 Csere proudly wears — the first player to wear that number in Archer boys hoops history.

What has happened since has made this an even more special month than Csere, his family and teammates could’ve imagined.

“I have, like, 3.3 million (Instagram) followers, and I’m in the (entertainment) industry,” McFarland said. “So once that happens, it usually goes to ‘The Shade Room,’ which is 50 millions followers. So obviously, (Curry) had seen (the video of Christian getting his varsity jersey).

“I didn’t know about it, but the video started going viral. It wasn’t (necessarily) meant to go viral. I just posted it to say thank you (to Lecoeuvre and the Archer program), and it ended up turning into something different. … I sent it just to kind of share with my Mom, and I just posted to say, ‘Thank you, God,’ because we know Christian wanted to be on the team so bad. … I just feel like it’s an amazing thing. … And then Stephen Curry (must have) seen it, and he posted it.”

As it turns out, Curry has done a lot more than just see the video.

“(Curry’s) manager emailed me the next day (after the video first appeared on social media),” Lecoeuvre said. “And he was like, … ‘Stephen was really moved by the video, and he wanted to send Christian some stuff.’ And he wanted Christian’s sizes top to bottom and shoe size. So all this stuff started coming in.”

Indeed, Curry has sent him several new pairs of shoes and other apparel, much of which was delivered to Archer on Friday, to Csere as a token of his admiration.

But as thrilled and appreciative as Csere was the gesture, he also wanted to do something for his teammates.

“Christian was saying, ‘I wanted to share it with the team,’” Lecoeuvre said. “And I said, ‘We’ll, we can’t give them all shoes because (not everyone) wears size 12. So we started working with the bags and other stuff. We’re trying to give everybody something.”

To everyone who knows Csere, that gesture very much fits in with his character.

He has definitely been a caring and hard worker as the Tigers’ manager over the past three seasons, and that conscientiousness definitely got Lecoeuvre’s attention when he made the decision to add Csere to the team.

But the coach is quite clear that Csere isn’t on the team only to create a feel-good story.

“That’s the biggest thing,” Lecoeuvre said. “I don’t want people to think it’s a pity party because he’s got a learning disability. He’s earned it. He’s earned a spot on the team. He’s been here every day, and he’s earned his spot. He knows what we do every day (in practice). He goes through all the drills. It’s not like I did him a solid. He earned it.

It’s a moment Lecoeuvre will never forget, and neither will Csere.

“It think it was during third period (one day in school),” Csere recalled. “Me and Coach Lecouerve were talking in the hallway, and he told me, ‘You made the team, and you can do the drills in practice.’”

Csere has already seen playing time on the floor this season, and scored his first varsity points on a layup late in the Tigers’ season-opening win over Mountain View on Nov. 12.

It’s actually not the first basket of his basketball career. In addition to playing recreation league ball as a kid, he has also played with the Archer junior varsity program previously, and hit a 3-pointer for the Tigers last season.

Few people, least of all his mother, are surprised at how well Csere has handled everything that has come his way — from his special needs and everything that surrounds them, to all the excitement and attention of the past month.

“He’s (also) very much rooted in church, so I think that helps — his relationship with 12 Stone as part of the high school ministry.”

As memorable his three years in the Archer program as a manager and player has been for Csere, the future is also on his mind and the minds of his family, which includes his mother and sister, brothers Travis and Chance, stepfather Jamar and numerous extended family members.

The immediate future involves his senior season, and further down the road, perhaps getting to meet Curry if such a meeting can be arranged.

Even further into the future, Csere is hoping to attend college to work towards a post-secondary degree. He’s even applied to Clemson University, one such school that offers such a program for special needs students like him.

Whatever the long-term future holds for him, he won’t face it along. The Archer basketball community will be with him, something his family is very grateful for.

“Well, (it means a lot) to all of us,” Nikki Csere said of the support from the school’s community. “I was a single mom for a long time. I would actually cry (early in Chrsitian’s life). I didn’t understand why he (had to deal with autism). I would worry about (his future). I mean, money can’t buy his future, and I would worry, like, ‘Where is he going to go? What is he going to do after high school?’

“I’m just so overwhelmed with joy and happiness that he has this opportunity, and (that) people love on him, and that he has motivation. He motivates me.”