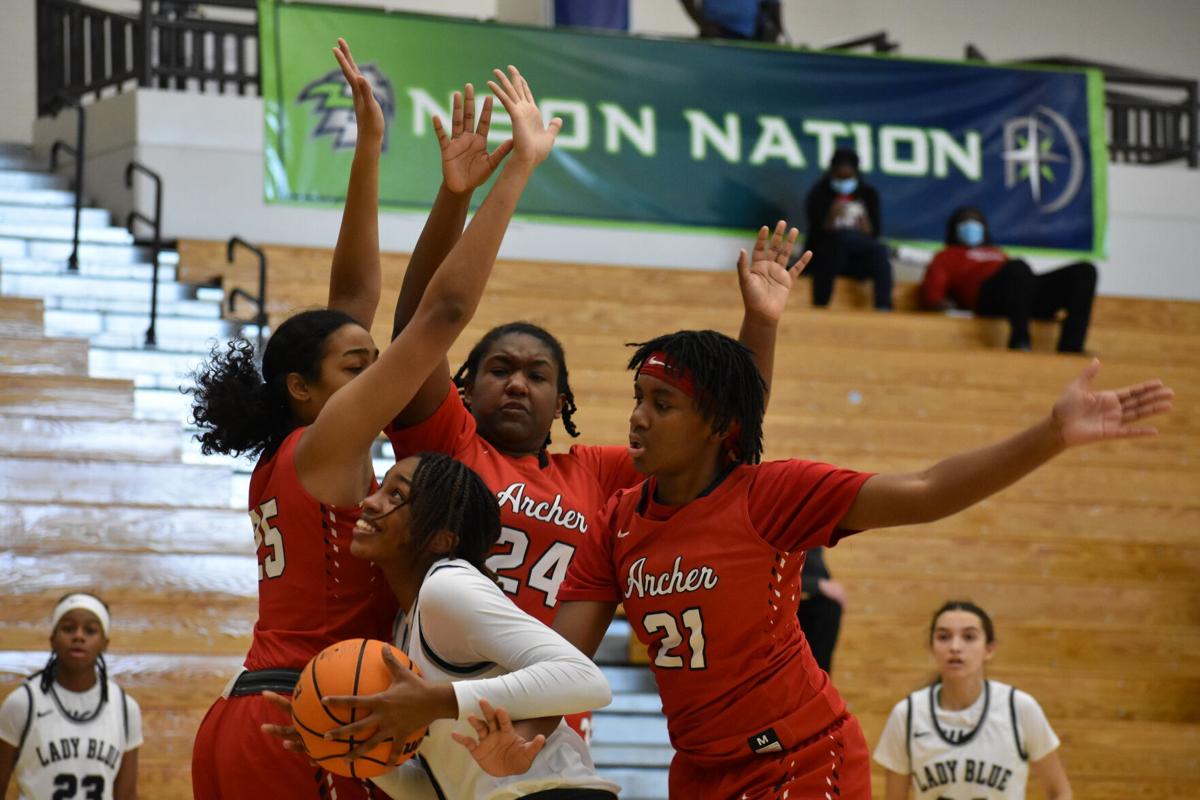 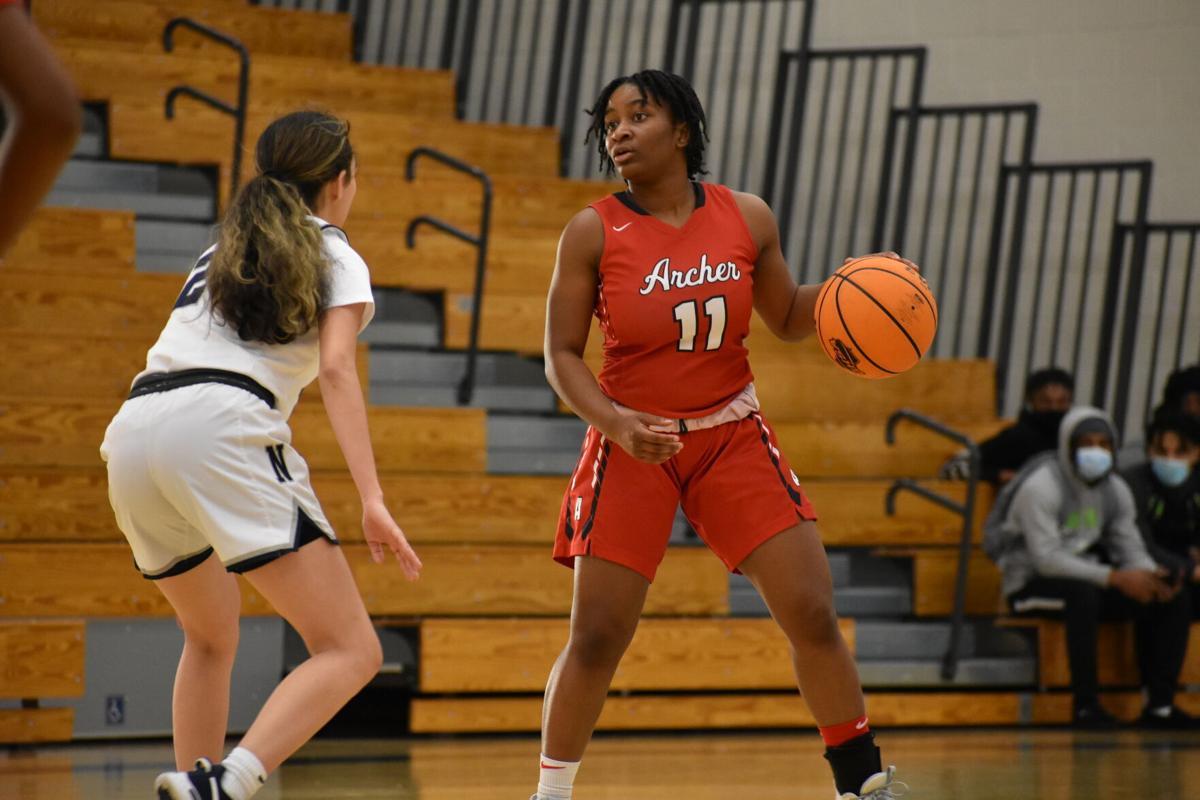 Archer senior Cazia Nelson (11) dribbles against Norcross in the Region 7-AAAAAAA Tournament finals at Discovery. Nelson had a game-high 26 points.

LAWRENCEVILLE — Taniya McGowan was quick to point out Friday’s Region 7-AAAAAAA Tournament final against Norcross wasn’t her best basketball game. The Archer sophomore cited her scoring line of only four points as the primary reason.

But her final two points were unforgettable.

McGowan took a lobbed inbounds pass and made a tap-in in the lane as time expired at Discovery for the final margin in a wild, 38-37 victory that gave the Tigers their first region title since 2017. They will take a No. 1 seed into the state tournament, while Norcross, the regular-season region champion, will be a No. 2 seed.

“The whole game I had four points, but I scored when it mattered,” McGowan said.

Archer (19-8) led 25-8 at halftime, but couldn’t finish off the Blue Devils (19-7), who stormed back over the final two quarters. Norcross looked like it had completed an amazing comeback with nine seconds left when DeNaeja Morton’s jumper with nine seconds left provided a 37-36 lead. Morton played a big role in the rally with 10 second-half points, seven in the fourth quarter alone.

Cazia Nelson, who outscored Norcross by herself until early in the fourth quarter, drove the length of the court and had a good look at a layup that rimmed out. The rebound fell out of bounds with 0.3 seconds left.

Archer called timeout to set up a play, and Norcross followed with a timeout of its own after seeing how the Tigers lined up.

“I was hoping (McGowan would be open),” Archer girls coach Dani Wright said. “The first time we came out we weren’t set right. So I was glad they called timeout. The timeout came and I said, ‘Girls, you’ve got to focus in on the timeouts.’ Because we were too spread out. The whole goal was just to set it up for a quick tip-in with it being 0.3 seconds. They executed and they finished. I’m just so proud of them.”

The play went to McGowan because of her leaping ability. She got free wide open behind a wall of teammates and finished off the basket.

“She’s been practicing this quite a bit, but we’ve never done that play,” Wright said. “So it was a fun time to use it at the end.”

Archer never would have been in championship position without Nelson. The senior guard finished with a game-high 26 points (the Tigers’ second-leading scorer, Courtney Nesbitt, had six points) and nearly buried Norcross with 17 in the first half. Twelve of those points came in the second quarter when she was the only consistent offense for either team.

The halftime lead was 25-8, trimmed to that by two free throws from Norcross’ Zaria Hurston (15 points, eight rebounds) just before half. Archer controlled the interior well in the first half, a big reason why it held a 42-24 edge in rebounding — Maya Jackson led the way with 12 rebounds and McGowan grabbed seven.

“The girls ran the floor so well and pushed the ball,” Wright said of the first half. “I thought doing that was big. Our defensive effort was great. They really packed it inside, knew who the shooters were. Norcross doesn’t back down, that’s not who they are. They’re not going to roll over and play dead. They came back aggressive in that second half and it was a fun game to watch.”

Wright was right about Norcross, a team she coached before taking the Archer job prior to the 2019-20 season.

The Blue Devils opened the fourth quarter with a 15-3 run, taking their first lead of the game with 3:20 left in the fourth quarter on a basket by Mariah Baltierra (five points, three steals). Nelson scored to put Archer back in front with 2:23 left, and that score held until Morton’s go-ahead basket with nine seconds left.

The tight matchup was expected after Norcross won two close games between the two earlier in the season — 44-40 on Dec. 3 and 46-43 on Jan. 12. The Tigers were able to avoid the season sweep with the win.

Archer, because of a combination of injury, COVID-19 and other sicknesses, also played at full strength for the first time all season. It was their third game with all their players available, but their first with all their players and coaches — Wright had to miss games recently because her son got the coronavirus. Longtime Gwinnett coach Angie Hembree came out of retirement and filled in for Wright during that span.

All of the Tigers celebrated together wildly after McGowan’s shot fell through the net.

“We’ve come so far, even coming in from last year, these girls have learned so much,” Wright said. “They’re developing. These seniors, we’ve got five seniors, and I know they’ve been wanting it. I’m just ecstatic for these seniors that they’ve won the region championship and they’re going to go to state.”