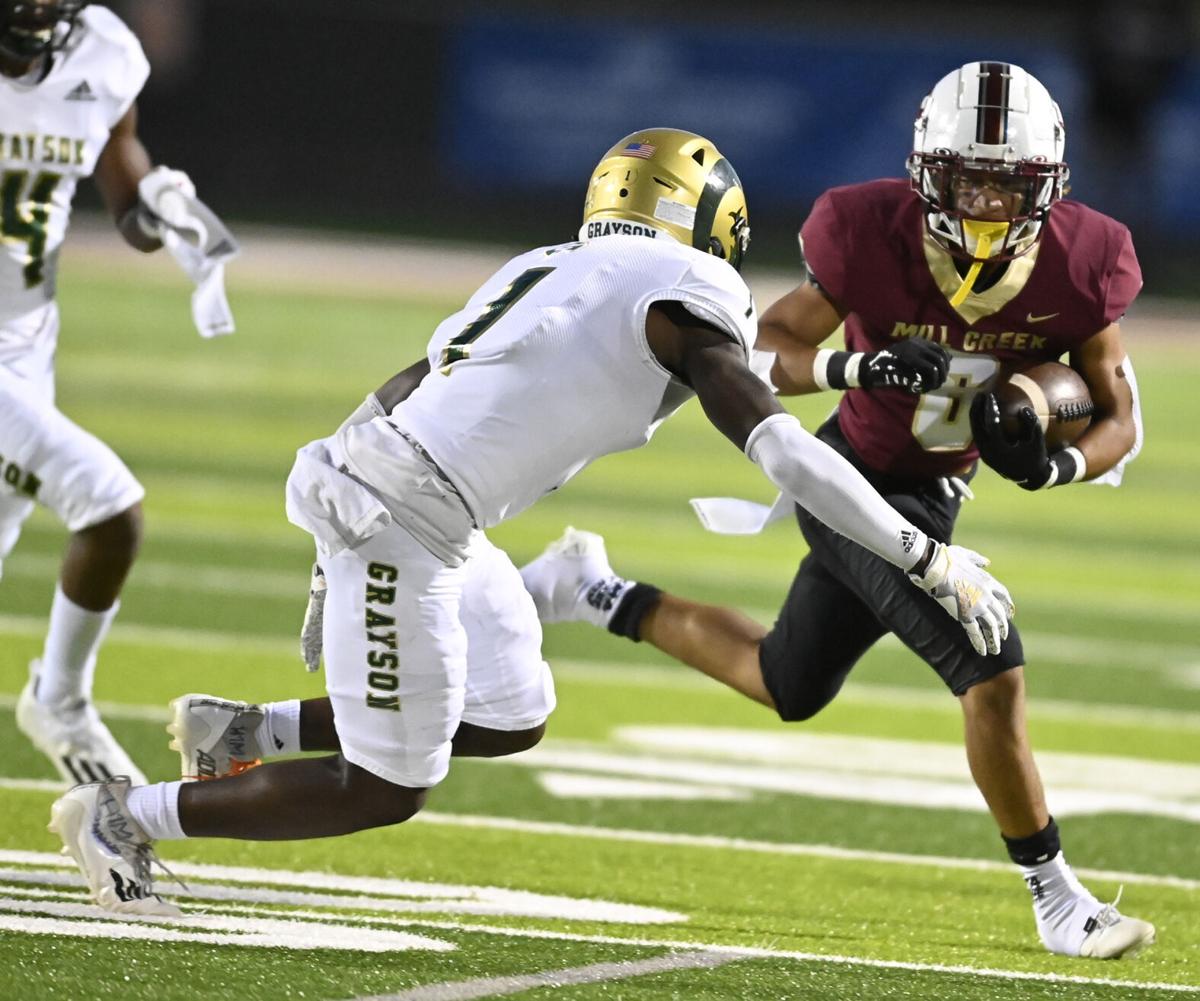 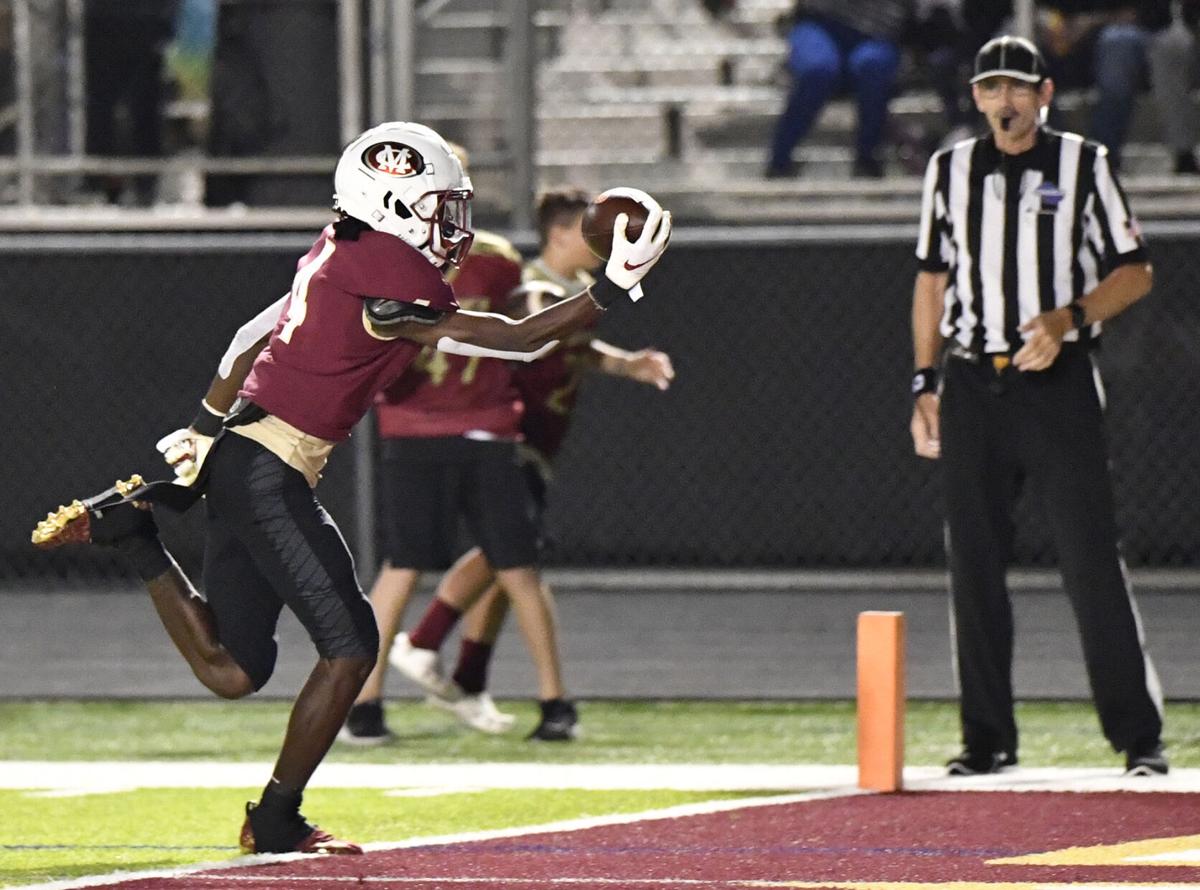 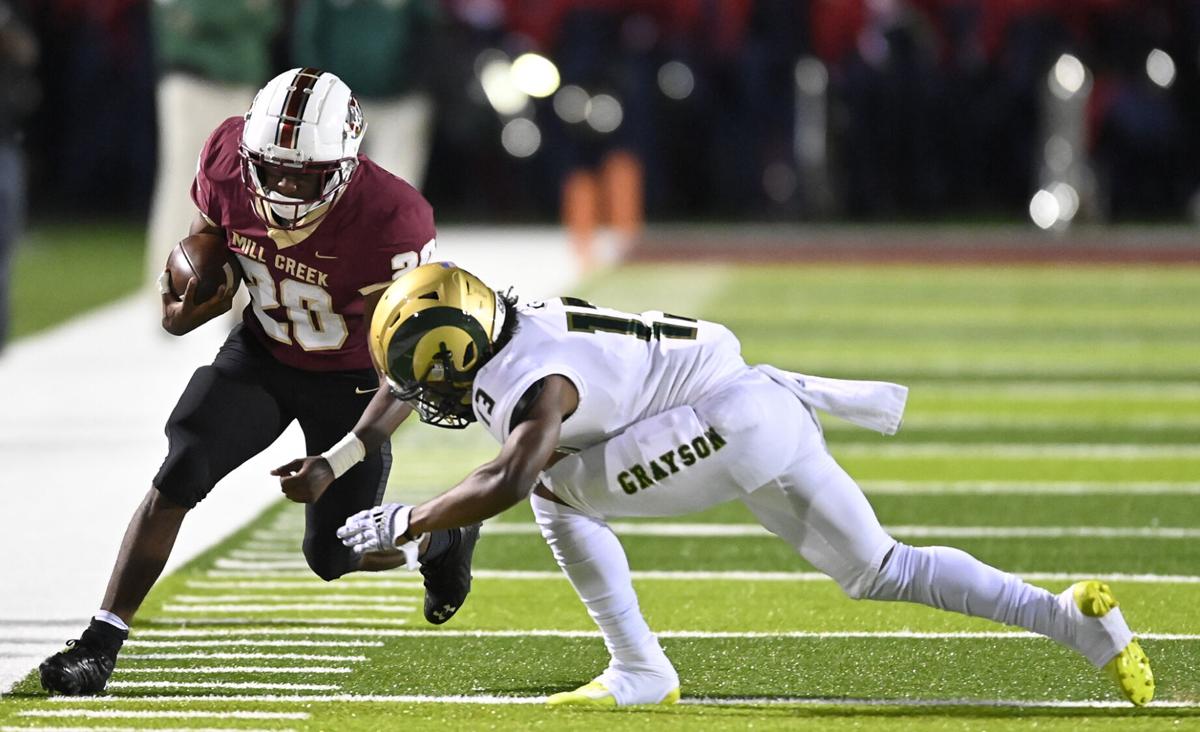 HOSCHTON — A dominant first half was followed by a shaky second Friday night, but in the end the Mill Creek football team got what it wanted.

Mill Creek overcame four second-half turnovers that let the Rams back into the game and pulled out a 28-14 victory, the program’s first over Grayson. The Hawks (5-0) led 21-0 at halftime before a flurry of turnovers, rare for a team that entered with a plus-nine advantage in turnover margin.

After falling in double overtime last year at Grayson — the Rams’ closest game in their state title run — Mill Creek finished the mission this time.

“It does (mean something to beat Grayson),” Mill Creek head coach Josh Lovelady said. “We went toe to toe with them last year against a team that ended up winning it all. We thought we had an opportunity last year and didn’t pull it off. This year we kind of had some things circled as far as opportunities, things from last year. We’ve played Grayson in the playoffs and this is the first time we’ve beat them. It was overdue for our program to get a marquee win against a program like that.”

After the avalanche of turnovers, including a pair of interceptions by Grayson’s Mumu Bin-Wahad, Mill Creek finally sealed the victory with 1:51 left in the fourth quarter when Zekai Wimby raced around left end for a 36-yard touchdown run and the 28-14 edge. A diving interception by Caleb Downs five plays later allowed the Hawks to run out the clock.

The Mill Creek defense posted another impressive outing, giving up just one TD — Grayson’s other score was a 39-yard pick-six by Bin-Wahad. The visiting Rams went with a more pass-heavy attack without the injured JoJo Stone and rushed 14 times for 35 yards. Through five games, Mill Creek still hasn’t allowed 100 total rushing yards on the season. Rams quarterback Rayne Fry was 14 of 32 passing for 90 yards.

“Every week, week in and week out, Coach Z (Jeff Zmistowski) and Coach (Jed) Hodges and the staff do a great job preparing our kids,” Lovelady said of the defense. “And our kids trust us. They don’t go freelance. They stay on their man, stay in their lane. They trust their process and they play fast because they’re prepared.”

Their play steadied things when the four turnovers — three interceptions and a muffed punt — put the Hawks in bad spots.

“We’ve got to learn from those,” Lovelady said. “(Grayson) caused some of them by playing hard. They’re reigning state champions and that’s why you play those games, to learn from your mistakes. Obviously, you don’t want to make mistakes. But when you turn the ball over four times in a half, bad things are going to happen. It could have been worse. That’s where our defense had to step up.

“We flipped the field even though we had to punt a couple of times. We just had to weather the storm against a good team like that and stop the bleeding. I’m impressed with the kids. Do we have things to fix? Yes, we have a lot to fix.”

It was hard to find many faults with the first half, though.

Grayson started the game with four straight three-and-outs and didn’t have a first down until 4 1/2 minutes were left in the half. It finished the first half with 36 yards, two first downs and a 21-0 deficit. It could have been a deeper hole, but the Hawks missed three field goals.

Meanwhile, Mill Creek quarterback Hayden Clark went 15 of 18 for 128 yards and two touchdowns, both to Makhail Wood. Wood, who had three catches for 64 yards in the season’s first four games, had four catches for 69 yards against Grayson.

“It was practice during the week,” Wood said of the key to Mill Creek’s big first half. “My coach told me on Monday to beat a state champion, you’ve got to practice like one and we’ve got to play like one. So that’s what we wanted to come out and do.”

Donovan Journey’s 14-yard TD run late in the first quarter put the Hawks up 7-0, then Clark and Wood connected on a 14-yard scoring strike in the corner of the end zone early in the second quarter. The two hooked up again on a 25-yard score with 11 seconds left in the first half with Wood breaking a tackle before racing the final 15 yards into the end zone.

Bin-Wahad gave Grayson life with his 39-yard interception for a score with 7:16 left in the third quarter. He had another interception on Mill Creek’s next series, but the Hawks’ defense forced a punt. That punt turned to disaster, though, when Downs slipped before making a catch and the ball caromed off him before it was recovered by the Rams’ Michael Daugherty.

Grayson turned its great field position into its only offensive TD four plays later when Fry found Mason Humphrey for a score that cut the margin to 21-14.

Mill Creek’s fourth turnover, an interception and a long return by the Rams’ A.J. Lopez, gave Grayson possession at the Mill Creek 35-yard line with 8:18 remaining. With its lead in jeopardy, the Hawks’ defense forced a turnover on downs in only four plays.

Mill Creek turned that into an 11-play, 69-yard scoring drive that drained more than five minutes off the clock. A high snap put the Hawks into a second-and-23 near midfield, but they overcame with an 11-yard run by Clark (who also rushed four times for 41 yards) and Wimby’s 36-yard clinching TD.

“It means a lot (to beat Grayson) since they won the state championship last year,” Wood said. “This is a big statement that Mill Creek is up next.”

Without Hunter, Collins Hill still shows off on ESPN broadcast with 35-7 win over North Gwinnett