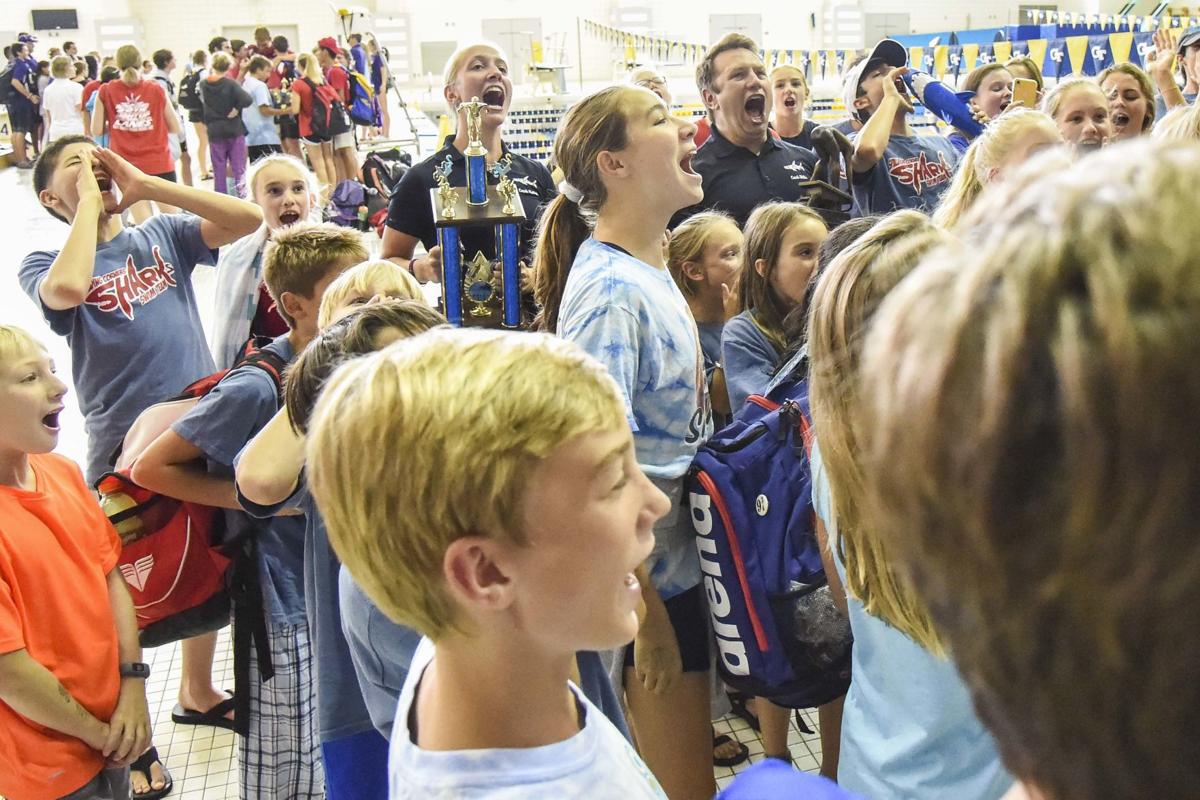 Spalding Corners swimmers and coaches react after accepting the trophy for winning the championship of the Gwinnett County Swim League Championships Sunday at Georgia Tech. 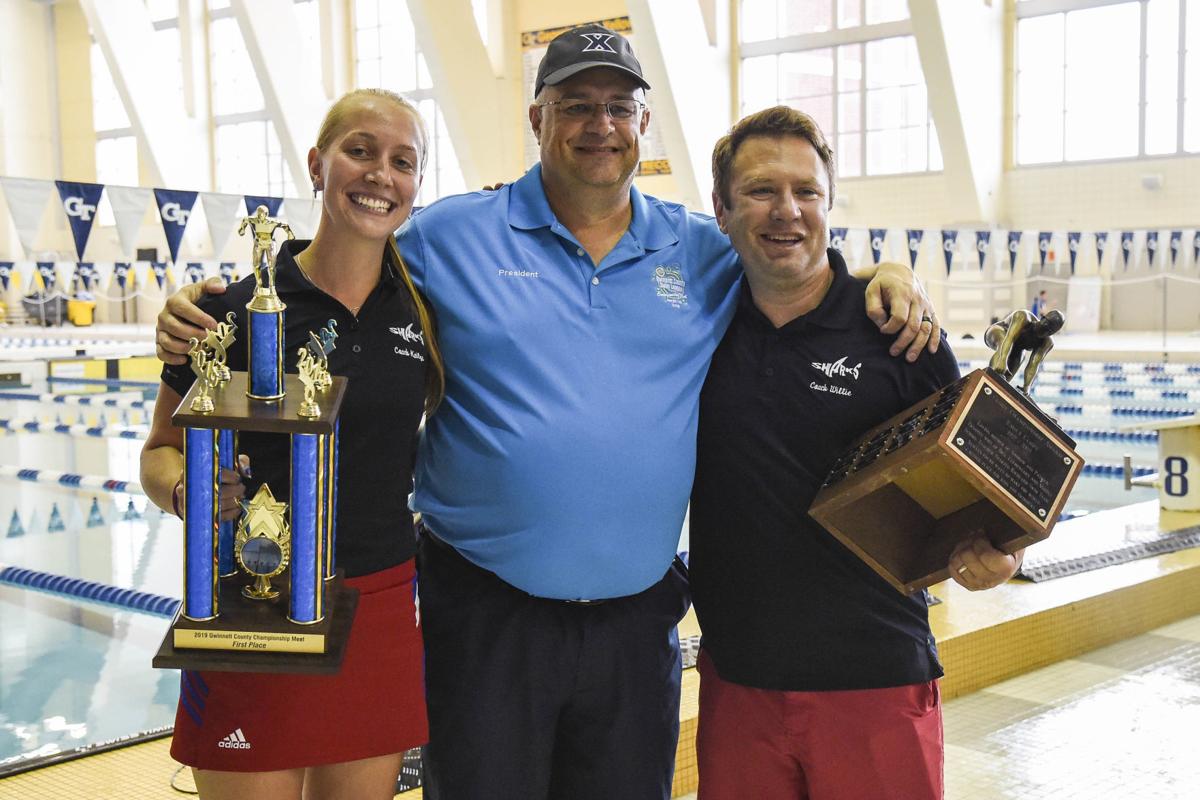 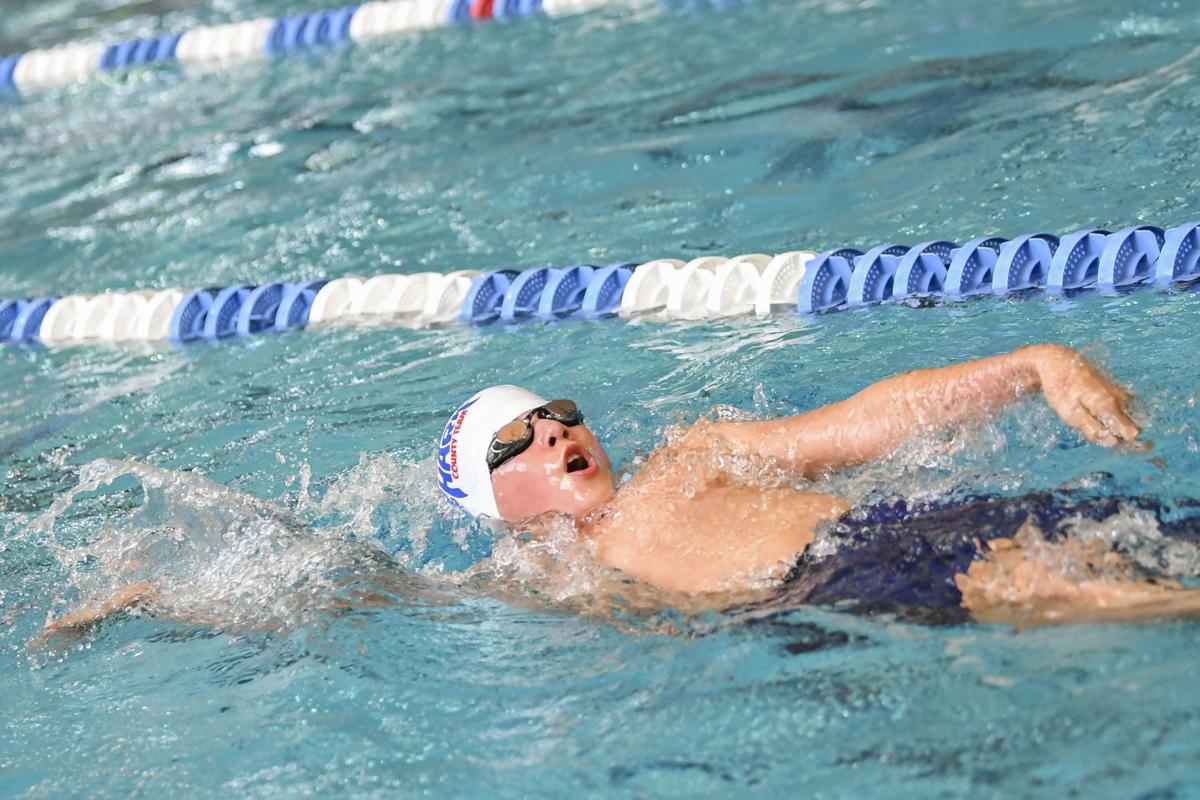 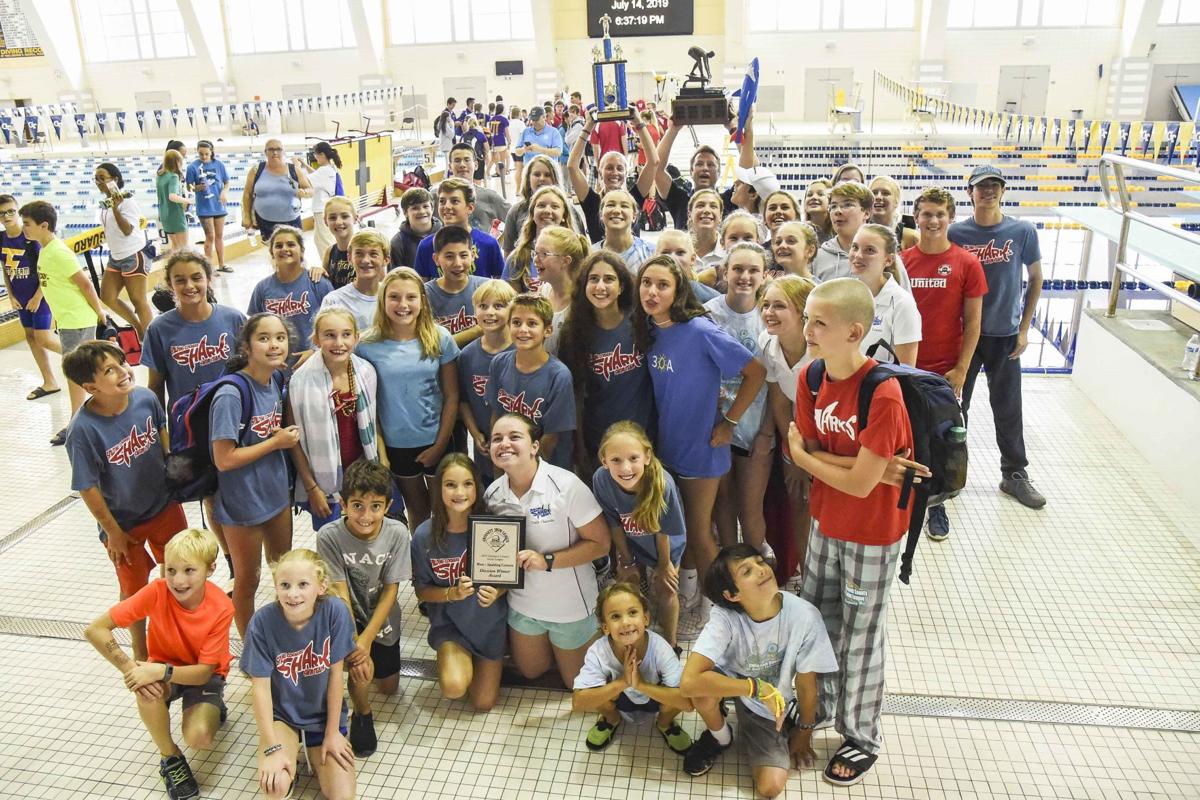 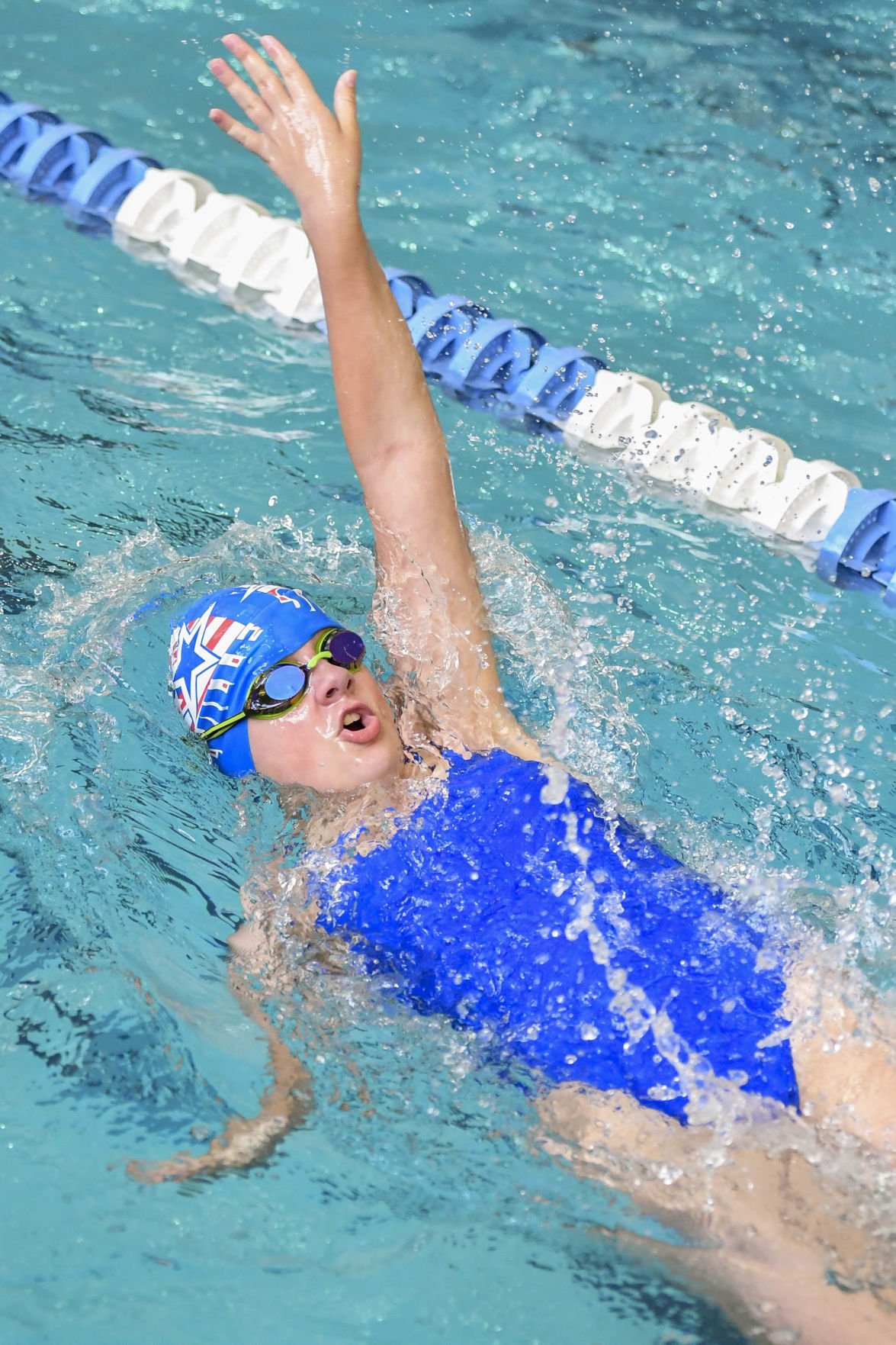 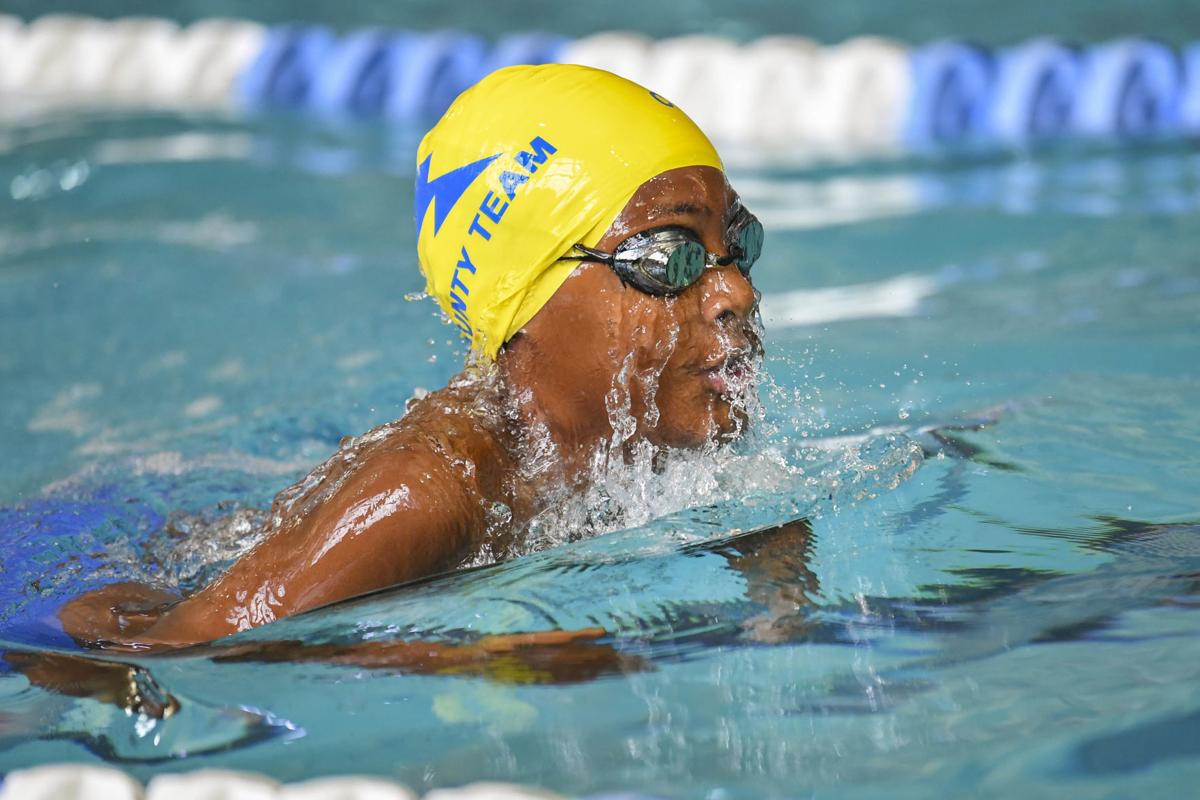 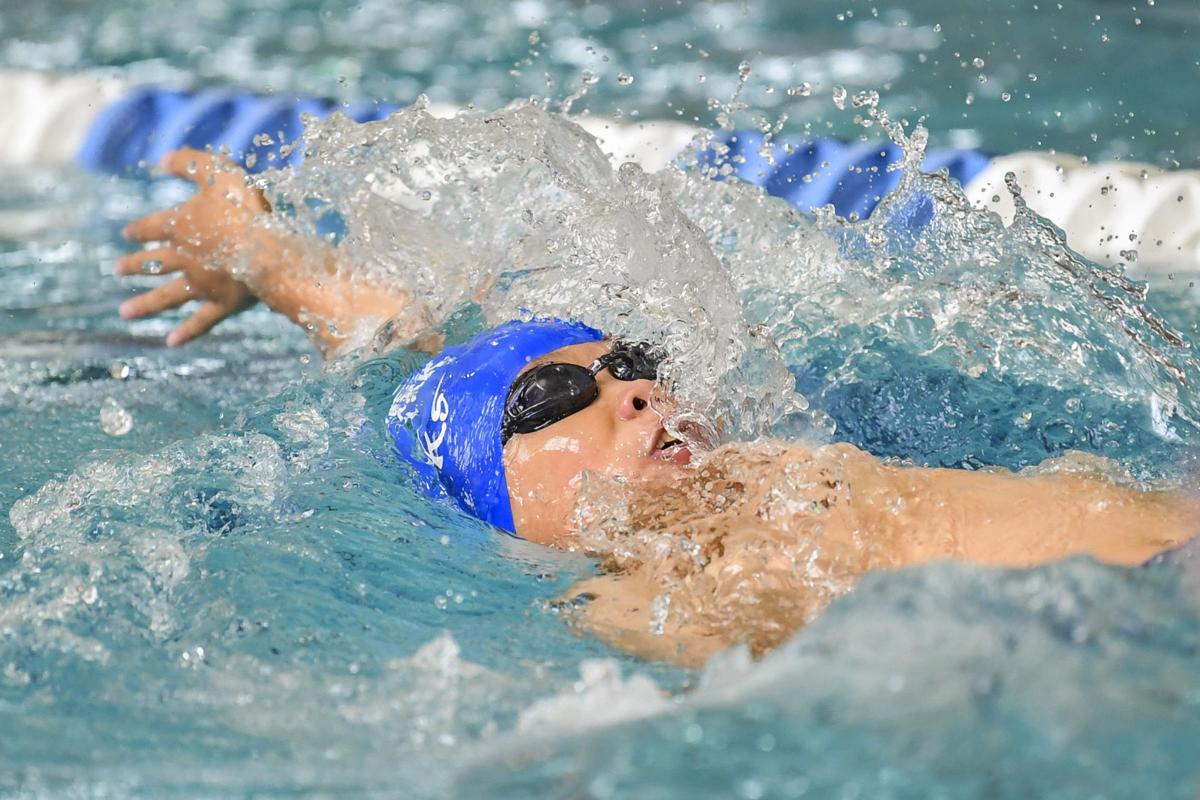 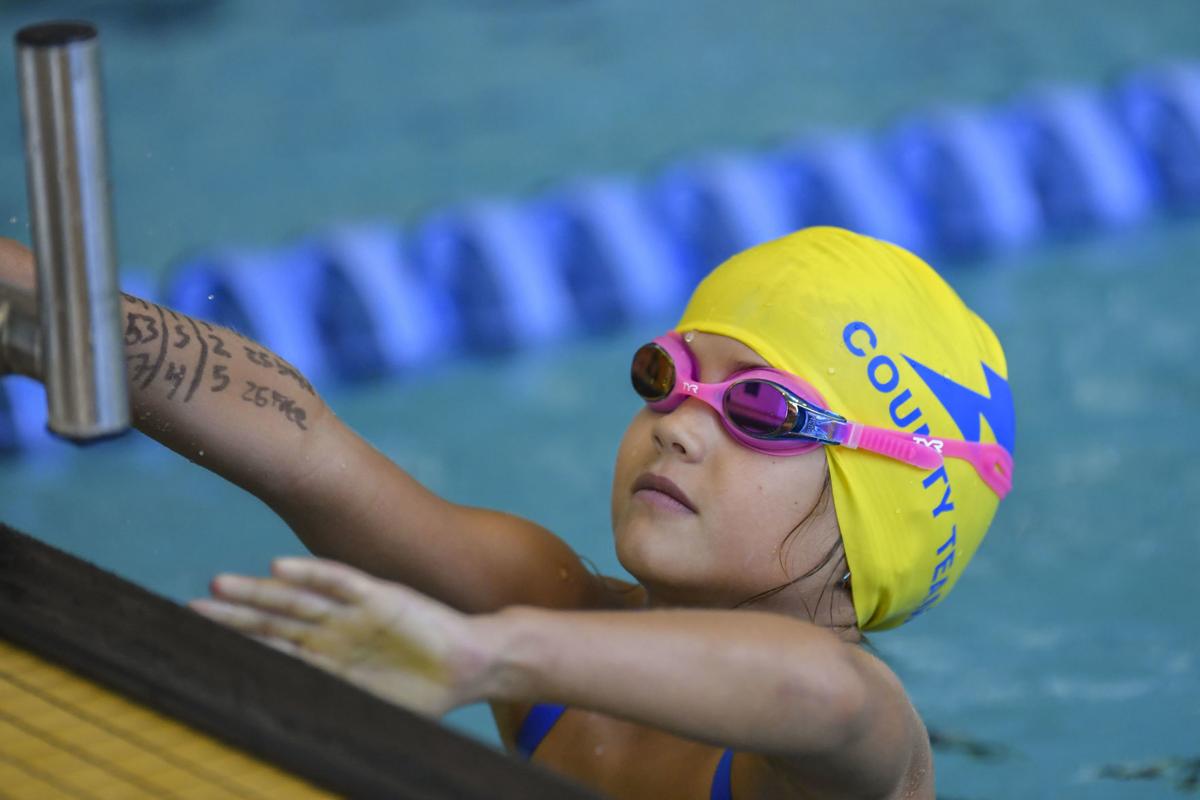 Ellie Hasic of Edgewater swims in the girls 6 and under 25m backstroke during the Gwinnett County Swim League Championships Sunday at Georgia Tech. Photo: Dale Zanine 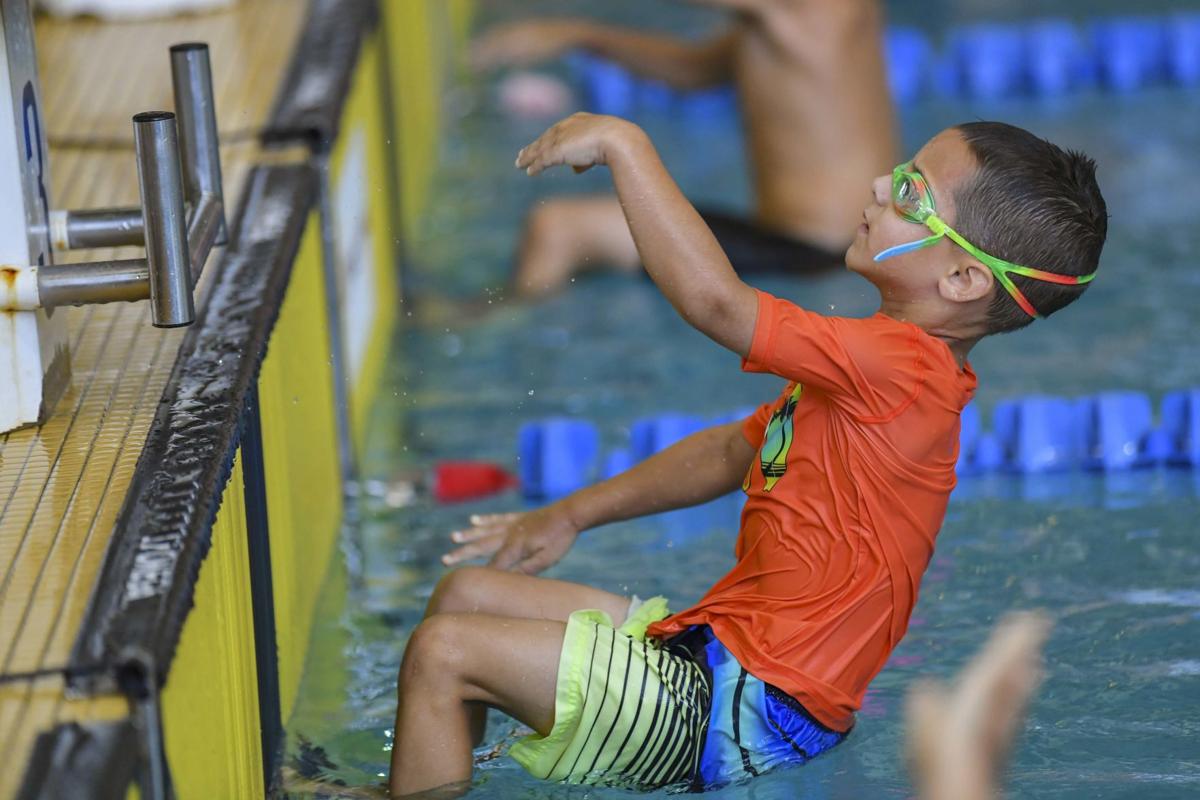 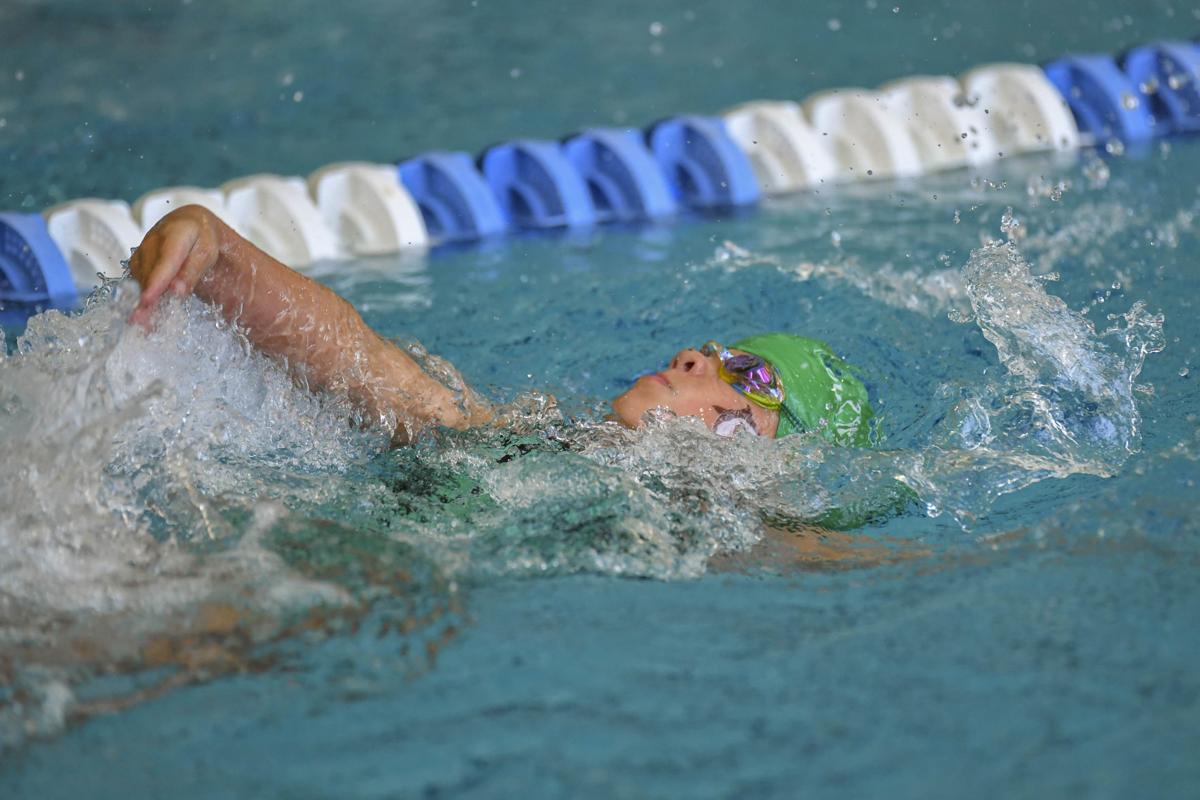 Spalding Corners swimmers and coaches react after accepting the trophy for winning the championship of the Gwinnett County Swim League Championships Sunday at Georgia Tech.

Ellie Hasic of Edgewater swims in the girls 6 and under 25m backstroke during the Gwinnett County Swim League Championships Sunday at Georgia Tech. Photo: Dale Zanine

The co-coaches for Spalding Corners guided the Sharks to their first Gwinnett County Swim League championship Sunday and had the worn-out vocal chords to prove it.

“My voice is shot,” Dunn said with a scratchy laugh.

Spalding Corners separated itself in the final session Sunday at Georgia Tech’s McCauley Aquatic Center. The Sharks one-upped the predictions and won by 134 points over Lansmoore (3,419.50 to 3,285.50). The Thunderbolts were third, 215 points back. Wild Timber and Chateau Elan rounded out the top five.

“We were supposed to lose by 96 points. We knew we were the underdog. We were seeded third place for the meet. So we still had a bit of a hill to climb.”

Spalding Corners finished with 214 more points than it was expected to based on the numbers entering the season finale.

“That was something, to me, that was impressive,” Dunn said. “That was points that were actually scored that we weren’t originally supposed to score.”

The pivotal session came from the 8-and-under group.

“We jumped up about 70 points after our 13-and-up session, which is always the hardest to maintain because you have a lot of kids who haven’t hit their best potential times yet,” Dunn said. “The 8-and-unders was our standout session. We jumped up to 111 points ahead there and basically by the time we got to 11-12, they just took off.

“So our Day 2 session was stronger. We actually did not take over the meet under the girls 11 freestyle in the 11-12 session, so the very last session, was where we jumped up from second to first. We were trailing the whole time. We were third after 13-up and then second after the 8-and-under session.”

One of the most emotional moments, even more so than when the title was officially theirs, came from that age group.

Spalding Corners had never won a relay before this weekend. The Sharks had been seeded first many times, but couldn’t quite break though. They won the boys 7-8 freestyle relay by three seconds and the medley relay by five seconds.

“We were crying,” Hildebrand said.

Of the 203 entries for Spalding Corners, 156 had their best times at the season’s biggest meet.

“The only thing we focus on is best times,” Hildebrand said. “Swimming is dictated by time. You could finish first place and if you add time, that means we didn’t do our job and you didn’t do your job. We aren’t going to celebrate that. But if you finish dead last and drop five seconds in a race, we’ll carry you around the pool.

“The winning, it’s a nice blessing, don’t get me wrong, but that has come directly out of the fact that every single meet, the kids know they’re racing the clock and the chips all fell in place.”

Hildebrand took over the Sharks program 15 years ago.

“When I started with Spalding Corners, we were dead last in the league,” he said. “We had 80 kids. So it’s taken 15 years for us to get this.”

Dunn was a swimmer for the team first and 11 years ago became a coach. They’ve been co-coaches for the last five years, which have all seen Spalding Corners finish in the top five at county.

“I remember not being able to win our dual meets,” Dunn said. “Going from that to the last seven years, we have not lost a dual meet in our division. We’ve gone 42-0 in dual meets, but county, we got third last year and second the year before.”

“You can’t win one of these unless all four sessions swim well,” Hildebrand said. “We’re very open with the kids, that, look, here are the numbers and we have chance. So the kids knew every session we had to go plus points. The 8-and-unders are the ones that really caused us to jump up and over, but if every session hadn’t pulled their weight, we wouldn’t have won it.

“That’s what happened the last couple of years. We would have two or three great sessions and then you’d have that one session where things just don’t go well.”

Only Lilah Collins, in the girls 9-10 age bracket, finished in the top three individually (with 90 points on her own), which made the title a cumulative effort. The Sharks had kids who were seeded 31-50 that moved up into the top 30 to score points.

“That was really where we were able to take over,” Dunn said. “Every year we set a goal for how many best times they need to get for the season. Our goal for the season was 1,350. This year we got 1,464 best times. That’s all season long kids improving. Some kids are never going to make it to county, are never going to be college level swimmers, but if they can improve and get better then that’s really what we’re all about.”

Spalding Corners offers an extra workout once a week. The coaches bring bagels, but that’s not what motivated the kids to show up. It was just a bonus.

“We already practice at 8 o’clock in the morning so that’s tough enough on the kids,” Hildebrand said. “But we do a 6:30 a.m. practice one day a week. It says a lot when we end up having 30 to 40 kids every Tuesday. It’s totally volunteer. We don’t put any pressure on them. They show up to do an extra practice, eat bagels, sleep in a lounge chair and then practice again.”

The ongoing effort of the Sharks and their parents is why Hildebrand has stayed for 15 years.

“This is a very taxing sport,” he said. “They practice every day. This is a parent volunteer league so our meets are run by the parents. A lot of them don’t get to watch their kids swim because they’re staging or they’re flipping burgers.

“We have absolutely the best parents. It’s, I think, what has kept me at Spalding Corners for 15 years. It’s what has kept Kailyn from going to any number of pools that have offered her jobs. We have a group of parents who are great with their kids, great with us and they believe in what we do. To me, this (title) is the biggest dedication to our parents.”

He also credited the club teams — SwimAtlanta, Dynamo and GAC — where many of their kids train year-round.

“It was very emotional,” Dunn said of the win. “The kids start with us when they’re 3 or 4. It’s not so much about — we both teach as well so you get them for a year and they move on — this is watching families grow up. There’s such a family dynamic. That means we have a very strong community around our swim team.”

Dunn and Hildebrand teach at Duluth Middle School and coach a lot of the same kids in the school programs from sixth grade on.

“It’s been nice to watch their kids grow up and have it pay off,” Hildebrand said. “We all all know this is not something guaranteed year after year so we have to savor it now.”

A number of meet records were set this year, including two each by Carson Waters and Jake Magahey.

In the boys 15-18 free relay, Cedar Creek’s Wes Carter, Nathaniel Stoffle, Will Mahone and Aidan Stoffle won in a county-record 1:23.99.

Scenes from Session 1 of the Gwinnett County Swim League Championships at Georgia Tech. (Photos: Will Hammock)