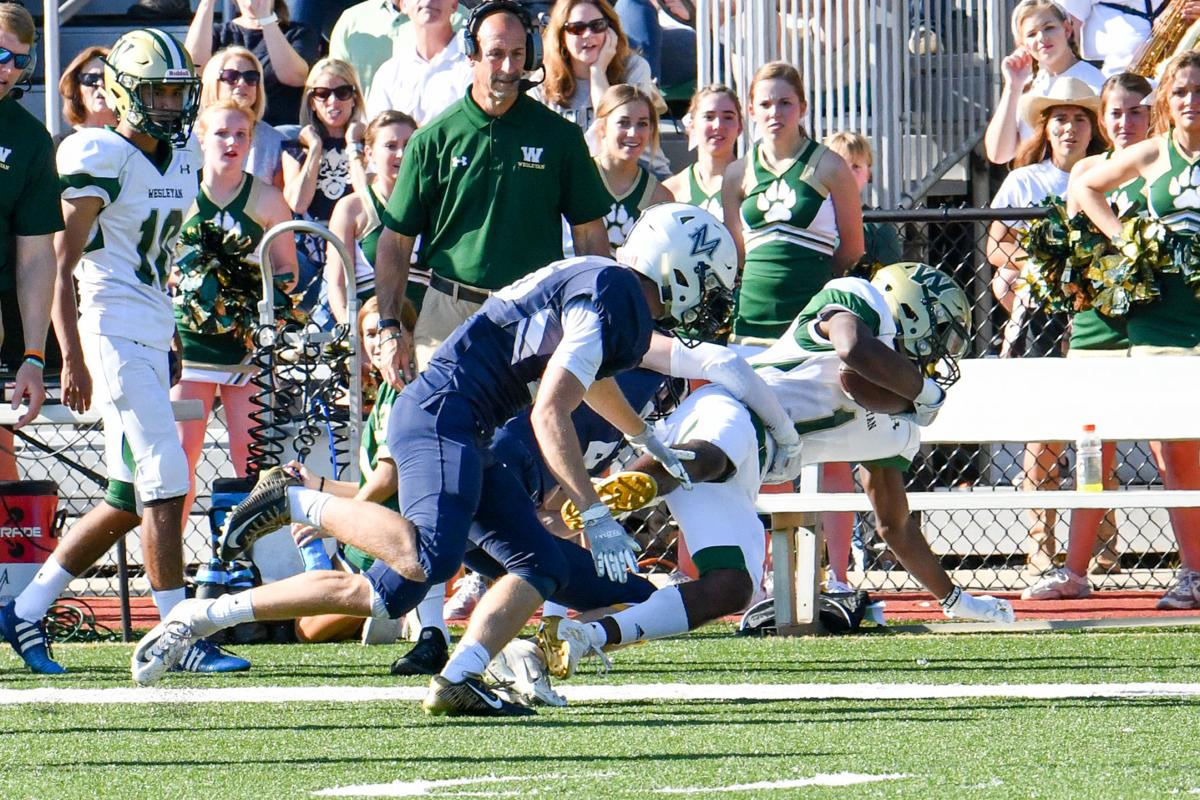 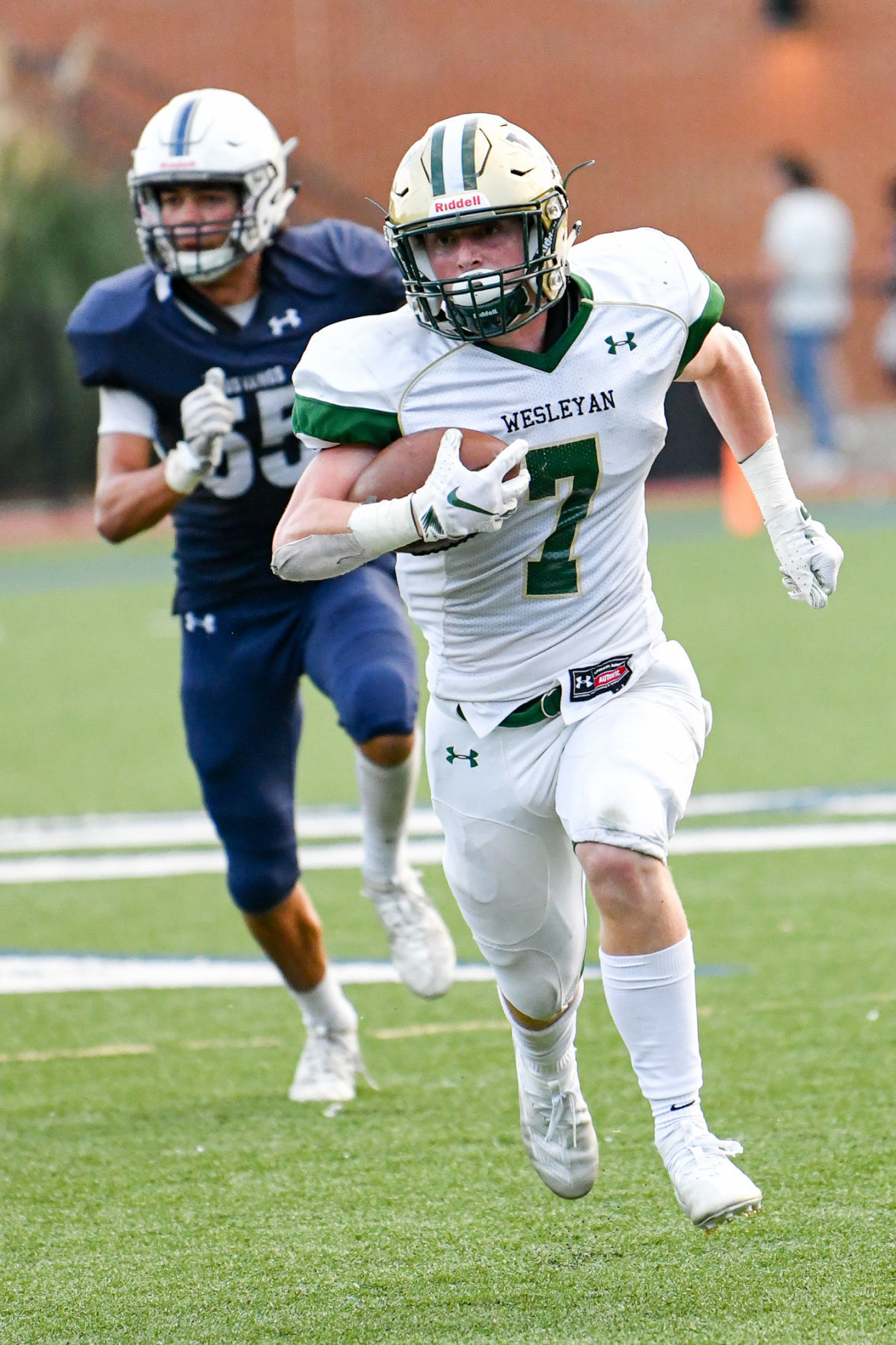 Wesleyan’s Cooper Blauser (7) charges for the endz one against Mount Vernon defenders in a game earlier this season. 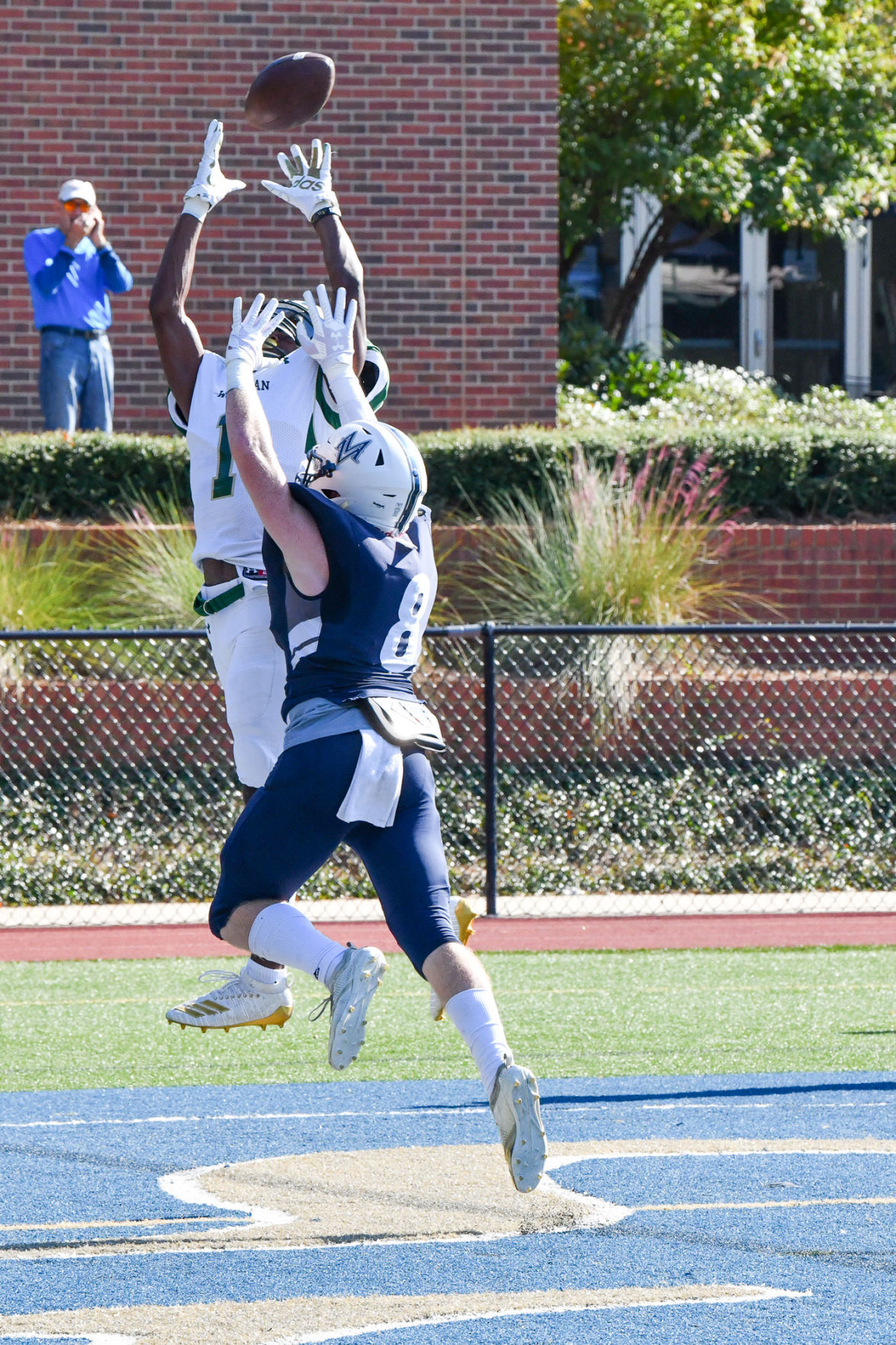 Wesleyan's Micah Smith goes up for the ball against Mount Vernon earlier this season. 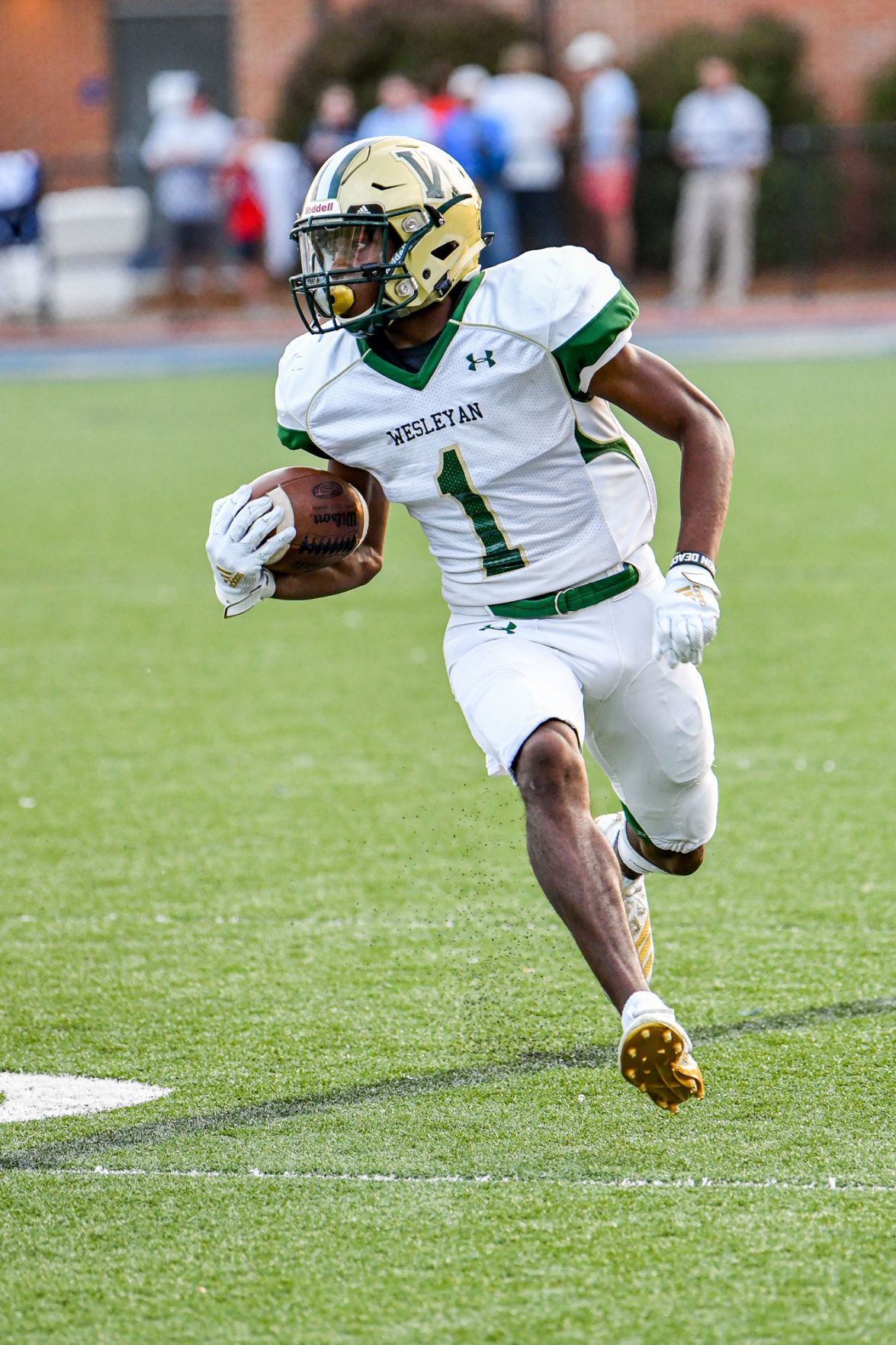 Wesleyan Micah Smith (1) accelerates towards the sideline with focus on the goal line. 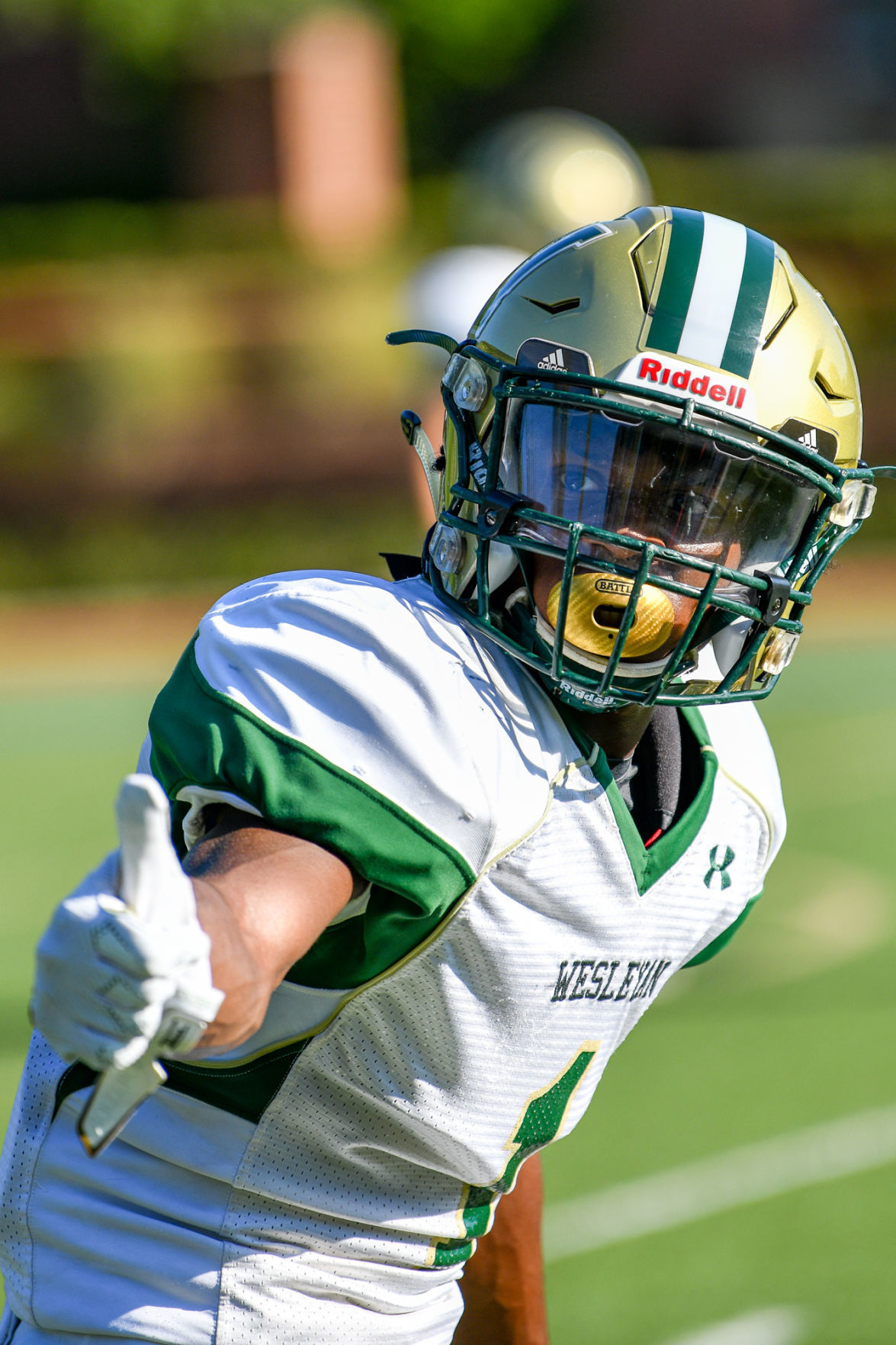 Wesleyan senior Micah Smith leads a talented, and deep, corps of receivers for the semifinal-bound Wolves this season. 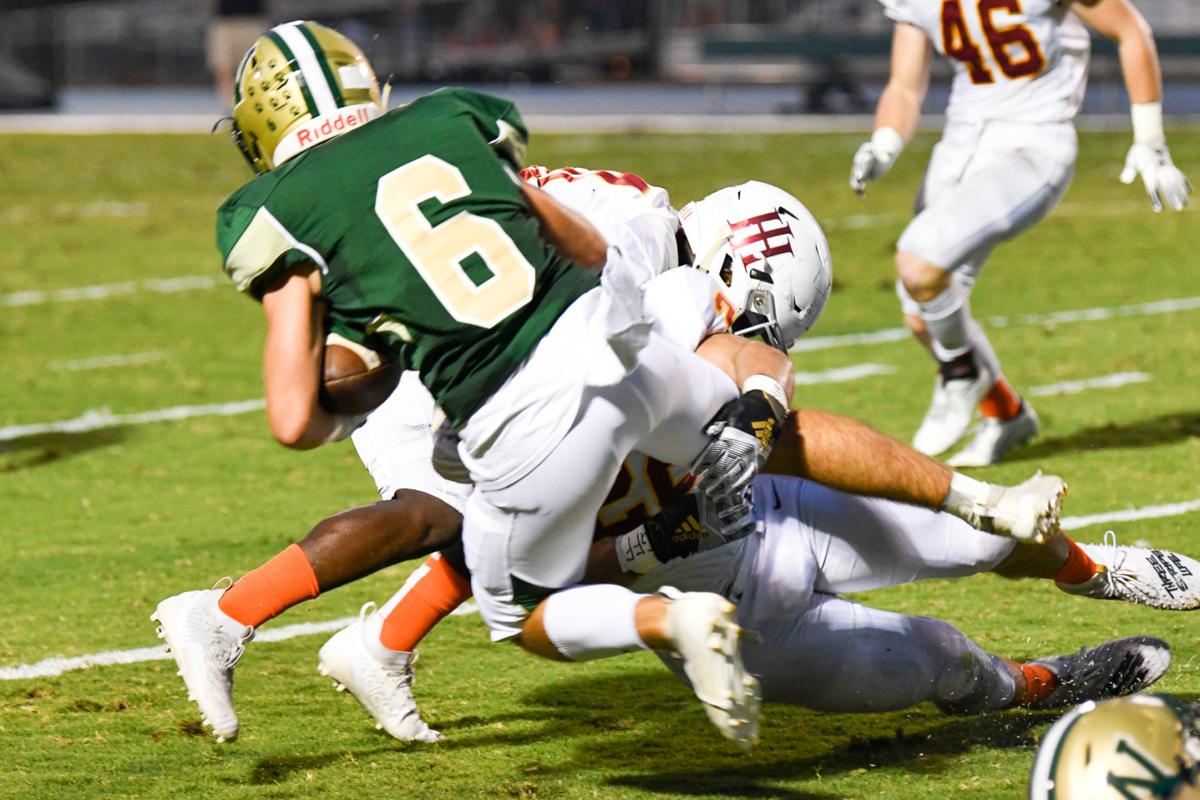 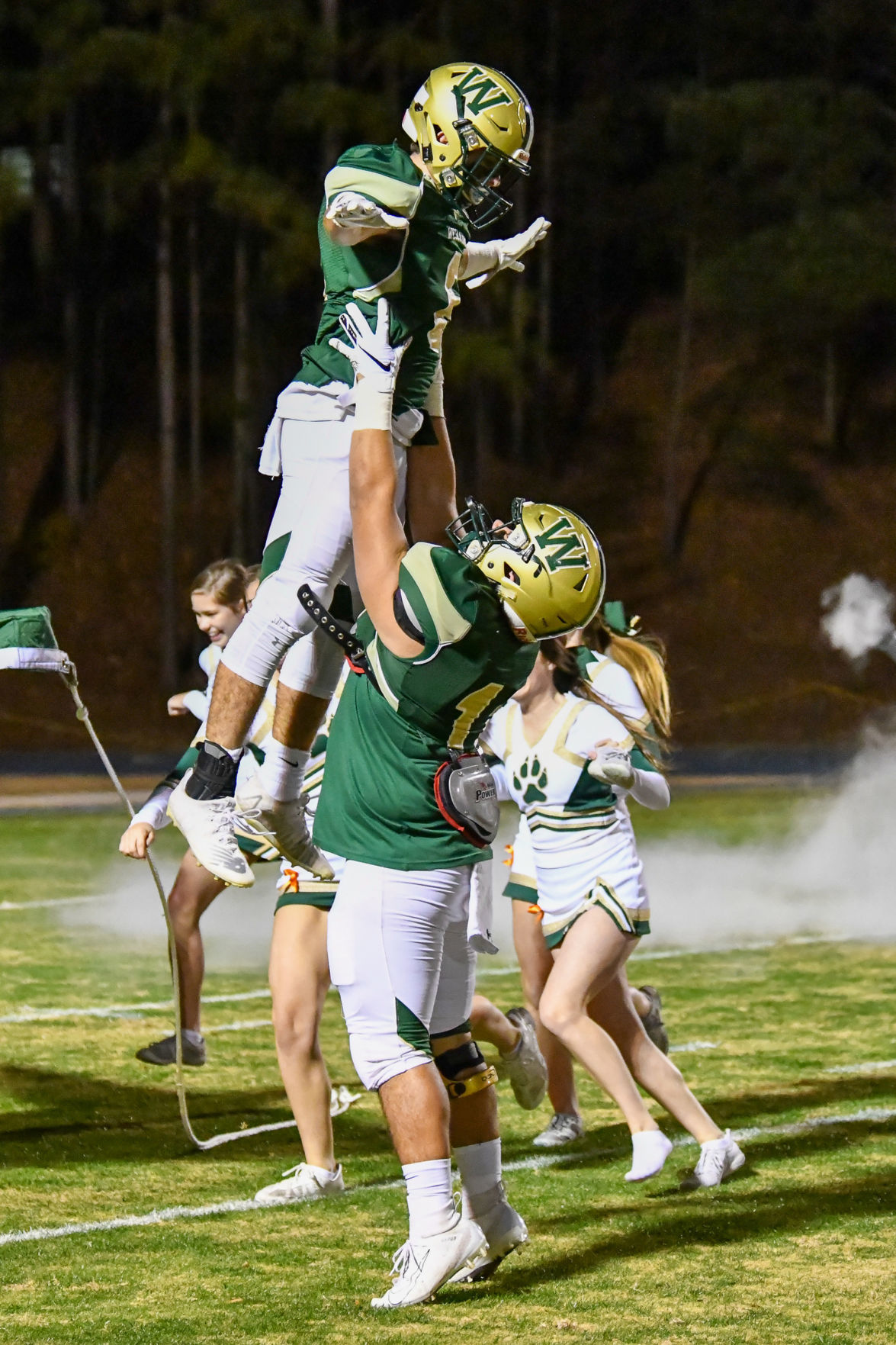 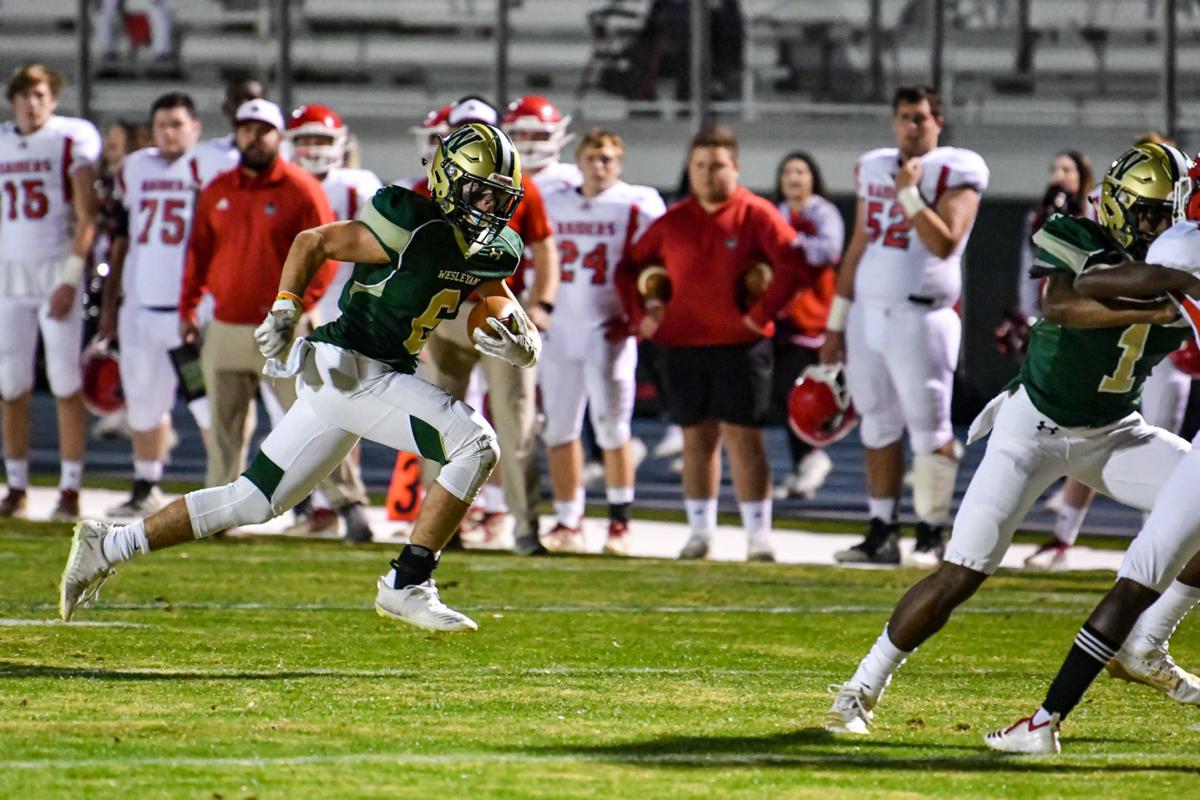 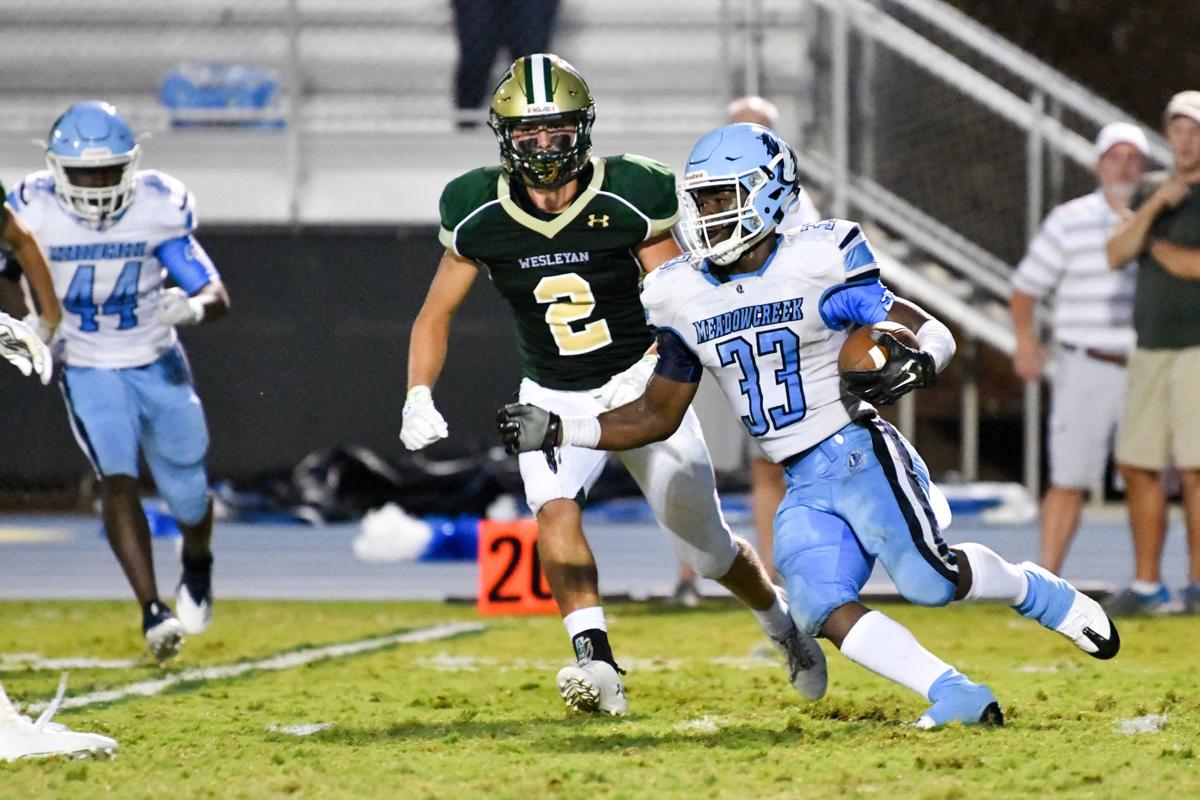 Wesleyan’s Cooper Blauser (7) charges for the endz one against Mount Vernon defenders in a game earlier this season.

Wesleyan's Micah Smith goes up for the ball against Mount Vernon earlier this season.

Wesleyan Micah Smith (1) accelerates towards the sideline with focus on the goal line.

Wesleyan senior Micah Smith leads a talented, and deep, corps of receivers for the semifinal-bound Wolves this season.

Smith was a multi-sport athlete when he arrived on campus three years ago. He went to Whitefield Academy as a freshman and came to Wesleyan when his mom, Jennifer Pinkett Smith, was hired as the school’s director of diversity.

“Here he comes, he doesn’t know anybody and he’s a little apprehensive about a new school,” Pridgen said “I’m not the most subtle person and he looked at me like, ‘You’ve got to be kidding me. Who is this enormous person?’ We got in my truck and we came out (to the practice field) because we were in the middle of workouts.

“We just kind of connected. He’s got a huge personality. He’s got a smile that lights up the world.”

Smith made it clear at the time, he was primarily a basketball guy, but Pridgen has seen a shift.

“I know how loves basketball, but I think the last three years playing football has shown him something,” said Pridgen, who played basketball at Washington & Lee. “I don’t know what it is, I just know he loves it out here as much as anybody — more than most perhaps.”

The senior leads a corps of talented receivers for the 11-2 Wolves, who are semifinal-bound after a 42-16 win over Savannah Christian last Friday.

“I love these dudes to death,” Smith said. “I’m just glad I’ve got a receiving crew like this, honestly, because I feel like if I didn’t, we wouldn’t be able to do the things we do on, and off, the field.”

Sophomore quarterback J.C. French has thrown for 2,408 yards to 13 different players this season. His primary targets are Smith and sophomore Cooper Blauser, but as soon as teams try to smother either of them, French finds Andrew Van Wie. Or Wyatt Hodges. Or Vance Nicklaus.

“I feel like the biggest thing for our receivers is if one of us has a really good game, our opponents are going to watch that film and think, ‘We’ve got to cover that guy,’” Blauser said. “Then, since we have so much depth, we can throw it to another guy if they’re double covering one of us.”

Van Wie, who moved from quarterback to receiver to best serve the team, has 20 catches for 227 yards and two touchdowns. Not eye-popping numbers. But the junior (wearing black gloves that say “open” in hot pink on the palms) has delivered repeatedly in crucial down situations.

“Andrew is our possession guy,” Blauser said. “Whenever we need a catch, he’s always the guy to go to. He has these gloves, it’s kind of an inside joke, these Waffle House gloves, and it’s always open.”

Hodges has 17 receptions for 180 yards and two touchdowns. One more junior, 6-foot-5 Nicklaus, gives French yet another outlet with eight grabs for 68 yards and two scores.

“Wyatt is very versatile and he’s quick,” Smith said. “Like Cooper, he’s sneaky. When one of us are having a bad game, that leaves him open a lot.”

Blauser has 841 yards, one more than Smith, and six TDs on 60 catches. He had a breakout game in Week 2 against Class AA Chattooga, returning the second-half kickoff 88 yards for a touchdown and adding two more on offense in the third quarter to salt away the win.

“He’ll go up and catch the ball whenever he wants,” Hodges said. “He’ll grab it and he’ll run you over, he’ll make a move on you — he does everything.

“We’ve got so many threats on the field and any of us can really have a game. You can’t really narrow it down. All of us have different aspects of our game we can show pretty well.”

Smith is the ideal leader for the group and Pridgen sees how he’s rubbed off on them.

“It’s almost like they’re inadvertently, or subconsciously, emulating what they admire most about him,” Pridgen said. “Cooper is an incredibly explosive player. Andrew and Wyatt both are so smart and so savvy when it comes to this game.

“Neither of them are going to outrun anybody. They don’t have the same speed that Cooper and Micah have, but dang if they’re always going to be open because their routes are so perfect.”

Last week, whenever Wesleyan needed a big first down, Van Wie was there. Hodges caught the first touchdown pass, an 18-yard swing play and the only score of the opening quarter.

“They played off of him and then saw him in the flat and said, ‘He’s not a threat,’” Pridgen said. “Next thing you know, he’s in the end zone.”

Smith came up with several spectacular receptions. His yards after the catch were equally impressive, including a 19-yard sideline grab-and-go to set up a second-quarter touchdown.

“I haven’t put a move on someone like that,” Van Wie said with a smile. “It all comes down to his work ethic in the offseason. He’s been working year round and it’s showing in how he’s performing in these games.”

Smith, who has 840 yards and 12 touchdowns on 57 receptions, does occasionally make a mistake. Smith already knew what Pridgen was going to say after he lined up offside and negate a big play in the second round against Christian Heritage.

“He’s just so likable and fun — and he loves this. He told me the other day, ‘I want this so bad, Coach.’ And he plays like it. It’s one of the reasons he’s a team captain and important part of our offense — and our defense. I couldn’t be more proud of him.”

Of course, none of the passing success would be possible without the Wolves stout, senior-led offensive line. They give French, and the receivers, the time they need to work.

“All these receivers, and maybe the whole team, has been underestimated for a long time,” Pridgen said. “We’re starting to prove some people wrong, some people who expected to be where we are and they’re not because of us.”