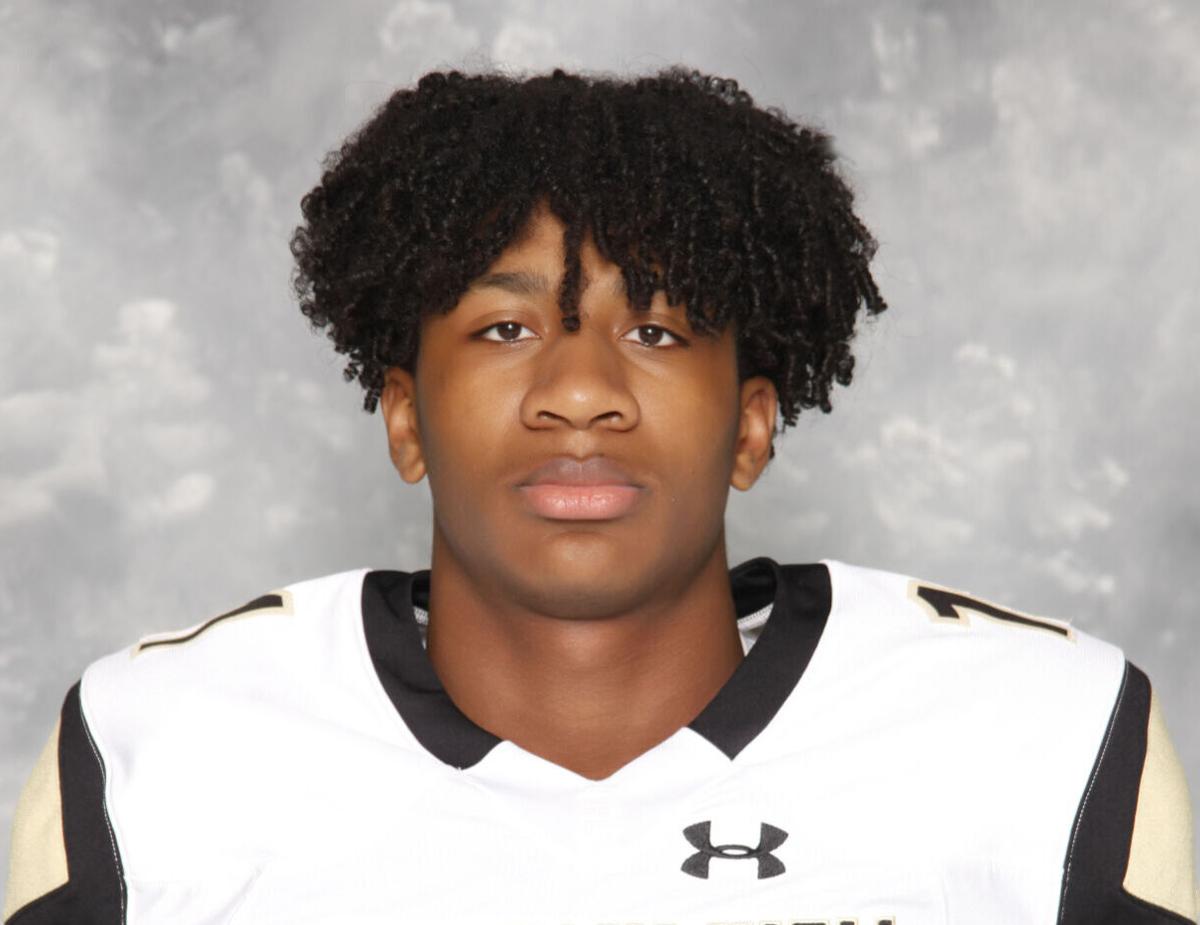 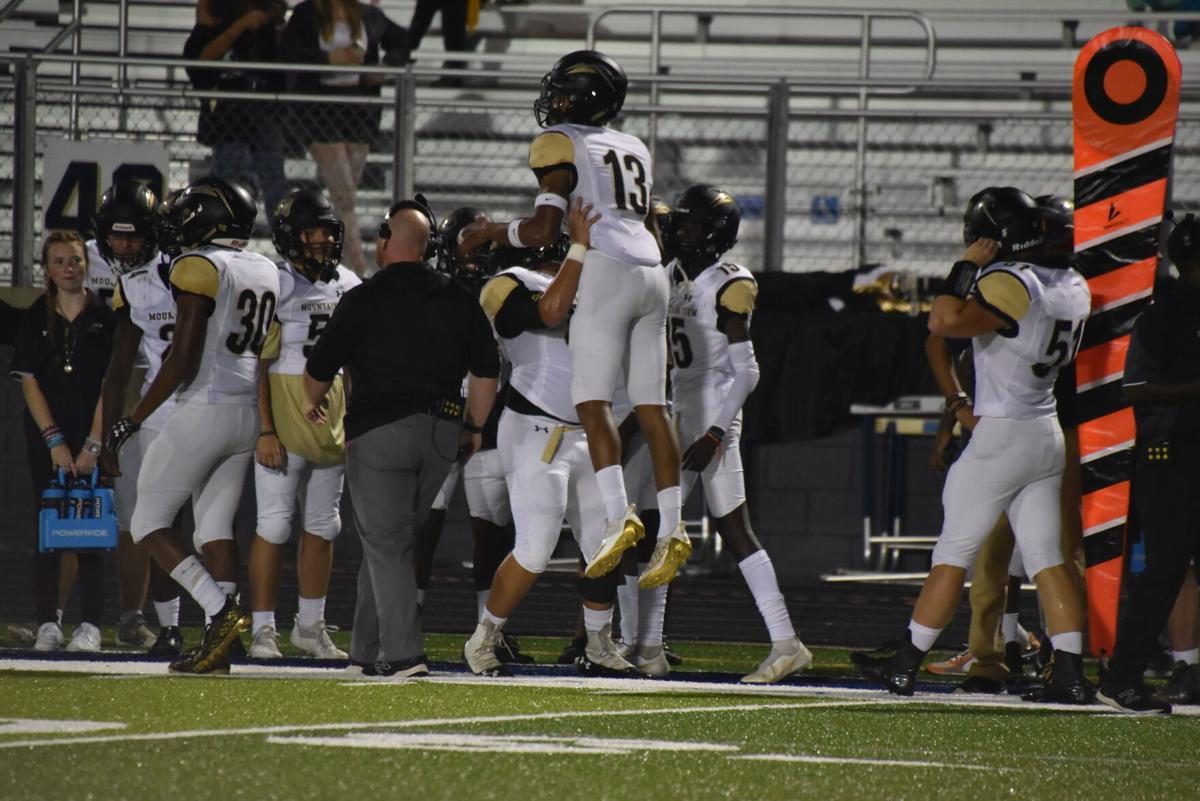 Mountain View's Santana Banner is lifted up by a teammate after an interception for a touchdown Friday against Dacula.

DACULA — All Mountain View quarterback Mason Kidd could do was stand in amazement of what his receiver Sean Reese did early in the fourth quarter.

Trailing host Dacula by four points, Kidd threw a quick pass to Reese, who after breaking a tackle, landed on top of a Falcons defender before regaining his feet and racing down the right sideline for a touchdown to give the Bears their first lead of the game.

“I was standing right in front of it,” Mountain View head coach John Poitevint said of Reese’s touchdown. “I said, ‘keep moving.’ He just rolled over on top of him. You see those things happen every now and then, but that’s the first time that it’s happened for me in a game. It’s just playing until the whistle.”

Behind strong play at quarterback from Kidd, who finished his night with more than 200 yards passing and two touchdowns, and lockdown defense down the stretch, Reese’s touchdown was the difference in a huge 24-21 come-from-behind win for Mountain View over Dacula.

“We practiced hard and we prepared our minds because (Dacula) was talking a lot before the game,” Kidd said after the win. “We didn’t really want to talk too much. We just wanted to come out and handle business.”

It wasn't the greatest of starts to the game for the Bears, who allowed a methodical 13-play, 65-yard touchdown drive their first time out.

Dacula made its presence known on the ground, rushing the ball all but one time before quarterback Jamir Beckom scored from one yard out to put the Falcons up 7-0 with 5:34 left to play in the opening quarter.

After a missed field goal early in the second quarter by the Bears, the Falcons made their first costly mistake of the night. Facing a third-and-15, Beckom threw an errant pass right into the hands of Mountain View’s Santana Banner, who scored easily to knot the game at 7-all.

Just three plays into Dacula’s ensuing possession, the offense made up for its mistake with a 77-yard touchdown run from standout Kyle Efford. Efford stiff-armed a Bears defender before racing down the left sideline untouched to put the Falcons back out in front 14-7.

Things went from bad to worse for the Bears on its next offensive possession. Kidd threw a strike to a Mountain View receiver on the first play from scrimmage only to have the ball stripped and returned for a touchdown.

Mountain View disputed the call with it appearing that the receiver never had possession, but the ruling on the field stood to extend Dacula’s lead to 21-7 with 7:46 left in the half.

That would be the last time the Falcons scored on the night, however.

On the ensuing Mountain View possession, Kidd went to work, completing all three of his passes for 68 yards including a 15-yard touchdown pass in the back middle of the end zone to Reese.

The touchdown strike to Wilson came one play after Kidd dropped a 44-yard pass into the hands of Terell Battle.

With momentum starting to swing in favor of the Bears after a pair of defensive stops to end the second quarter, the Falcons went into halftime leading the Bears 21-14.

After missing a field goal earlier in the game, Mountain View kicker Carson Vanhorn redeemed himself with a long kick that clanged off the crossbar and right goal post before falling in, trimming Dacula’s lead to 21-17.

With under a minute remaining in the third quarter and Dacula driving deep into Mountain View territory, a touchdown that would have put the Falcons up two scores was brought back for holding.

Instead of scoring, the Falcons were later forced to punt after a big third down stop by the Bears defense.

Despite pinning the Bears at their own 5-yard line following the punt, Kidd needed only one play to get his team out of harm's way.

A quick strike to Justin Wilson gave Kidd a 36-yard completion on first down. Four plays later, Kidd connected with Reese on what was the game-winning touchdown, a 38-yard catch-and-run to put the Bears out in front 24-21 with 10:01 left to play.

The Falcons had three chances on offense down the stretch to either tie or take the lead, but each time, the Bears defense answered the call. Those drives ended with a punt, a turnover on downs and an Eric Jones interception to seal the game in the closing seconds.

With four defensive starters out for the Bears, Poitevint gave a ton of credit to his defense for pitching a shutout in the second half.

“That was a really good football team that we beat, so I’m really proud of our guys for the effort,” Poitevint said. “We fought our tails off. We had four starters out tonight and guys had to step up. We really didn’t make a lot of adjustments. We just needed to play blocks better and tackle.”

Kidd finished his night with 232 yards passing and two touchdowns to bring his season total to 11. The effort also puts Kidd over 1,000 yards passing on the season.

The Bears improve to 3-2 on the season while the Falcons fall to 1-3.