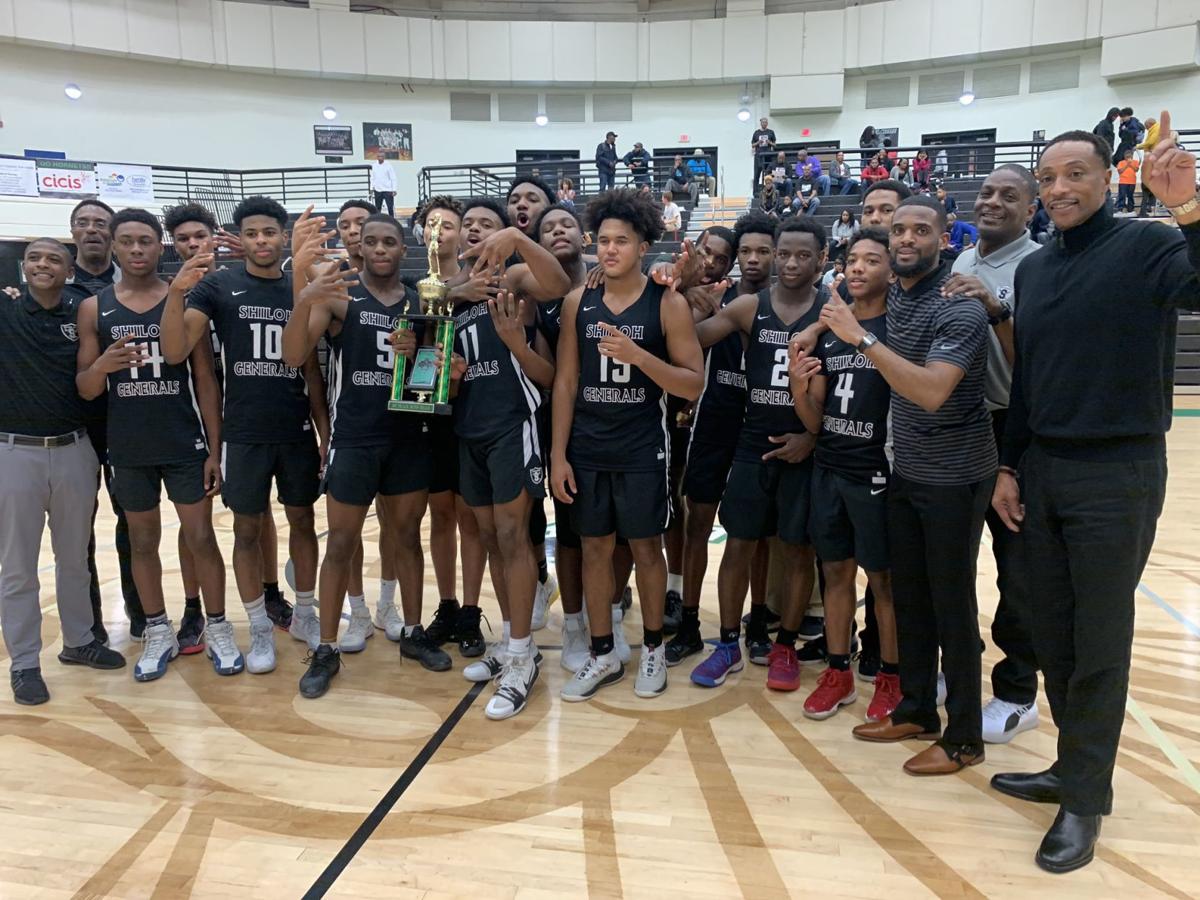 Shiloh’s boys basketball team posted an 83-52 win over Grady in the championship game of the Roswell Rotary Honor Air Invitational last month. The Generals are 13-0 so far on the 2019-20 season, which is a new school record for most wins to start a season without a loss. 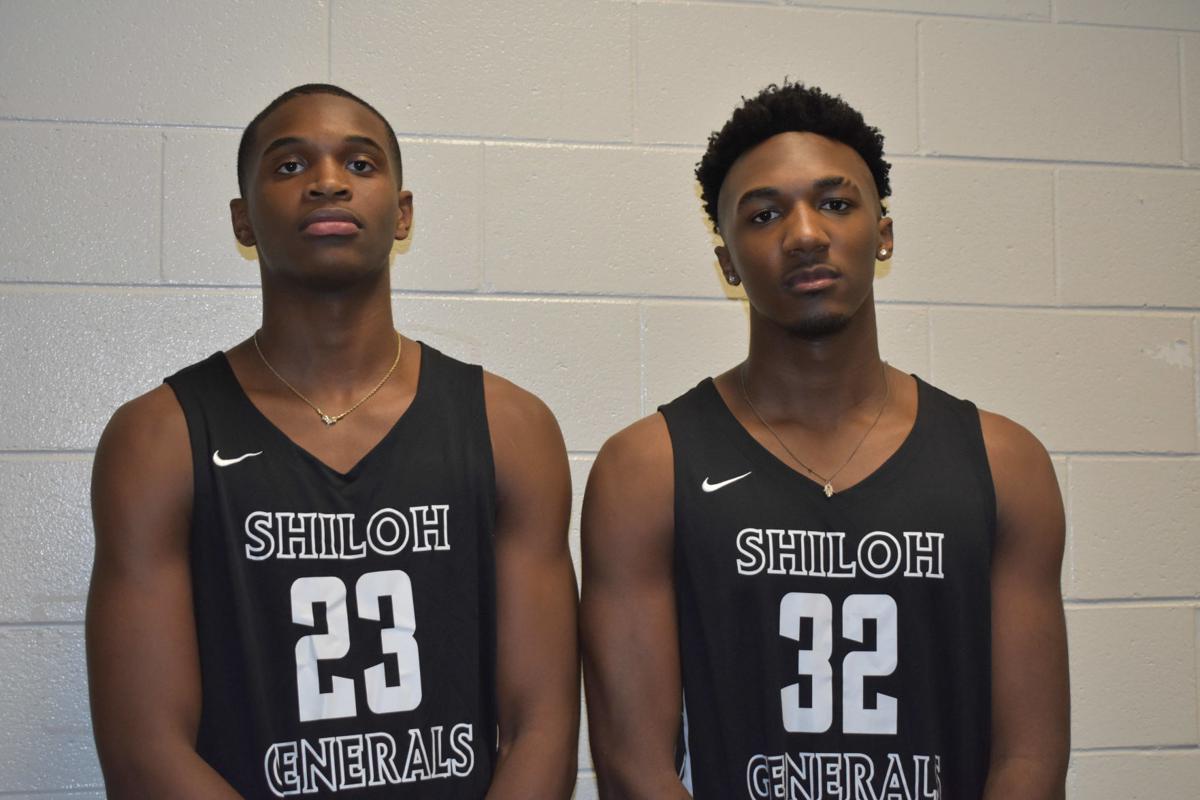 Shiloh’s Ezra Ausar (23) and Jordan Mitchell (32) pose for a photo at Gwinnett County Basketball Media Day at Norcross in October. The Generals are off to a 13-0 start thus far in 2019-20, a school record for most wins without a loss to start a season.

Shiloh’s boys basketball team posted an 83-52 win over Grady in the championship game of the Roswell Rotary Honor Air Invitational last month. The Generals are 13-0 so far on the 2019-20 season, which is a new school record for most wins to start a season without a loss.

Shiloh’s Ezra Ausar (23) and Jordan Mitchell (32) pose for a photo at Gwinnett County Basketball Media Day at Norcross in October. The Generals are off to a 13-0 start thus far in 2019-20, a school record for most wins without a loss to start a season.

The Christmas break is often a good time for many high school basketball teams, including those from Gwinnett County, to take assessment on how the season is going thus far.

So far, so good for a number of the county’s teams, including six — three each among the boys and girls — that are still undefeated heading into the holidays.

Some of those teams are used to being undefeated this deep into a season, such as the girls teams from Collins Hill (8-0, currently ranked No. 2 in Class AAAAAA in the most recent Kyle Sandy/Georgia Sports Writers Association state poll) and Buford (11-0, No. 1 in AAAAA) and the Norcross boys (10-0, No. 2 in AAAAAAA).

Others are newcomers to such big starts to a season, like the Providence Christian boys (12-0, unranked) and Hebron Christian girls (10-0, No. 2 in A (Private) heading into Thursday’s game vs. Mt. de Sales), though the presence of multiple-state championship-winning coach Jan Azar, who left Wesleyan to take over the program last spring, may make the latter a little less surprising.

Then there is Shiloh’s boys team.

Fresh off a special football season that included the first 6-0 start in school history and the first state playoff berth in 16 years, the Generals’ basketball team is also off to a special start.

The program has had its share of big seasons, especially during the tenure of head coach Kim Rivers, including a two-year run from 2014-16 that wound up in trips to the state Final Four and quarterfinals respectively behind a roster that included current NBA standout Josh Okogie.

However, Shiloh’s current 13-0 start represents the most wins without a loss to start a season in school history since 2014-15 team won its first 20 games en route to the Class AAAAAA state semifinals.

Rivers isn’t surprised that his current Generals have experienced success so far this season. At Gwinnett County’s media day in October, he hinted this year’s team could be one of his best, at least since those teams midway through the 2010s.

What he is surprised at, however, is how quickly that success has come, especially having to incorporate some important newcomers like South Gwinnett transfer Zawdie Jackson (18.3 ppg) and Texas move-in Caleb Golden (17.8 ppg) into a roster that included veterans like senior guards James Little and Anthony Canada and junior forwards Ezra Ausar and Jordan Mitchell.

However, the blend of the newcomers, along with the late arrival of junior guard Antonio Meeks from the football team’s playoff run, has gone even more smoothly and quickly than he anticipated.

“I didn’t know we’d have the (team) chemistry we have already,” Rivers said. “They enjoy playing together, and that’s a sign of something special when the kids want to buy in.

“They share the ball. They’re not worried about points. They’re just working the right plays and communicating well on defense and just getting better every day.”

Rivers knows keeping the undefeated streak won’t be easy. In addition to a holiday schedule that includes games against traditional state powers like Pebblebrook and East Coweta, the Generals also will have to battle through a Region 8-AAAAAAA slate that includes current No. 1 state-ranked Grayson, No. 10 Newton and a solid Archer team.

“Every game is going to be a dogfight,” Rivers said of the region schedule. “If you take any team for granted, you’re going to be in a lot of trouble.”

Speaking of Grayson’s boys, the Rams’ (10-1) made a move up the national rankings with their convincing 83-57 win over defending AAAAAAA state champion and national top 10 team McEachern at the Hawks-Naismith Holiday Classic last Saturday at Norcross’ House of Blue.

The win — which was bolstered by a 24-point, seven-rebound outburst by Caleb Murphy, a triple-double by Ian Schieffelin and another strong game from Deivon Smith and Toneari Lane — moved Grayson up to No. 15 in the current MaxPreps national Top 25, and will likely move them further up in USA Today’s Super 25 than their current No. 24 standing once that poll is updated.

Among the other Gwinnett teams keeping an eye on the update national rankings are the Norcross boys, currently just on the outside looking in the MaxPreps poll at No. 30, and the Buford girls, who are ranked No. 21 in MaxPreps’ computer rankings, though the Wolves are not currently ranked in the MaxPreps poll of experts.

Another team in the midst of a historic start to the season is the Discovery girls team, whose 10-2 start following Monday’s win over Central Gwinnett has surpassed the best start in the school’s brief history set just last year at 7-3.

And second-year coach Kandra Bailey reached a special milestone over her own two games early when the Titans gave her the 100th win over her head coaching career with a 36-35 win over Duluth.

Bailey is now 22-15 since taking over the Discovery program last season, and is 102-39 overall, including her four seasons as head coach at Pearl-Cohen High School in Nashville, Tennessee.