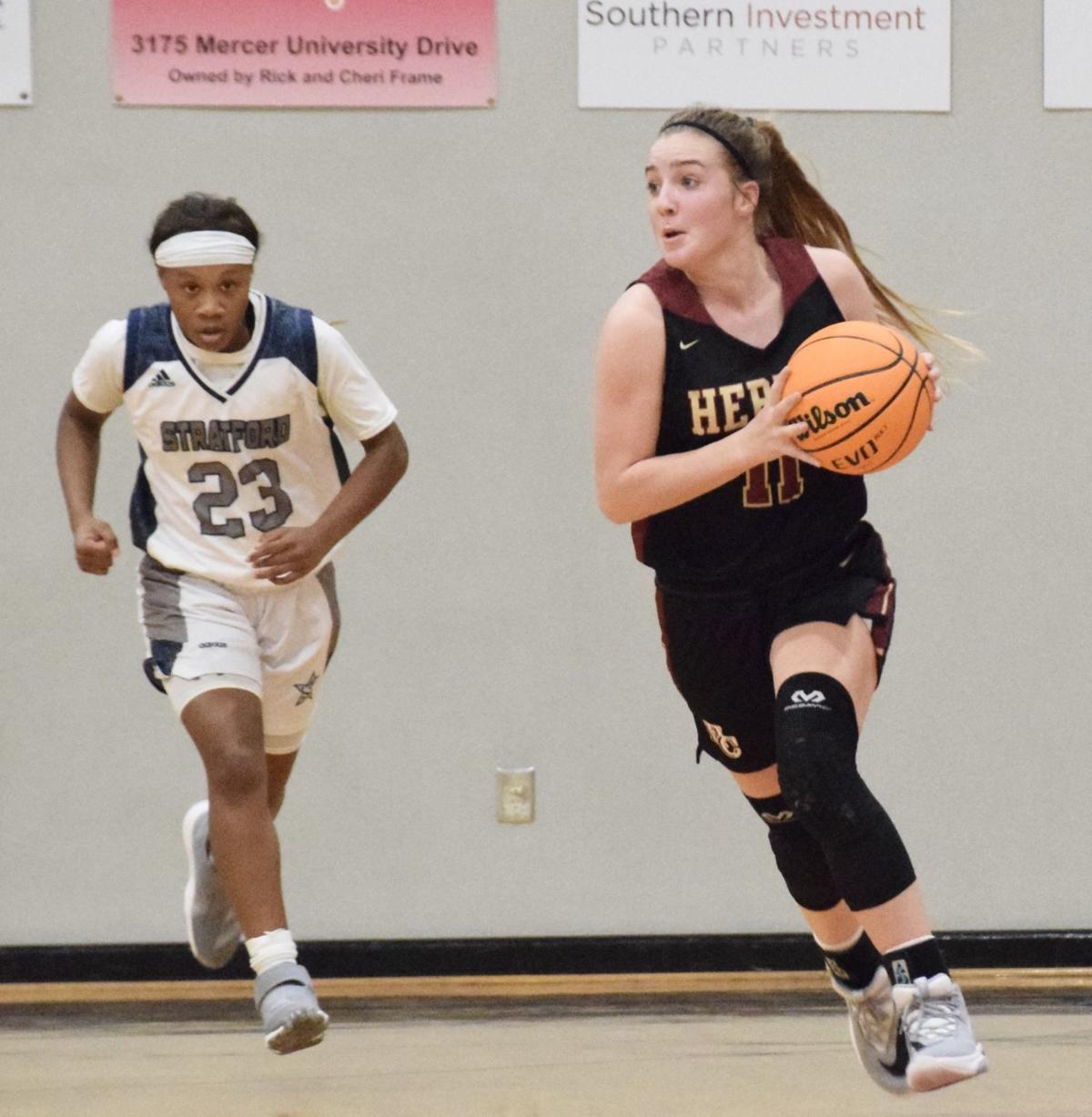 Hebron Christian guard Carly Fahey drlbbles the ball up the court during a game earlier this season. 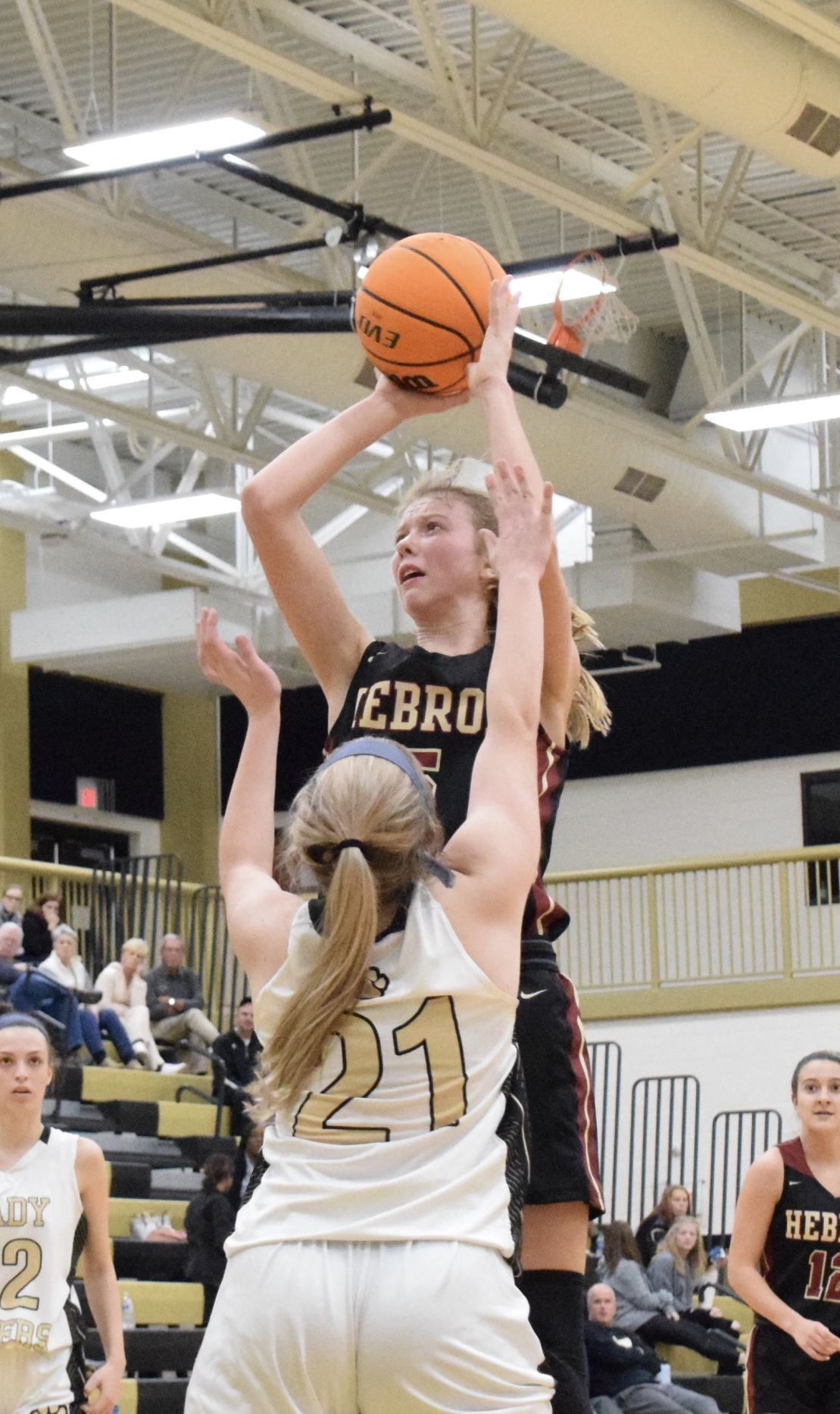 Hebron Christian forward Carly Heidger takes a shot during a recent game. Heidger and the Lions are within reach of a some program single-season milestones heading down the home stretch of the regular season.

Hebron Christian guard Carly Fahey drlbbles the ball up the court during a game earlier this season.

Hebron Christian forward Carly Heidger takes a shot during a recent game. Heidger and the Lions are within reach of a some program single-season milestones heading down the home stretch of the regular season.

There was never a doubt that the addition of new head coach Jan Azar, who had built Wesleyan into a state powerhouse, and a few newcomers on the court would have a positive impact on Hebron Christian’s girls basketball program.

That the impact would be so great, however, might have been a little less certain, at least in the beginning of the season.

The Lions just reached one milestone with their 72-33 win at Athens Academy on Tuesday night behind 19 points from Jessie Parish and 18 points from Malia Fisher, and moved one step closer to an even bigger one.

The win not only moved Hebron’s season-long winning streak to 22 straight games, which matched the 2006-07 team for the second-most wins in a single season since Hebron began GHSA competition in 2004-05 season.

And with three more regular season games, plus the Region 8-A and Class A (Private) state tournament still ahead, the school record of 26 wins, set by the Lions’ 2004-05 team, which went 26-4 en route to a berth in the Class A state Final Four, is very much within reach.

Remaining undefeated throughout even the regular season, much less the entire season, will be a tougher challenge.

However the fact that both those milestones, as well as making a serious run at the school wins record, are even possible at this point is beyond what Azar thought was possible for her inaugural season, even with the addition of newcomers like Parish and her daughter Nicole from Wesleyan, Fisher from North Gwinnett and Carley Fahey from King’s Ridge to a solid nucleus of holdovers.

“I definitely knew we could be good, but I … didn’t expect to do what we’ve done (so far),” said Azar, who is approaching a numerical milestone of her own after Hebron recorded the 593rd win of her coaching career Tuesday. “Now, that I’ve seen what they can do, I’m not as surprised. This is a very talented and cohesive group. They don’t compete against each other, they only compete with their opponents.”

Big games looming FridayWith only about a week more left in the regular season, seemingly every remaining game has implications for the region standings and the upcoming region tournaments, and perhaps beyond.

There will be two games, in particular, that will be among the marquee games among Friday’s slate for Gwinnett County’s teams.

The rematch Grayson (20-1, 6-1) and Shiloh (20-1, 6-1) at Shiloh is big for reasons even beyond the fact sole possession of first place in the Region 8-AAAAAAA boys standings is on the line.

There are also state implications, with the Rams currently Class AAAAAAA’s top-ranked team and the Generals right behind the at No. 2.

There will also be a lot of eyes on Friday’s game from behind Georgia’s borders based on two sets of national rankings.

Grayson has moved up to No. 5 in this week’s MaxPreps Xcellent 25 national rankings, while Shiloh is barely on the outside looking in at No. 29, while the Rams come into the game at No. 8 in ESPN’s top 25, and the Generals have broken into this week’s rankings at No. 25.

Grayson won the first game between the two teams 72-60 Jan. 3 at Grayson.

Meanwhile, the top two seeds in the upcoming Region 8-AAAAAA girls tournament will likely be decided when No. 4 Dacula (20-2, 7-0) visits defending state champion Lanier (13-9, 6-1) on Friday.

Two two teams have actually met twice already this season, with the Falcons beating the Longhorns both a non-region game 51-47 in the Andrew Johnson Bank Classic in Greeneville, Tennessee, on Dec. 31, as well as their first region meeting 45-42 at Dacula on Jan. 7.

Ezumah, Longhorns on the mend

When Lanier’s girls square off for their rematch with Dacula, they will be pretty much back to full strength for the first time since last summer.

That’s because that while 6-foot-3 senior post Christabel Ezumah had returned to the lineup following offseason knee surgery weeks ago, she was only cleared of her minutes restriction by doctors just prior to the Longhorns’ game against Winder-Barrow last Friday.

In the three games since, she has posted three straight double-doubles and has averaged 11.3 points, 14.3 rebounds and 6.7 blocked shots per game, all Lanier victories.

In fact, since the first of the new year, Ezumah is averaging 9.1 points, 11.4 rebounds and 4.9 blocks over the past seven games.

Combined with the full recovery from separate nagging injuries by fellow senior post Lizzie Campbell and senior guard Morgan Manley, head coach Tim Slater is convinced his Longhorns have turned a corner of sorts, and is better position to try to defend last year’s region and state titles.

“Just having everybody healthy and being together on the court, and not having to count seconds (with Ezumah) is big,” Slater said. “Lizzie had a stress fracture and didn’t play most of the summer with us. Morgan Manley had a hamstring problem, and we didn’t have here for a while. I think we’re finally able to jell, and we’re not being held back by outside forces like injuries.”

The results so far seem to back up his view, as the Longhorns have won their last six games, and have won seven of eight games since the new year.

The lone loss was the Jan. 7 loss to Dacula, which featured a tough battle between a still restricted Ezumah (4 points, 15 rebounds, 6 blocks in that game) and Dacula’s 6-3 sophomore Lazaria Spearman (12 points, 18 rebounds, 5 blocks).

Two county boys players reached the 1,000-point mark for their respective careers over the past week.

Most recently, Lanier’s Sion James reached the milestone while scoring a game-high 25 points during the Longhorns’ 83-52 road win at Winder-Barrow last Friday.

A day earlier, Grayson senior guard Deivon Smith posted his 1,000th career point during a 17-point outing in a 51-50 home win over Archer.