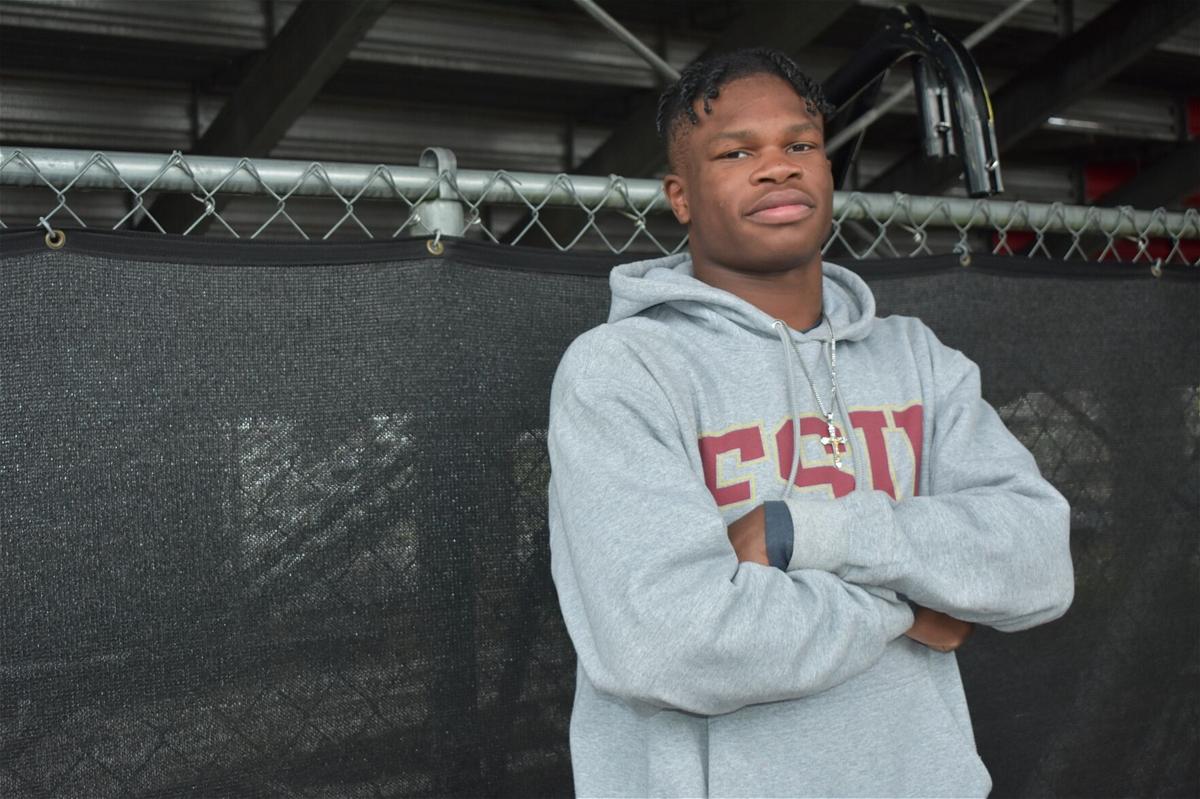 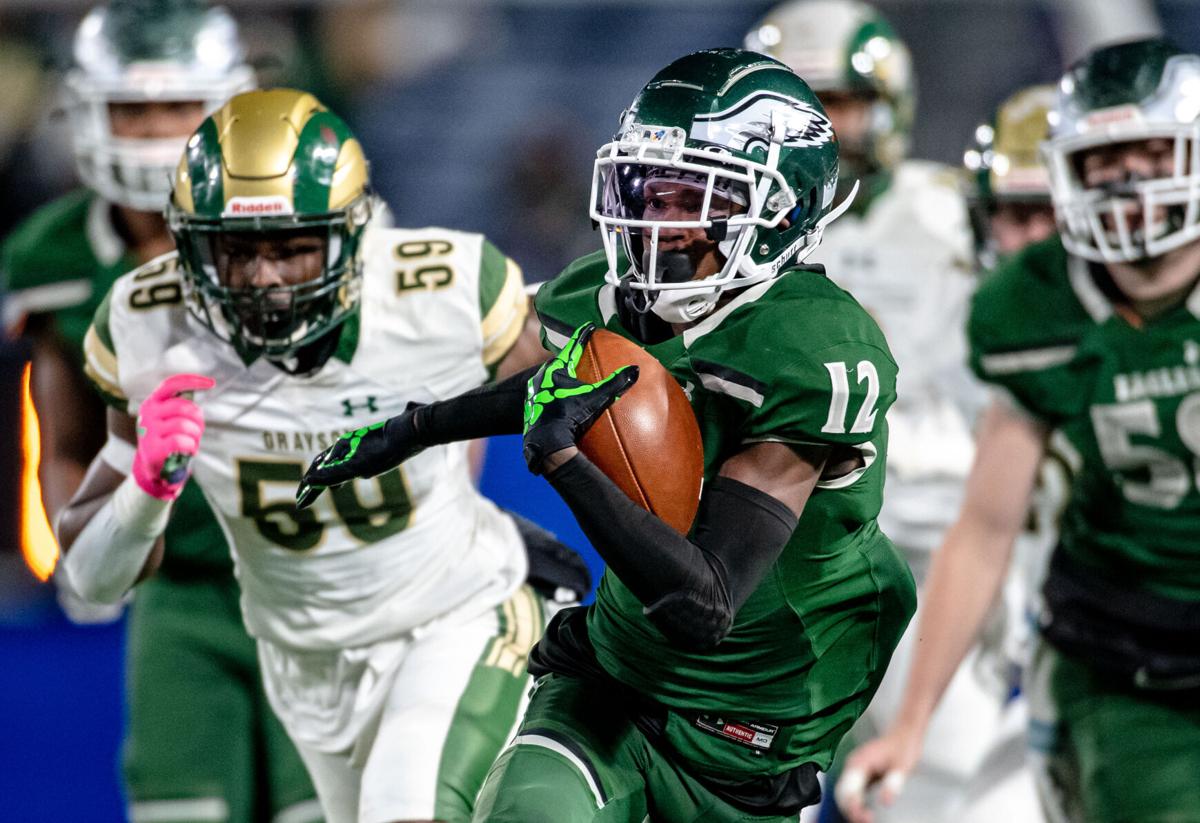 Not much went right for Collins Hill’s football team in the first half of the 2020 Class AAAAAAA state championship game, except for the most eye-catching play of the night, if not the season.

With the Eagles pinned deep in their own territory, quarterback Sam Horn dropped back into his own end zone and lofted a pass near the Eagles’ sideline at the 25-yard line. As Grayson’s Tyler Pugh lifted his hands for an interception, wide receiver Travis Hunter jumped high and snagged the ball with a one-handed catch that drew audible reaction from fans on both sides of Georgia State’s Center Parc Stadium.

Video of the reception quickly circulated on social media.

“I do it almost every day in practice,” said Hunter, the Daily Post’s Offensive Player of the Year. “It was just the same catch I’ve been doing.”

His coaches and teammates said that nonchalant response is pretty accurate. Those types of catches are a common occurrence.

“I’ve said it from the moment I met Travis, he’s a special football player,” Collins Hill head coach Lenny Gregory said. “Everything he does is so natural. It’s just God-given talent. He’s the most natural skill player, football player that I’ve ever seen in my life, that I’ve ever coached. We see things in practice that everybody else sees on Friday night. He does stuff in practice that stops the whole practice, like ‘Did you just see that?’ He’s like a highlight walking around. He makes catches like that in practice all the time. All the time. I’ve seen him do things in practice and you just shake your head. Unbelievable.”

By the end of the best season in Collins Hill history — it reached the state finals for the first time, finishing as runner-up to Grayson — Hunter had a season full of highlight plays on both sides of the ball.

The junior broke Gwinnett County single-season records with 137 catches for 1,746 yards and 24 touchdowns, in addition to rushing for another TD and throwing for two scores on trick plays. He got the season going with eight catches for 186 yards and three TDs in a Corky Kell Classic win over Carrollton, and torched Alpharetta for a combined seven TDs in two games, one in the regular season and one in the state playoff opener.

In a victory over Mill Creek that clinched the Eagles’ first region title since 2013, he had 10 catches for 187 yards and three TDs — at halftime. He followed with an 11-catch, 183-yard, three-TD game against Lowndes in the state semifinals, and finished the state championship game with another 11 grabs for 100 yards and a score.

When he wasn’t on offense, he was a lockdown cornerback on the Collins Hill defense. He intercepted eight passes, including a pick-six against Parkview in the quarterfinals, and had 51 tackles, following up a sophomore season when he had a Gwinnett-best seven interceptions.

“Defense is my primary position,” the Florida State commit said. “But I’m also good at receiver.”

Despite his offensive success — he also had 49 catches for 919 yards and 12 TDs as a sophomore — Hunter insists he plans to play defensive back at the college level. He has been equally impressive as a high-schooler on that side of the ball.

“(Hunter) shuts down a whole field. We play him to the field (side) on purpose,” Gregory said. “Most of the high school game is played on the hashes and he’s the corner to the field. If you’re brave, you feel confident and you throw it out there, there’s a good chance he’s going to pick it. So he really shuts down the field and makes people go into the boundary and the 12th man is the boundary.”

Collins Hill inherited Hunter’s potential when he moved from West Palm Beach, Fla., to Gwinnett County as an eighth-grader. He began playing football as a 4-year-old in an area rich on football talent, but he and his family wanted a change for reasons outside of football.

“A lot of killing,” he said about where he lived in Florida. “And it’s going on right now still. It was a bad environment.”

He initially moved into the Archer district, but landed permanently at Collins Hill for high school, and he has excelled on and off the field in the past three years.

Gregory learned pretty quickly about Hunter’s football talent, but he also has enjoyed his progression off the field.

“He continues to mature, but the biggest thing is he’s always been who he is,” Gregory said. “He’s a very confident young man, respectful. humble. He’s a very likable guy. He’s a good kid. You hang around him and you don’t know he’s the player that he is.”

He hopes to come back better than ever for the 2021 season as Collins Hill pursues the big goal it narrowly missed last season.

“The season was good,” Hunter said. “We didn’t finish with the outcome we wanted to finish with. We know we’ve got a lot to work on, so we’re ready to get back to work. Now we know what the standard is. We’ve got to get more than the standard, so we’ve got to win it all next year.”

The Daily Post's selections for the best in Gwinnett high school football from the 2020 season.