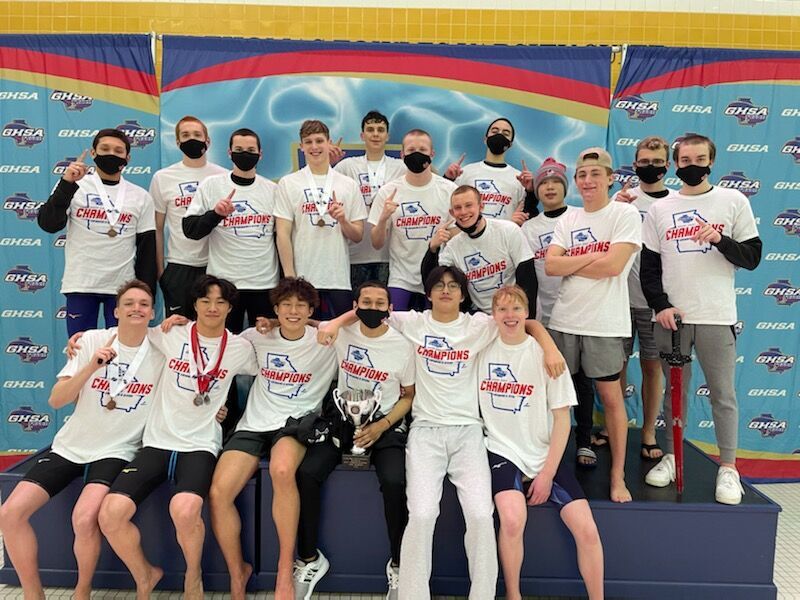 North Gwinnett swimmers, left to right, Luke Han, Blake Burnley, Ayden Meierarend and Emilio Rico pose for a photo after a runner-up finish in the 200 medley relay at the state meet Saturday.

North Gwinnett swimmers, left to right, Luke Han, Blake Burnley, Ayden Meierarend and Emilio Rico pose for a photo after a runner-up finish in the 200 medley relay at the state meet Saturday.

The repeat was sweet.

“This is sweeter (than 2020). It means a lot. It means it wasn’t a one-year deal. It means we have some staying power,” North coach Paul Callis said. “We wanted to show we’re more of a complete team than last year. Last year was a fantastic team. This year we wanted to show we had more firepower at the top.”

The Bulldogs didn’t win an individual championship, but their swimmers littered the podium and packed into the finals. By the time the scoring was done, they had 361.5 points, comfortably ahead of runner-up Alpharetta’s 308.5.

Parkview won an ultra-close battle for third with 301.5 points and Brookwood was fifth at 289, giving Gwinnett three of the top five boys teams in AAAAAAA. Peachtree Ridge (10th), Mill Creek (14th), Norcross (17th) and Collins Hill (20th) also finished in the top 20, but there was no question which team made the biggest statement.

“I’m just super proud of these boys,” Callis said. “To put up 361 points was huge. Last year we won with 319 and we made the challenge that we wanted to score big and we crushed it. We crushed it. The next team was 308 or something. We wanted to show there wasn’t any question who was the best team in the state.”

Parkview also celebrated a state championship with Gwinnett’s only relay win. The Panthers won the 200 medley relay in 1:33.36 with the foursome of Andy Zhu, Joshua Kim, Dylan Yin and Tyler Wooldridge.

North was second to Parkview in that 200 medley relay, took third in the 200 free relay and placed fifth in the 400 free relay. In addition to the three, top-five relays, the Bulldogs also excelled more in individual races in 2021.

“Our goal was to get on some podiums,” Callis said.