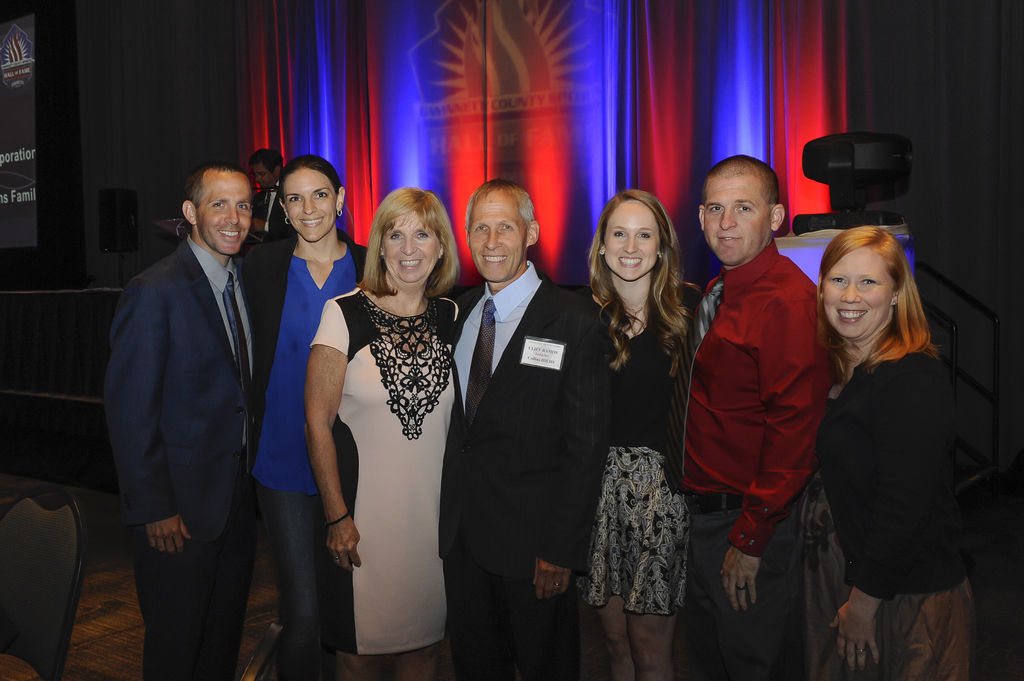 Retired Collins Hill, Meadowcreek and Greater Atlanta Christian School wrestling coach Cliff Ramos poses for a photo with his family during the reception of the 2016 Gwinnett Sports Hall of Fame at the Infinite Energy Center in Duluth. 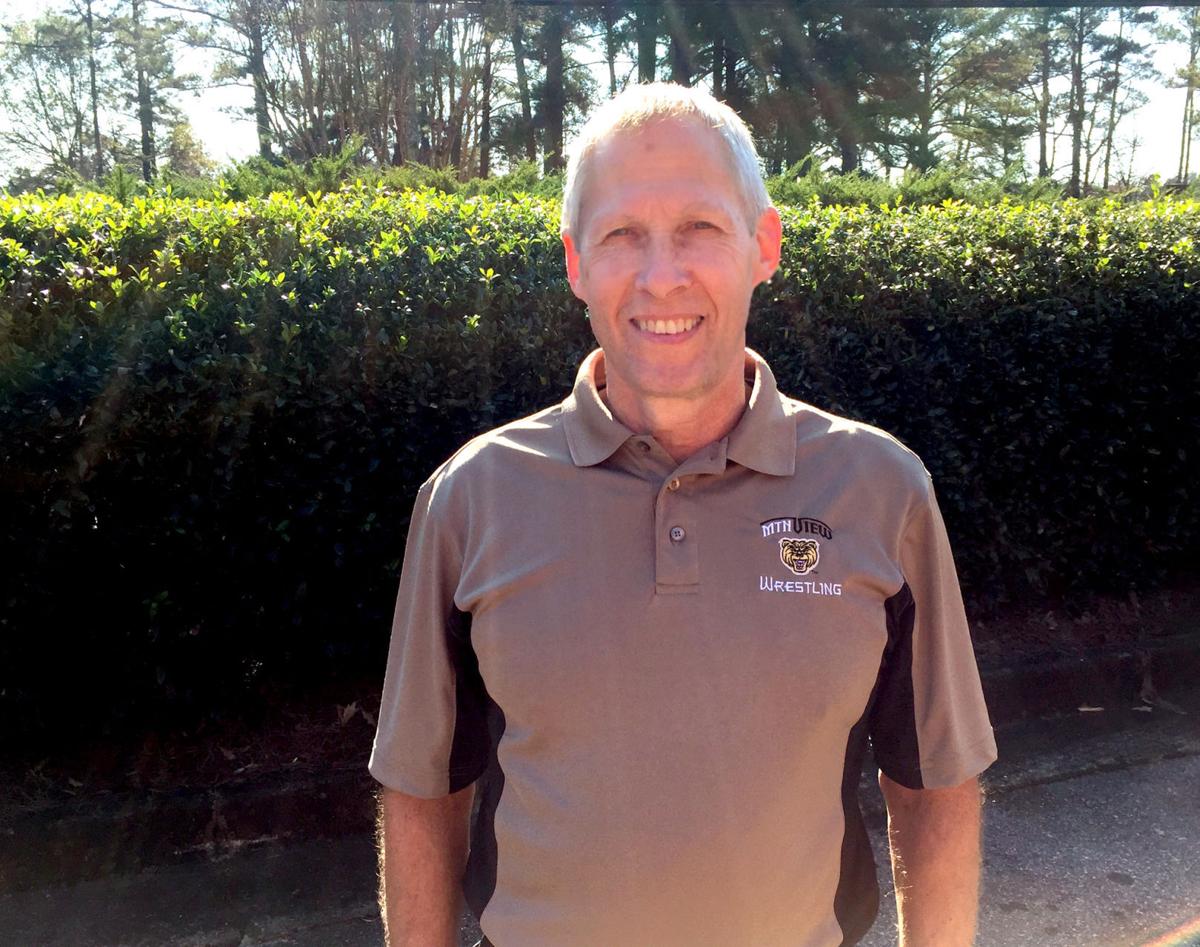 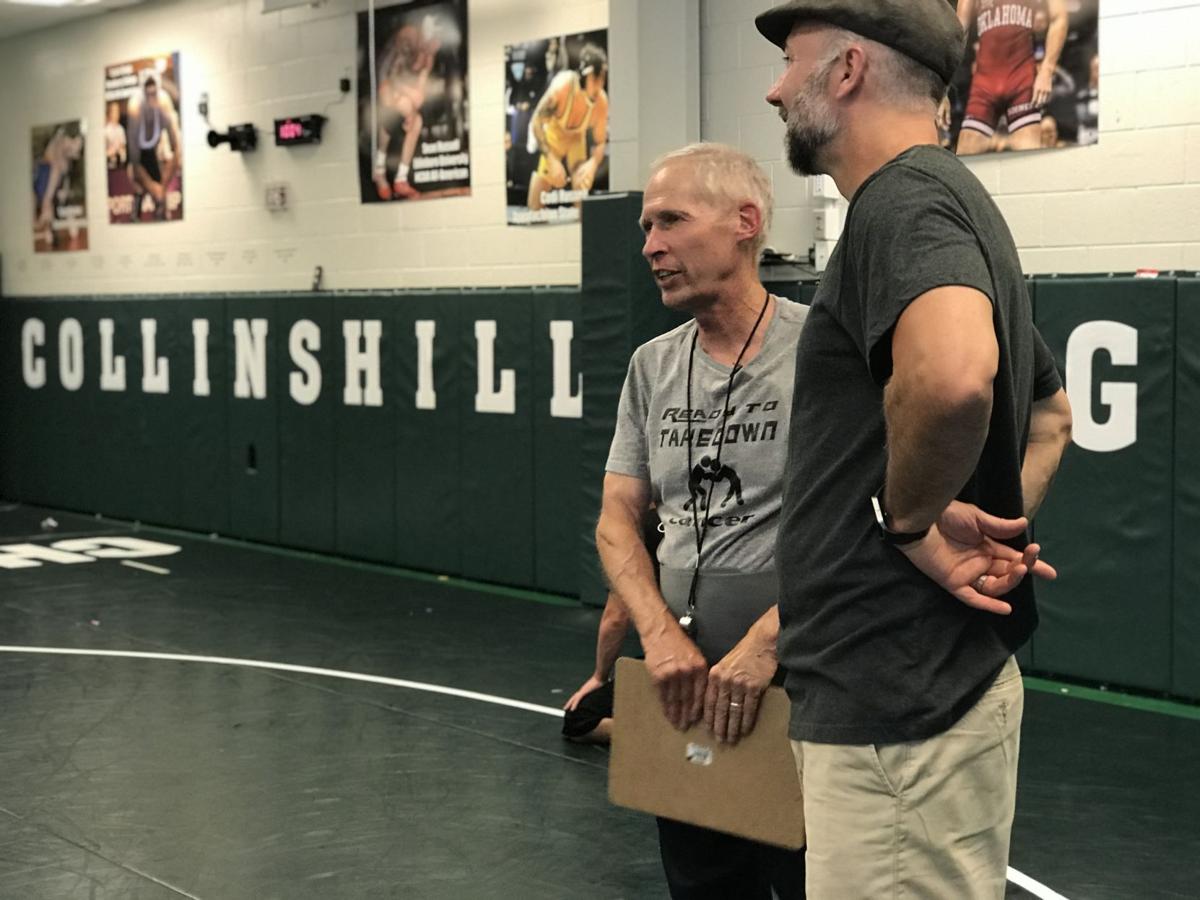 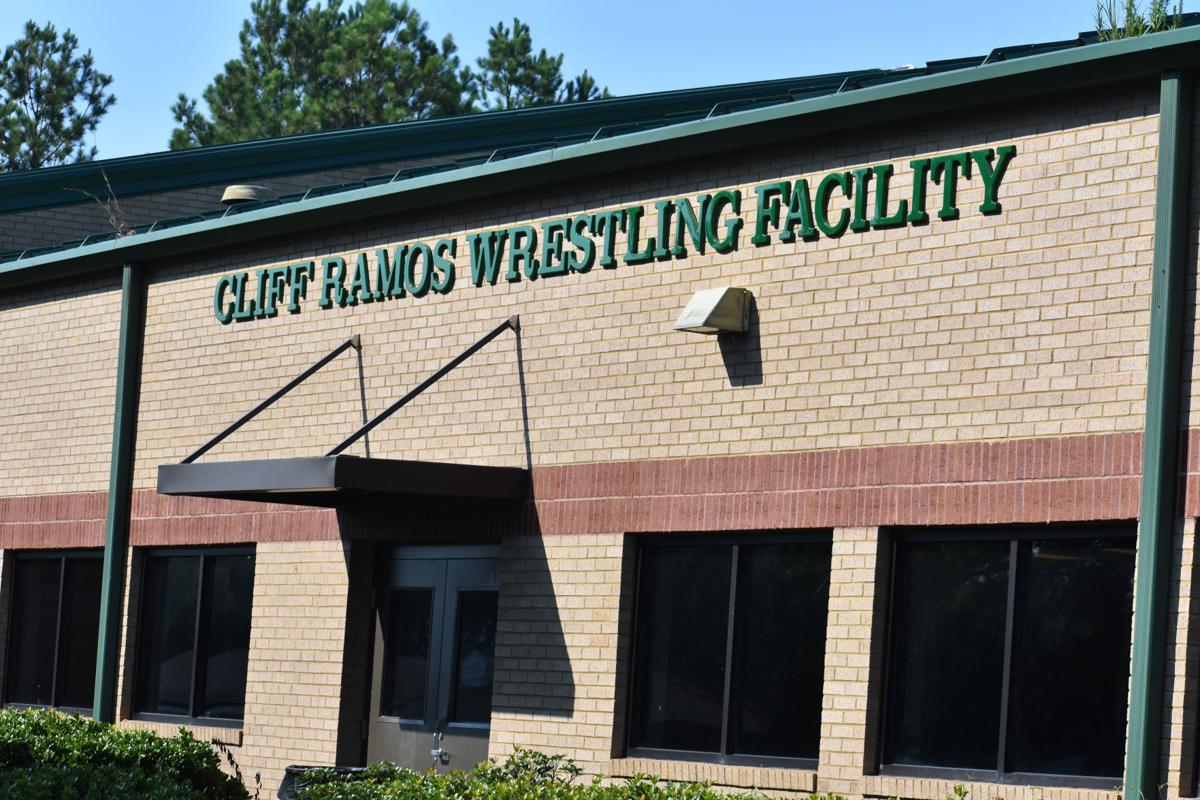 The exterior of the Cliff Ramos Wrestling Facility at Collins Hill. 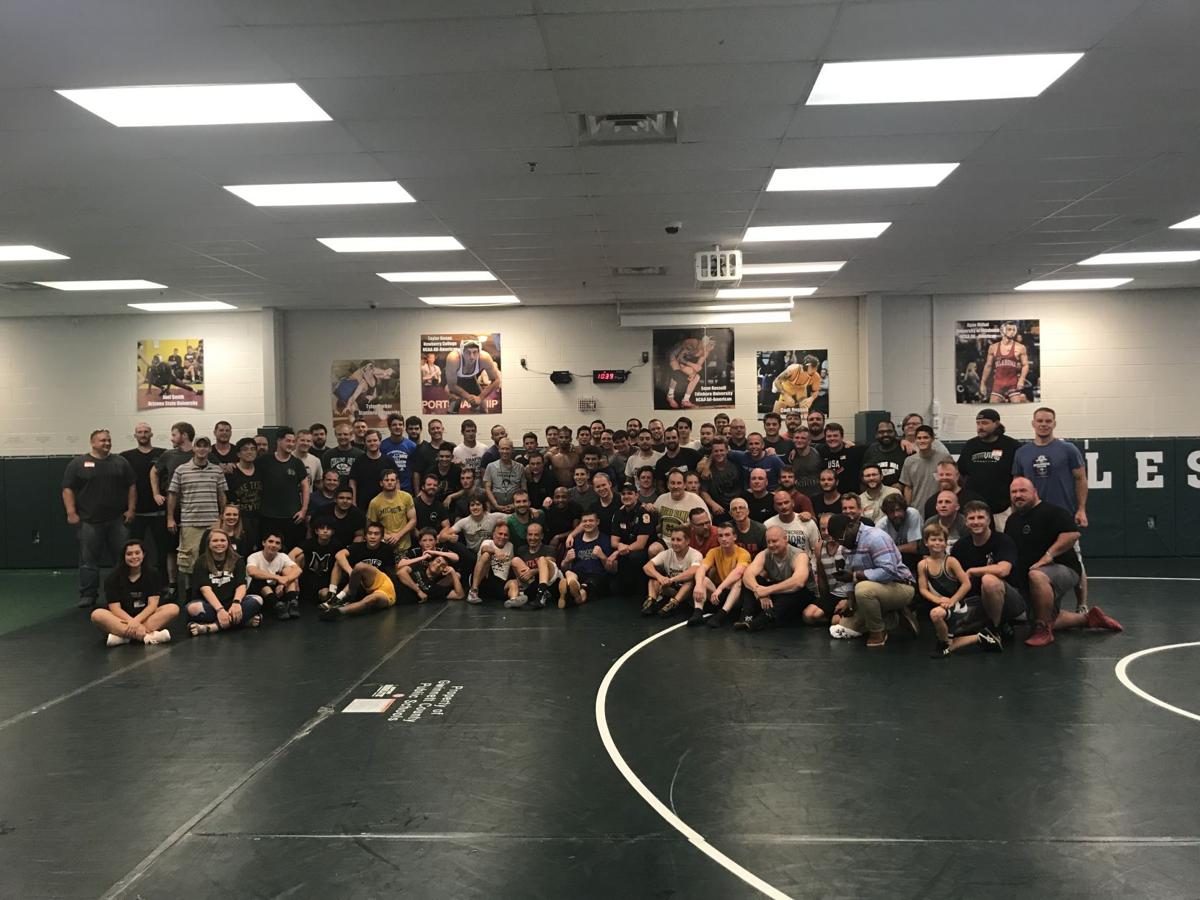 Wrestlers from each part of Cliff Ramos’ Hall of Fame coaching career came to Collins Hill in June 2019 for one more practice. 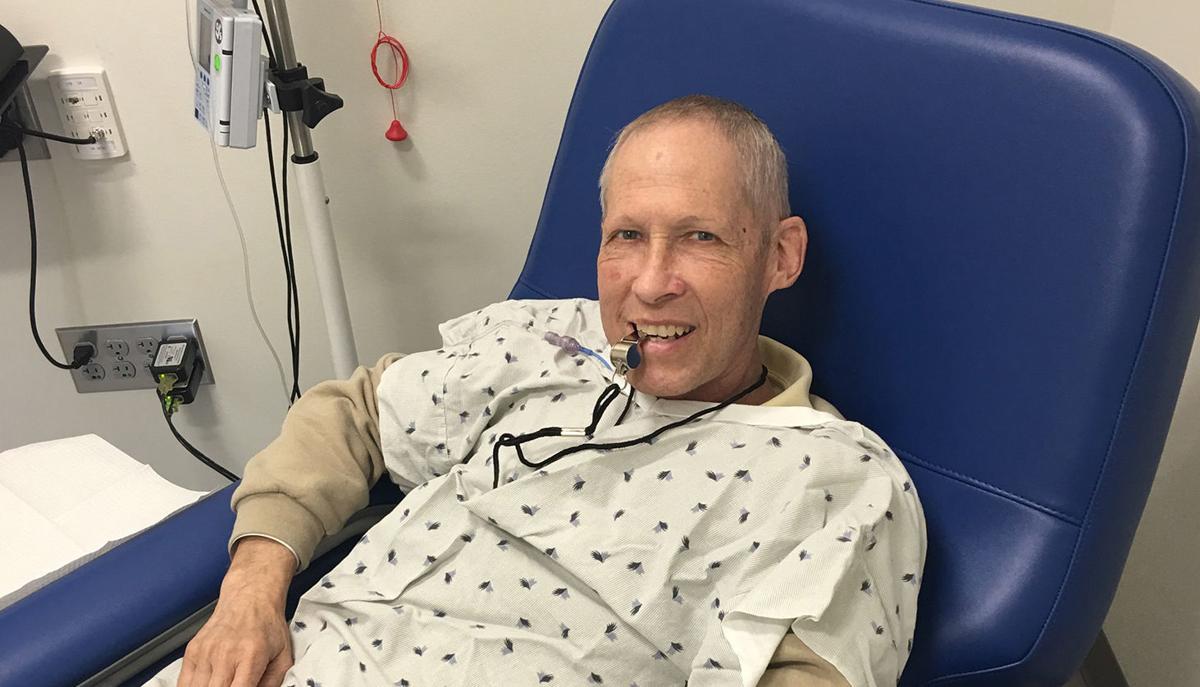 Cliff Ramos has survived pancreatic cancer for more than one year since being diagnosed. The former Collins Hill and Meadowcreek wrestling coach hosted a practice with former wrestlers and coaches Saturday at the Collins Hill fieldhouse. 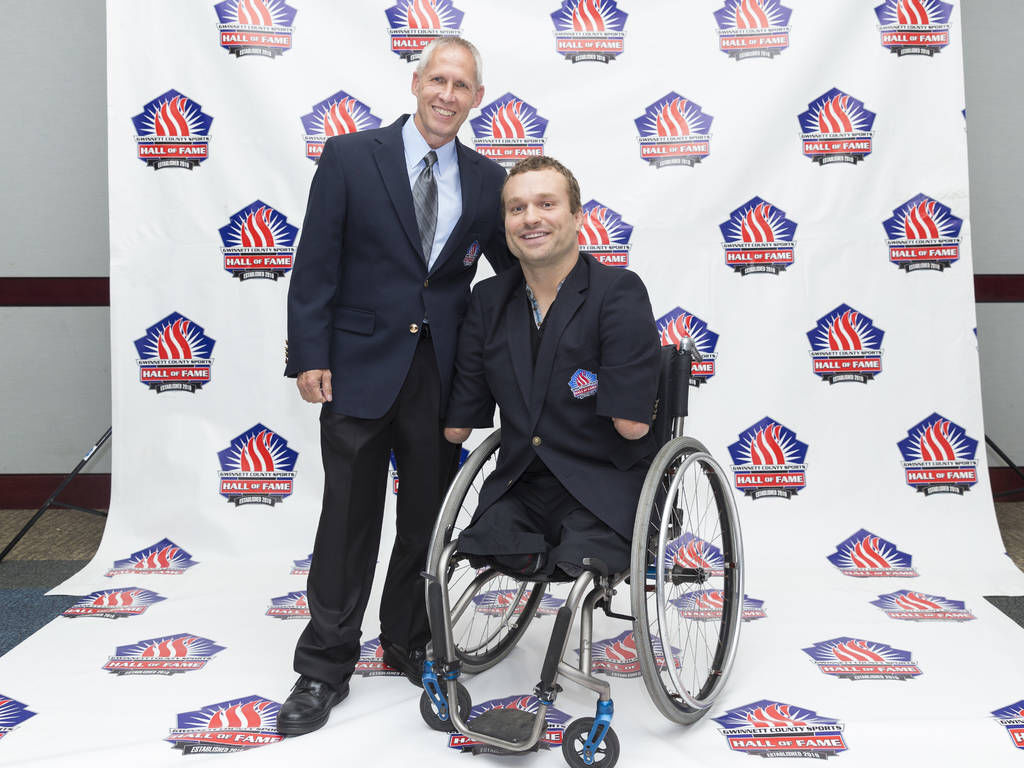 Kyle Maynard the 2017 Gwinnett Sports Hall of Fame Inductee pose for a photo with coach Cliff Ramos at The Infinite Energy Center in Duluth on Friday evening, May 19th, 2017. (Special Photo: Enka Lawson) 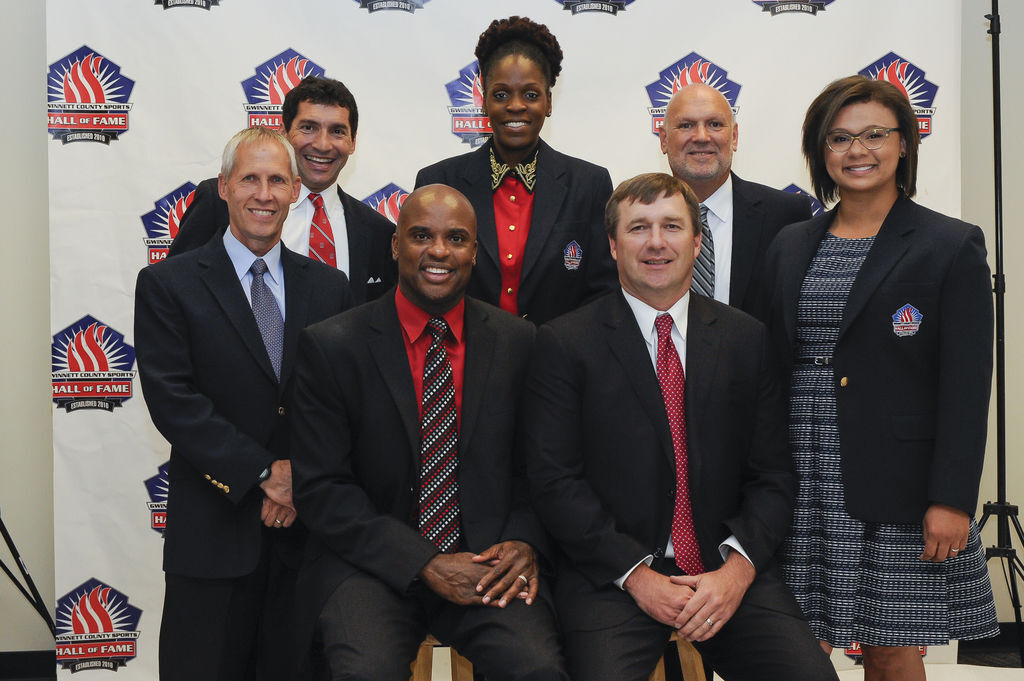 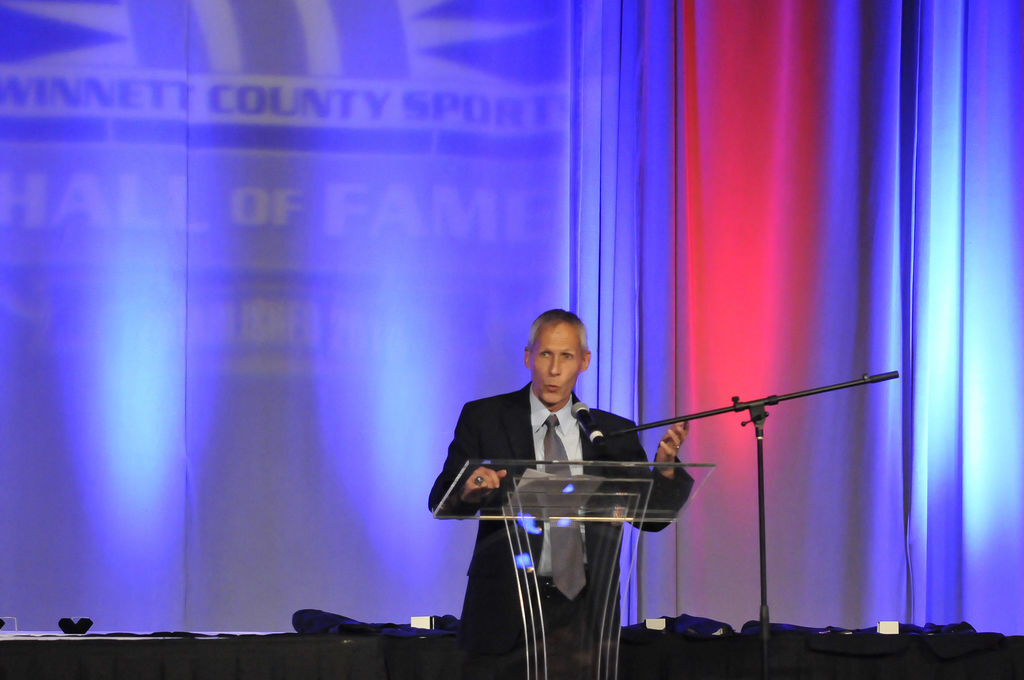 Retired Collins Hill, Meadowcreek and Greater Atlanta Christian School wrestling coach Cliff Ramos poses for a photo with his family during the reception of the 2016 Gwinnett Sports Hall of Fame at the Infinite Energy Center in Duluth.

The exterior of the Cliff Ramos Wrestling Facility at Collins Hill.

Wrestlers from each part of Cliff Ramos’ Hall of Fame coaching career came to Collins Hill in June 2019 for one more practice.

Cliff Ramos has survived pancreatic cancer for more than one year since being diagnosed. The former Collins Hill and Meadowcreek wrestling coach hosted a practice with former wrestlers and coaches Saturday at the Collins Hill fieldhouse.

Kyle Maynard the 2017 Gwinnett Sports Hall of Fame Inductee pose for a photo with coach Cliff Ramos at The Infinite Energy Center in Duluth on Friday evening, May 19th, 2017. (Special Photo: Enka Lawson)

To the end, Cliff Ramos fought hard against his pancreatic cancer.

The Gwinnett Sports Hall of Fame and National Wrestling Hall of Fame member spent the past six months in hospice, but refused to give in and stayed active until the past few weeks, when his condition worsened and he was sedated by his medical caregivers. Ramos passed away Thursday evening after battling cancer since his 2018 diagnosis. He was 67.

“Let me tell you about this nut,” said Jim Tiller, a close friend and longtime assistant of Ramos. “I’d go see him once a week. He would love for me to drive him to a park, a lot times we went to Harbins Park. We would go walk 20, 25 minutes. He was amazing. He’s on hospice and he’s out exercising. If you know Cliff, that’s not unusual.”

Tiller, the rest of Gwinnett’s wrestling community and beyond were in mourning Thursday as news traveled about Ramos’ death. His head coaching career included memorable stops at Meadowcreek and Collins Hill, along with later roles at Greater Atlanta Christian and Mountain View after he stepped away from head coaching.

Ramos had no shortage of friends he met through the sport, through the Gwinnett County Public Schools system where he worked for more than 30 years, through his church or through his frequent philanthropy for those in need.

“Everybody knows him as a great wrestling coach, I know what a great man he was,” said his longtime friend and fellow wrestling coach Steve West, fighting through tears. “I know how much he cared about his family and his wrestlers. He’d give the shirt off his back for his wrestlers and other people as well. All the work he did for the community when (the Ramos family) lived in Lawrenceville, donating his time and raising money for the (Lawrenceville) Co-Op. He did that because he loved people.”

West met Ramos in 1981 and two traveled the country by car during summers with the mission of doing good deeds and helping those in need. Ramos wrote a book about their adventures called “Backroads, No Plan, Good Deeds & Pee Wee” — Pee Wee was his nickname for West. Profits from the eBook went to the Lawrenceville Co-Op.

The care he showed to his community was matched by what he did for his wrestlers on and off the mat, those close to him said.

“I’ve been blessed to have Coach Cliff Ramos and his entire family in my life,” said Alex Paucar, a 1992 state champion wrestler for Ramos at Meadowcreek. “I only wrestled for him a short time, but most importantly he has been there for me, in my corner, ever since. Good times and bad, successful life events and setbacks.

“His support and advice did not have a time limit or expiration date, it always ran into overtime. And I’m forever grateful that he cared enough to coach and love me, and help mold me into the man I am today. When people say, ‘A coach of a lifetime,’ he completely embodies that statement. I’m one of his ‘idiots’ as he would affectionately call many of his wrestlers. God bless him and his entire family. We can’t thank the Ramos family enough for sharing him with us and so many others.”

Ramos also guided his teams and athletes to great heights, most notably at Collins Hill, and he sported a 626-80 record in dual meets. He led his Collins Hill teams to nine team state championships and had 34 individual state champions.

“Coach Ramos was as fine a coach as I ever had in any sport,” said current Mountain View coach Derek Tiller, one of Ramos’ state champions at Collins Hill. “But he was so much more to me than a coach. He was a second father to both myself and my brother Gary. So much of what I learned about how to become a man, husband, father and coach I attribute to Coach Ramos. I can’t thank him enough for the impact he had on my life.”

Not surprisingly, the Collins Hill wrestling facility is named in his honor.

“Coach Ramos was truly one of a kind,” said Mountain View head wrestling coach Jim Gassman, who wrestled for and coached with Ramos. “It would be difficult to find anyone with a servant heart for student-athletes and others such as Coach Ramos. Through my nearly 30 years of being either his wrestler and or coaching assistant with him, there are too many stories to share of how he stepped in to help someone that many would pass by. He helped shape so many students’ lives and people’s lives, his legacy will last for generations to come. We are very sad to lose such a fun-loving and caring person as Coach Ramos.”

While at Collins Hill, Ramos built a wrestling program that made its mark on the national level. In a six-year span, the Eagles were ranked nationally five times, a rarity at the time for a Georgia program.

“He set the standard,” Jim Tiller said of Ramos. “He set the standard for county wrestling, not just for the county, but for the state. He took our program to another level by taking us out all over the country to wrestle and truly be a national program. … We’ve been great friends. Our families have grown up together. The Ramoses consider us part of their family and we consider the Ramoses part of our family. He was a Godly man. He was truly concerned with the individual. He cared about kids.”

Throughout his coaching career, Ramos built close bonds in the coaching community and with his wrestlers. He stayed in contact from athletes throughout his more than 40 years in education and coaching, dating back to his first job in Butler, Missouri in 1976.

He first made his mark in Gwinnett at Meadowcreek before launching the Collins Hill program to greatness. His first coaching job in Georgia was at East Hall in the early 1980s.

“Coach Ramos, words cannot explain the impact coach has had on my life, and so many others’ lives,” said Mike Bowbliss, who wrestled for Ramos at Meadowcreek and later coached for him. “He was an amazing husband, father, coach, mentor and friend. I have been lucky to have thousands of moments with him and his family. That might be his greatest gift of all, when I think of his impact he had on my life, it was that he welcomed me as a 160 (pound) freshman and so many others like me into his life, like we were family.”

Ramos, despite his cancer, stayed active. Jim Tiller and Ramos often spent the winter weekends at high school wrestling tournaments. When his health allowed, he was in the stands chatting up his friends. When his immune system was struggling, he had a seat off to the side or atop the bleachers to take in the action. He even stopped by Collins Hill earlier this football season for the Corky Kell Classic game versus Carrollton.

When Ramos got sick in early March, doctors discovered his cancer had returned. He went directly into hospice care, Jim Tiller said, and Tiller visited weekly. West stopped by once or twice a week. As Ramos’ health declined, West visited five times in the past eight days, not knowing when the final goodbye would come.

“My wife said just a couple of minutes ago to be thankful for all the good memories you had,” West said Thursday night. “I know (Ramos’ wife) Kathy just asked me, ‘Don’t forget him.’ Which is impossible. … I saw him yesterday morning. He had been unresponsive the last couple of days. I just gave him a kiss on the forehead and told him I loved him. I’m just thankful he’s no longer in pain. That’s a long time with pancreatic cancer.”

Ramos is survived by his wife Kathy, children Taylor, Trevor and Kara and five grandchildren. Memorial service arrangements are pending.

GCPS Board of Education honored long time Collins Hill wrestling coach Cliff Ramos by approving a request to name the school’s field house activity room after him during Thursday’s school board meeting.

The Gwinnett County Sports Hall of Fame inducted its seventh class Friday night with a banquet at the Infinite Energy Forum.

Getting to Know … Cliff Ramos

Cliff Ramos, who started the wrestling programs at Meadowcreek and Collins Hill, is a National Wrestling Hall of Fame member and now an assistant to one of his former pupils, Jim Gassman, at Mountain View.