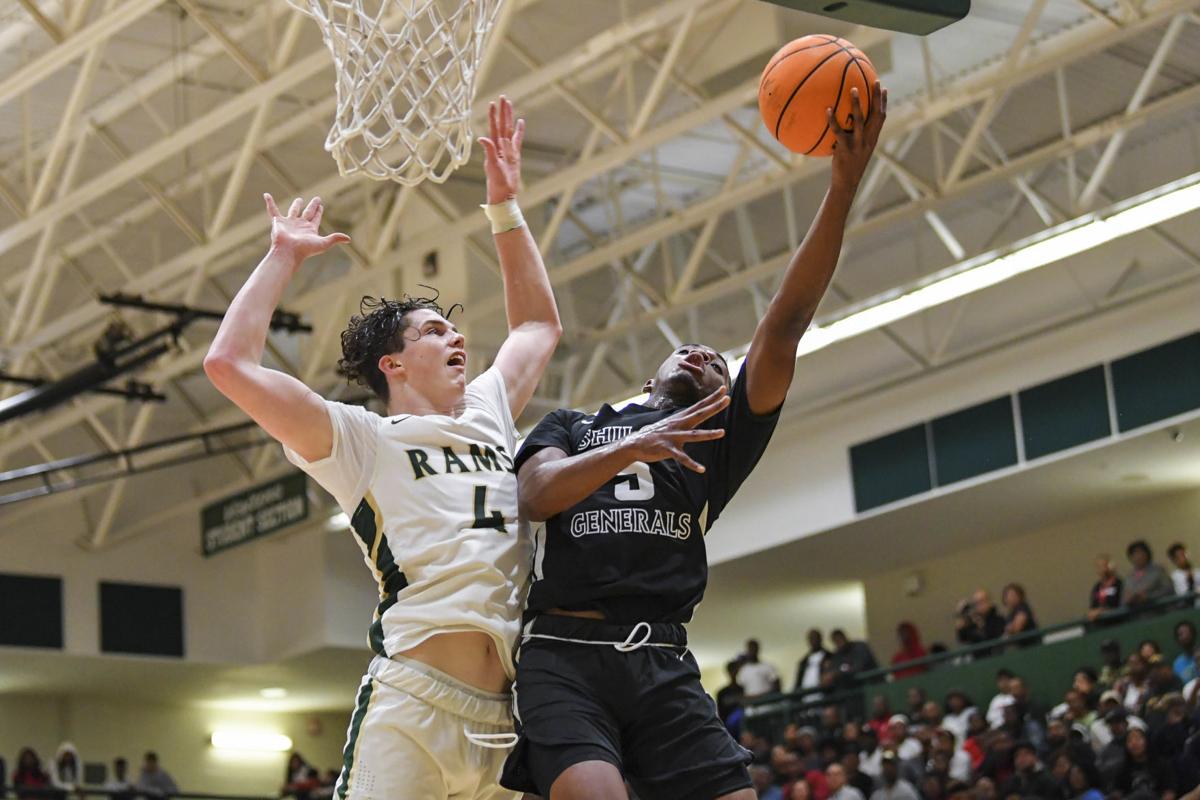 Grayson’s Ian Schieffelin (4) cuts off Shiloh’s James Little (5) during their game at Grayson earlier this month. Schieffelin, a 6-foot-7, 220-pound junior, has made major improvements in his fitness that have helped him take his game to a higher level in helping the Rams to state and national rankings so far this season. 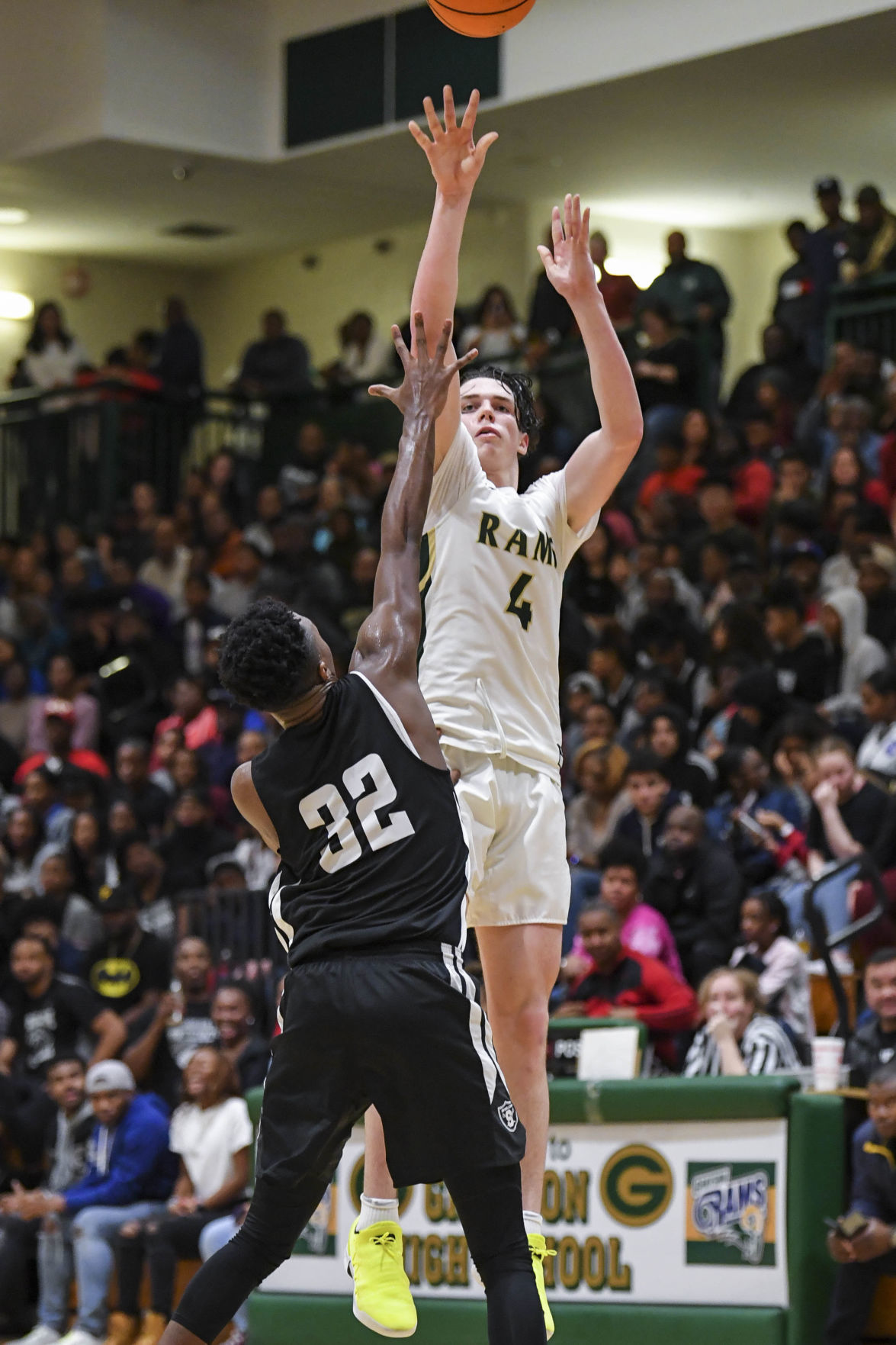 Grayson’s Ian Schieffelin has been credited with playing a key role in the Rams’ ascent in the state and national rankings. 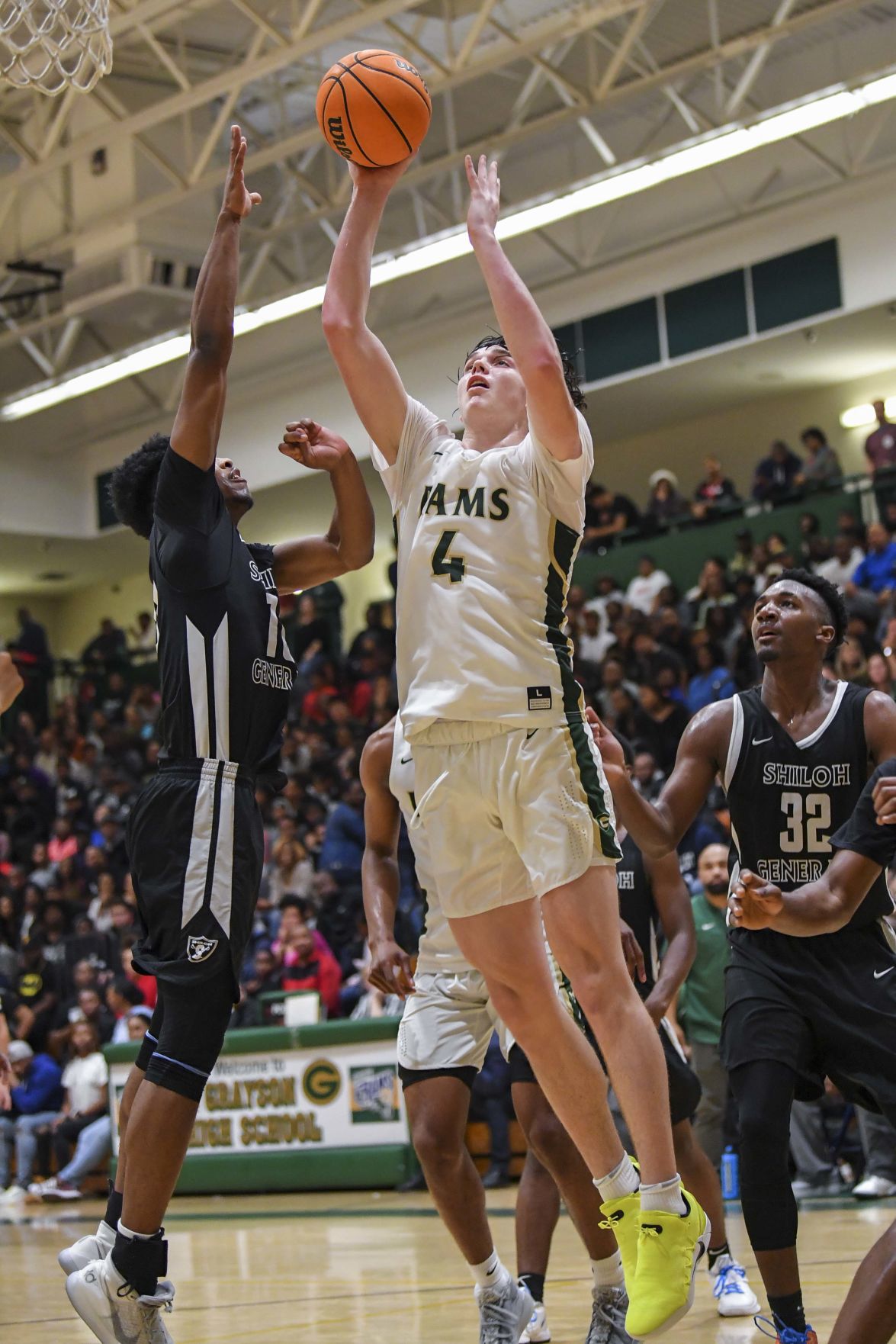 Grayson’s Ian Schieffelin (4) shoots the ball against Shiloh during a game at Grayson earlier this month. The 6-foot-7, 220-pound junior has used his commitment to better physical fitness and improving his game to take his game to a higher level, and help the Rams to state and national rankings, this season.

Grayson’s Ian Schieffelin (4) cuts off Shiloh’s James Little (5) during their game at Grayson earlier this month. Schieffelin, a 6-foot-7, 220-pound junior, has made major improvements in his fitness that have helped him take his game to a higher level in helping the Rams to state and national rankings so far this season.

Grayson’s Ian Schieffelin has been credited with playing a key role in the Rams’ ascent in the state and national rankings.

Grayson’s Ian Schieffelin (4) shoots the ball against Shiloh during a game at Grayson earlier this month. The 6-foot-7, 220-pound junior has used his commitment to better physical fitness and improving his game to take his game to a higher level, and help the Rams to state and national rankings, this season.

It’s quite common for a young athlete to ask for help from a coach, a parent or other confidant in identifying areas of his or her game in need of improvement, and then making the necessary adjustments.

It’s a little more rare for such a young athlete to be so aware as to identify such a problem area, and follow up with the determination to make their own adjustments.

Yet that is exactly what Ian Schieffelin has done during his junior season with Grayson’s boys basketball team over the last 10 months.

The 6-foot-7 forward had a solid sophomore season a year ago after averaging 10.1 points, 7.7 rebounds and 1.0 blocked shot per game in helping the Rams to a 25-4 record, including a Region 8-AAAAAAA championship and a berth in the second round of the Class AAAAAAA state tournament.

And his numbers through the first 18 games of this season may seem only nominally better — he is currently averaging 9.7 points, 9.7 rebounds, 1.6 assists and 2.6 blocks per game heading into Thursday’s late game against No. 6 state-ranked Archer.

However, Grayson coach Geoffrey Pierce and just about every player Schieffelin has played against this season can attest that he passes the eyeball test of taking his game to a newer, higher level in helping the Rams (17-1, 5-1) to a No. 1 state and No. 6 national ranking so far in 2019-20.

“He started out last year playing at a pretty high level as a first-year starter,” Pierce recalled about Schieffelin. “Then he kind of hit a wall in January. He had some stuff he was dealing with, I guess. That Norcross game, though, that really did a number on him. The very next day, he was going down to lift weights. Every day, he’d lift weights and work on his game. So you’re kind of seeing that hard work pay off for him.”

The Norcross game Pierce refers to was a 68-53 loss to the Blue Devils in last year’s state tournament that ended Grayson’s season.

It wasn’t just the loss that ended he and hist teammates’ dreams of a state title that bothered Schieffelin, it was the way it happened.

He admits the manner in which he felt generals overpowered by Norcross big men Daniel Ramsey, now playing Division I college ball at Xavier, and Issa Muhammad, now playing junior college ball, was a major wake-up call, and he was determined to answer that call.

“When I played (against Muhammad and Ramsey), I could really tell the strength of their game and I how I was going to (have to) develop because they’re two Division I (-caliber) big men,” Schieffelin said. “I was going to have to be stronger if I was going to play at the next level. … (Getting more physically fit) was a big purpose for me over the summer. As I was playing AAU (ball), I was getting better. I wanted to be able to play for longer spurts. Instead of playing, like, four minutes (at a time) and coming out (of the game), I’ve been able to play longer and be stronger inside than I used to be.

“I feel like my game’s always been good, but on the athletic side, I’ve always lacked (something). But now I’m more athletic, I’m able to explode more (to the basket), make moves faster, play quicker and it’s really helped me game develop to the way it is now.”

Schieffelin’s commitment to better physical fitness has actually been a work in progress since he topped out at 240 pounds during his freshman season.

But after dropping five pounds last year, he shed 15 more last spring and summer to come into his junior season at a noticeably more svelte 220 pounds.

But in addition to getting leaner, Schieffelin is also working to get a little meaner. That is to say Pierce wants him to be a little more aggressive and assertive on the offensive side of the court, even with such big-time scoring teammates like five-star Mississippi State signee Deivon Smith, South Florida signee Caleb Murphy and Winthrop signee Toneari Lane.

Schieffelin has definitely taken steps in the right direction on, and while it is still a work in progress, his history indicates he will attack the issues with the same zeal and effort he did with his fitness issues.

“I think that’s a testament to the type of kid he is,” Pierce said. “All the great ones, they identify weaknesses, … an they attack them in the offseason. All of them do it. I can speak for all the good players we’ve had who have come through here. Deivon did it. Alphonso (Willis) did it. Nick (Anderson) was the same way. He got stronger heading into his senior year and his game really took off.

“Like I said (Schieffelin has) got a lot of room for improvement. He’s got a lot of greatness he doesn’t even realize he has yet, to be honest for you. … He’s a really good kid on and off the court, very unselfish. You can see how much his teammates respect his game when you’ve got Deivon, Caleb and Toneari, they’ll yell at him when he passes up his shot. They expect him to take and make those shots. He’s developed into a more complete player. He was more pick and pop last year, but now he’s somebody we can … throw it down form the block and get a bucket (from) as well.”

Those additions to his game has helped Schieffelin to some breakout performances on some of the biggest stages Grayson has played in so far this year.

He went for a triple-double of 13 points, 10 rebounds and 11 blocked shots in the Rams’ demolition of defending state champion McEachern in the Hawks-Naismith Holiday Classic in December, and was equally dominant in wins over No. 2 Shiloh (20 points, nine rebounds) and Class AAAAA No. 1 Lithonia (21 points, 12 rebounds).

It has definitely raised Schieffelin’s recruiting profile, with recent interest from high-profile programs like Clemson and Butler adding to offers from Winthrop and James Madison.

And Schieffelin says he intends to put in all the work necessary to not only raise that profile further, but also try to help the Rams to their ultimate goal.

“I’ve always been a big game player, with it’s football or basketball or baseball,” Schieffelin said. “So I feel like I’ve been ready for these moments in all these big-time games that we’re playing in.

“I’m always in the gym and getting stronger and faster because there’s always more that you can do. But over the summer, I’m going to focus on my ball handling and my ability to dribble the ball.”