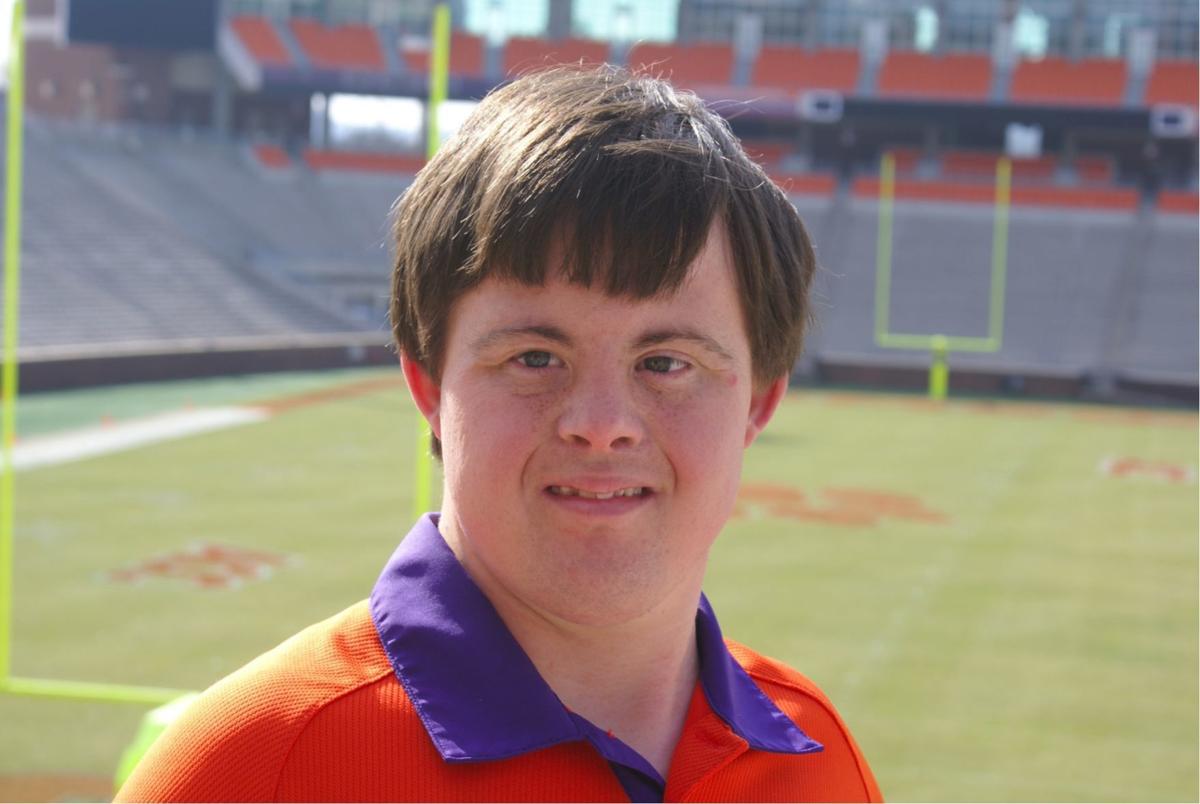 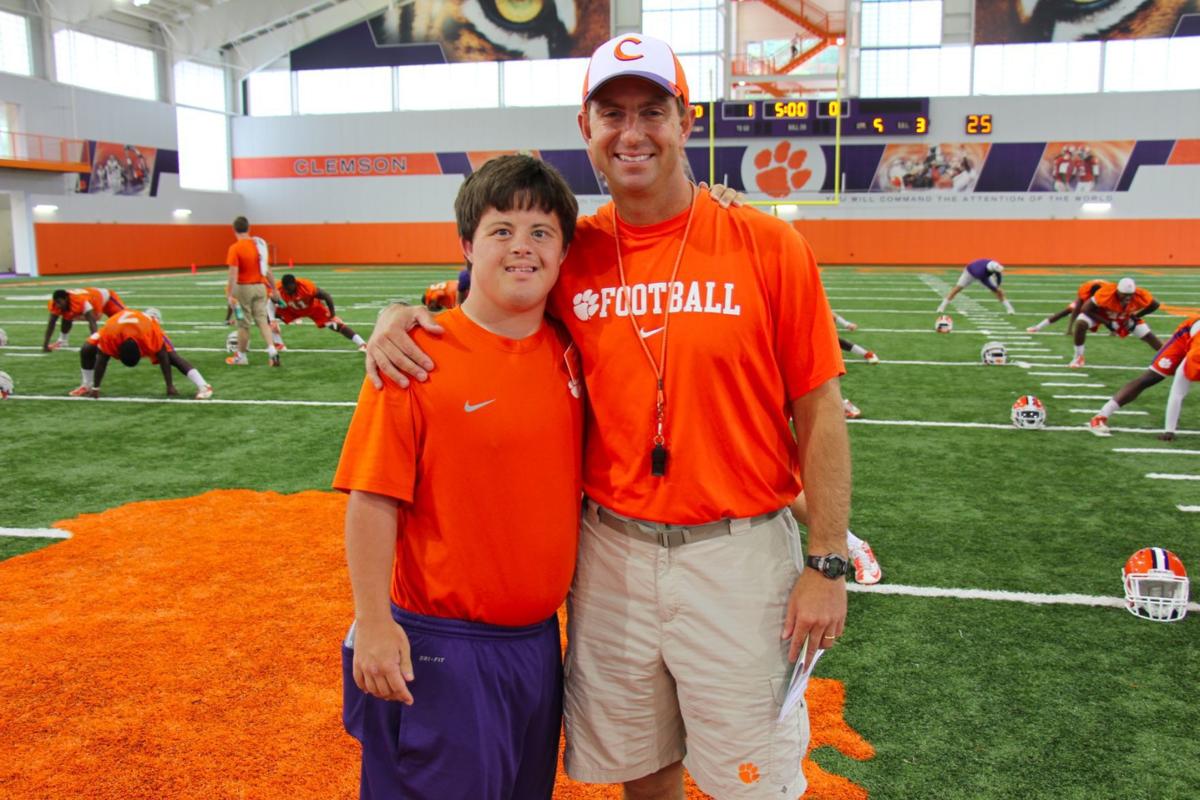 David Saville’s story is one that has gathered national attention for years.

Born with Down syndrome, the Norcross native has become a familiar figure to college football fans for his involvement with Clemson’s national-championship program as equipment manager and as a graduate of the ClemsonLIFE, a program that prepares students with intellectual disabilities for employment and independent living.

His positive outlook and energy also earned him the Walter Camp Football Foundation’s American Hero Award earlier this year, not long after completing his eighth season with the Tigers.

But as well known as Saville has become nationwide, he has never forgotten where he came from, and never will.

It is for that reason that his inclusion with the 2019 induction class of the Gwinnett County Sports Hall of Fame means perhaps more to him than any other accolades or recognition he has received.

“You know, he’s been named to so many different things, but the Gwinnett (Sports) Hall of Fame was probably the most exciting event because he’s being recognized by people where he’s from — his home,” said David’s father, Bob Saville. “Most of his other awards have been (ones like) the Walter Camp American Hero Award, which was all the way up in Hartford (Conn.). Even though it’s a big national award, the local award … means more to him than anything.”

Home has always meant a lot to Saville all the way back to his days at Norcross getting started as a football equipment manager for Norcross High School’s state championship teammate and establishing himself in his new home in Clemson.

In fact, outside of his actual family, there are few people more important to Saville and his achievements than the Norcross High School community and the Gwinnett County community.

In particular, several figures within the Blue Devils’ athletic programs have been among Saville’s biggest supporters and friends, including one who will share the stage with him at Wednesday’s induction ceremony.

“(Retired Norcross and Collins Hill girls basketball coach) Angie Hembree is like his best friend,” Bob Saville said. “There’s a picture of him holding two of Angie’s state championship trophies. They are just joined at the hip, sort of like he and (Norcross football) Coach (Keith) Maloof is.

“So he’s going to be sitting there with Coach Maloof and (assistant coach) Corey Richardson. … Corey was the one who really taught David how to be an equipment manager and made him successful. So he’s going to be there and (Norcross defensive coordinator) Pat Standard is his cheerleader. It’s also interesting to note his Special (Education) teacher at Norcross, Tiffany Rojas, is going to be there. And then his speech teacher (Cathy Statham), who still works with him on his speeches, is still at Norcross.”

And the love and admiration Saville has shown his home community is very mutual.

That even goes for for his more recent acquaintances from the extended Gwinnett and Clemson communities, including another fellow 2019 inductee in former Grayson coach and current Clemson assistant Mickey Conn, who had met Saville before, but became close friends with him after joining the Tigers’ staff three years ago.

“I am so proud of David,” Conn said. “David has so much love in his heart, and I admire him for that. David’s attitude never changes. He is happy and positive.”

Of course, Clemson has become a second home for Saville, one where he is forging is own identity even beyond his involvement with the Tigers football program.

And he is known for his friendliness there just as much as he was back in his native home in Norcross.

“He loves Clemson,” Bob Saville said. “The good thing about Clemson is that he’s totally independent up there. He doesn’t have anybody that watches over him. He will call me when he runs into a problem. That’s pretty incredible. Clemson’s sort of a naturally small environment where everybody there knows who he is. He can get on the Cat Bus and the driver knows who he is.

But as much as he has made a new home for himself in Clemson, Norcross and Gwinnett County will always be a place he will never forget, and vice versa.

“(Norcross player and coaches always) looked at him as he’s a friend of ours,” Maloof said about Saville in an interview three years ago. “He impacted not only a football program, but a whole community. People gravitated to him.

Saville's ties to his community will be celebrated at his Gwinnett County Sports Hall of Fame induction.

"David Saville brought perspective and love and integrity and honor and selflessness to almost a half a generation of folks, his peers and adults that live in Peachtree Corners and Norcross and yes to the four corners of our great country and beyond," Aaron Lupuloff, senior executive director of the Gwinnett County Public Schools Foundation, said in a message. "The only thing 'special' about David is his desire to work hard and accomplish goals and yes, help others. To the Lupuloff clan, David is a great friend and an astonishing person and just a fun person to hang out with. Yes, he truly belongs in the exclusive club, the Gwinnett Sports Hall of Fame."