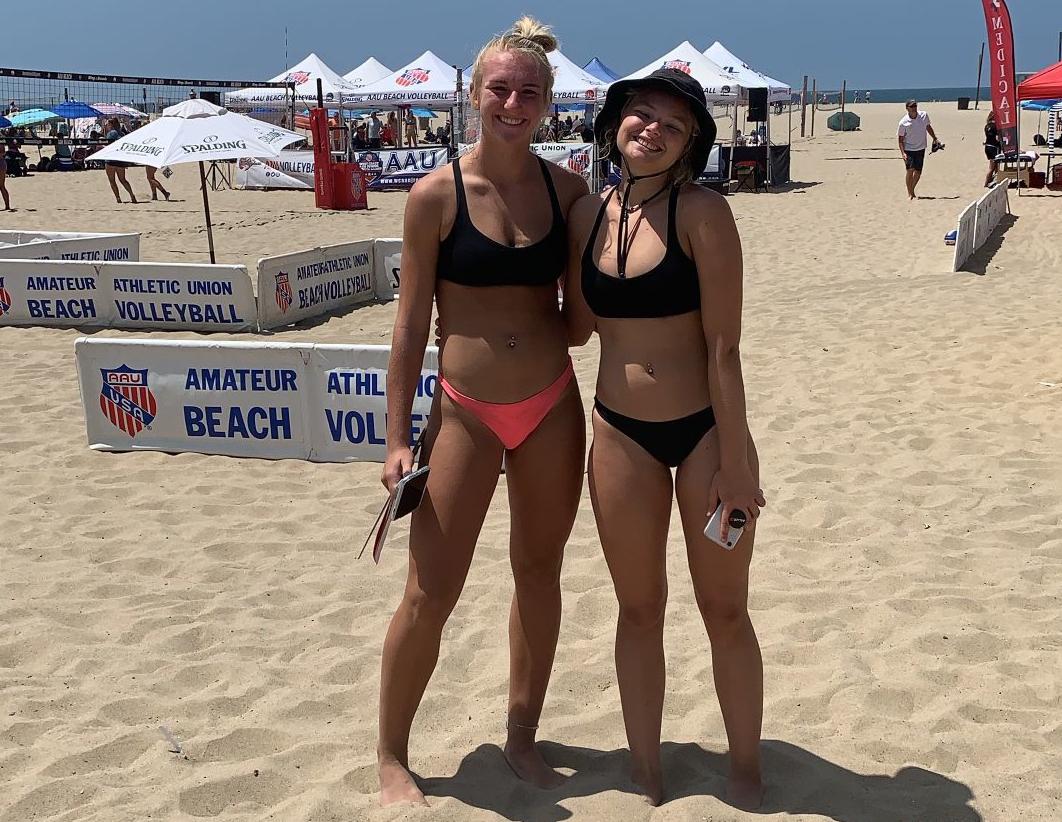 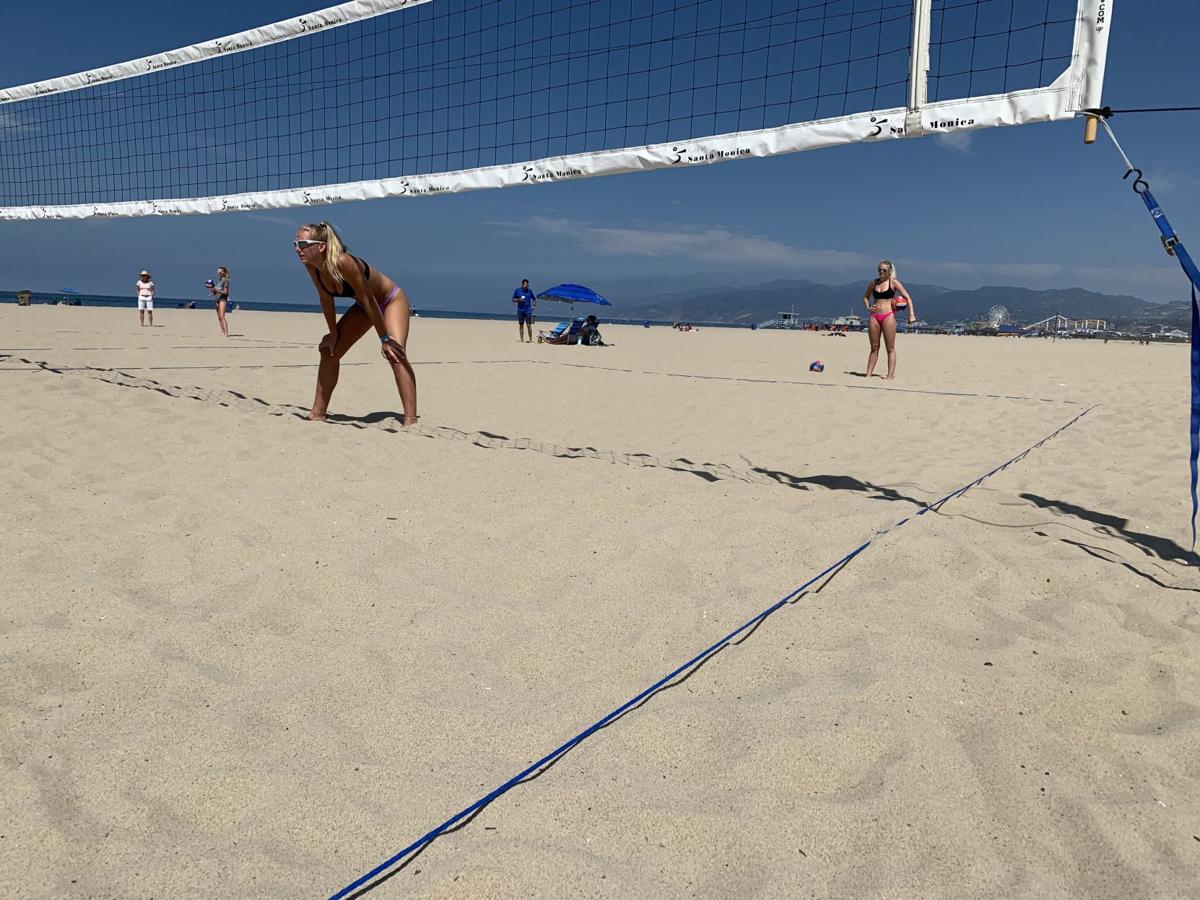 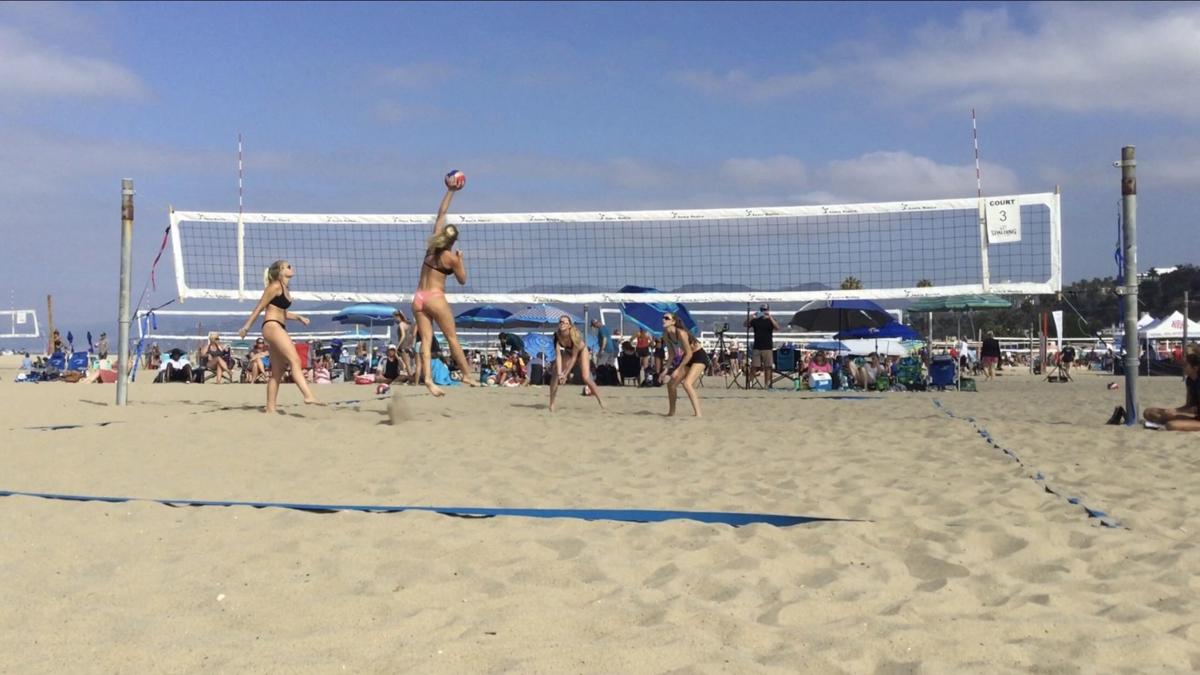 North Gwinnett junior Izzy Durnell hits during the AAU Olympic Games in Santa Monica, Calif. She and Buford junior Parker Venable qualified for the tournament in just their second year of playing beach volleyball together and finished ninth in their division in July. (Special Photo) 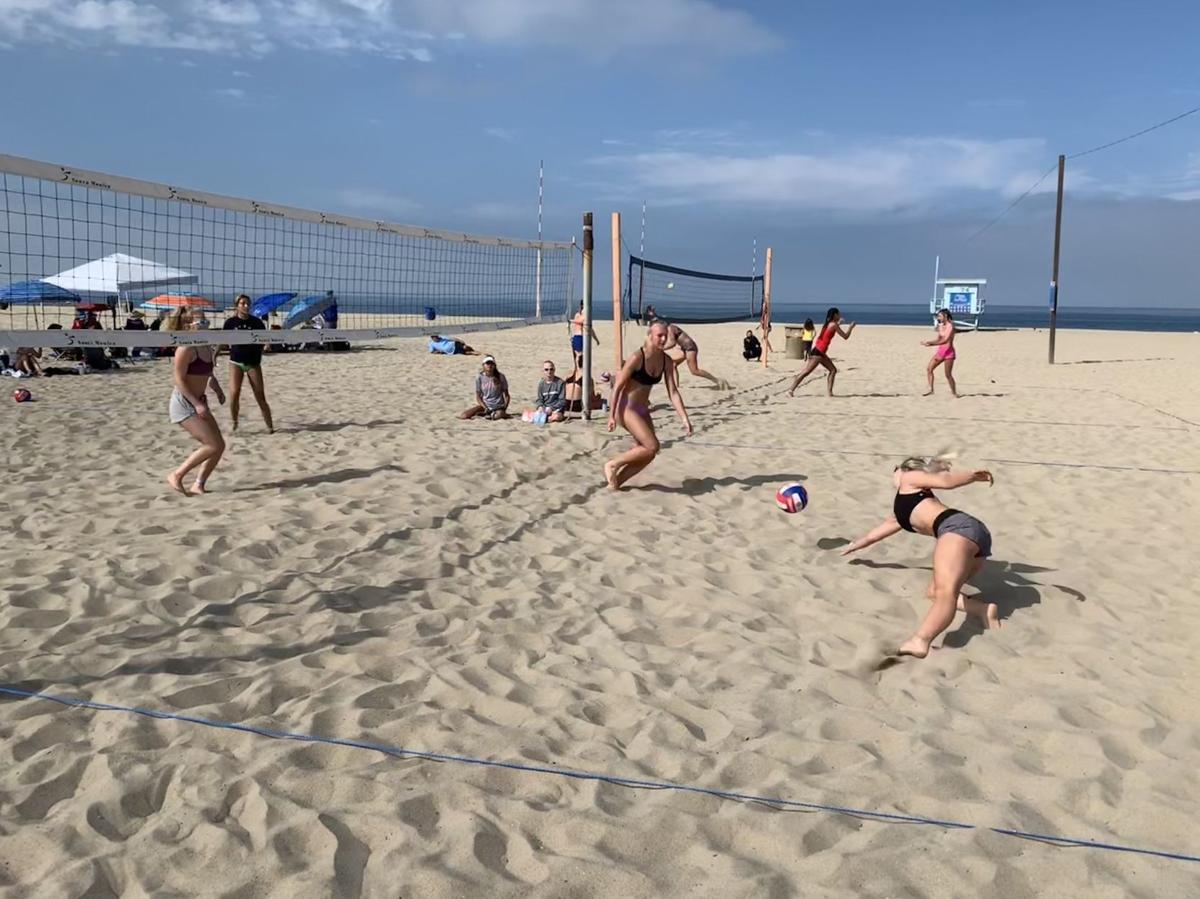 Buford junior Parker Venable dives for a ball during the AAU Olympic Games in Santa Monica, Calif. She and North Gwinnett junior Izzy Durnell qualified for the tournament in just their second year of playing beach volleyball together and finished ninth in their division in July. (Special Photo)

North Gwinnett junior Izzy Durnell hits during the AAU Olympic Games in Santa Monica, Calif. She and Buford junior Parker Venable qualified for the tournament in just their second year of playing beach volleyball together and finished ninth in their division in July. (Special Photo)

Buford junior Parker Venable dives for a ball during the AAU Olympic Games in Santa Monica, Calif. She and North Gwinnett junior Izzy Durnell qualified for the tournament in just their second year of playing beach volleyball together and finished ninth in their division in July. (Special Photo)

She saw Izzy Durnell at their club volleyball practices and thought they'd work well together.

They were freshmen, relatively new to the Atlanta Extreme Volleyball Club and neither had experience playing the two-person beach version.

“She had some skill sets I didn't have,” Venable said. “She was tall and she was a better blocker than me. I just knew if she went up to block that I would be able to defense. We matched well.”

Durnell, from North Gwinnett, had a partner at the time.

“We got along but it wasn't the correct match,” Durnell said. “Parker asked if I would be open to playing with someone else.

“We played one beach tournament here and we won.”

That was two years ago. This July, Venable and Durnell had to pick between three different national events because they had qualified for all of them.

“I wanted to be competing for these tournaments by the time we finished this season, but I did not expect us to go earn bids like we did,” their club coach Bobby Mitchell said. “That's the best kind of surprise there.

"They're definitely ahead of schedule, but we still have lots to do.”

“We played in a (USA Volleyball) bid tournament at the beginning of the year and we didn't really know it was a bid tournament until we got there,” Durnell said, a little self-depreciating humor lifting the corners of her mouth. “We got third and won a bid.”

The next weekend, they won the qualifying tournament for AAUs.

“It definitely took us both by surprise,” Venable said of their rapid rise in the beach ranks. “I didn't expect to be where I am today, but I just think me and Izzy have put in the extra hours and the time to be at the level we're at.”

There was one more the following weekend and they, due to conflicting dates, had to pick one. They went to the AAU Junior Olympics in Santa Monica, Calif., and finished ninth in their division.

“Our first day we had six games, it was a lot,” Venable said. “We played for eight hours. The competition is a lot different on the West Coast than it is in Georgia. They're just constantly out there playing on the real beaches and with the wind and the elements. So it took time to adjust, but we definitely got the hang of it pretty quick.

“The second day, our matches didn't go quite as we wanted them to, but me and Izzy we still performed as best as we could.”

They came back with a deeper understanding of their game, with its strengths and weaknesses.

“We didn't plan on going to nationals at the beginning of the season,” Mitchell said. “They had some success last season, but generally most of the teams we faced have been playing beach for a long time.

“I told them two years ago, hey, we're not going to be winning these tournaments right away. It's going to take time. If we're not doing well in another two seasons, then we have a problem. They understood that. They were patient with it.”

Mitchell took over as the Atlanta Extreme beach program's director about the same time Venable and Durnell walked through the doors 2 ½ years ago. Both players tested well on measurables such as speed and vertical jump during tryouts.

“It was brand new so, for the most part, I tried to let girls pick their own partners then we would make suggestions,” Mitchell said. “Those two found each other and I saw how that dynamic was working.

“But beach is a very different game from indoor.”

Venable had more indoor experience. Durnell is not shy about her feelings for the indoor game after a season on JV as a freshman at North.

“I wanted nothing to do with volleyball,” said Durnell, who played basketball, rides horses and swims.

Her mom, Beth, convinced her to give the club team a shot.

“I didn't want to, but she drove me here and I ended up liking it,” Durnell said with a smile.

Her athleticism, and height, overshadowed inexperience.

“She picked up on it very quickly,” Mitchell said. “So it was just pushing them and trying to get them to play as much as possible. We put them in position to be successful at practice, but in reality, the best way to get better is playing the game. That's where you learn all the angles of defense and offense and talking.

“It wasn't perfect right away. They would get down on themselves in games and get frustrated.”

Neither is inclined to be really vocal on the court, which is crucial in the beach game.

“They had all the tools they needed,” Mitchell said. “They had to refine some skills, but really it was just communicating better, being more open with each other and then understanding that they had each other's backs.

“It's a doubles sport. It's a lot more mentally demanding at times than the indoor game. In indoor, if you're struggling on serve/receive, you shank a couple of balls, you hit a couple of balls out, you just get a sub. In beach, nobody's there.”

Even as a coach, Mitchell isn't allowed to talk during play.

“It's probably what I struggle with the most — I don't know if I like talking while I'm playing,” Durnell said with a laugh. “But if you don't talk, you struggle. We learned that a few times during play. If we both shut down, it doesn't go well.

“It's still like I'm forcing myself though. It's a work in progress.”

At the end of their first season of beach volleyball, the duo was making gold brackets instead of silver.

“We'd win one round there, maybe two,” Mitchell said. “Then this season, we were gold bracket every single tournament and kept pushing. We made it to some finals, some semis.”

They are still refining their skills and understanding of a complicated game that is mentally and physically taxing, but the ceiling is high.