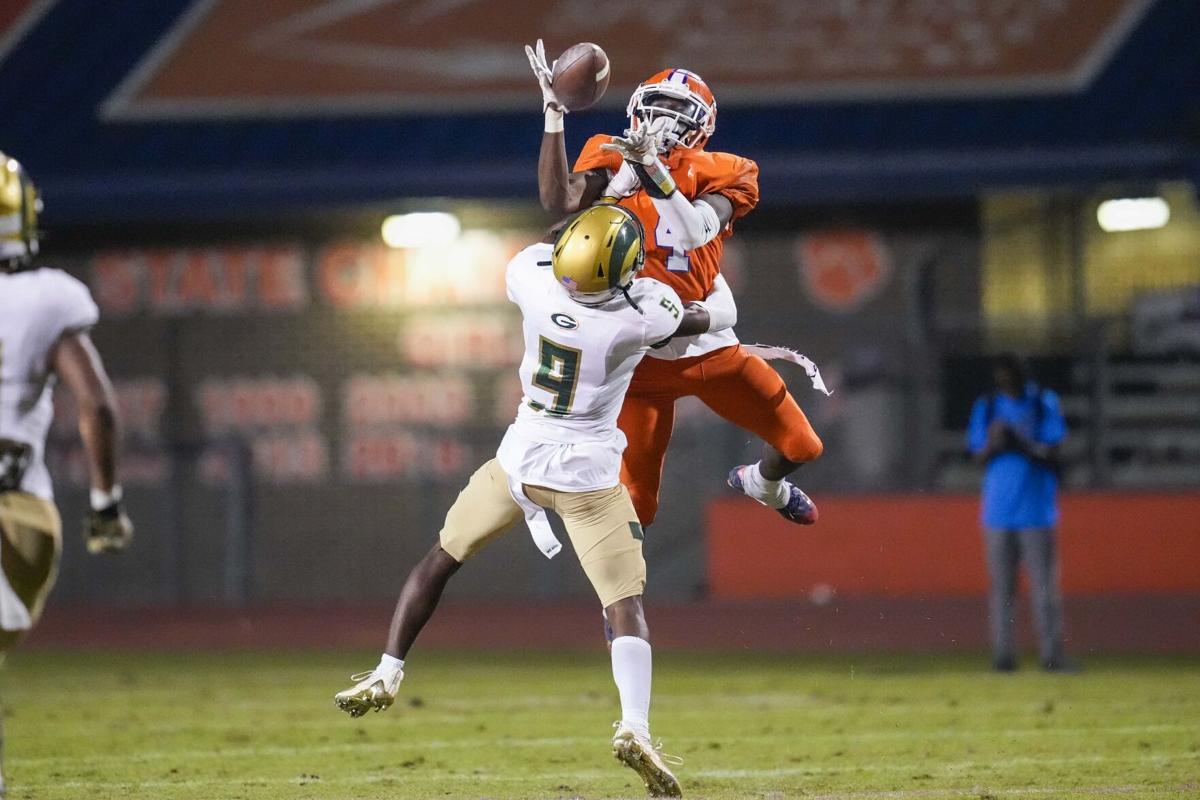 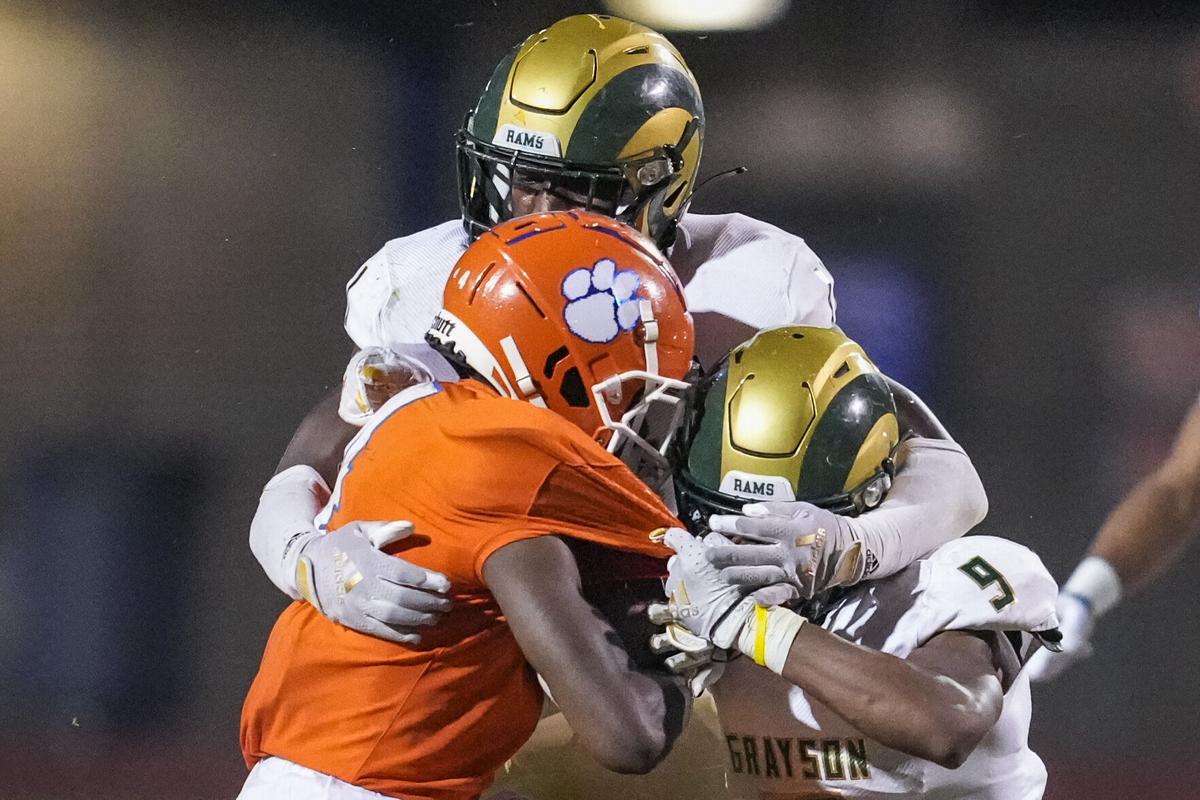 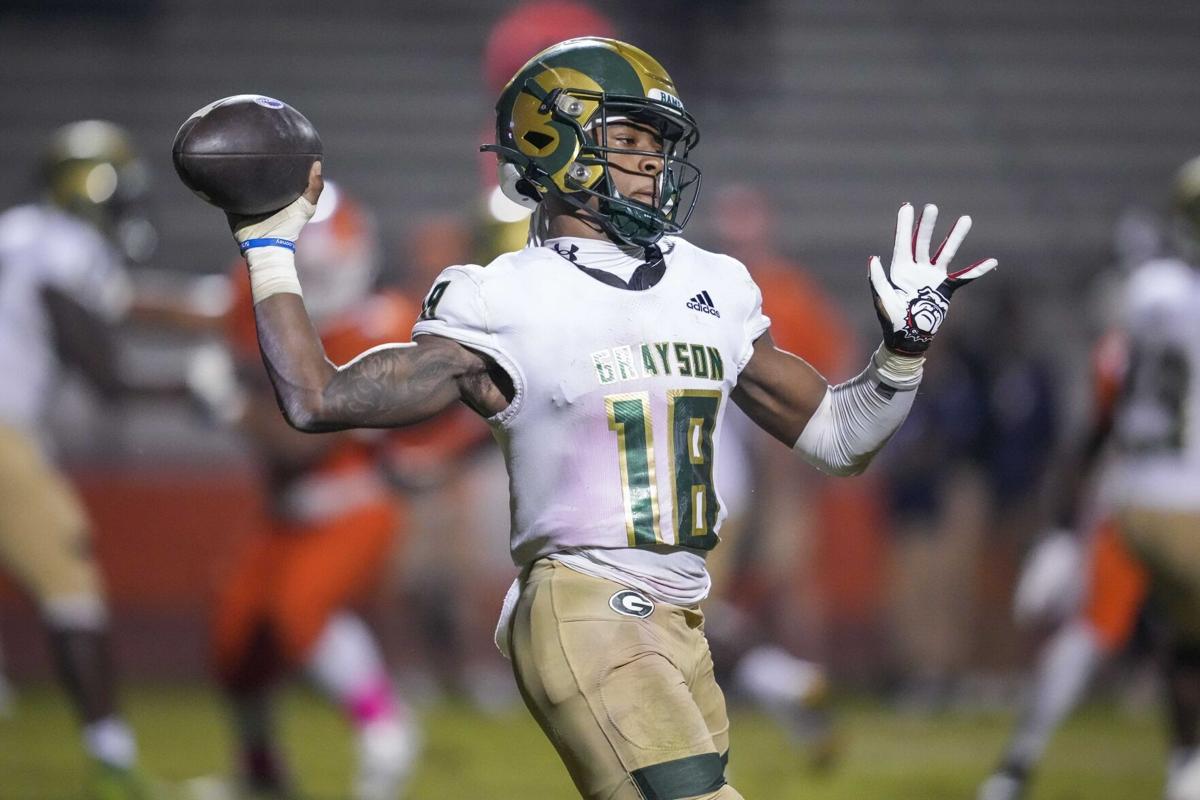 LILBURN — With a dramatic final drive consisting of two long fourth-down conversions, Parkview’s football team was on the brink of a tying score in the final minutes against Grayson on Friday. In the end, though, the defending Class AAAAAAA champion Rams were able to hold on, escaping with a 28-21 win at Karl Bostick Field.

“We challenged them all week,” Grayson coach Adam Carter said. “They knew they were going to be playing a football team that was going to come out here and fight them for four quarters. They were going to have to compete.”

Parkview receiver Mike Matthews was the spark that helped the Panthers get within striking distance late. Down one score with 3:48 left in the third, Matthews ran towards the sideline and made a spectacular one-handed grab that put his team at the Rams’ 11.

Less than two minutes later, Parkview quarterback Colin Houck completed a shovel pass to Khyair Spain for the touchdown. Houck was then able to connect with Zion Taylor in the back of the end zone for the two-point conversion, tying the game at 21-21 with 1:07 left in the third.

The fourth quarter was mostly quiet on the scoreboard, but with time winding down, Grayson relied on the legs of its two runners, Joe Taylor and Dylan Elder, while running the clock down. With 2:36 to play, Taylor dove over the goal line from four yards out to put Grayson back in front.

“We’ve got two good running backs,” Carter said. “Up front, I’m hard on those front guys. We expect a lot out of them and respond and let those guys have an opportunity to find some hole and run the ball. We’re going to win and lose the game on Friday night on what we do up front.”

Parkview converted on fourth and long twice on its final drive, and almost converted a third time. Matthews was Houck’s favorite target, helping drive the Panthers to the Rams’ 35. Matthews could not make the grab on his third fourth down target, tough, with Grayson defenders able to knock the ball out of Matthews’ hands.

“We needed that,” Carter said. “We’ve been able to minimize the run game pretty good all season but when people wanted to drop back and throw it on us a bunch, we’ve struggled with that. You see some passes right there but we make the play at the end of the game.”

Grayson’s first drive initially looked like it would lead to a score, with Taylor and quarterback JoJo Stone making plays with their legs to get the Rams deep into Panther territory. However, Parkview’s defense tightened up and forced a stop, leading to a missed 43-yard field goal attempt that was well short.

Both teams traded possessions throughout the rest of the opening quarter, but with 36 seconds left in the period, the Rams finally broke through after a drive powered by Elder. Taylor found the right edge and then the corner of the end zone from four yards out, leading to a 7-0 Grayson lead.

Parkview’s offense couldn’t get points early, but defense and special teams plays kept the Panthers in the game. With 10:38 left in the second quarter, an interception and return down the sideline 43 yards for the score tied the game at 7-7.

After Grayson retook the lead with a 8-yard run up the middle from Elder, an 86-yard kickoff return from Jordan McCoy immediately set the Panthers up at the Rams’ 2. Parkview immediately took advantage, walking in for a touchdown on the next play, but Grayson kept the lead at 14-13 after the snap on the extra point was mishandled. While those plays kept the Panthers in the game, the offense wasn’t really able to get into a rhythm until the second half as a result.

“Offensively, it’s hard to get any kind of momentum going when we can’t get back on the field,” Godfree said. “We created plays and we created turnovers that kept the offense off the field. In the second half, we started well, cleaned some things up and finished better.”

With the clock winding down to the half, the Rams looked like they would take that slim lead into the locker room. But after receiving the ball with just 1:22 left to play, Stone executed a hurry-up attack to perfection, finding a wide open John Cineas behind the DB for a 23-yard strike and a 21-13 lead heading into tension-filled second half.

“We love the way our kids play,” Godfree said. “We play hard, we fight the entire game. Effort is never an issue and that’s what makes you more proud than anything as a coach.”