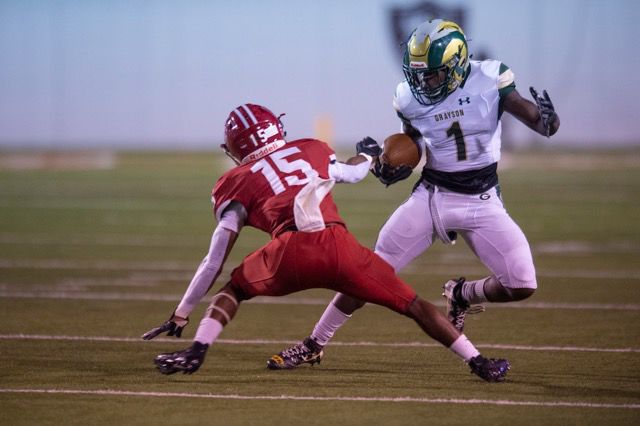 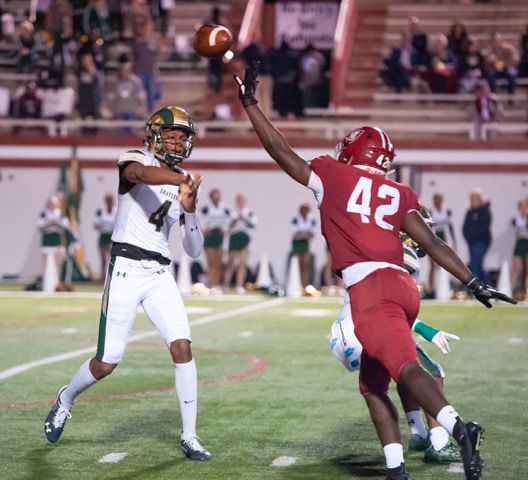 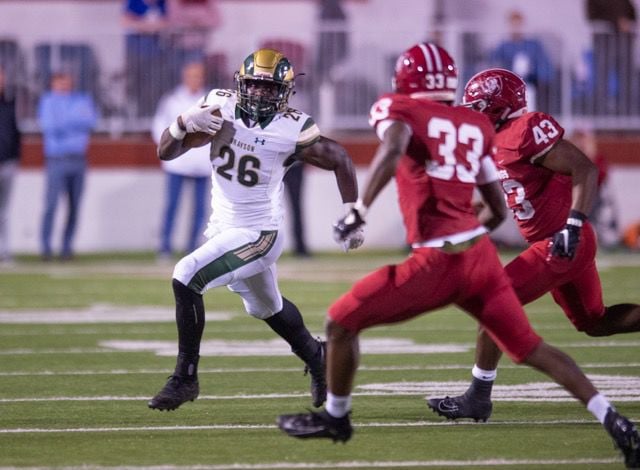 VALDOSTA — One more yard and a little magic.

That’s all the Grayson Rams needed to potentially extend their football season.

Trailing the Lowndes Vikings 28-20, the Rams look poised to even the score. Quarterback C.J. Dixon and Phil Mafah helped march the team down the field.

Mafah opened the drive with two runs for 13 yards before Dixon fired to junior Jaden Smith for nine more — enough for a second first down. On the next play, Dixon hit Smith again, but this time Smith made a highlight reel grab over the Lowndes defense to move the chains.

Dixon found Mafah on a pass for 31 yards, moving the Rams down into the red zone to set up first-and-goal from the nine-yard line.

Despite being well into scoring range, the Rams struggled — Dixon fired a pass incomplete and senior running back Lafayette Gurvin got nowhere on a called run.

On third-and-goal, Gurvin got the call again and this time broke out for an eight-yard burst to put the Rams on the Lowndes 1-yard line with 52.5 seconds left.

Needing to score and convert on a two-point conversion, the Rams lined up to try to punch the ball in. Gurvin got the ball on a direct snap and pushed toward the goal line, but Lowndes’ Thomas Davis and a host of Vikings teamed up to stop Gurvin shy of the goal line.

The Vikings (13-0) got the ball following the turnover on downs and ran out the clock, holding off the Rams (11-2) 28-20 on Friday night in the Class AAAAAAA quarterfinals.

“We had a little push, but we had a little too much penetration right there,” Grayson coach Adam Carter said of the final play. “It was a judgment call there on when they blow (the whistle). Obviously we couldn’t see from our angle. I thought we had a good enough push but we didn’t.

“That’s a good ball team, man, a good defense and to be right there within one foot is a tough pill to swallow, but our kids kept fighting.”

The Rams made their own breaks down the stretch, starting with a fumble recovery on a punt with more than 6 minutes to play. Lowndes punt returner Tiberius Drocea tried to field a punt, but mishandled it, giving the Rams a chance to climb back in the game down 28-13.

On first-and-10 from the Lowndes 20, Dixon and Gurvin connected on a 19-yard hookup to put the Rams in scoring position. Two plays later, Gurvin punched in a one-yard run to make it 28-20 with 5:51 remaining.

Carter talked about the importance of coming up with the fumble recovery late in the game, when it looked like the Vikings were about to run away with the lead.

“In these kinds of games, you need the ball to bounce your way a couple times,” Carter said. “We were headed in to score early on and we fumbled on the three-yard line and they returned it for a touchdown and that kind of took the air out of our sails a little bit.

“We made some, we lost some. They made a couple more plays than we did tonight. Our kids kept fighting. Turnovers don’t just happen. Big plays don’t just happen. You’ve got to be working your tail off for that stuff to happen, so I’m proud of them.”

A bad series by the Rams allowed the Vikings to get some separation. Dixon was sacked by Drocea for a big loss that set up a fourth-down punt.

Starting with a short field — first-and-10 from the Grayson 22 — the Vikings took advantage. Following a four-yard run by Justin Lee, Vikings quarterback Jacurri Brown found a hole and dashed 18 yards for a touchdown to give Lowndes a 28-13 lead with 8:43 left in the game.

The Vikings finished with 205 yards rushing on the night, with Brown carrying the ball 25 times for 158 yards and two scores.

“We didn’t play the quarterback well,” Carter said of the challenges his team faced against Lowndes. “At the end of the night, when you go back and look at it, we didn’t stop the quarterback run game. We had some opportunities, I thought, to do so.

“We talked about it this week, we had to stop him and we weren’t able to do that. That goes back to me — I’ve got to have a better plan. Hopefully we’ll be back next year and we’ll get another shot.”

The Grayson offense tested the Lowndes defense, recording 23 first downs with 24:10 time of possession. The Rams finished with 404 yards of total offense to the Vikings’ 221, but ultimately, the Vikings just got a little more done on the ground as they finished with 40 rush attempts for 205 yards.

Dixon completed 22 of 43 passes for 251 yards with one touchdown in the game. Mafah carried 17 times for 102 yards while Gurvin had 13 carries for 66 yards and a touchdown.

Smith had a game-high 10 receptions for 101 yards with a first-half touchdown.

“I just got here in March and people from around the state have talked about these kids being frontrunners and not being able to finish when it got tough,” Carter said. “We just showed that’s not the case at Grayson High School anymore. I told them it hurts me, too. I’m proud of them because they fought their tails off to the very last second of that game to try to give us a chance to win. They never folded. We took steps in the right direction this year. We didn’t come out with the end result, but we’re making steps. We’ll be back.”