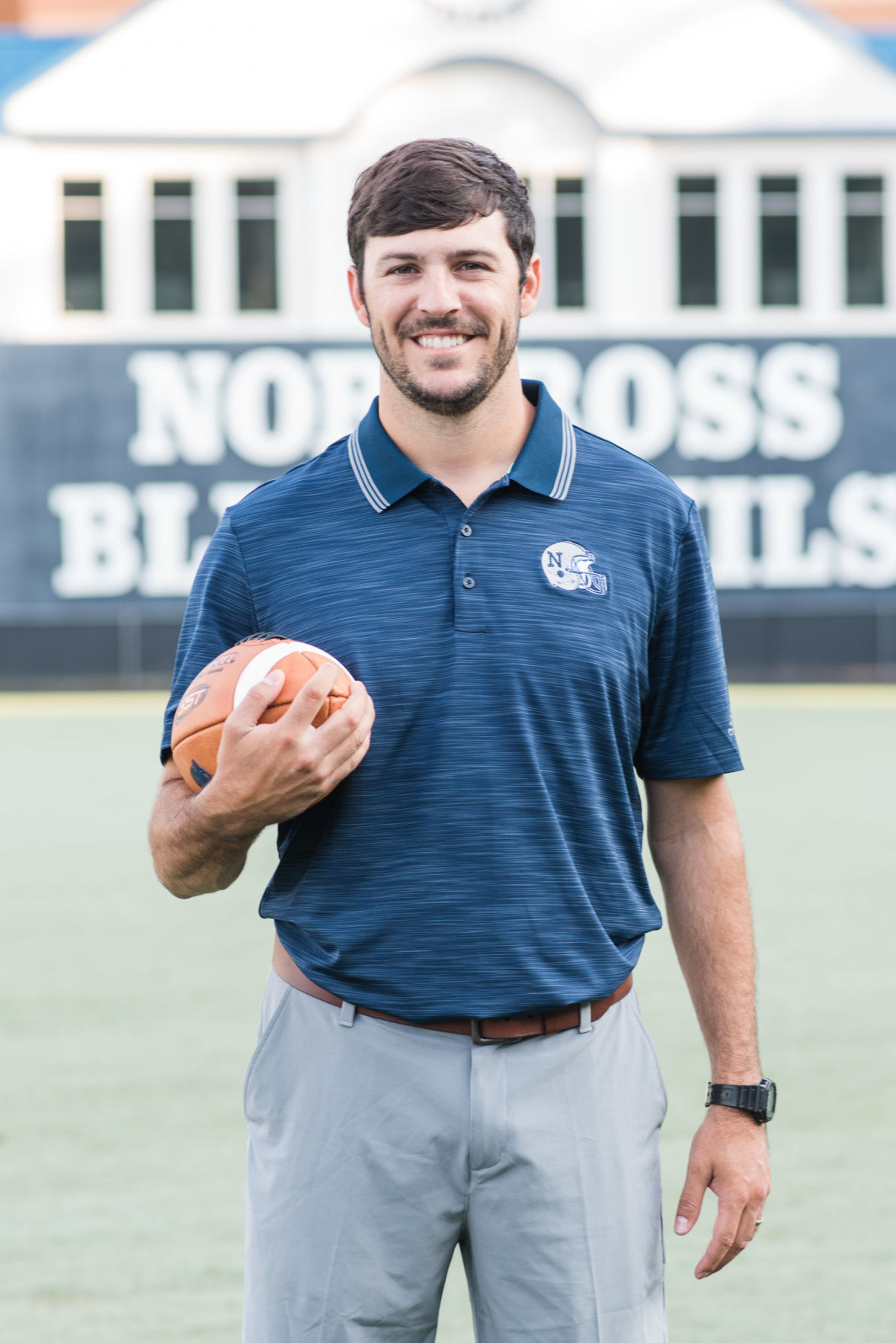 Norcross quarterbacks coach Tyler Maloof is a former two-sport standout for the Blue Devils who has returned to join the football staff to coach under his father, head coach Keith Maloof, following a strong college baseball career at Georgia. 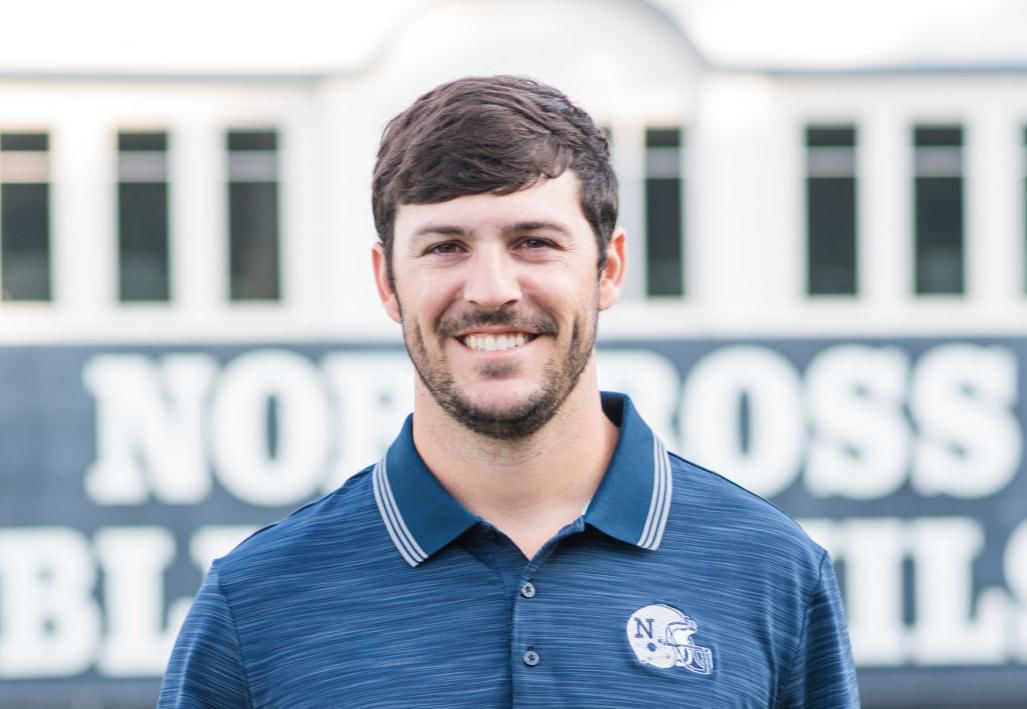 Norcross quarterbacks coach Tyler Maloof is a former two-sport standout for the Blue Devils who has returned to join the football staff to coach under his father, head coach Keith Maloof, following a strong college baseball career at Georgia.

Having grown up with a father, uncle and grandfather who are or were head football coaches, it’s comes as no surprise that athletics and coaching, specifically in football, have been a major influence on Tyler Maloof’s life. Now in his seventh season on the football coaching staff at his alma mater, where he serves as quarterbacks coach under his father, Norcross head coach Keith Maloof, and on the staff with his brother, ninth-grade coach Tanner Maloof, the two-sport standout and former University of Georgia baseball pitcher spoke recently with Daily Post staff writer David Friedlander. Among the topics they discussed include the influence Maloof’s father, uncle (former Meadowcreek and Dacula coach Kevin Maloof) and grandfather (Hall of Fame St. Pius X coach George Maloof) have had on him on and off the field, as well as his promising baseball career that was cut short by injury.

DF: You’ve been back at Norcross about six or seven years now. Seems like yesterday that I was covering some of your football and baseball games as a player. Does it seem that long to you?

DF: As I remember, you had a really good baseball career in college, including tying Georgia’s single-season record for saves. In fact, you were drafted in the later rounds of the 2011 draft by the Cleveland Indians, but elected to come back to Georgia before running into injury issues. Yet I get the feeling you have no regrets about your decision at the time.

TM: No, not at all. It’s been cool fo follow some of my teammates who have gone to the minor leagues and some who are now playing in the big leagues (including Peachtree Ridge grad Jared Walsh and former Atlanta Braves and current Los Angeles Dodgers pitcher Alex Wood).

(The signing bonus) wasn’t life-changing money when I got drafted, and we had a really good team coming back (in 2012), and I wanted to be a part of it. If I’d had a better year and not gotten hurt, I think I would’ve had that opportunity to go chase that dream. I knew, kind of, that baseball wasn’t everything I wanted (to do). I knew I wanted to coach and teach at some point. That was kind of what I was really passionate about.

DF: It does seem a little strange that you went on and played baseball in college, and yet you’re back at Norcross coaching only football.

TM: I’m enjoying my spring. (laughs) I mean, I’ve always been passionate about football. I love football. I just happened to be a little better at baseball. Baseball paid the bills.

DF: Take us back to your football playing days, if you would. How different is it now coaching with your dad now from playing for him back in the day?

TM: I knew you were going to ask that question, so I’ve been thinking about it. Really, not much has changed. He’s still really hard on me, I think. But it is different coaching with him. It’s been unique because we haven’t had a lot of turnover at Norcross. So (defensive coordinator Pat) Standard, (defensive tackles) Coach (Corey) Richardson, Coach (defensive backs/speical teams coach Heath) Herron — almost all the defensive staff are the same since when I played. That has probably been the biggest difference about working with some of my coaches. But at the same time, my dad tried to treat everybody the same. He’s always kind of treated me the same. He’s asked me to work hard and do well, and I’ve tried to do that.

DF: Let’s go back even further. With your dad and uncle and grandfather all being head coaches, were there any expectations in following their footsteps? I mean, this is something you obviously wanted to do, but being in a family of coaches, did you feel any expectations to go into coaching?’

TM: You know, going to college, I really didn’t think about coaching at all (early on). I have a business degree. I have a degree in finance. I thought that’s what I wanted to do. Then the further along I got into it, I mean, my dad never one time pressured me teaching and coaching. If anything, it was the opposite. He was wanting me to (explore) doing something different. But I knew that having a business degree, I could still teach and coach at the end of the day. So it’s something I wanted to do. After playing baseball, I worked for the UGA football team (as a graduate assistant) for two years, and I wanted to teach and coach.

DF: Now it seems pretty obvious your dad is going to have some influence on you. But what about your uncle and grandad? What kind of influence have they had on you, not only coaching, but going back into your playing days?

TM: Growing up, my uncle was at Dacula so long. He was always associated with Dacula. My grandfather was at St. Pius for so long, so he’s always been associated with St. Pius. Now my dad’s been at Norcross close to 20 years. I think that’s really cool, and that’s always kind of had an impression on me, not just about winning football games, but it’s so much about the community. It’s so much about the people. At the end of the day, it’s about the kids. Growing up, especially being at Norcross and seeing my peers and how much of an impact my dad, my uncle, my grandpa had on kids and football players, I think that was something that drove me to get into coaching.

DF: If I may ask further about the Maloof family dynamic, I know it’s kind of hard to separate it from sports, but how big an influence did they all have on you outside the athletic realm?

TM: It’s had a big impact. Being in Georgia and living not far from that side of the family and getting to see them a lot, probably more compared to other people, that’s been big. Just around the holidays and getting together as a family, a lot of it, as you said, is centered around football and sports, but I think one things that I always remember growing up is my dad never missed anything. He coached me in baseball every spring when he finished with football. He was at my (youth) football practices. I mean, originally, I wanted to do that college thing, and after spending two years, it really helped make that decision going into high school knowing my dad was there for everything — coached me in baseball, was at all my baseball and basketball games. I mean, everything growing up, he didn’t miss. That was really important to me.

DF: Something that just occurred to me. Your granddad played his college football at Georgia Tech, and I’m sure there was a very strong Yellow Jackets influence in the family. So how did your decision to attend and play at Georgia go over? Did any friendly needling go on with regard to the rivalry?

TM: My uncle went to Tech and played at Tech a little bit, and my dad played at West Georgia, but he grew up a big Tech fan — both of them, obviously. Growing up in Winder, 20 minutes outside of Athens, I grew up a Tech fan. All of my friends were Georgia fans, … so I was the token Tech fan (around the neighborhood). But I really don’t remember it being too big of a deal. My dad probably had the better perspective on it. And I always remember my grandad saying, ‘Whatever pays the bills.’ That’s all that mattered. I don’t know that I ever got him in picture with a Georgia hat on. I think my dad wore a Georgia shirt the four years I was there.

DF: Finally, let’s talk about your future. I know you’re happy as an assistant, but have you given any thought about being a head coach at some point?

TM: I think everybody in the position I’m in wants to be a head coach at some point. I think I do at some point. But seeing some of the things my dad does on a daily basis that aren’t necessarily X’s and O’s, that aren’t necessarily football involved when it comes to raising money or dealing with parents — all the things a head coach has to deal with behind the scenes — I’m not ready for that yet. I’m enjoying just being a coach and coaching the quarterbacks and doing the day-to-day things that involves being a coach. So it’s a great question, but my dad’s an awesome person to work for. He’s been super supportive. When you look at just how many people have stuck around at Norcross, that’s a testament to how much people enjoy working for him.