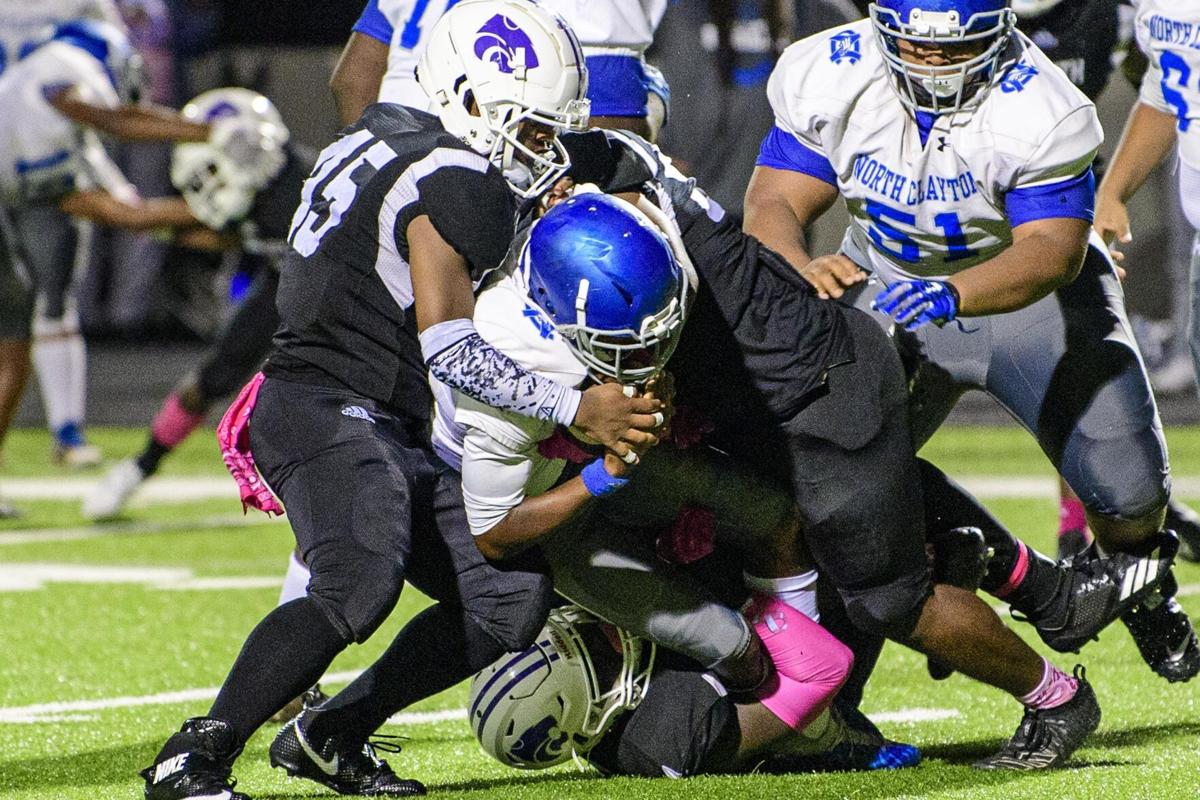 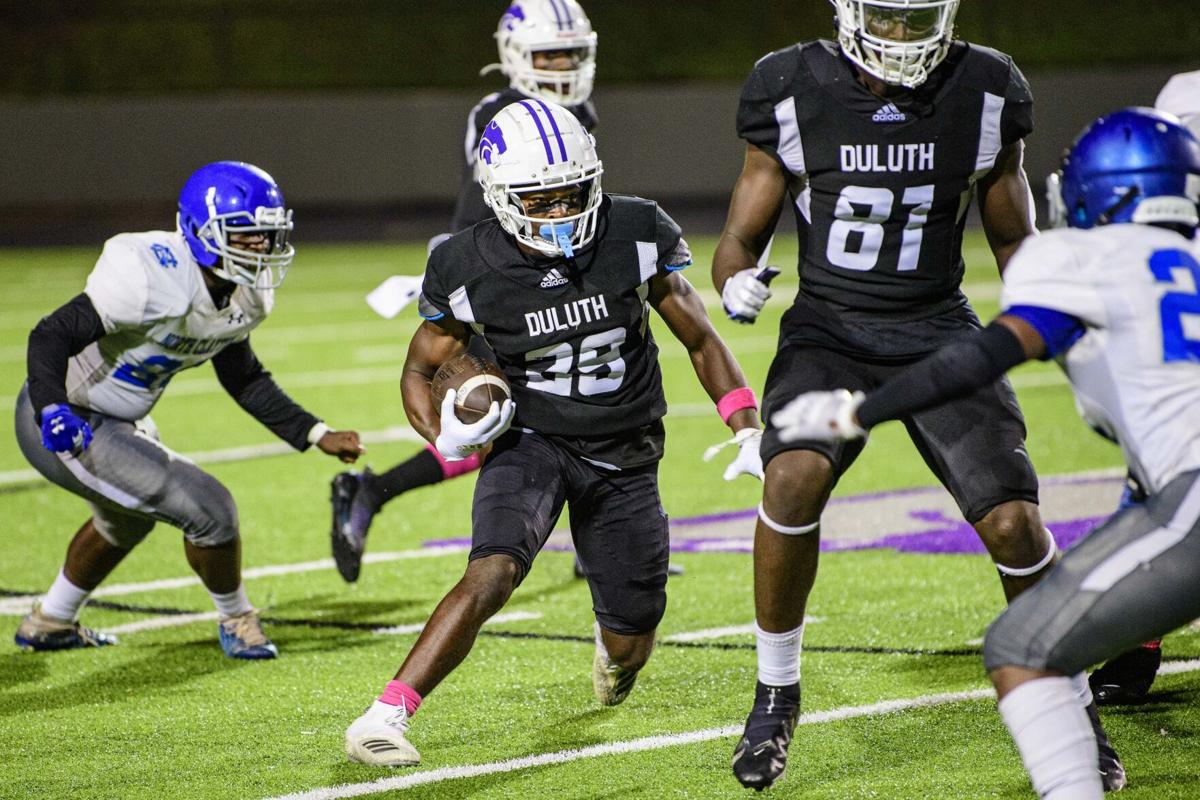 Duluth’s River Thompson-Brown (29) runs for yardage against North Clayton during a varsity football game on Thursday, Oct. 7, 2021, at the Tim Maxwell Memorial Stadium in Duluth.

Duluth’s River Thompson-Brown (29) runs for yardage against North Clayton during a varsity football game on Thursday, Oct. 7, 2021, at the Tim Maxwell Memorial Stadium in Duluth.

DULUTH – All week long, Duluth head coach Cam Jones preached to his team that just because its football game against North Clayton on Thursday night was a non-region affair during Fall Break, it didn't mean it was time for a vacation.

While the Wildcats were sloppy at times, especially late, they took care of business, for the most part, against the overmanned Eagles for a 42-12 victory at Cecil Morris Field at Tim Maxwell Stadium.

Meanwhile, the Duluth (3-3) defense held North Clayton to 111 total yards, including just 19 on the ground, to move back to .500 for the season.

It wasn't a perfect night for the Wildcats, who turned the ball over three times, two of which led to fourth-quarter scores for the visiting Eagles (0-7).

But Jones was encouraged about the way his team bounced back from many of those mistakes to get the job done.

It didn't take long for Duluth to establish dominance despite giving North Clayton (0-7) possession near midfield with a squib kick on the opening kickoff.

The defense immediately starting the game with a three-and-out on its way to limiting the Eagles to just 62 first-half yards.

The Wildcats then needed just six plays to march 77 yards, with Ratliff finishing the drive with a 32-yard scoring strike to Thomas on a slant pass for a 7-0 lead with 8:17 left in the first quarter.

Despite a roughing the punter penalty that extended North Clayton's next drive, Duluth eventually forced a punt and got an interception by Demarco Ward off a tip on the next two possessions, both of which were turned into immediate scores.

Wilmer Perez bolted up the middle for a 70-yard TD after the former at the 4:24 mark of the opening frame, while Ratliff zipped another slant pass for a score, this one of 66 yards to Spencer on the final play of the quarter, and the Wildcats had scored on three consecutive snaps to take a 21-0 lead.

Ward had a second interception in the second quarter, one he returnred 37 yards for a pick six, only for it to be nullified on a roughing the passer penalty.

No matter, as the Wildcats kept the Eagles off the board in the second quarter, while Ratliff added a 25-yard TD pass to Thomas at the 7:59 mark and ran another score in from 14 yards out with 54.2 seconds left in the half to send Duluth into intermission with a 35-0 lead and lead to a running clock in the second half.

The Wildcats' longest drive came to opening the final stanza, when Ratliff completed 4 of 6 passes, not including a touchdown pass that was called back, before hitting Spencer for 6-yard scoring strike to give Duluth its biggest lead of the game at 42-0 with 4:45 left in the third quarter.

Things got a little sloppy from that point for Duluth, with three fumbles, two of which North Clayton was able to capitalize on.

The first came when Kenyon Love pounced on a muffed punt on the last play oft he third quarter that set the Eagles up on the Wildcats' 25-yard line after 10 more yards were tacked on for an illegal block penalty before the turnover.

Three plays later, Jameake Johnson powered his way into the end zone from three yards out to get North Clayton on the scoreboard at 42-6 following an unsuccessful two-point conversion with 10:16 remaining.

On Duluth's next snap from center, another fumble Trent Cotson scooped up a loose ball at the North Clayton 44 and was off to the races for a 56-yard scoop and score to pull the Eagles to within 42-12 with 9:05 left.

Cotson came up with another fumble recovery with 34.2 seconds left, and while North Clayton ran out of time, coach Cap Burnett was encouraged by how the Eagles kept fighting and were able to cash in on the Duluth mistakes.

“It was just good for the kids to see that they can do it,” Burnett said. “Now we've just got to get that same effort at the beginning out of the gate. … We're going to use that and build off that movement into next week.”