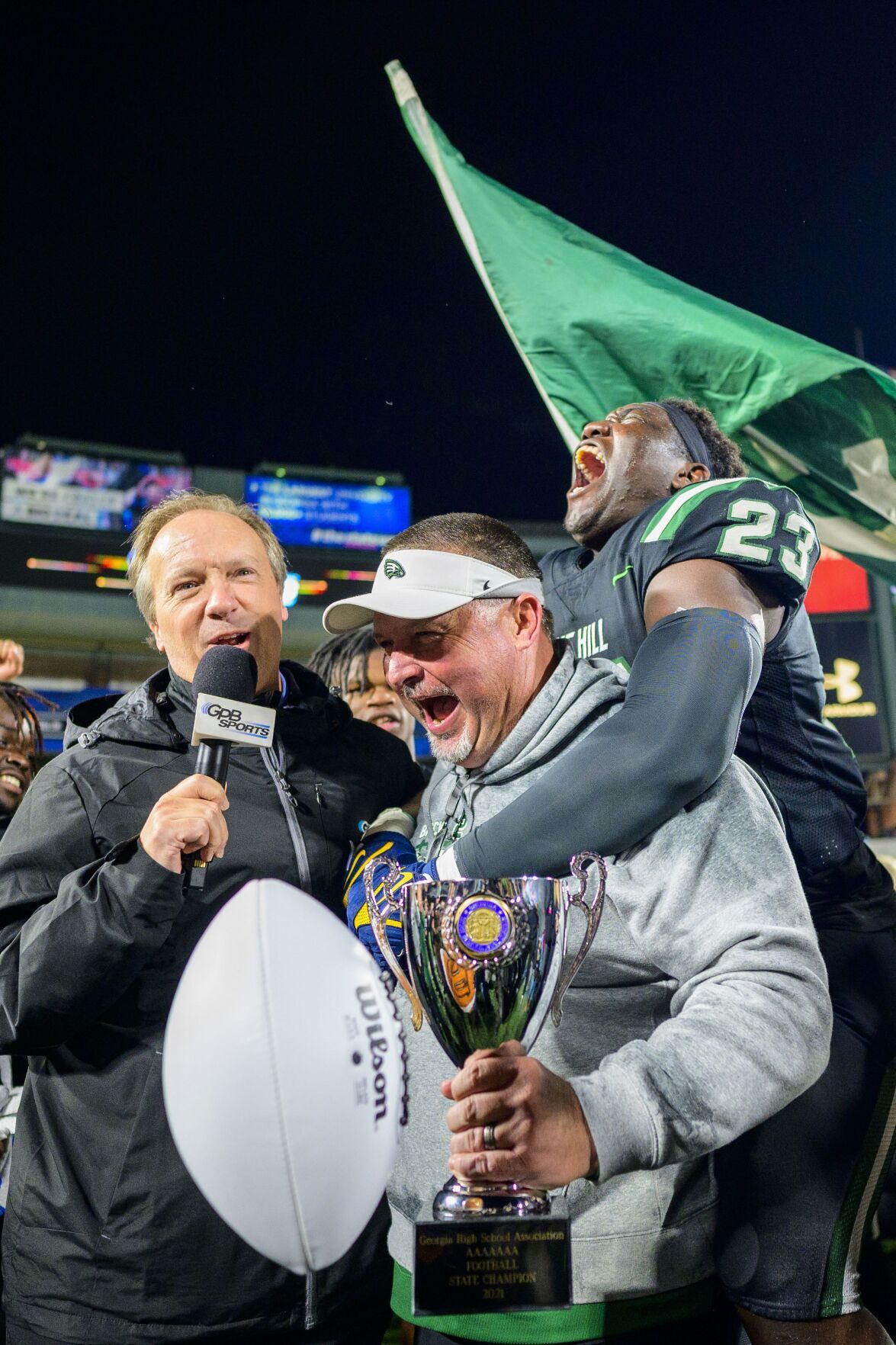 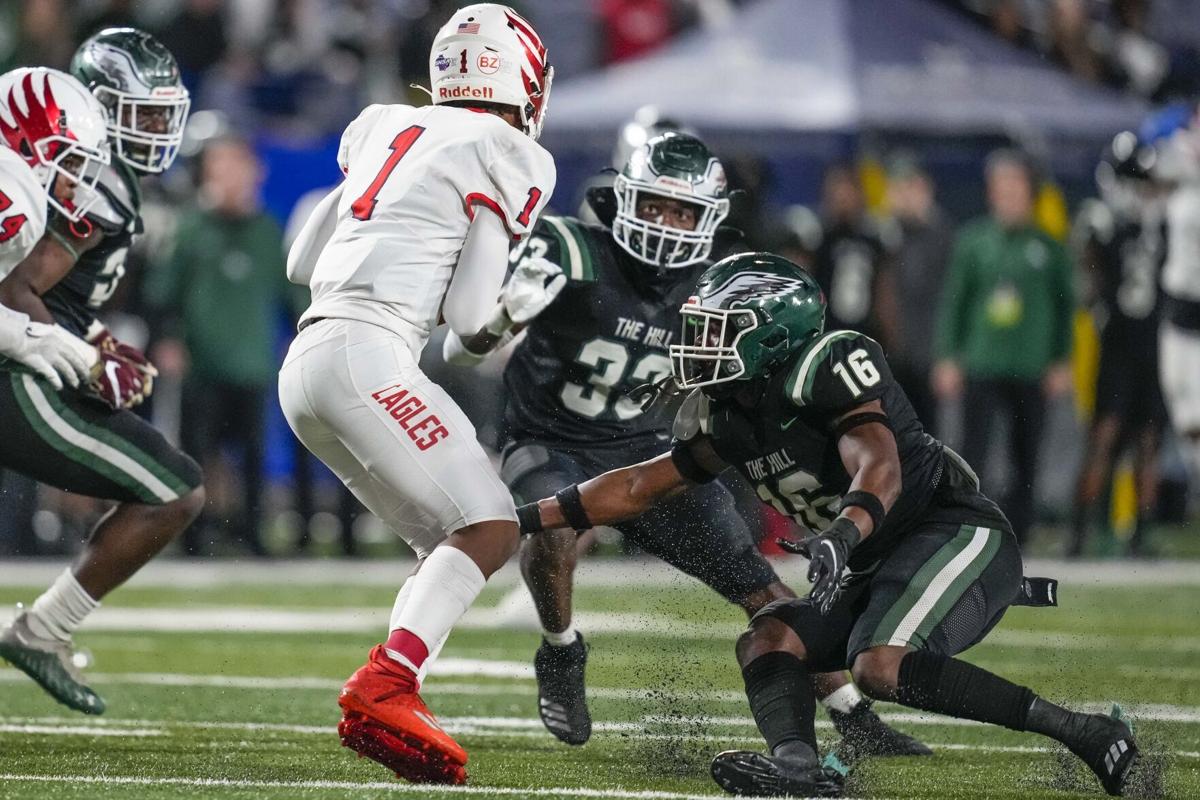 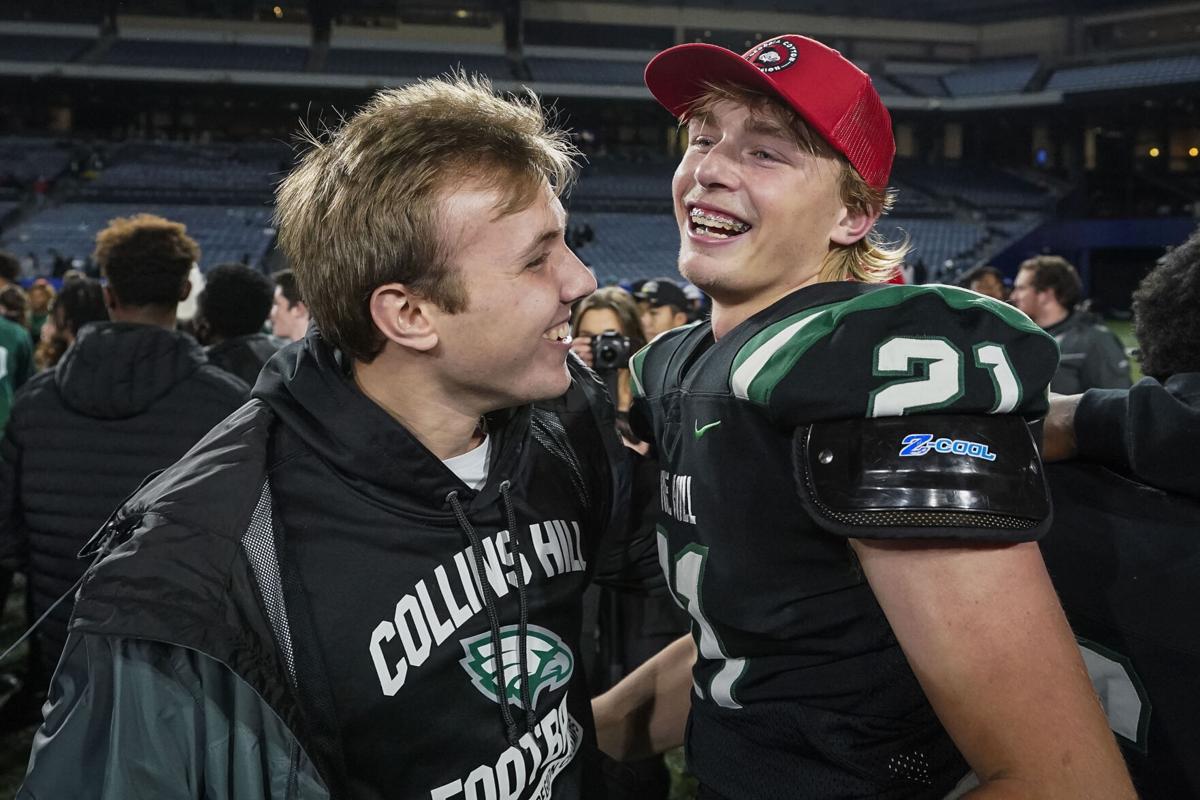 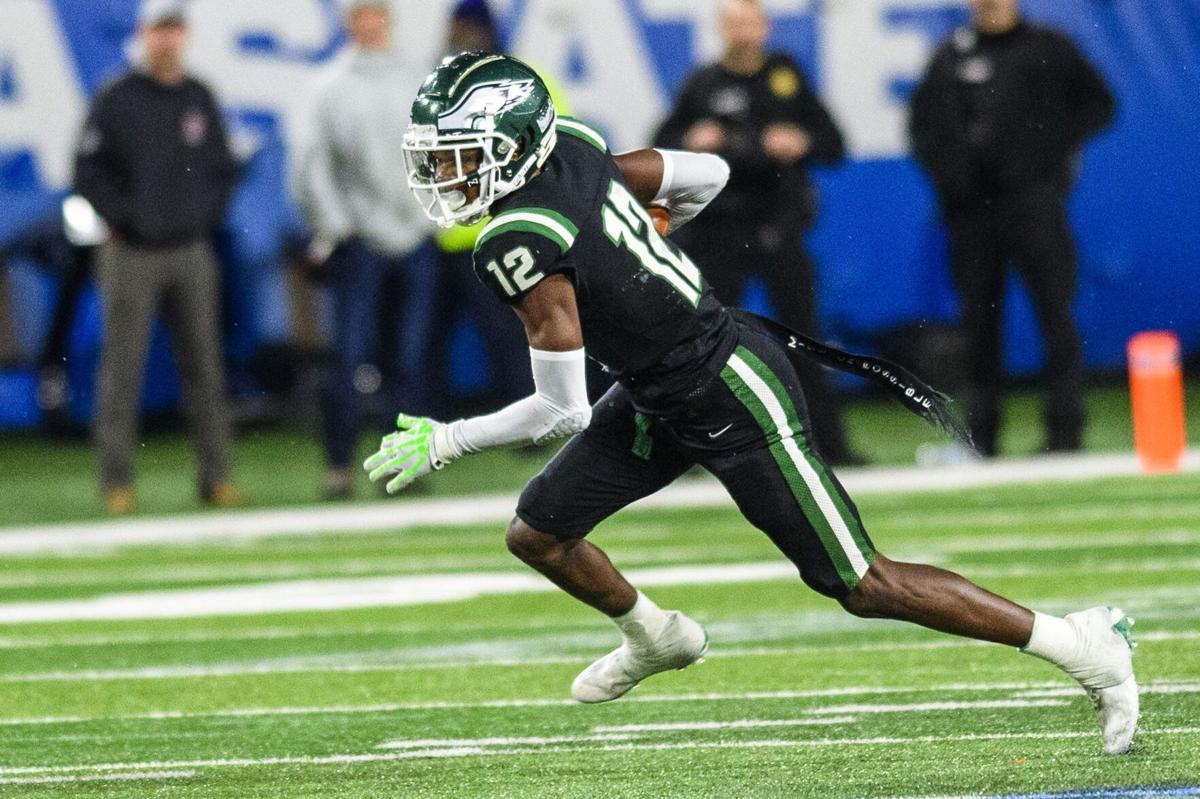 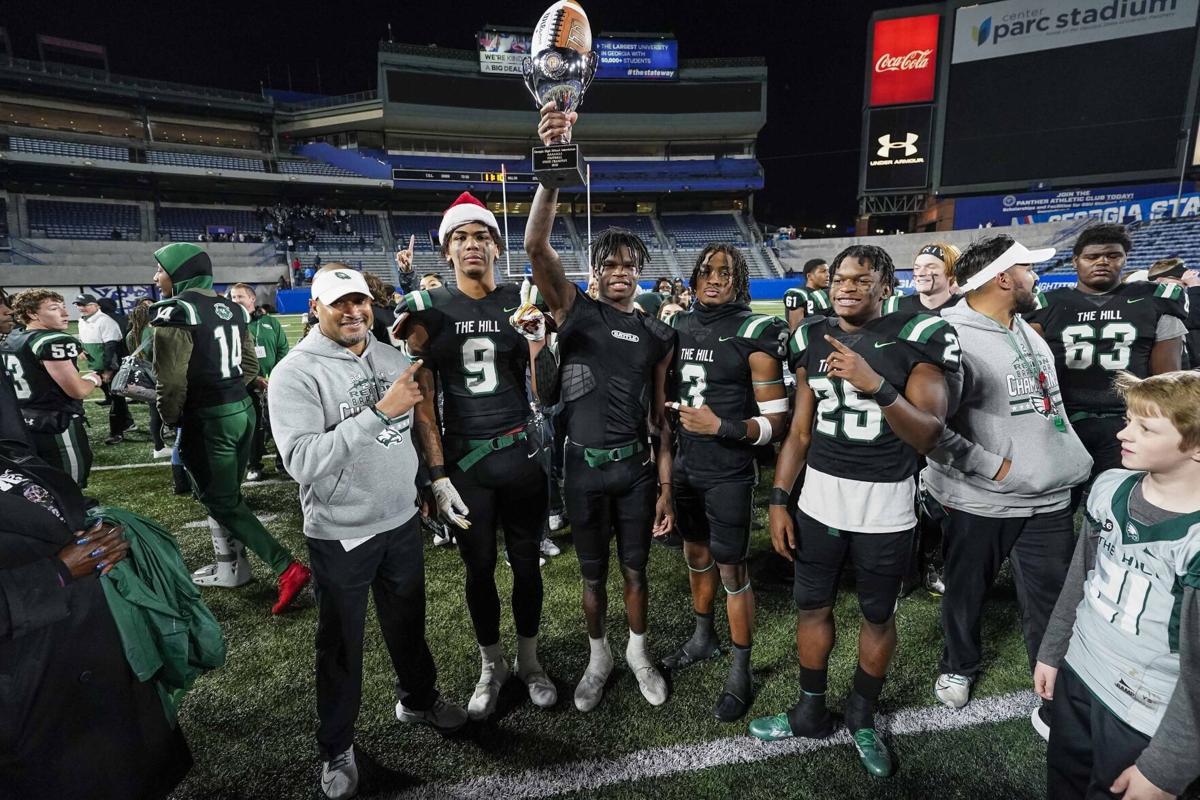 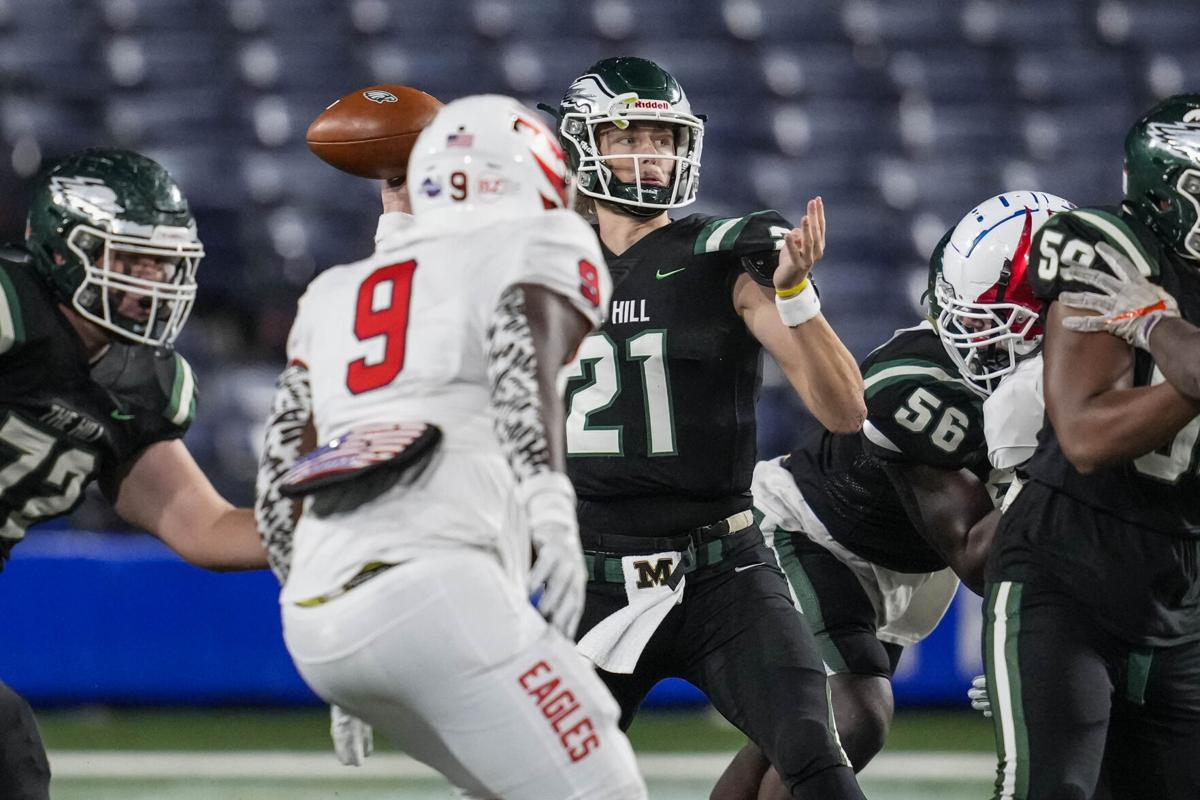 Scenes and action from Collins Hill’s win against Milton in the GHSA State 7A football championship game at Center Parc Stadium at Georgia State University in Atlanta. Photo: Dale Zanine

Scenes and action from Collins Hill’s win against Milton in the GHSA State 7A football championship game at Center Parc Stadium at Georgia State University in Atlanta. Photo: Dale Zanine

And the No. 1 state-ranked and consensus top-five nationally ranked Eagles knew they would need it again in the state championship game against Milton.

After all, they’d seen this script before.

“We had the mindset, the goal, the drive that we were going home with this championship,” senior defensive end Asani Redwood said. “We just rallied around (each other). ...We wanted (Milton) to tap out, and I think in the end, we did that.”

The Eagles, indeed, did that, as that patience and poise helped them stay focused until the offense got going, eventually pulling away for a 24-8 win Saturday night at Georgia State’s Center Parc Stadium. They finished with a 15-0 record, avenged last season’s state finals loss to Grayson and gave Gwinnett its second straight AAAAAAA state champion, as well as its fourth in the last six seasons.

Sam Horn completed 22 of 33 passes with an interception for 243 yards and two touchdowns, and became just the eighth quarterback in Georgia high school history to reach 10,000 passing yards for his career.

Meanwhile, Travis Hunter also had a milestone night with 10 receptions for 153 yard and a TD, the latter of which tied him with former Rabun County standout, and current Georgia redshirt freshman, Braxton Hicks as the state’s TD receptions leader with 46.

“I’m just so proud of our defense for bending and never breaking, and just playing physical and tenacious and giving our offense a chance to do what it needed to do,” Collins Hill coach Lenny Gregory said. “(Milton) is really good on defense. We knew that their front is elite. … Minus (Bryce Thornton’s 66-yard) kickoff (return) — I’d like to have that back, do that over again — but minus that, we were almost perfect (Saturday) night.”

Early on, it was Milton (13-2) that was almost perfect, employing the same basic plan of shortening the game early on that Grayson had attempted in last week’s semifinal, and executing that plan even better than the Rams did.

However, those accomplishments netted them nothing in terms of the scoreboard.

Twice, Milton moved into Collins Hill territory in the opening 24 minutes and twice came away empty.

The first time came on the game’s opening drive, as Milton rode the legs of running back Jordan McDonald and quarterback Devin Farrell to march 50 yards in 15 plays down to the Collins Hill 33-yard line, draining 8:37 off the clock.

But on fourth and 4, Farrell was sacked for a 2-yard loss by Dion Crawford, one of six Collins Hill sacks on the evening, to turn the ball over on downs.

Similarly, Milton embarked on a five-play, 42-yard drive to take the ball as deep as the Collins Hill 38 late in the half, only to be turned away when Bryant and a host of Green and Black Eagles stuffed McDonald for no gain on fourth and 1.

“We knew they were going to try to run the ball and … overpower us,” Redwood said. “Having Grayson last week when they ran the ball a lot helped get us more physical, had us knowing what to do. … We just went out to put hits on (McDonald), hits on (Farrell), and we did that.

“They know who we are. We’re all pass rushers on this team. Whether it’s a (defensive end), linebacker or safety, we all can rush the passer. When it came down to it, that’s what we wanted to do — stop the run and force them to pass.”

Meanwhile, Collins Hill had some trouble getting its own passing game going during its short time with the ball, due in no small part to the pass rush of Milton’s five-star junior defensive end L.T. Overton, who finished the game with six combined tackles, 3½ tackles for loss, a half sack and a QB hurry.

But Horn did find a bit of a rhythm midway through the second quarter, completing six passes worth 61 yards during a seven-play, 77-yard drive.

The final 10 of those yards came on a toss out in the flat from Horn to Spenser Anderson, who dashed into the end zone with 4:47 left in the first half for a 7-0 lead that Collins Hill took into intermission.

But it was the opening drive of the second half when Horn and the Eagles began to find their stride.

The Missouri-bound signal caller hit Hunter along the left sideline on the first snap of the third quarter, and the Florida State commit found a seam and bolted 50 yards before Milton’s Zyere Horton got an angle on him to take him down at the Milton 30.

Horn then scrambled for 18 yards, and three plays later, took off on a QB draw for a 6-yard touchdown that gave the Eagles breathing room at 14-0 just 1:01 after the second half kickoff.

“That first drive (of the second half) meant a lot,” Horn said. “I challenged everybody … like I do every second half and said, ‘Let’s be better, and let’s do this thing,’ and they did. I’m just so proud of these guys.”

Collins Hill really gained a firm grasp on the game when Horn and Hunter hooked up on a 6-yard scoring strike to cap an eight-play, 56-yard drive and extend the lead to 21-0 with 1:13 left in the third quarter.

The Eagles got the ball right back on the next play from scrimmage, with Hunter forcing a fumble and Christian Harris scooping it up at midfield with 56 seconds left in the period.

They eventually settled for Isaac Bonacci’s 26-yard field goal to make it 24-0 just 1:33 into the fourth quarter.

Only Thornton’s big kickoff return, which set up Farrell’s 1-yard sneak and two-point conversion with 7:20 left, kept Collins Hill from a shutout.

But that mattered little after the Eagles not only made history with the program’s first state title, but also kept alive the possibility of making more history by being invited to the national championship game in Las Vegas.

“I mean, it’s going to be known as the greatest team to play at Collins Hill,” Gregory said. “Again, looking at the stats, it might be one of the greatest teams ever to play in the state of Georgia.”

The historic state championship won this past weekend won’t be the end of the 2021 high school football season for Collins Hill after all.

Seminoles can't wait for Hunter to take the field at Doak Campbell. A Renaissance is about to happen in Tally led by Hunter.

No. 2 Shiloh defeats No. 4 Buford in 8-AAAAAA boys basketball