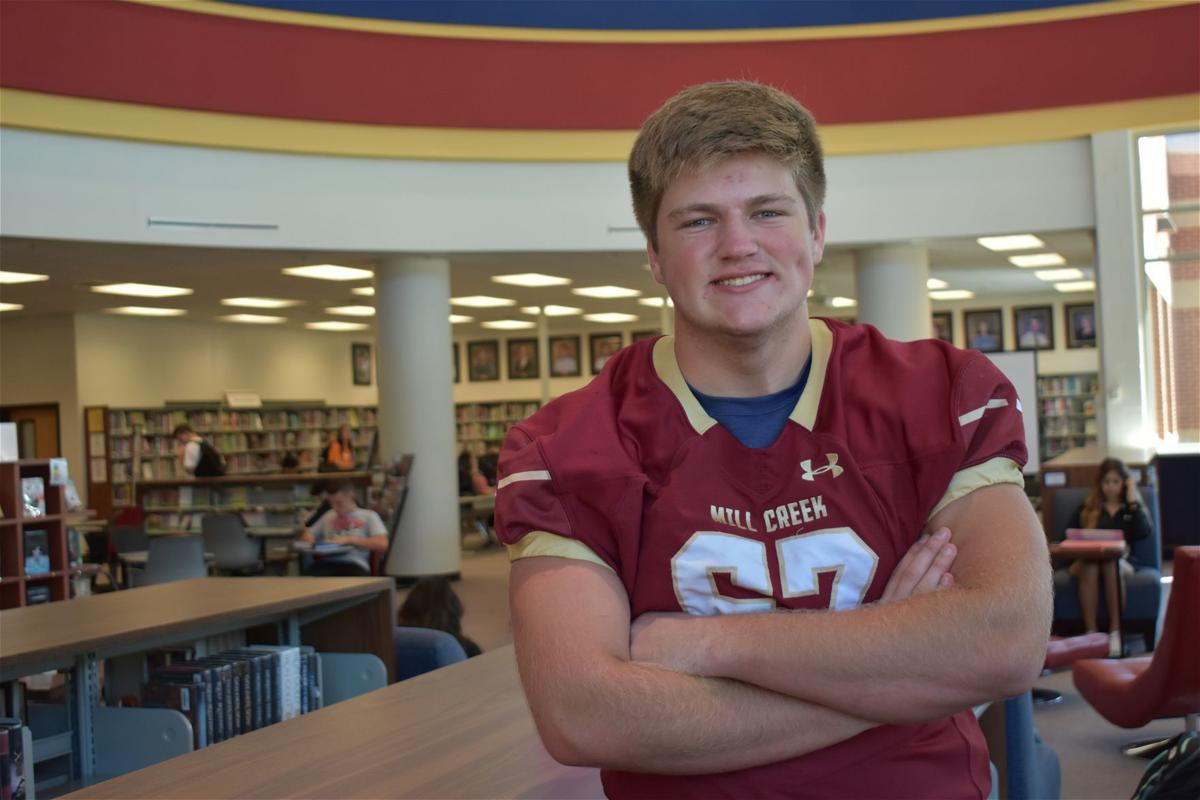 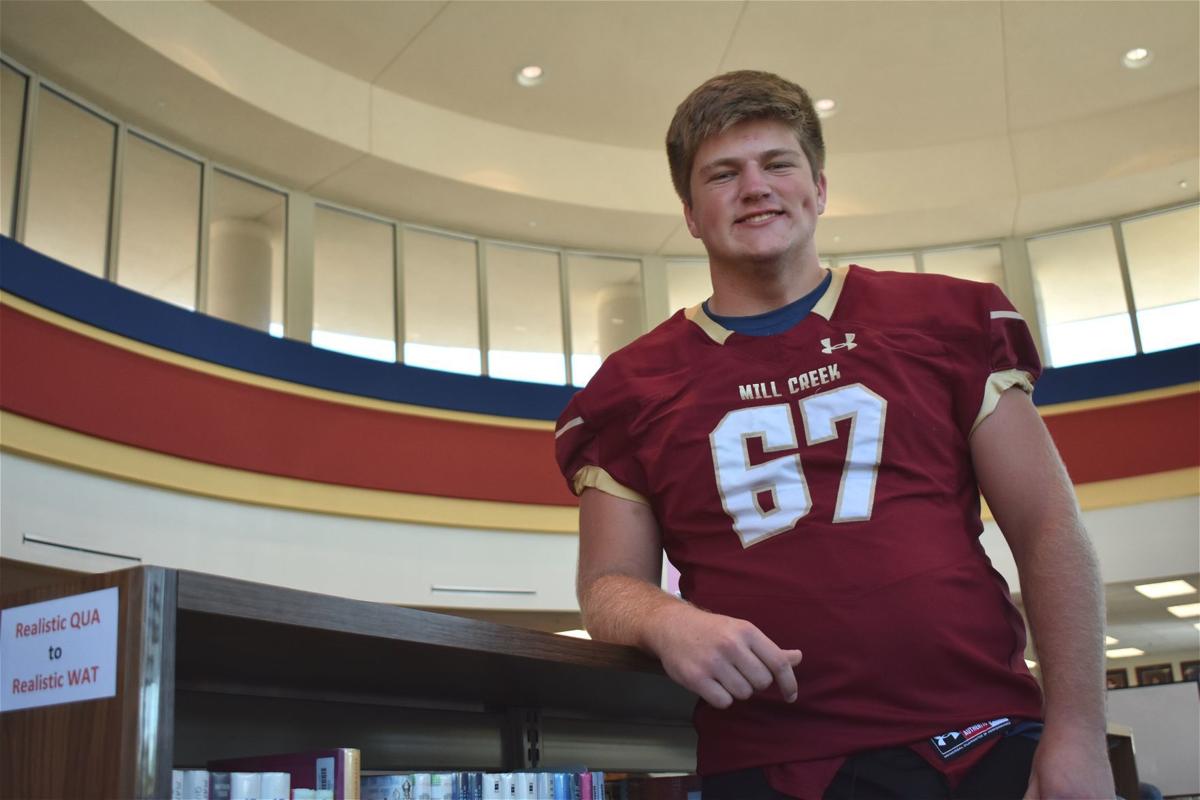 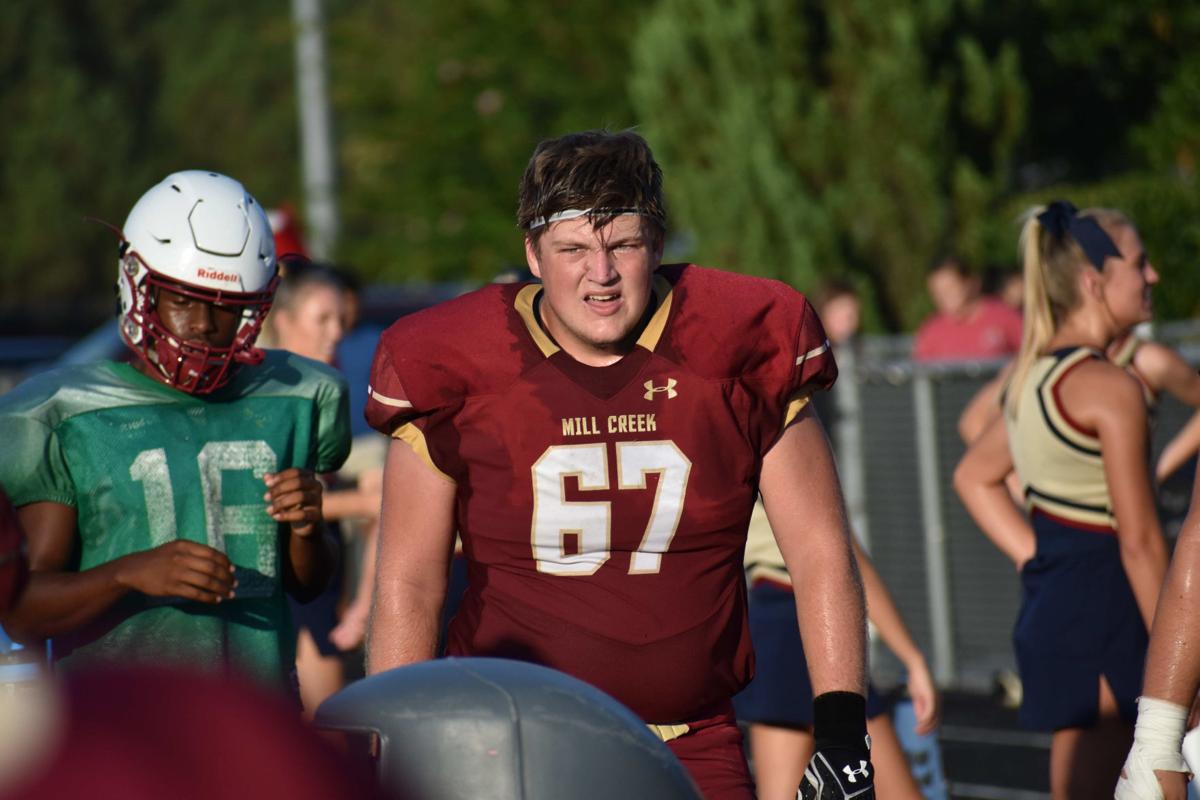 Mill Creek’s Bryce Hancock (67) walks off the field during the Hawks’ preseason scrimmage with Brookwood. 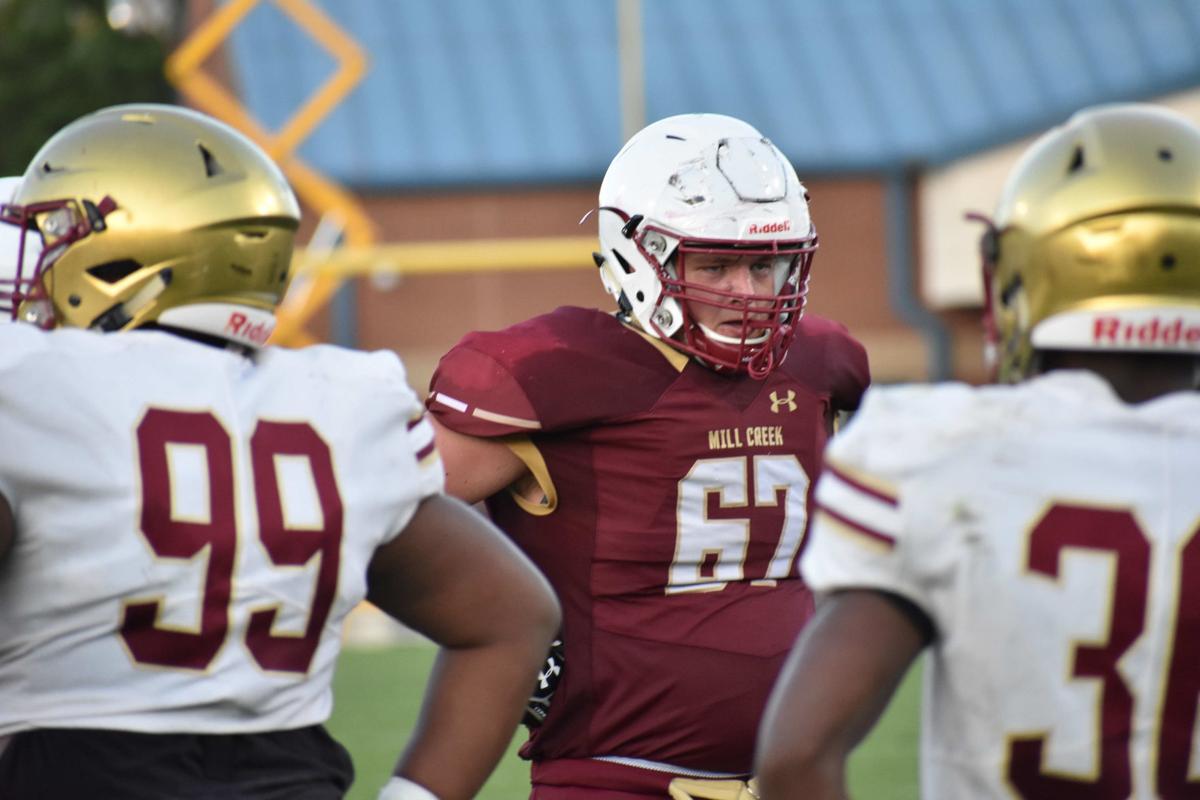 Mill Creek’s Bryce Hancock (67) lines up before a snap in a preseason scrimmage with Brookwood. 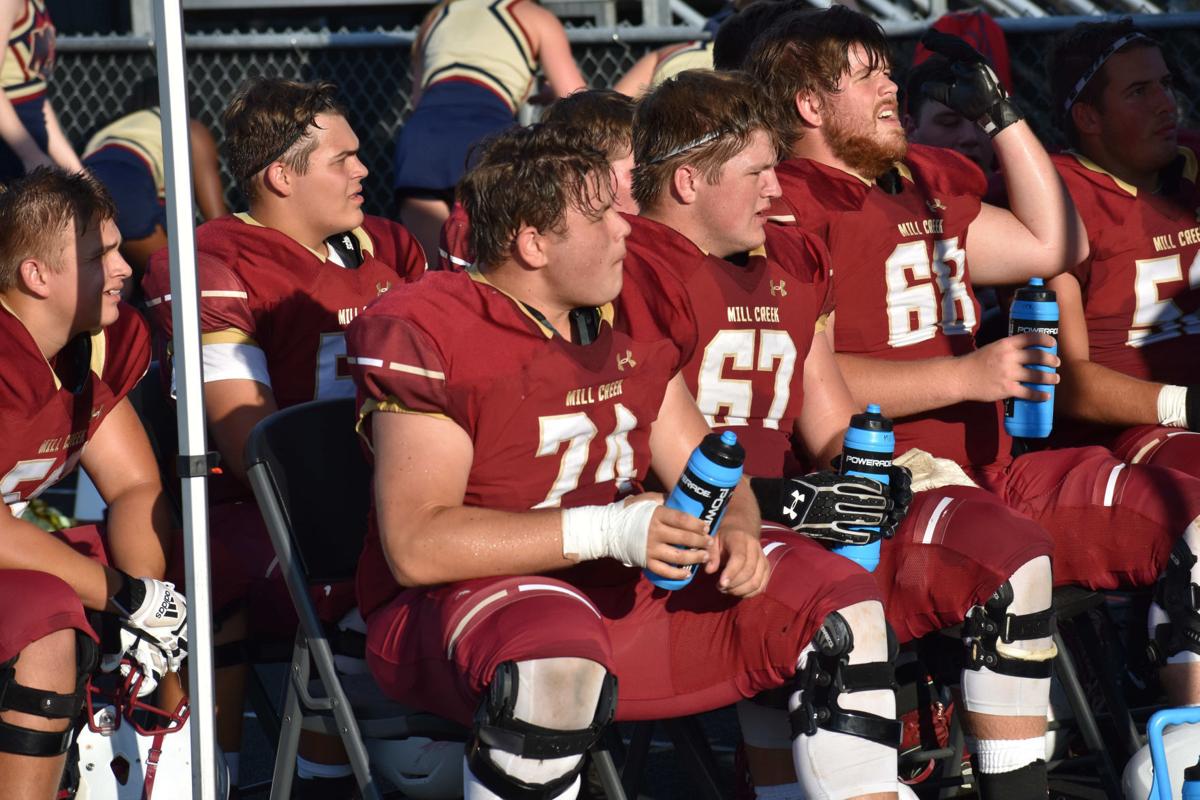 Mill Creek’s Bryce Hancock (67) and his fellow linemen listen to their coaches during a break at this year’s preseason scrimmage with Brookwood. 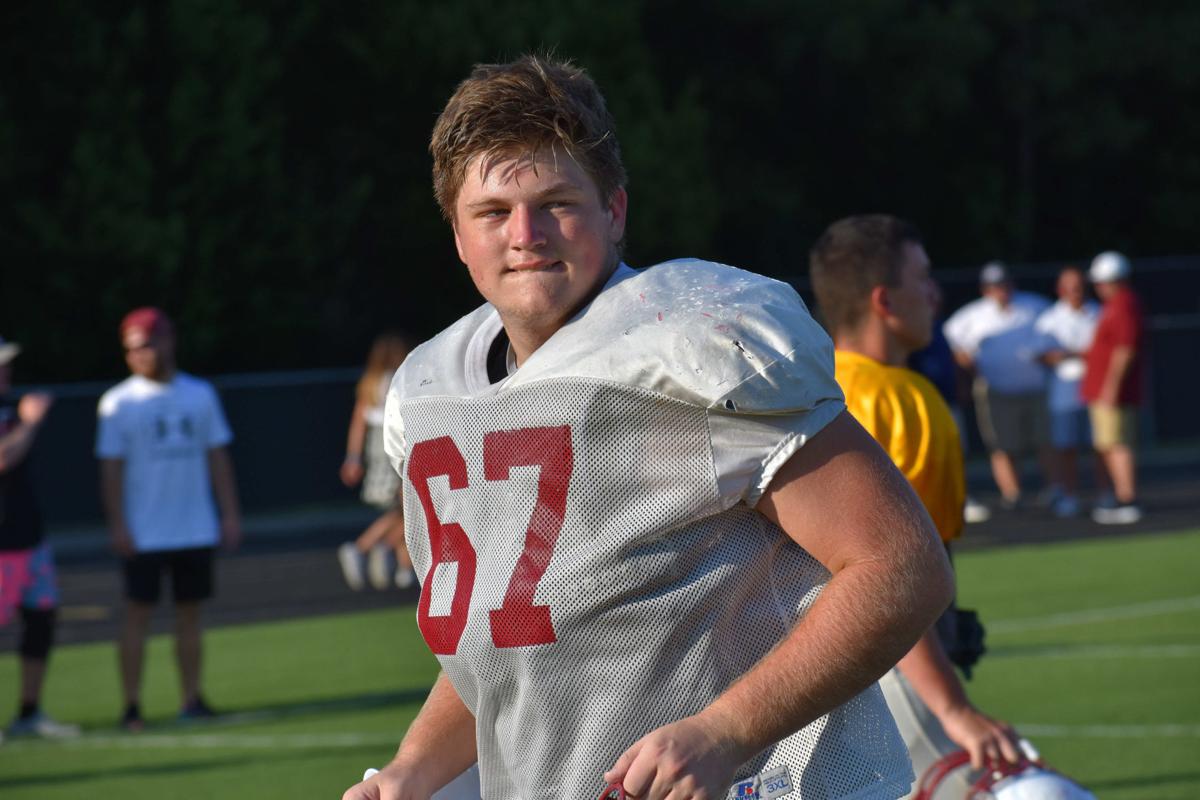 Bryce Hancock jogs across the field during Mill Creek’s Kickoff at the Creek this year. 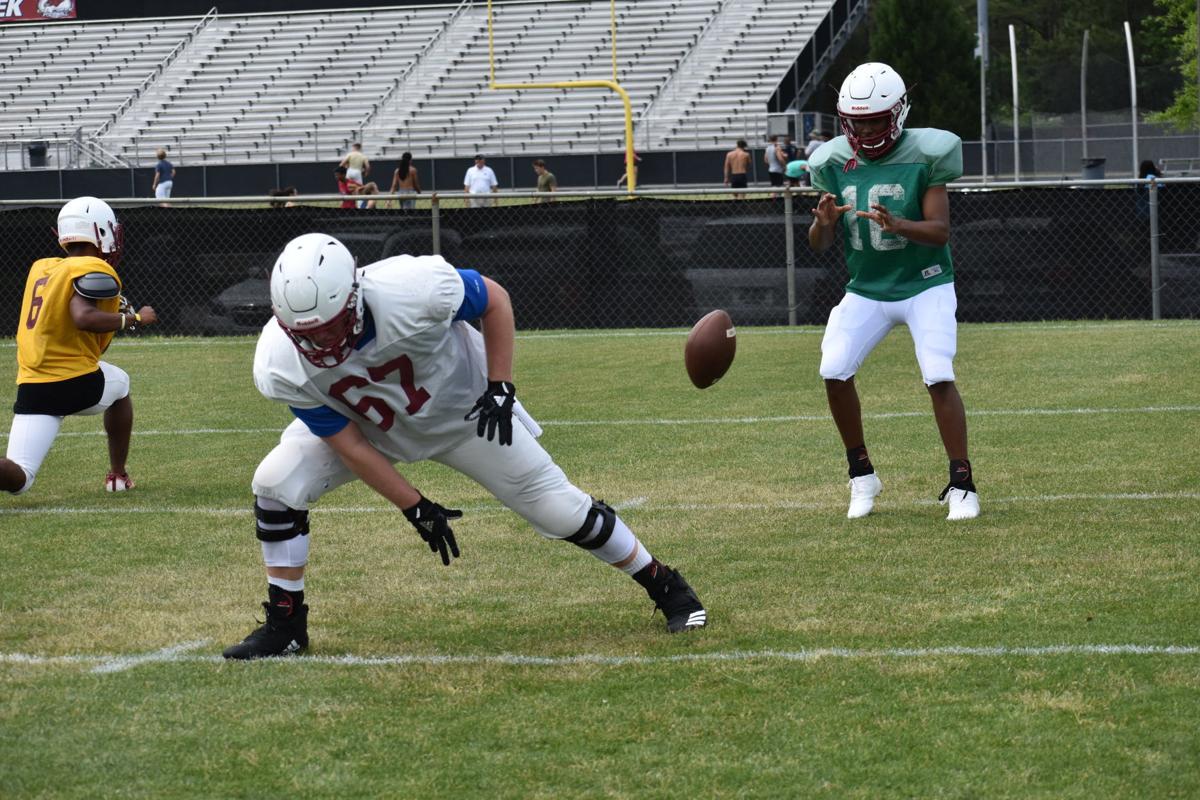 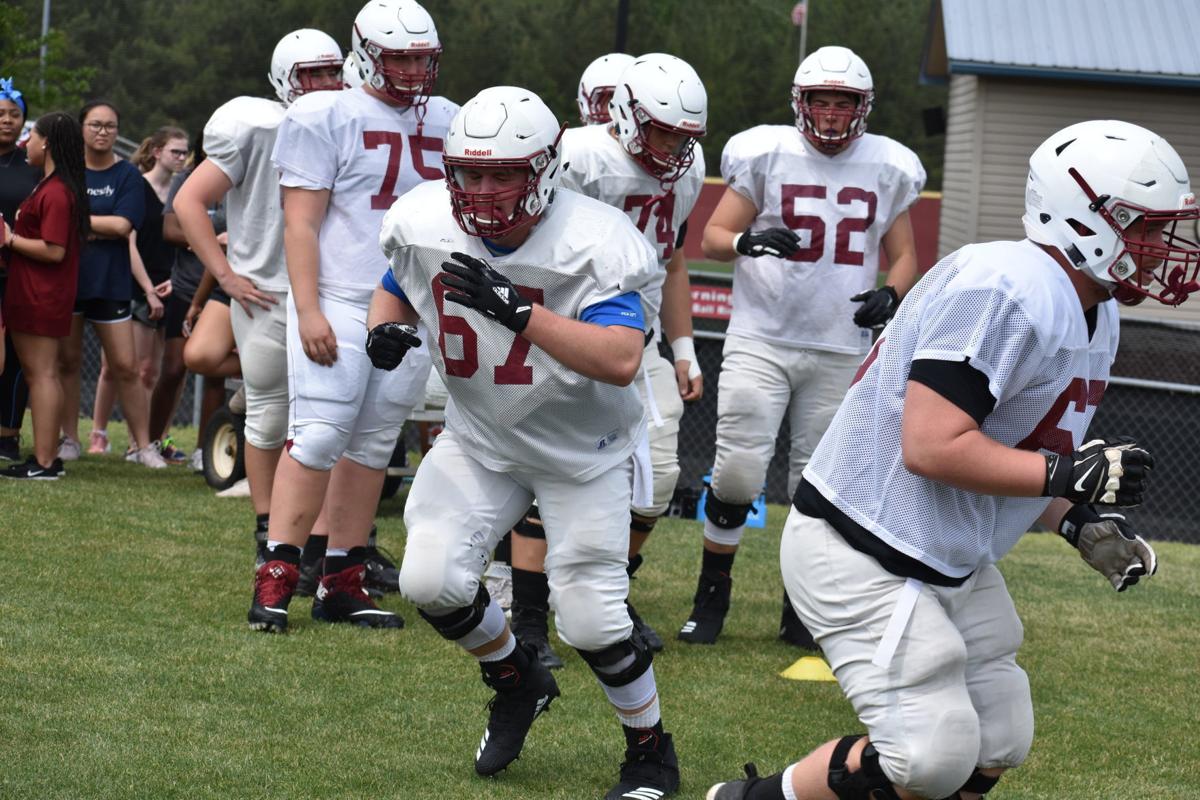 Mill Creek’s Bryce Hancock (67) walks off the field during the Hawks’ preseason scrimmage with Brookwood.

Mill Creek’s Bryce Hancock (67) lines up before a snap in a preseason scrimmage with Brookwood.

Mill Creek’s Bryce Hancock (67) and his fellow linemen listen to their coaches during a break at this year’s preseason scrimmage with Brookwood.

Bryce Hancock jogs across the field during Mill Creek’s Kickoff at the Creek this year.

After elementary and middle school, where individual students have no clue how their GPA ranks among their peers, class rankings create a buzz. The decision of whether high-schoolers share where they stand is up to the students, but inevitably some begin to chatter and compare.

“In ninth grade, I always was trying to be the best student I could be and to do the best I can,” the Mill Creek senior said. “But then I got my report card back second semester and I was ranked one. At that point, I was like, ‘I’ve got to get this. I want to get this.’ I’m a very competitive person by nature. I just thought that would be a great goal and aim to be the best. So far I’ve maintained it.”

His freshman GPA was boosted by two Advanced Placement classes, statistics and human geography. His AP load has grown from there — he expects to finish high school with 15 AP classes — and his weighted GPA has kept him ranked first in Mill Creek’s large senior class of 862 students.

The senior’s balance of that academic success with high-level production in football is even more impressive to those around him. The 6-foot-2, 270-pounder is a two-year starter on the offensive line and a college prospect in his favorite sport.

He also is on track for a little history within the program — he can be the first Mill Creek football player to be valedictorian, a goal he told his coaches about the spring of his freshman year.

“When Bryce first told me, you could sense with him it was more of a statement than a goal. I felt he believed it was going to be fact,” said Mill Creek athletic and activities director Shannon Jarvis, the Hawks’ head football coach until this year. “It wasn’t really until I got to know him over the course of the next year that I realized how realistic that opportunity would be for him. He’s a very intelligent young man. And as much as he gets labeled for his intelligence, people don’t get to see how hard-working and determined he is. That’s something we got to see in the weight room and in the practice field. Combine that with his intelligence, and those kids are going to be really successful in life.”

Hancock’s academic goals didn’t allow for his football weight training class, so he did that lifting outside of his class schedule earlier in his high school career. Instead, he stacked his schedule and rarely took classes that weren’t AP. As a junior, he had five AP classes, including BC calculus, and the only non-AP class was Spanish III. His career goals are in statistics and finance because he excels in math, the subject his mother Sabrina teaches at Mill Creek. She was the Hawks’ 2018-19 Teacher of the Year.

When he isn’t in class or in football activities, Hancock is part of the Gwinnett Student Leadership Team, National Honor Society and Math Honor Society. He also is co-president of Talon, Mill Creek’s leadership council. He spends his lunch break with the school’s RISE Program, tutoring other students.

It isn’t surprising to see a group of football players huddled around Hancock, getting math help in RISE.

“I like his leadership,” said Mill Creek head coach Josh Lovelady, who previously was Hancock’s offensive line coach. “He was a quiet kid, so probably the biggest thing I’ve seen with him is his growth in leadership. One issue you have with kids that are high academic, a lot of times they’re not in the same classes with their teammates. They’re in an AP class. In his classes, he has a set of friends. To be part of our leadership group here, normally you have somebody in your history class and they’re study partners. He does’t have a lot of (football players) as study partners. But he would go into our RISE Program and volunteer every day as a tutor.”

Hancock’s football intelligence also impacted the program. Before the 2018 season, when Hancock was the starter at center, the Mill Creek quarterback called out combo blocks. Hancock picked up the calls so quickly that the coaches turned that duty over to him, which also sped up the offense.

“As far as him being an offensive lineman here at Mill Creek, not that the position has to be tougher than others, but it’s tough to get on the field,” Lovelady said. “He had to earn it. It wasn’t his grades that earned his playing time. It was his play and him being tough and using his intelligence on the field, too.”

College football is an option for Hancock, too. But only if the fit is right. He has a strong interest in Ivy League schools and the military service academies if football was involved. He has a massive list of college opportunities and even could stay local because the University of Georgia automatically accepts valedictorians into its Honors Program.

In short, football won’t dictate his college choice. Unless the right college offers the right fit for both.

“College football would be great and amazing if it works out,” said Hancock, whose older sister went to Rice University on a music scholarship and now plays the oboe professionally for the San Antonio Symphony. “I’m looking for something very specific in a college. If I play football, it has to be somewhere to accommodate me academically. I’m not sacrificing my standards for football.”

The same could be said for high school. Hancock never put football above academics, and his coaches are thrilled that he has a chance to be the program’s first valedictorian.

“It’s really neat,” Lovelady said. “I’ve been here since we’ve opened up and for 15 years we’ve had a lot of kids in the top 10 (academically), but to be No. 1 and to be the first is neat. … It took 15 years to find a kid to do it with the rigor that Mill Creek has. It’s tough. To have that kind of rigor and be able to balance what I know he has to go through football wise, the amount of hours he has to put in, is impressive.”