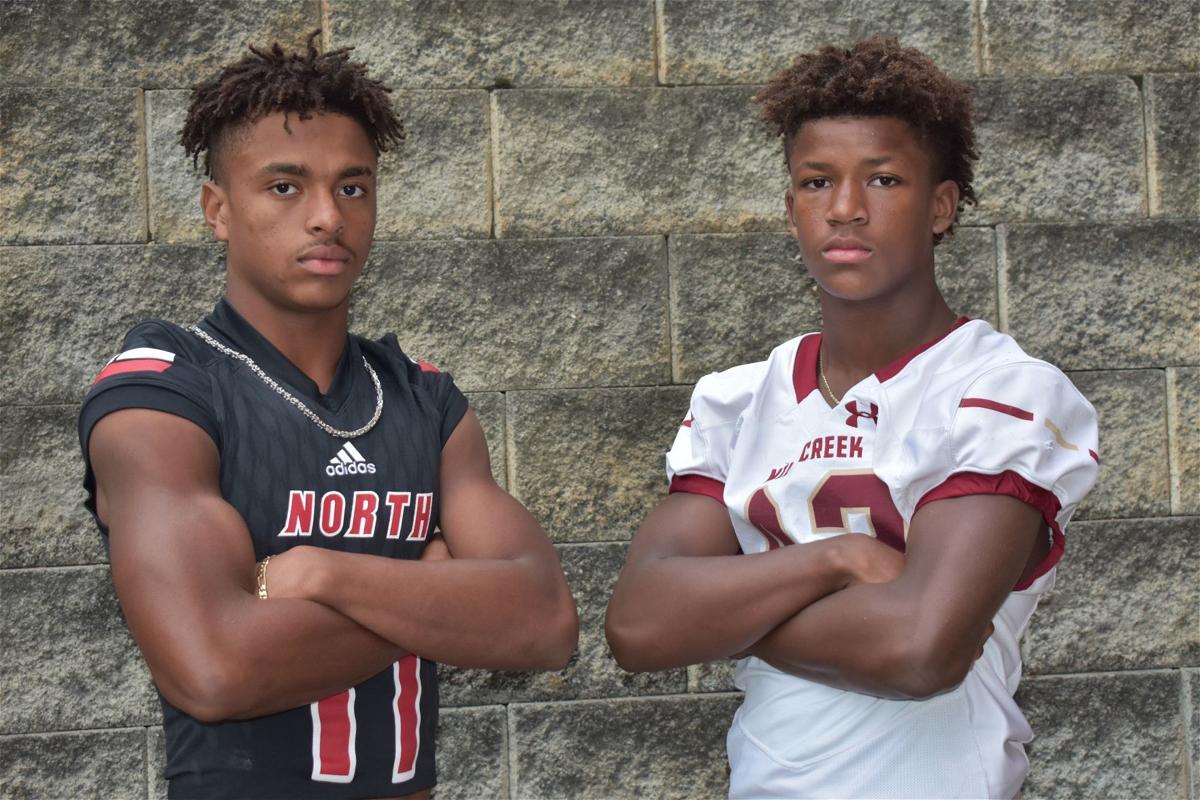 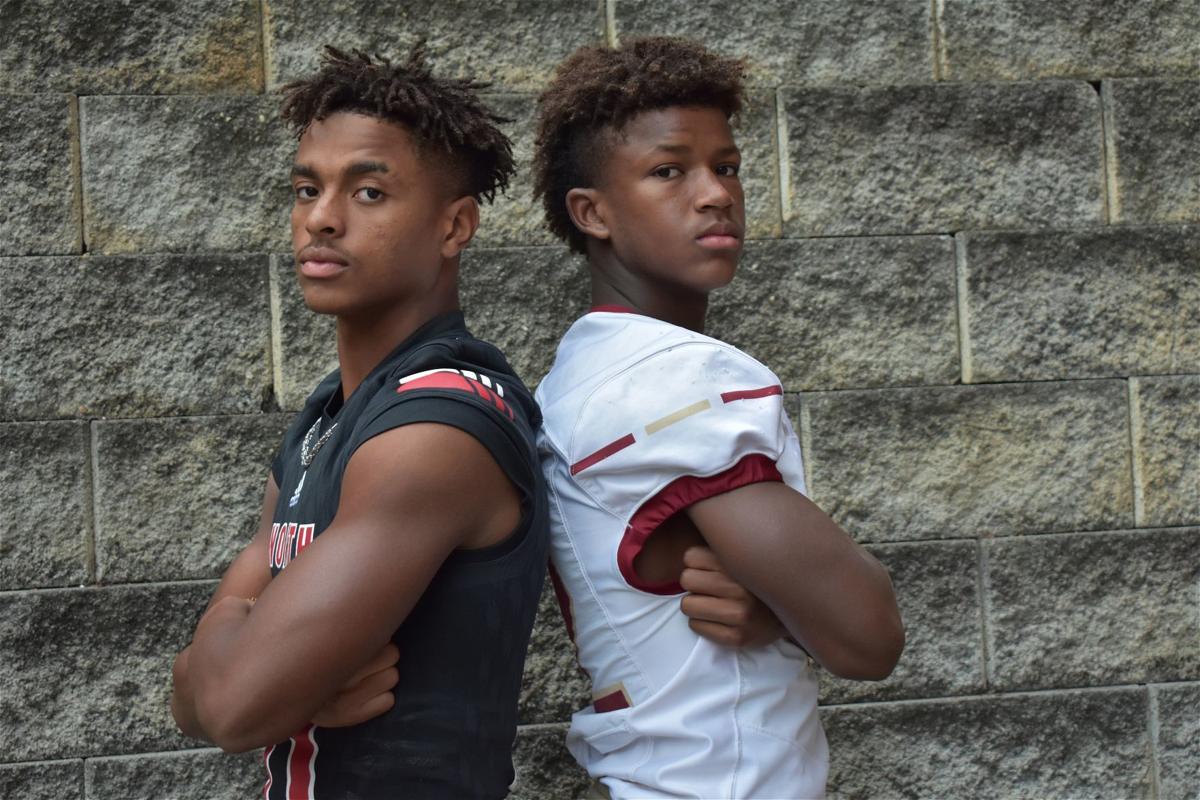 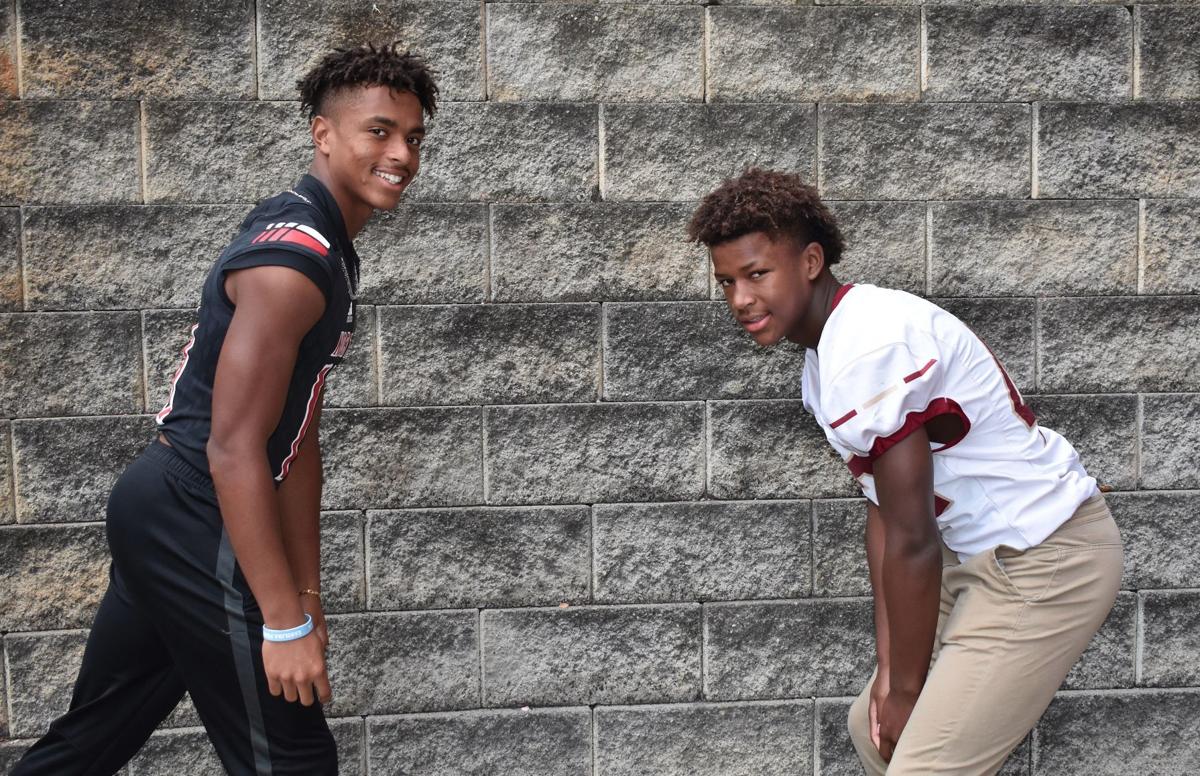 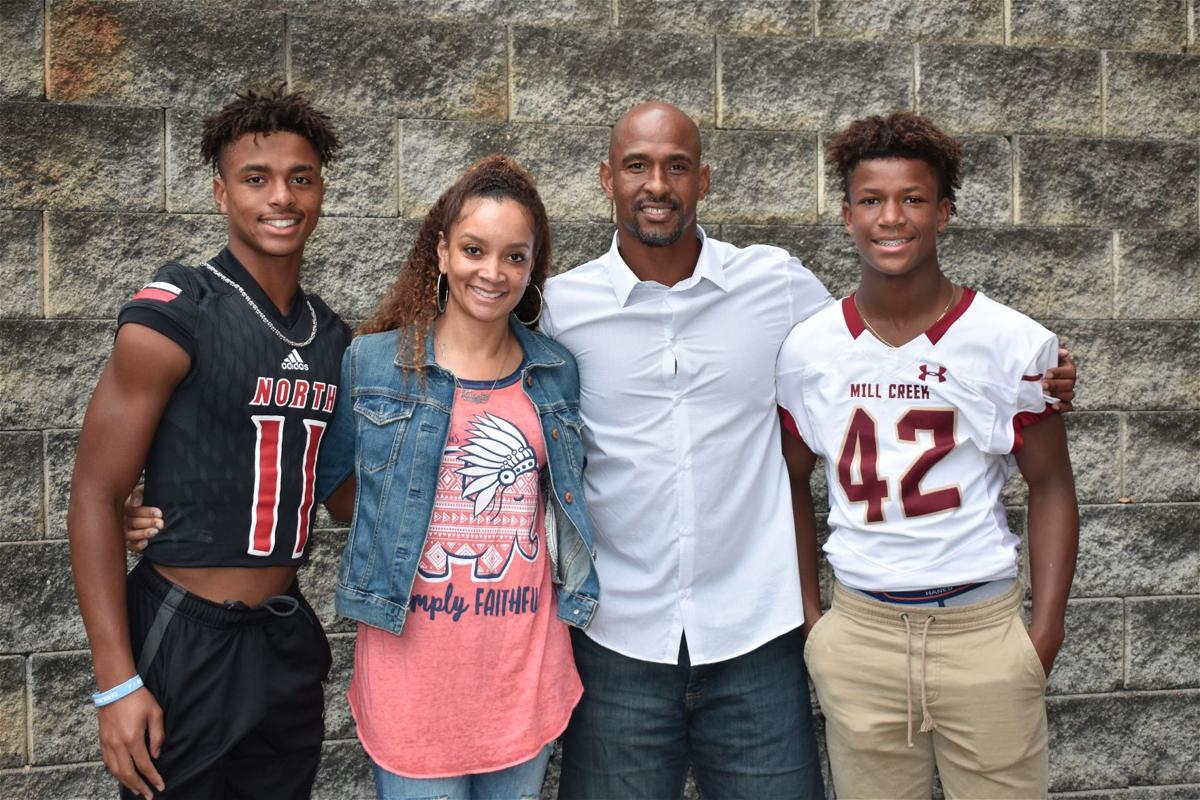 North Gwinnett wide receiver Josh Downs, left, and his younger brother, Mill Creek safety Caleb Downs, right, will play each other Friday night in Hoschton. The brothers are pictured with their parents, Tanya and Gary Downs. 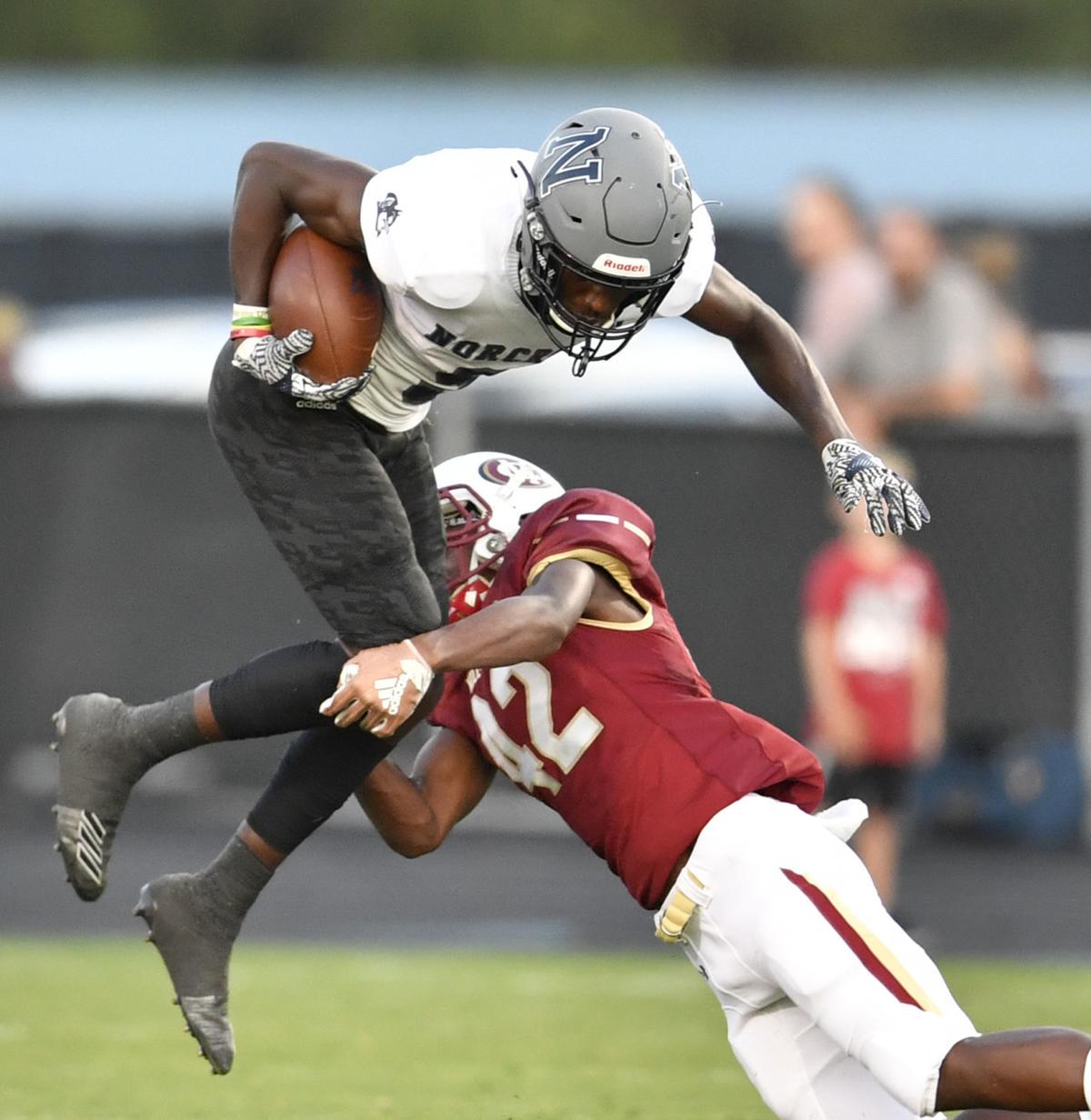 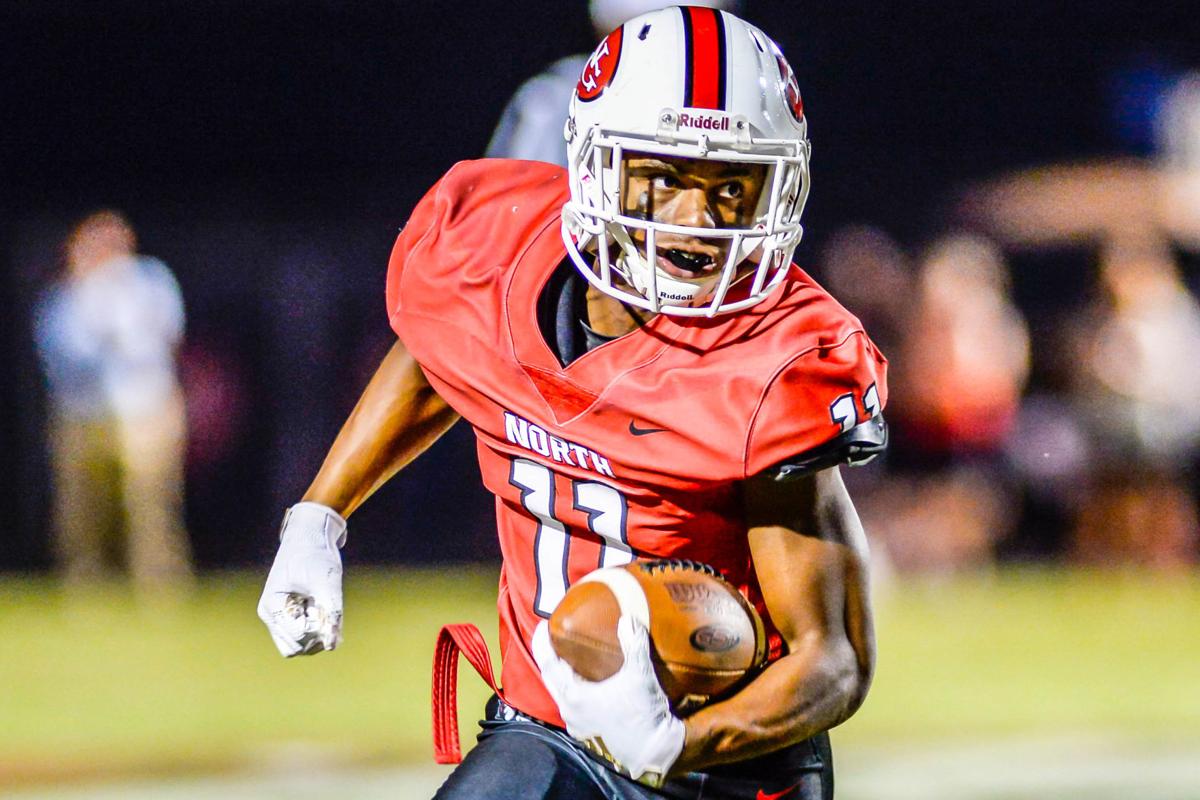 North Gwinnett wide receiver Josh Downs, left, and his younger brother, Mill Creek safety Caleb Downs, right, will play each other Friday night in Hoschton. The brothers are pictured with their parents, Tanya and Gary Downs.

Ever the vocal big brother, Josh Downs’ jabs at his younger brother Caleb are frequent.

Those barbs this football season have been more pointed, coming to a head this week, a big one in the Downs household. Downs, a senior wide receiver, and his North Gwinnett Bulldogs travel to Hoschton for a Friday game with Mill Creek, whose secondary features Caleb, already a key varsity player at safety as a freshman. Their matchup is a unique side story in a game featuring two of the state’s top-10 teams, No. 7 North and No. 8 Mill Creek.

The banter has brewed since Caleb started high school at Mill Creek, the family’s home cluster school. Caleb has played with the Hawks’ Gwinnett Football League youth teams since he was 9, and both played youth football for Peachtree Ridge before Josh went to North for high school.

“I’ve been talking trash for the past few weeks,” Josh said. “He’s been hearing it from me. He’s ready and I’m ready. But I think we’re going to get him on Friday.”

The smack talk is nothing new for the Downs family, which also includes older sister Kameron, a Peachtree Ridge grad and a current soccer player at Kennesaw State.

“(Josh) does talk, and (Caleb’s) used to it,” their mother Tanya said. “He’s more the silent one. He doesn’t need to talk trash. He’s like, ‘Okay, we’ll just see on the field.’ It’s going to be like it always is this week. Even if this game wasn’t coming up, he still talks junk to him all the time, a big brother thing. It will be the same as it always.”

Caleb expects the talking to continue to the field Friday night.

“(Josh) will definitely talk trash in the game,” Caleb said. “As he does to everyone, he will talk trash.”

His younger brother may be the target given the circumstances.

“(Caleb’s) playing safety and I’m playing the slot, so he’s going to be lined up against me eventually,” Josh said.

Both brothers said they won’t see a family member on the other side of the ball once the game gets going.

Most of North’s opponents have struggled to defend Josh, a commitment to the North Carolina Tar Heels since February. The 5-foot-10, 170-pounder entered this season with 89 career catches for 1,533 yards and 18 touchdowns, including 37 receptions for 624 yards and nine scores as a junior.

He has seven receiving TDs already through six games this season, along with throwing a game-winning TD pass in the second overtime of a win over Florida power Armwood. He had 13 catches in that victory, and had two TDs each in wins over Walton, Norcross and Discovery.

“The big games he’s shown up,” North head coach Bill Stewart said of Josh. “He’s a gamer. He’s a competitor. He’s been working himself hard to be the best.”

That Josh is on the varsity field as a freshman in difficult Region 6-AAAAAAA is a surprise to some, but he has been one of the top players in his age group since he began playing in the GFL as a 6-year-old. He didn’t want to play football until his family steered him that way, following the path of Josh and their father Gary, a former All-ACC player at North Carolina State who played seven NFL seasons, including on the Falcons’ 1998 Super Bowl team.

“I didn’t want to be anything like (Josh) when I was younger,” Caleb said. “When he started playing football, it was like, ‘No, I’m not doing that.’”

However, he loved the sport immediately, thanks to the success he had — a GFL record for TDs in a season as a 6-year-old — and a promise from the coach that he could play quarterback.

“(Caleb) came out during the first couple of weeks of camp and nobody could tackle him,” said Gary, a longtime football coach who has been running backs coach and recruiting coordinator for East Tennessee State University the past five seasons. “The coaches wondered whether that was real what they were seeing. They ran the jamboree and he didn’t get tackled. The first couple of games he didn’t get tackled. Josh was rooting for (the other team), ‘Get him, y’all tackle him.’ The rumor was he never got tackled that whole season as a 6-year-old in the GFL.”

Caleb’s offensive ability eventually will be on display at Mill Creek. But the Hawks needed him more in the secondary this season, particularly with some injury issues at safety. The ninth-grader hasn’t disappointed, making 22 tackles (20 solos, two for losses) and intercepting two passes.

“Caleb’s biggest asset is his coachability,” Mill Creek head coach Josh Lovelady said. “He wants to learn. He’s always asking questions. Obviously, as a ninth-grader, you’ve got to do some physical stuff that the older kids do (to be able to play). But the biggest thing is his coachability and his ability to correct himself. … He could play both sides of the ball for us, but we decided where he fit best for this team was in the secondary. Being a freshman, the curve going from eighth grade to varsity is such a big jump, we didn’t want to overwhelm him.”

Caleb’s recent growth has made varsity football an option, and put him on an equal playing field with Josh. They are slightly different players — Josh has been more of a receiver, while Caleb has been a running back/linebacker/safety — but have enjoyed the same level of success.

“When they were younger, obviously Josh was bigger, stronger and faster, so they really didn’t compete against each other,” Gary said. “About two years ago, Caleb was able to start training with Josh. The last two years in the offseason they could start training, but Josh was still quicker and stronger. This year has really been the first year that Caleb athletically could just train with him face to face. He’s grown. He’s obviously stronger.”

While Caleb has been bigger for his age than Josh ever was, he appreciates the way his older brother plays.

“(Josh) was an inspiration to me because he was small and he had a lot of fight in him when he played,” Caleb said.

“(Caleb) was always a good player,” Josh said. “His first year playing GFL he had like 60 touchdowns. He’s always been a great player to watch on offense and defense.”

The brothers won’t get to watch each other much this season because they play on rival teams on the same nights. That changes this week, creating an interesting dynamic for the family.

“It’s definitely been nerve racking for me,” Tanya said. “My boys are going against each other and Caleb’s still my baby. I joked with Coach Lovelady, ‘If you want to sit Caleb out of this one, I’ll be good with it.’ I’ve already tried to get Josh to fake an injury and that didn’t work. So I guess they’ll be playing. I don’t know where I’m going to sit or who I’m going to cheer for. If they’ll let me sit in the middle of the field, I’ll do that if I can. It’s very nerve racking for me.”

Gary, because East Tennessee State has a Saturday off, can attend the game with his wife. Regardless of who wins, the family expects a memorable night.

“I’ve always joked that they’re such good competitors, both alpha personalities, that they needed to be on opposite sides of the country, one on the East Coast, and one on the West Coast,” Gary said. “One is playing at North and one is playing at Mill Creek, and I think it gives them both the opportunity to shine. That’s one of the reasons why I felt like Caleb needed his own show. He didn’t need to be Josh’s little brother showing up because he can hold his own. Playing at a different school has given him an opportunity to do his own thing and sort of carve out his own niche.

“And playing against each other, obviously they’ve thought about it. But really that’s not the defining moment, it’s just interesting to see. And the fact that Caleb’s playing safety and Josh is playing receiver, they could match up against each other. They’re both fairly competitive. But I don’t think they’ll be thinking much about being brothers out there on the field.”