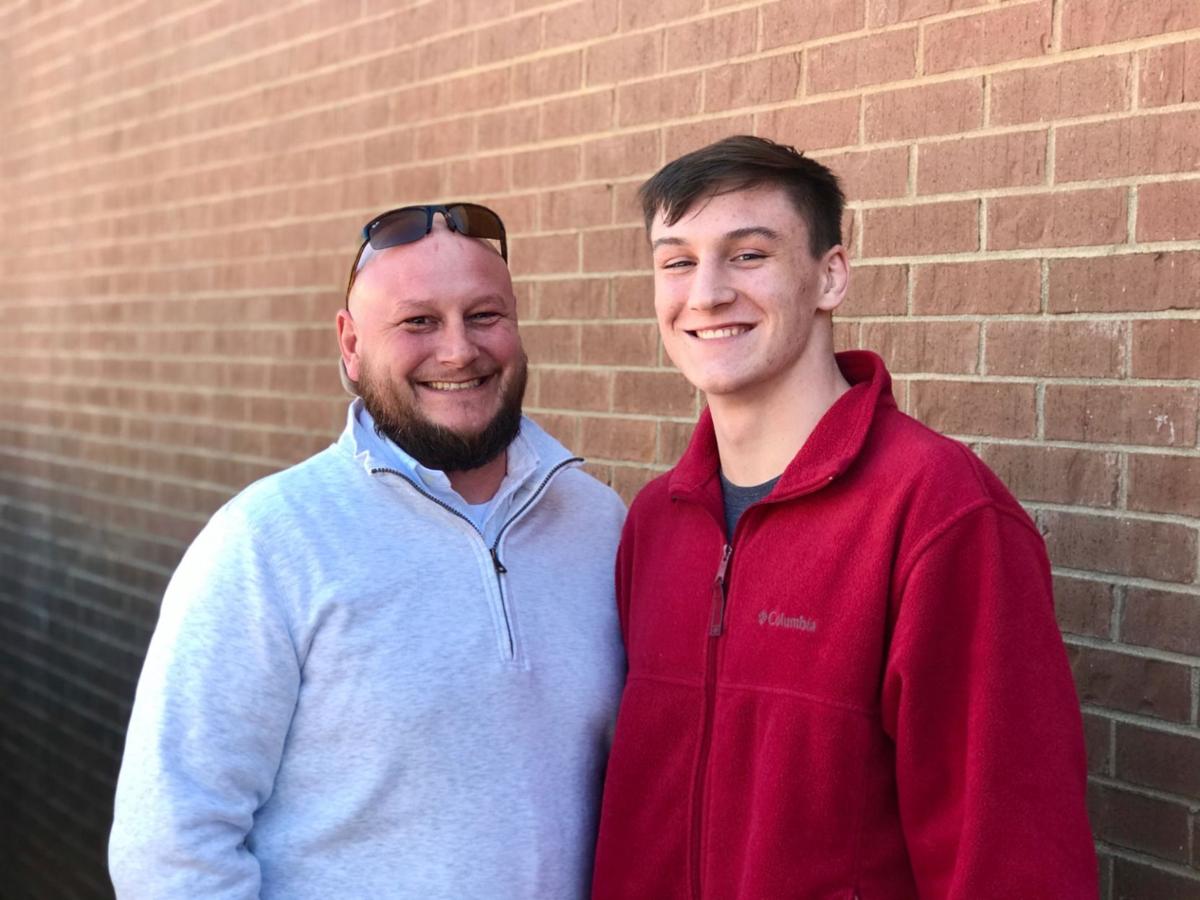 Brookwood senior Chase Hornsby, right, poses for a photo with his father, Justin Hornsby. Chase won a state wrestling championship this season, matching the feat of Justin, who was a state champion wrestler at Brookwood in 1995. 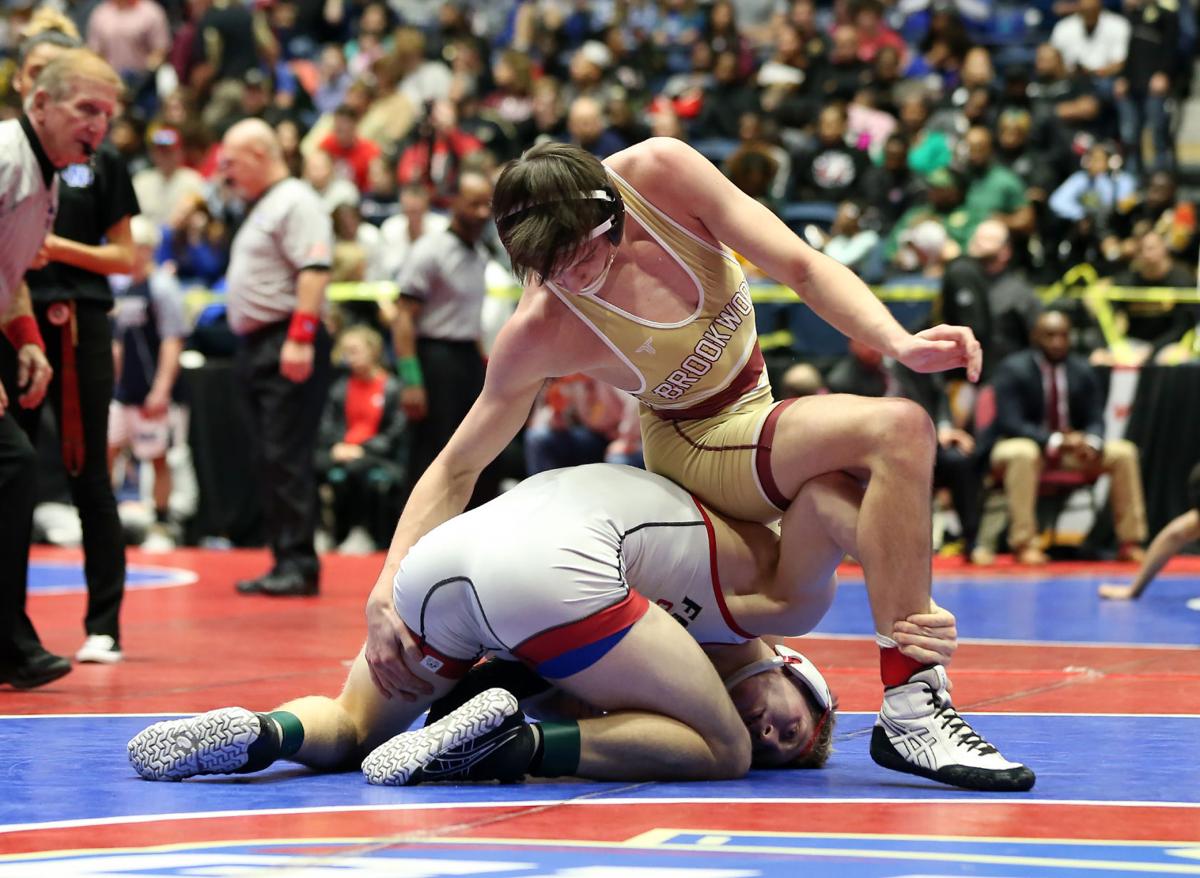 Brookwood senior Chase Hornsby, right, poses for a photo with his father, Justin Hornsby. Chase won a state wrestling championship this season, matching the feat of Justin, who was a state champion wrestler at Brookwood in 1995.

Motivation from seeing past state champions’ names on the wall are staples of wrestling rooms across the country. The list at Brookwood was a little more personal for Chase Hornsby.

At every training session in the room above the Broncos’ old gym, Hornsby saw his father’s name, Justin Hornsby, who won state in 1995. He made it a goal to join his father as a state champion, and accomplished that feat as a senior in 2020.

The victory was satisfying for that reason, in addition to avenging a runner-up finish at state in 2019.

“It’s very special because I haven’t heard of any Georgia father-son duos in the state that I know of (to be state champions),” Brookwood head coach Chris Cicora said. “I’m not a Georgia wrestling guy. I guess I am now, but I didn’t grow up here. There probably is someone out there, but it’s very rare. I think of their family and their dedication to wrestling. It’s demanding. It’s a tough sport. It takes a lot of time on the weekends during the season and in the offseason. It’s not always appealing to some parents.

“In the end, you see the result for the kids. The toughness it builds, how it builds self-confidence, it develops them into young men. That’s what we’re all about at Brookwood. It’s been the base line of our success. We take pride in it. The perfect example is Chase.

“His senior year there’s a lot of added pressure not only coming off a runner-up finish, but as a senior the expectations are greater. Now all of sudden you’re expected to win it. Now I’ve got the added pressure that I don’t have a second chance if I don’t. And I’ve got the added pressure that my dad’s name’s on the wall. Chase will be the first to tell you he noticed that name up there all the time. It adds a little pressure. We talked about it. But Chase is an intelligent kid and he’s willing to embrace some of those psychological barriers and overcome them.”

Hornsby’s state championship adds another piece to his family’s wrestling history, which began with his grandfather, David Hornsby, a former Ohio wrestler who also wrestled when he served in the Army. He started Brookwood’s youth wrestling club in the early 1980s, shortly after the high school opened. Justin Hornsby revived the Broncos’ youth program in 2004, creating an avenue to Chase’s wrestling career.

When they were young, both Justin and Chase kept working at the sport despite a lack of early success in a program run by their fathers.

“In youth wrestling, I wasn’t very good,” Justin said. “I wasn’t really competitive until I got to high school.”

His son followed the same path.

“I definitely wasn’t very good when I was little,” Chase said. “We had that in common. It was the same thing with me freshman year as it was with him. I just wanted to get on varsity. I just wanted to make it to state.”

The state championship expectations ramped up as Chase’s high school career progressed. He went a combined 3-4 at state his first two Brookwood seasons before taking second at 160 as a junior. At that point, the thought of possibly joining his father as a state champion became more realistic for Chase.

“You could see the stress in (Chase) the last couple of years, wanting to get on the wall, win state, make the finals,” Justin said. “Just making the finals is hard enough and to make the finals twice is big. He wanted it. That’s the big thing when the kids decide to focus on it and do it themselves. … He has a great work ethic. He has a drive to be successful. That’s what all the coaches always tell me, that he’s one of the most driven people they’ve seen.”

Chase’s final high school match was a thriller. He trailed 4-2 late and picked up a stalling point with 30 seconds left to get within 4-3. He turned his opponent, Forsyth Central’s Avery Krippner, for a 5-4 advantage and tacked on two more points for a 7-4 victory.

The magnitude of the moment didn’t send him into a frenzy, though.

“When he won the state championship in the fashion he did it in, coming back in the third period, is a testament to all of his hard work and all his competing and being the leader of the pack in our drills, our sprints, everything,” Cicora said. “What’s special is he didn’t jump up and celebrate, rub it in his opponent’s face or get overly excited. He embraced his opponent immediately. He respects him because he was there the year before (as state runner-up). He knew how it felt.”

The victory was even more rewarding because Chase was 13 pounds light of the weight limit on finals day, but he made it a point not to go over the top with his celebration.

“I felt horrible for the other guy because I’ve been in that position before,” Chase said. “I know his pain. I told him, ‘Good job, you’ll be fine next year. Don’t worry about it.’”

More time has allowed Chase to appreciate his accomplishments, including his spot in his family’s wrestling tradition. He matched his father with a state championship, and finished his career with more than 200 victories, breaking the school record.

“I was overjoyed with excitement for him because he’s worked so hard to get there,” Justin said of his son. “He was just laser focused this year trying to get those goals.”