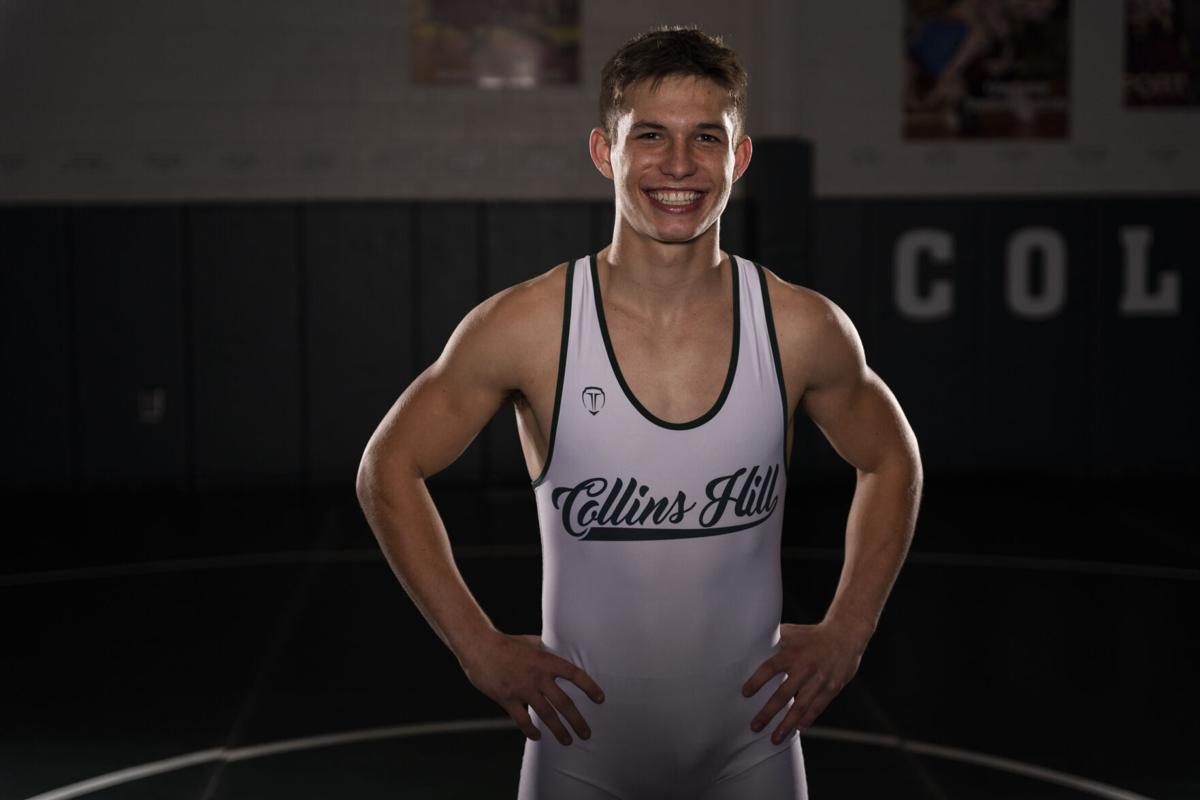 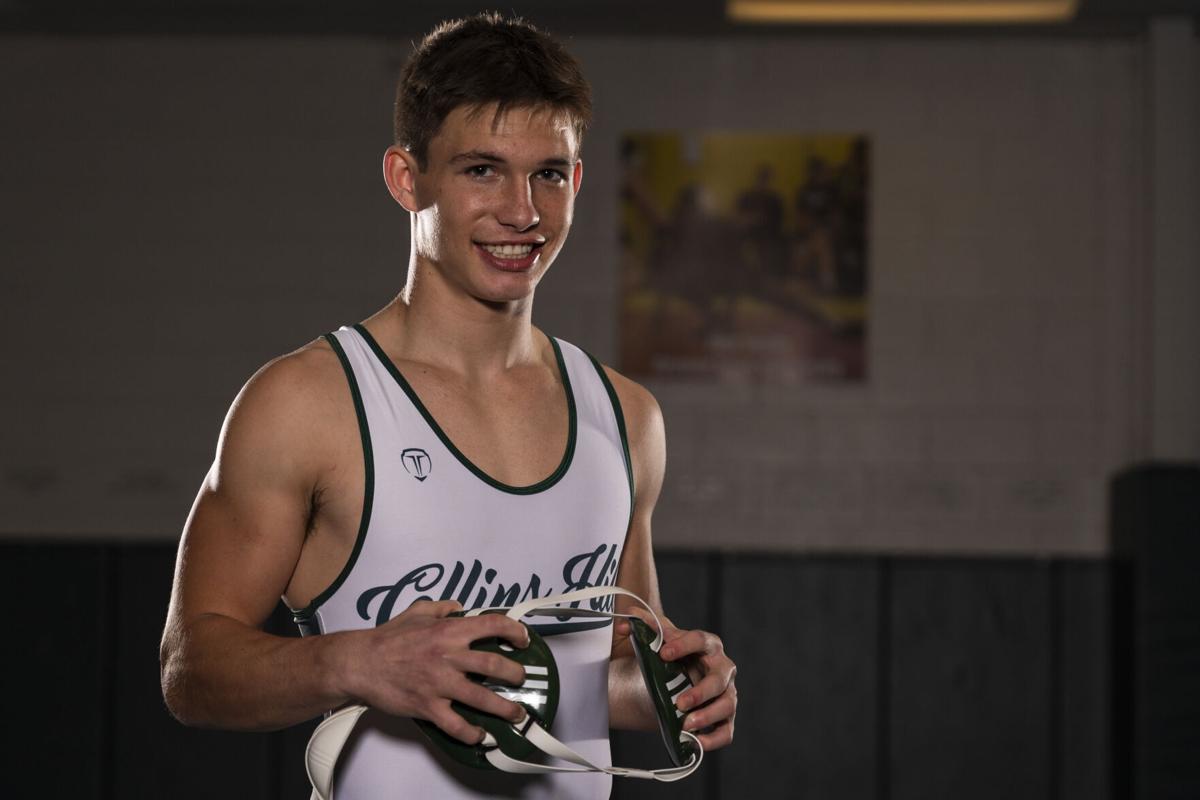 As a member of Collins Hill’s football and wrestling teams, it is quite common for Clint Gilbert to get a bit of a late start to the season in the latter each year because of overlaps with the season of the former.

But the 2020-21 wrestling season saw a far longer delay in the transition between the two seasons for the for the senior thanks to a back injury sustained while on the gridiron late in the Eagles’ Class AAAAAAA state runner-up season.

The recovery time limited Gilbert to just 13 total matches this past season, though the 2021 Daily Post Wrestler of the Year admits that the toughest part of his comeback trail this season was more the mental side than the physical.

“It was very difficult,” Gilbert said. “I’d lost a lot of my knowledge because it just felt weird not being in the (wrestling) room that long. It was actually five weeks. It really makes a difference.”

Gilbert made the most of his recovery — both mental and physical — however, winning all 13 of his matches, 11 of which came by pinfall, plus another by technical fall and another by major decision.

And his strong run came at the right time, with another region championship and his third Class AAAAAAA state title in his four high school seasons with an 8-4 decision over Camden County’s Anthony Doyle in the finals at the GHSA State Traditional meet Feb. 6 at the Macon Centreplex.

Even so, Millhof, a 2014 Collins Hill grad and former Eagles mat standout himself, wasn’t going to leave anything to chance, and took a hands-on approach to helping Gilbert realize his full potential in his senior season.

“Clint’s a tough kid,” said Millhof – like Gilbert, a three-time state champion and four-time state finalist. “He’s an extremely tough kid. He’s got a good head on his shoulders, and the thing that separates Clint is that he knows what it takes to be a champ. So with two weeks left going into state, he was able to hop back in and I told him, ‘You’re wrestling me every day (in practice),’ and we got after it. He put in the extra time he needed to.

“The main conversation was, ‘Don’t focus on what you didn’t have (this season). Focus on what you do have. You didn’t get the whole season, but hey, you’ve got a whole month to wrap up your high school career and go out with a bang.’”

As competitive as Gilbert is, he didn’t really need much from a motivational standpoint to give his best effort.

However, he was also smart enough to realize that when someone with the credentials of Millhof, who went on to a Division I All-American career at Oklahoma and Arizona State that included qualifying for the NCAA Tournament three different times, talks, it’s wise to listen.

“Two weeks before state, I wrestled him in practice every day live and drilling,” Gilbert recalled. “He taught me a lot of things. … I thought I’d learned it all, but he has a lot of (knowledge).

“Just seeing him wrestle through all the different positions (was important). There’s not one thing during a match that you can’t get out of or that you can’t go to after this happens or after that happens. Just keep wrestling throughout the match.”

Just as Millhof hoped, Gilbert took his challenge to heart and ended with a bang a high school career as decorated as that of his mentor, with a final career record of 136-21 and state titles at 106 pounds his freshman season in 2018 and 138 the past two seasons, plus a state runner-up finish at 126 as a junior in 2019.

From Gilbert’s perspective, it was very much worth everything he had to endure, not all of which involved what happened on the mat.

“(One) thing I’m proud of myself for is that I’ve had a different (head) coach (almost every) year — (three out of) four years,” Gilbert said. “So really, I was kind of on my own. Not the whole year because the coaches teach and stuff, but it’s just different when you’ve got (three) different people for four different years.”

Having to process a different voice in the wrestling room almost every year wasn’t the only sacrifice Gilbert had to make during his wrestling career at Collins Hill.

But as he prepares to graduate and head off to Georgia Military College to study and play football, a sport in which he also excelled as a receiver for the Eagles for four years, there is one sacrifice he is most looking forward to not having to make anymore.

“What am I most proud of? Cutting weight,” said Gilbert, who wrestled down a weight class because of his back injury, and hopes to add to the 150 pounds he carried last football season. “There’s a lot that goes into it, and I love to eat. So cutting weight is really hard, and I’ve been doing it for about 12 years. Once you wrestle after cutting weight, you want to eat.”

The Daily Post's selections for the best in Gwinnett high school wrestling from the 2020-21 season.