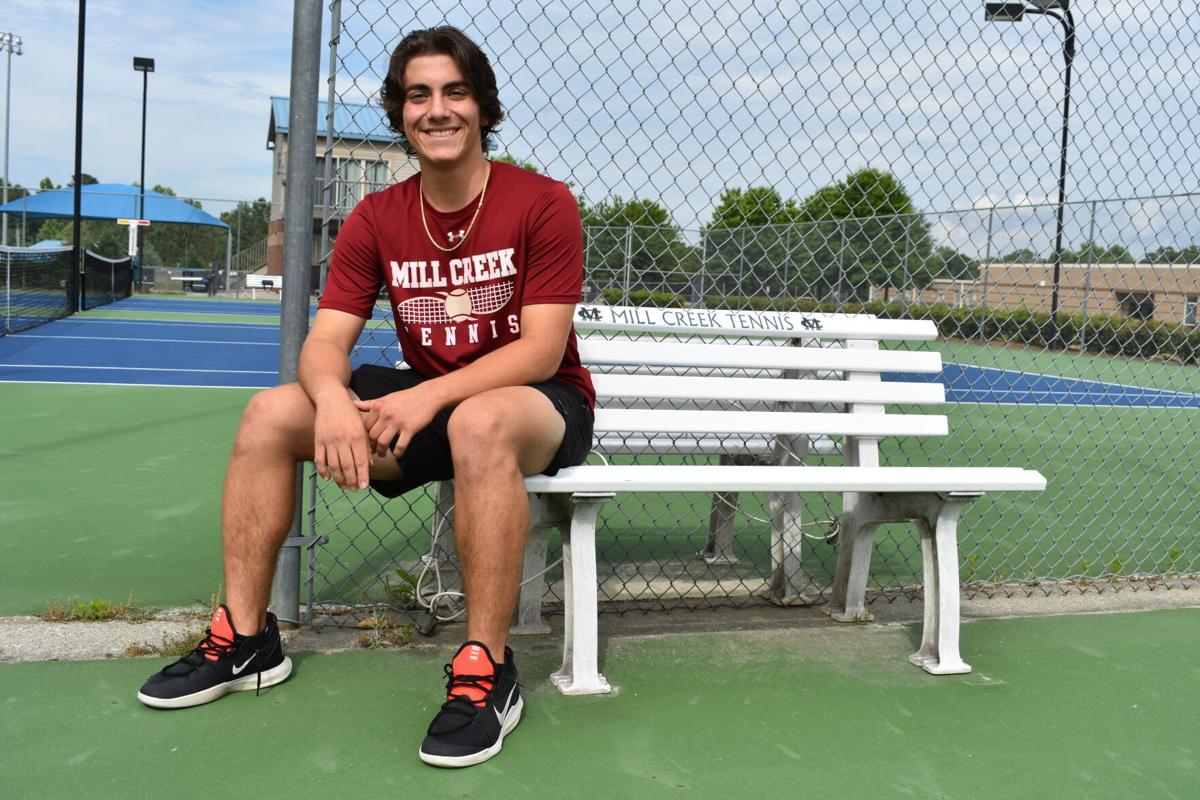 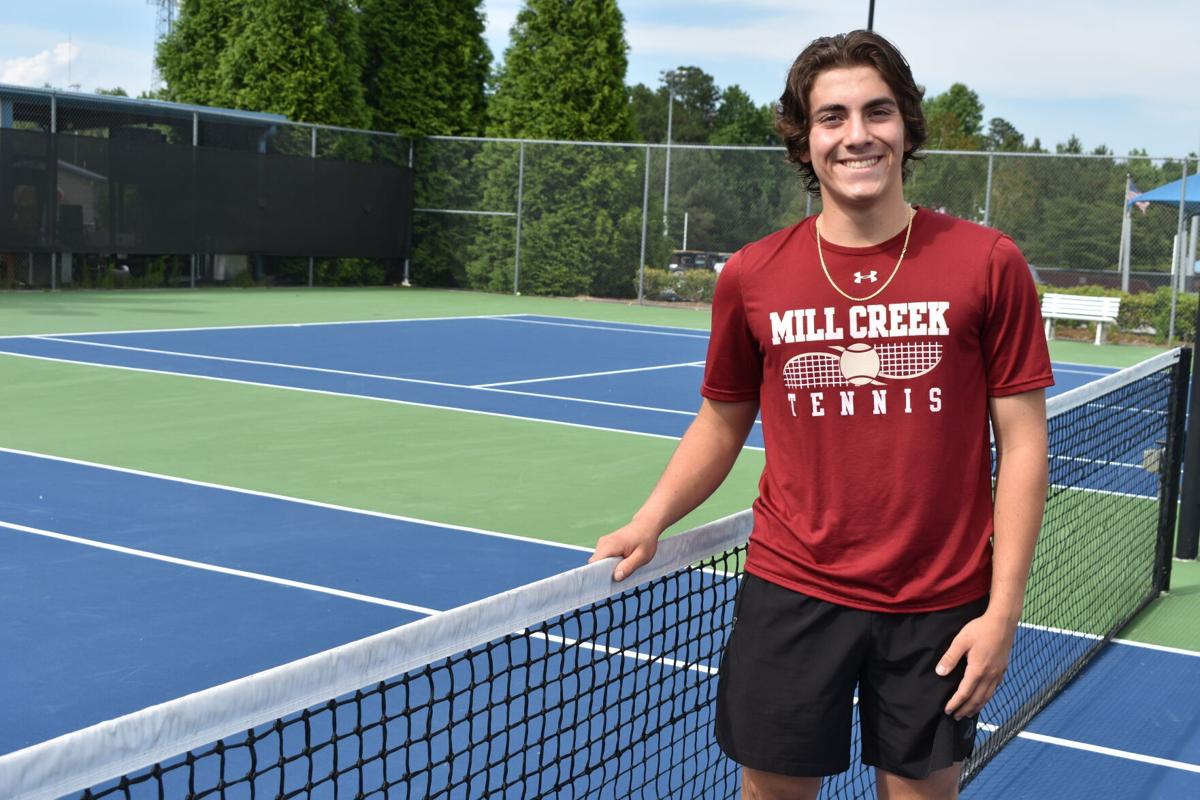 Even the most successful athletes have their share of obstacles to overcome, and Mill Creek’s Andre Izadi is no exception, even in perhaps the best season of his high school career.

And Hawks tennis coach Tim Schroer thinks he knows why the 2021 Daily Post Boys Tennis Player of the Year was constantly able to clear the figurative net.

There’s actually one part of Schroer’s assessment Izadi disagrees with, as he admitted to a little complacency that can sometimes strike high school seniors.

However, he added that an early-season loss in a third-set tiebreaker to Buford’s Dean Kingsley proved to be an effective cure for that “malady.”

“I lost early on in the season at Buford to Dean Kingsley,” Izadi recalled of his 2-6, 6-2, 7-6 (10-4) loss back on Feb. 4. “He’s a great player and I’ve known him for a long time, but that’s not a match I should’ve lost. At that point, I was feeling that senioritis. I’m not going to lie. But I knew that’s not how I wanted to end out my senior year. I didn’t want to be remembered as the guy who fizzled out.

“That loss just relit that fire and that motivation, and I went back and started training hard so I could finish my season strong and make my team proud.”

Even fueled by that determination, Izadi needed a little something extra to overcome another obstacle, one that he’s had to deal with his whole tennis career.

Standing only 5-foot-7 and weighing just 160 pounds, Izadi often finds himself outsized on the court by such talented opponents like Matthew Sloan of North Gwinnett.

And it took more than just physical adjustments for him to find a way to overcome the 2019 Daily Post Player of the Year in their Region 6-AAAAAAA regular season match March 4 at North.

It was perhaps the signature win for Izadi during a 17-3 campaign in 2021 that also included wins over such high-quality opponents as Brookwood’s Tawfeeq Mohamed, Peachtree Ridge’s Sean Aquio and Braxton Wright of Forsyth County powerhouse Lambert.

“I’m only 5-(foot-)7 and 160 (pounds), and (Sloan) has to be about 6-3 or so,” said Izadi, who was also leading Sloan during their match in the Region 8-AAAAAAA tournament finals when North clinched the team title before that match was completed. “I’ve always been the smallest guy, so usually when I see someone bigger on the court, it doesn’t shake me. … That’s been ever since I first started (playing). I’m used to it.

“I pride myself on being a strong mental player. I don’t let that get in my head. I keep my focus. I keep fighting, no matter what, especially in those two matches against Matthew Sloan. He has a larger-paced forehand than me, but I was able to hold my own that day because I had a stronger mental game.”

Schroer isn’t a bit surprised that Izadi has been able to stay focused and not be intimidated by larger, stronger opponents over the years.

It is a quality he has seen from his No. 1 singles player throughout his career at Mill Creek.

“The word that comes to my mind is, ‘grit,’” Schroer said. “He’s such a gritty little player. He’s just got that fight and that not going to quit mentality. He’s probably one of the grittiest little players I’ve ever had in our program. That shows when he’s out there on the court playing.

“I think he’s just a very, very smart kid. He can figure out pretty quick in a match the things he needs to do to make the adjustments he needs to make in order to be successful against his opponent.”

Izadi’s intelligence also has carried over to the classroom, and something he intends to take with him when he attends Georgia Tech to study chemical engineering beginning in the fall.

He hopes to continue his competitive career by walking on with the Yellow Jackets, but while only time will tell if that effort is successful, it won’t be because Izadi didn’t give it his maximum effort.

“As of now, I’m not going to be playing tennis (in college), but that’s certainly the next goal,” Izadi said. “I haven’t reached out to the Georgia Tech’s coach at all (yet). I don’t even know if they accept walk-ons, but I’m going to get in touch with that coach and see if that’s a possibility.

“I was offered some (Division) II and D-III scholarships from various schools around the country, but I turned those down because I chose a better education. … I’ve always been school-first. That’s always been important to my family and to myself. They instilled that value in me. I strive to be the best everywhere. … I’m not the biggest guy, but I’m pretty strong and pretty athletic, and I can handle it. I’ve been training hard and working out in the gym, and I’ve feel like I can go to that next level.”