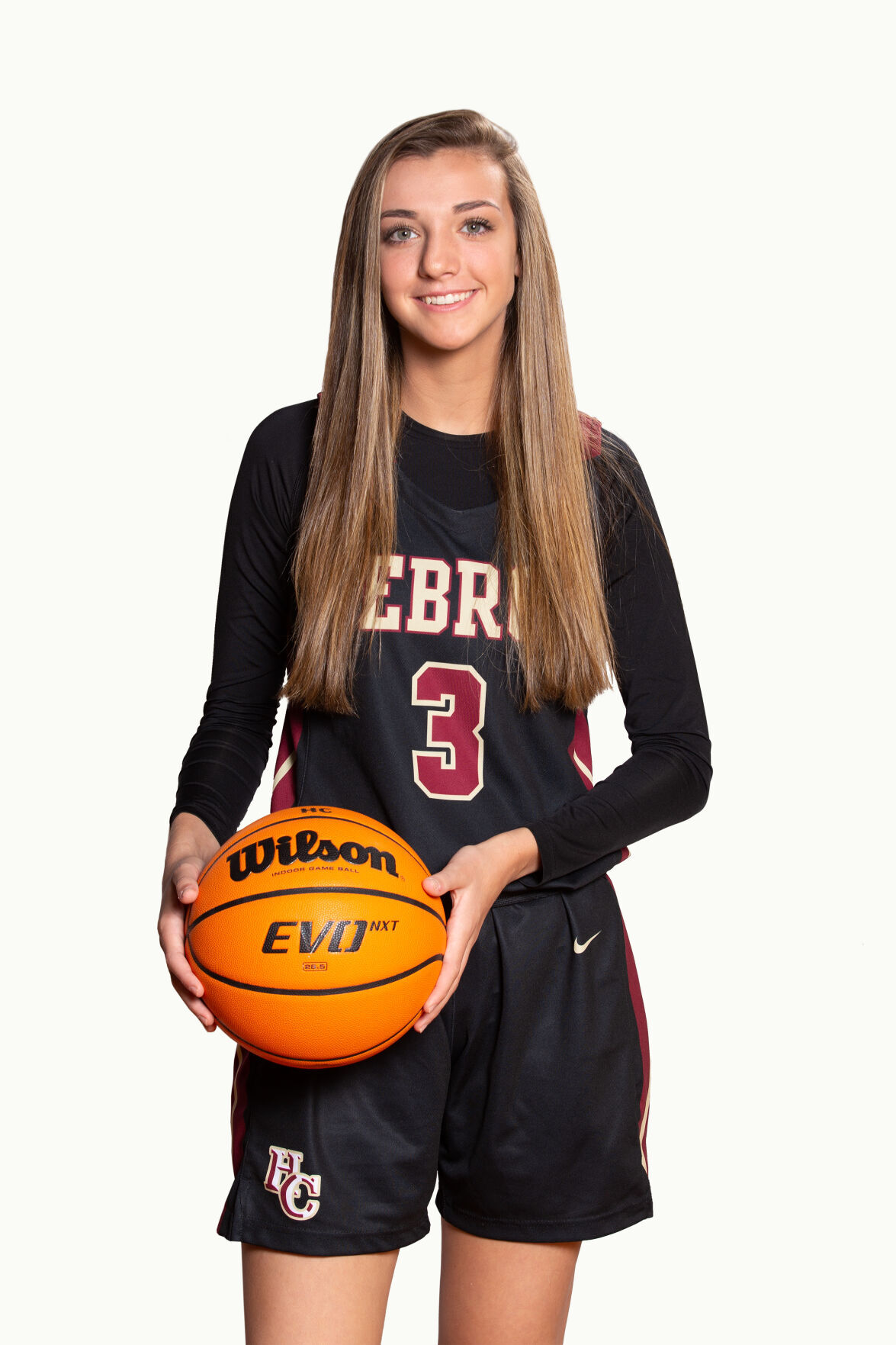 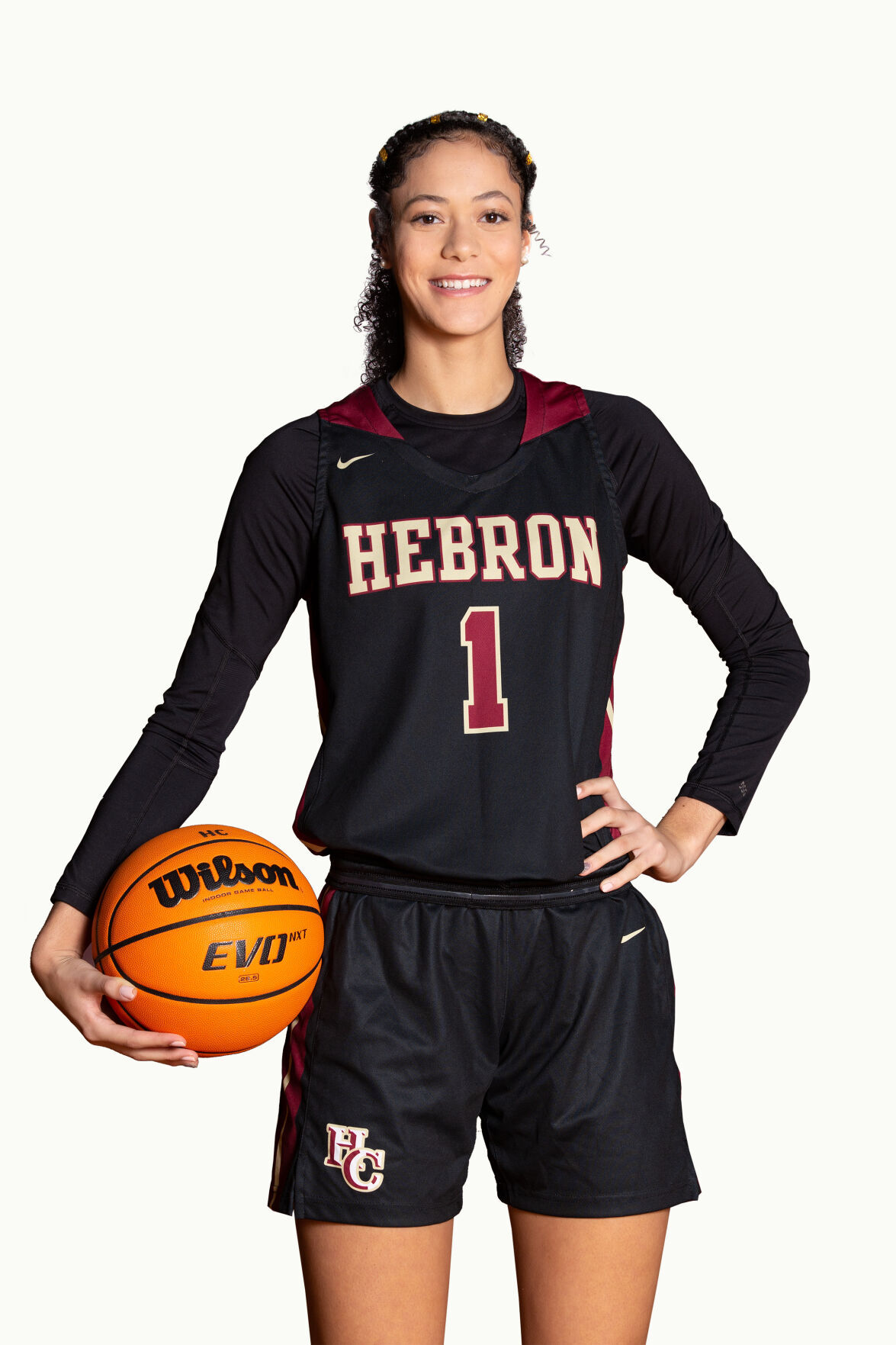 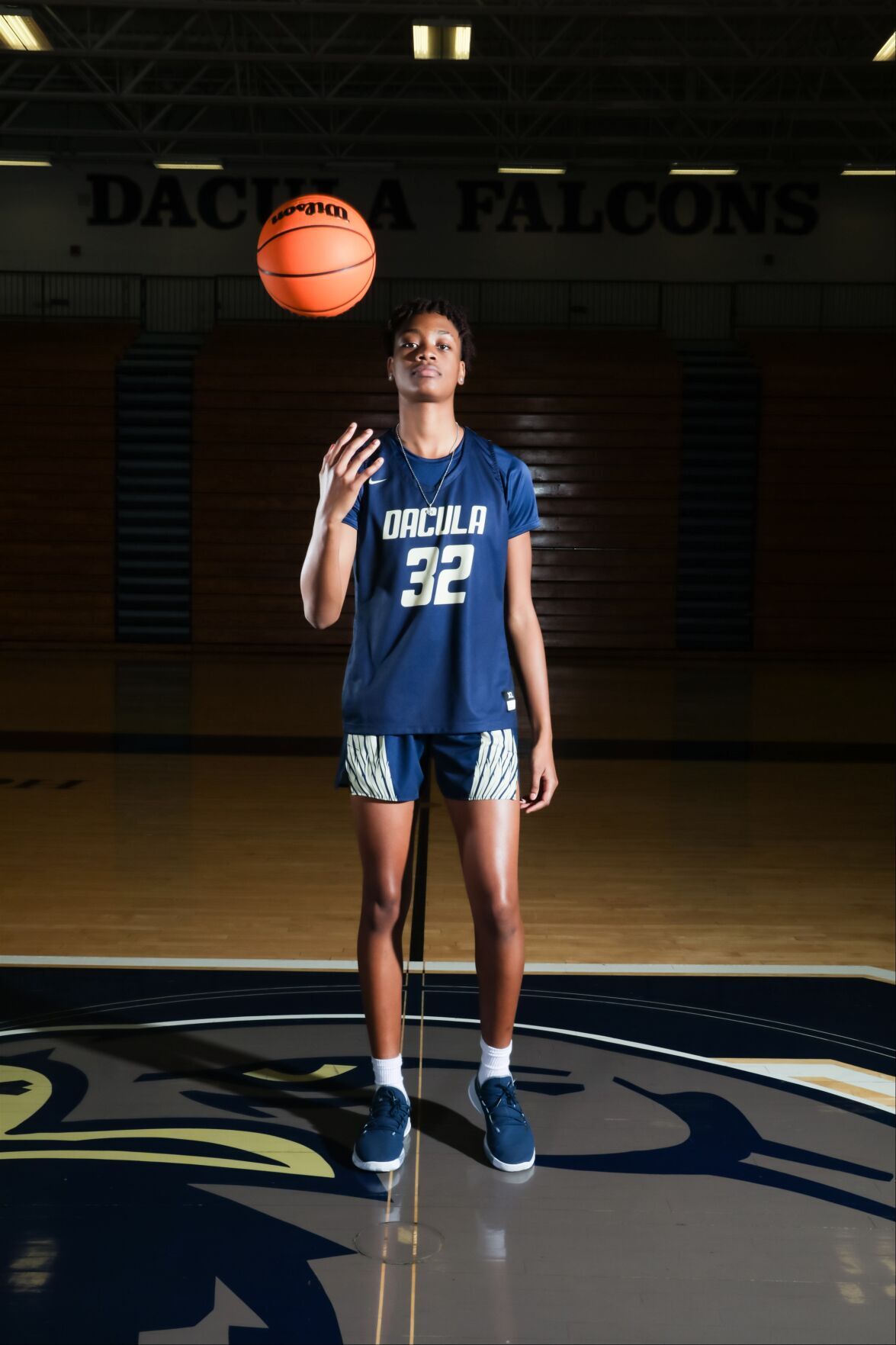 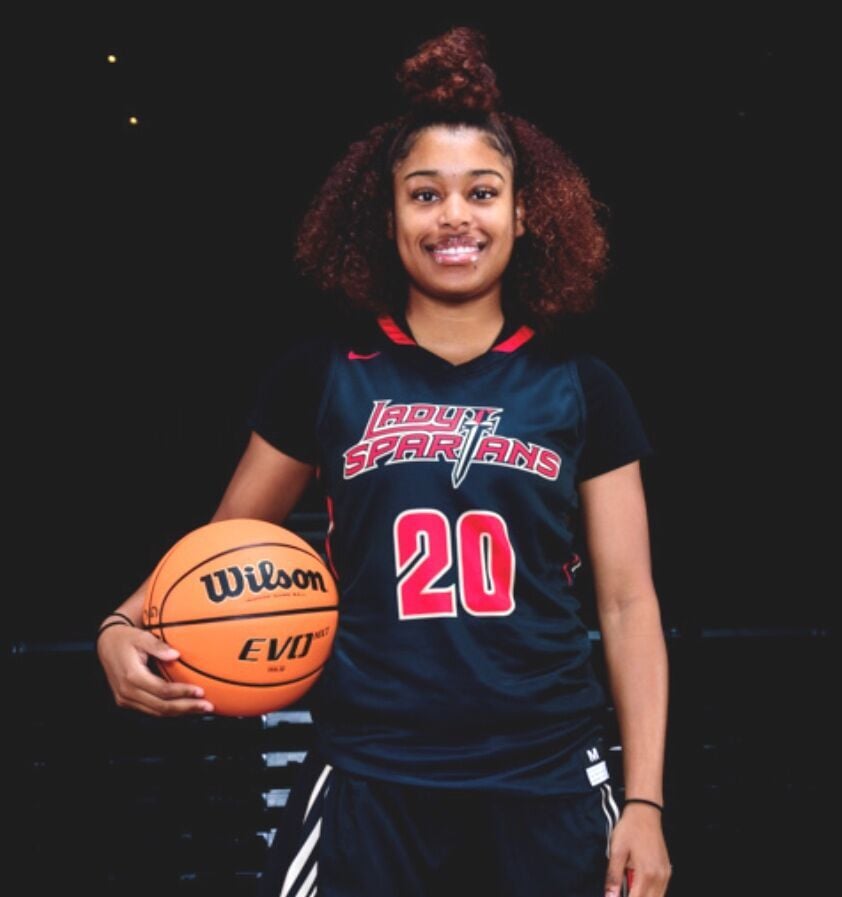 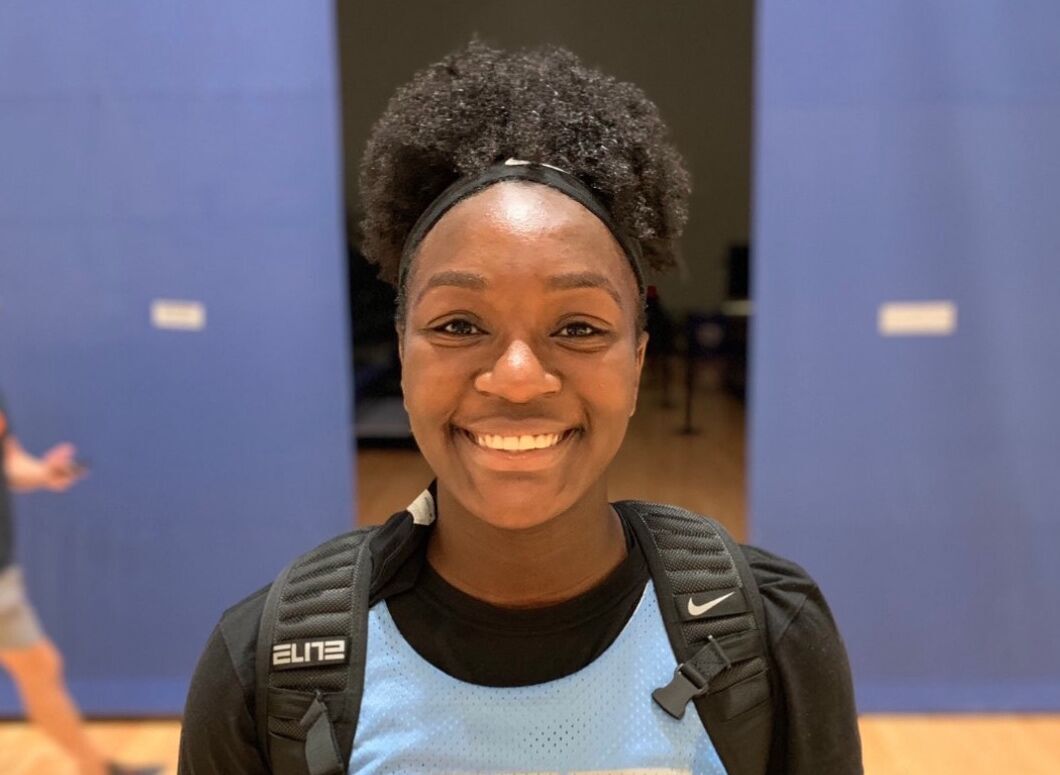 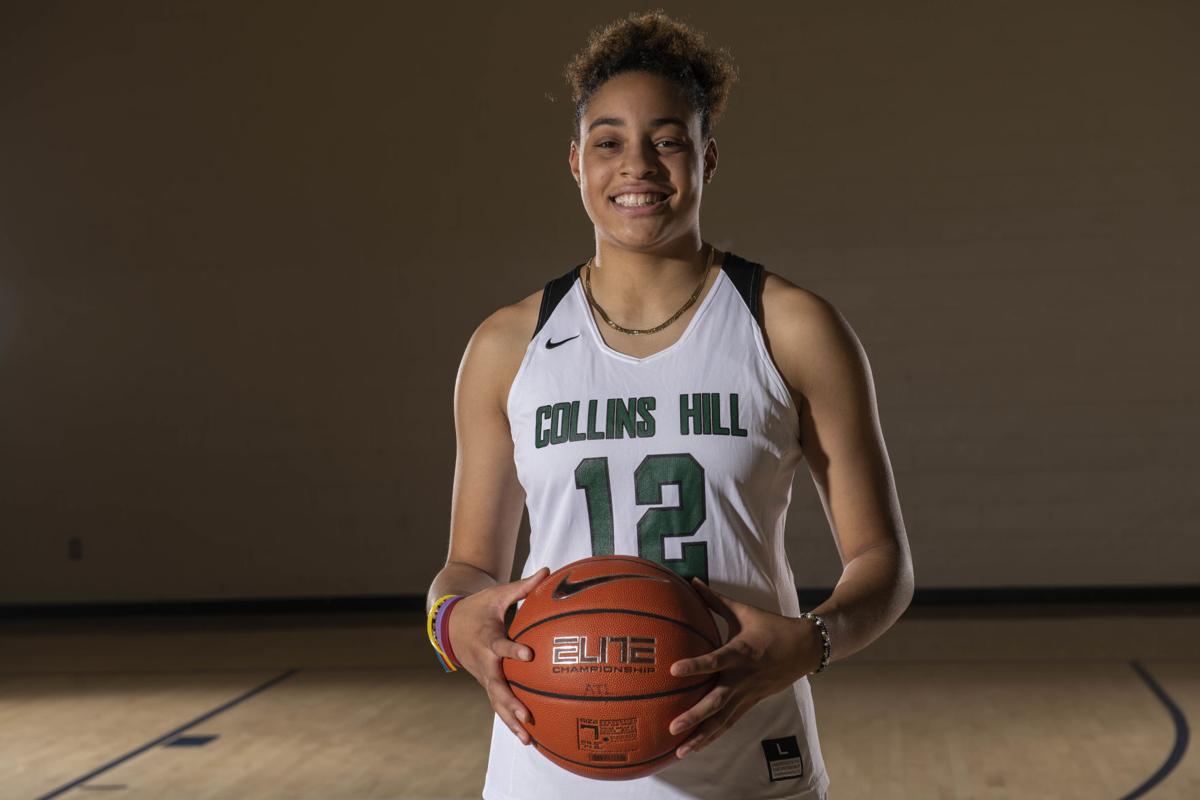 Song that gets me ready for a game: Any son by Lil Baby

What I missed most during the pandemic: Being able to hang out with friends

Noteworthy: Addie carried the largest portion of the scoring load as a sophomore for the Spartans’ state championship team. The rising star averaged 21.2 points, 4.7 rebounds, 2.8 steals and 2.1 assists.

Coach Jessica Guarneri’s take: “I can’t say enough great things about Kaleigh. She is one of the most dynamic players I have ever had the opportunity to coach but beyond that she is just an incredible young lady. Kaleigh works tremendously hard on continually improving her game and is a game changer on both ends of the ball. The sky is the limit for what she can accomplish in her career and the Spartans are pumped to have two more years of her bringing the ball up the court and dazzling the crowd.”

Song that gets me ready for a game: “Ain’t No Mountain High Enough.” We sing it as a team before every game.

What I missed most during the pandemic: Going to team camps in June with the team

Noteworthy: Azar, the daughter of longtime Gwinnett coach Jan Azar, is one of the area’s top shooters who made 107 3-pointers last season (and 235 in her career), but also has diversified her offensive game from earlier in her career. She averaged 19.9 points (second-best in Gwinnett), 4.1 assists, 3.1 steals and 2.2 rebounds last season for a Final Four team.

Coach Jan Azar’s take: “Nicole has had the opportunity to learn from some of the best players that came through my program when I was the coach at Wesleyan. During that time she watched, listened and learned. She has worked extremely hard over the years and now that hard work and commitment has helped her to evolve into one of the best shooters I have had the opportunity to coach, hitting 107 threes in her junior season and 235 in her career. As Nicole has gotten older she has become more than just a shooter and her ability to get to the basket and finish with contact has helped her to score in more ways than just shooting the three. She has also been a big help to our softball program, playing second base for Hebron’s Elite Eight and Sweet Sixteen teams. Nicole not only excels in the athletic arena but also in the classroom. She is a great student, player and teammate, but most importantly she is a great person who sets high standards for herself and is not willing to compromise on or off the court. While I am extremely proud of all that Nicole has accomplished on the court, I could not be prouder of the young lady she has become. I am excited to get to coach her one more season and can’t wait to see what is ahead for her at Samford University.”

Song that gets me ready for a game: “Laugh Now Cry Later” by Drake

What I missed most during the pandemic: Not wearing a mask

Noteworthy: Fisher, voted the Gwinnett’s volleyball player of the year by the county’s coaches, is equally accomplished in basketball, her main sport. She helped the Lions to the Final Four last season by ranking in the top 10 in Gwinnett in scoring (15.6 per game), rebounds (8.8), steals (3.5) and blocks (1.6) along with averaging 3 assists.

Coach Jan Azar’s take: “During the short time I have had to opportunity to coach Malia I quickly realized that she fits in a small group of athletes I have coached who can do just about anything they put their mind to. I truly believe that Malia could walk on any team and be one of the top contributors without one day of practice. When Malia is not on the basketball court you can find her leading our volleyball team to a state championship and state runner-up finish. As a basketball player, Malia led our team last year to a Final Four finish, hit her 1,000th career point and pulled down her 500th career rebound. What I loved about Malia last year was her ability to play within our team and her focus on our team success. She will be celebrated once again this year with many individual awards but her main focus will be to finish her career with a state championship for Hebron. Malia pushes herself to be her best on and off the court. She not only challenges herself on the court, but also in the classroom where she excels in high level classes. I am thankful for the opportunity to coach Malia one more season and I can’t wait to follow her career at Rice University.”

Song that gets me ready for a game: “Freestyle” by Lil Baby

What I missed most during the pandemic: BASKETBALL!!!!!!!

Noteworthy: Ngulefac is an interior force for the Panthers who was an all-state and first-team all-county selection last season. She averaged 15.9 points and 11.1 rebounds in a breakout junior season.

Coach Cynthia Cooper’s take: “Sussy impressed me when she got cut from the seventh grade team. The following year she improved so much with her layups on both sides of the floor. Sussy went from averaging 7 points and 7 rebounds per game her sophomore year to her junior year averaging 16 points and 11 rebounds. Her work ethic is impeccable, and her leadership is incredible on and off the court. She is selfless and loves helping others.”

Song that gets me ready for a game: “Slime Mobb” by 24 Heavy

What I missed most during the pandemic: Going out with friends

Noteworthy: Spearman was at the forefront last season as the Falcons went 26-4, the best season in the modern history of the program, which included the first region championship in 50 years. She averaged 16.9 points, 14.3 rebounds and 2.2 steals as a junior.

Coach Jason Adams’ take: “Zee, who was the AAAAAA North Georgia Player of the Year last season, is a dynamic player in the fact that she can really play all five positions on the floor. She has the ability to score around the rim and knock down long range shots while also finding the open person on the floor, but what truly separates her is her ability to rebound and go get the basketball at its height off the rim on both ends of the floor. Going into her junior season she is already approaching the 1,000 point and 1,000 rebound marks and should eclipse both very early in the season and, in addition, she has helped lead her team to 48 wins in her first two seasons.”

Song that gets me ready for a game: “Emotionally Scarred” by Lil Baby

What I missed most during the pandemic: My friends

Noteworthy: Washington ruled the interior last season for the Eagles, piling up double-doubles as they reached the Class AAAAAAA state finals and finished 31-1. The national top-100 recruit was the Class AAAAAAA North Player of the Year by the Georgia Athletic Coaches Association.

Coach Brian Harmon’s take: “Sacha is a leader both on and off the floor. A true student-athlete that happens to be an excellent basketball player. Her intensity for the classroom is just as determined as she is on the floor. It is a pleasure to coach and be a part of her pursuit of excellence in the game of basketball.”