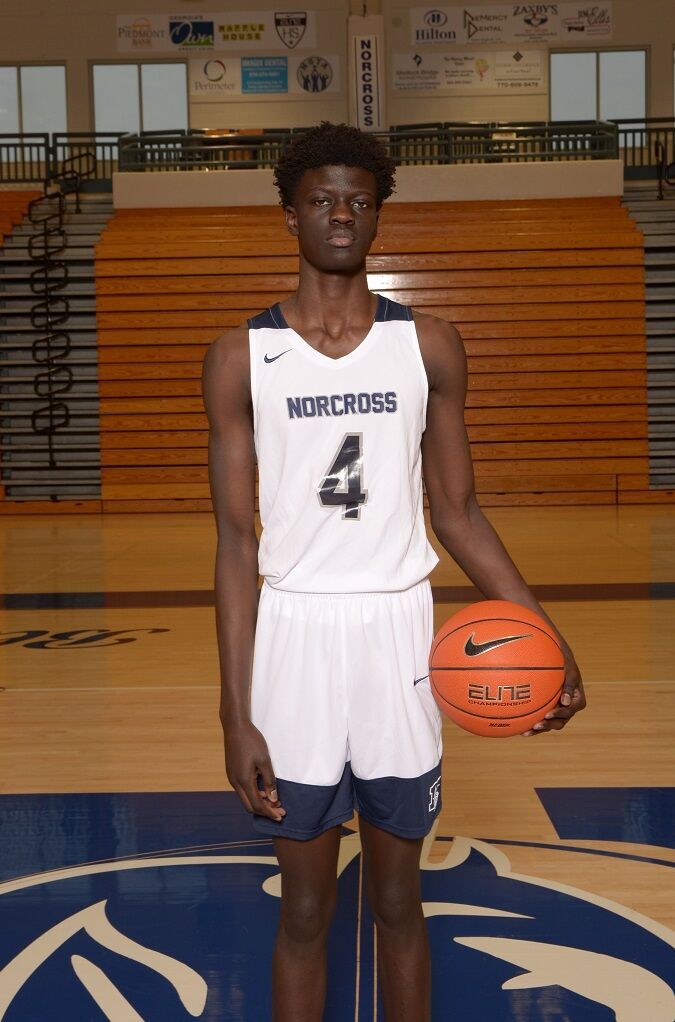 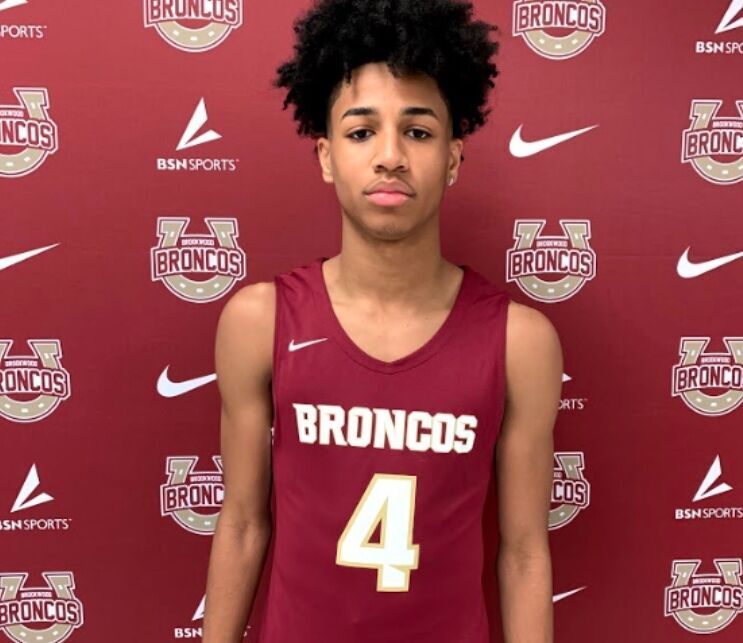 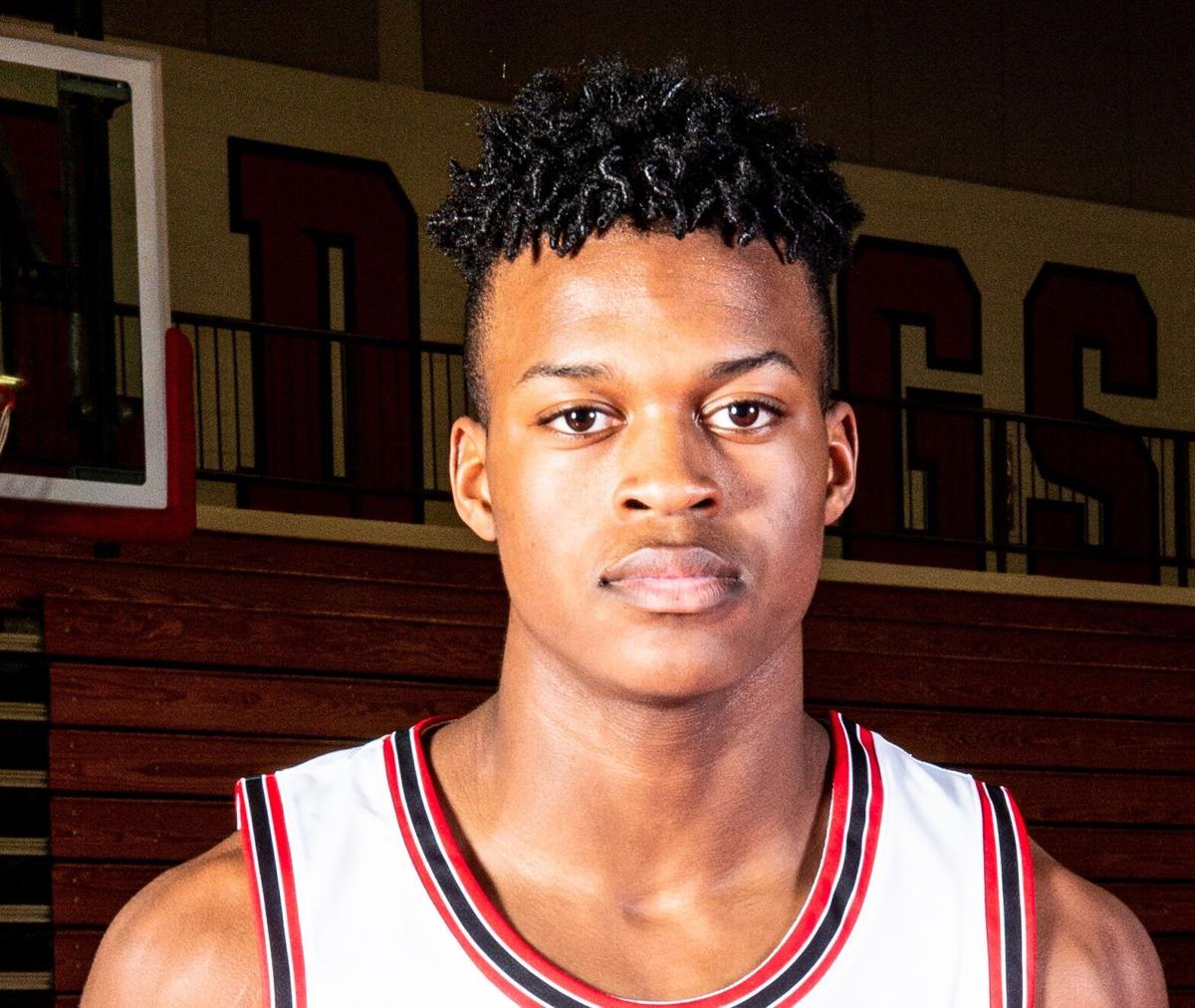 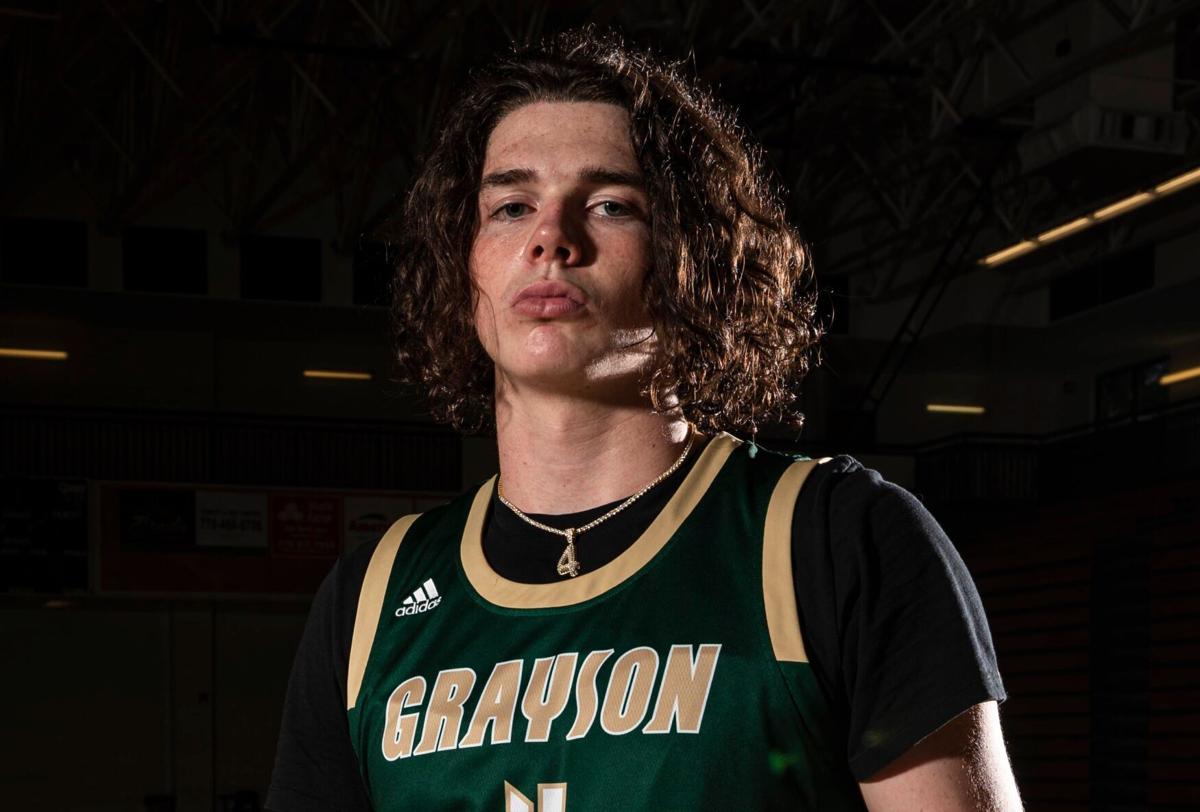 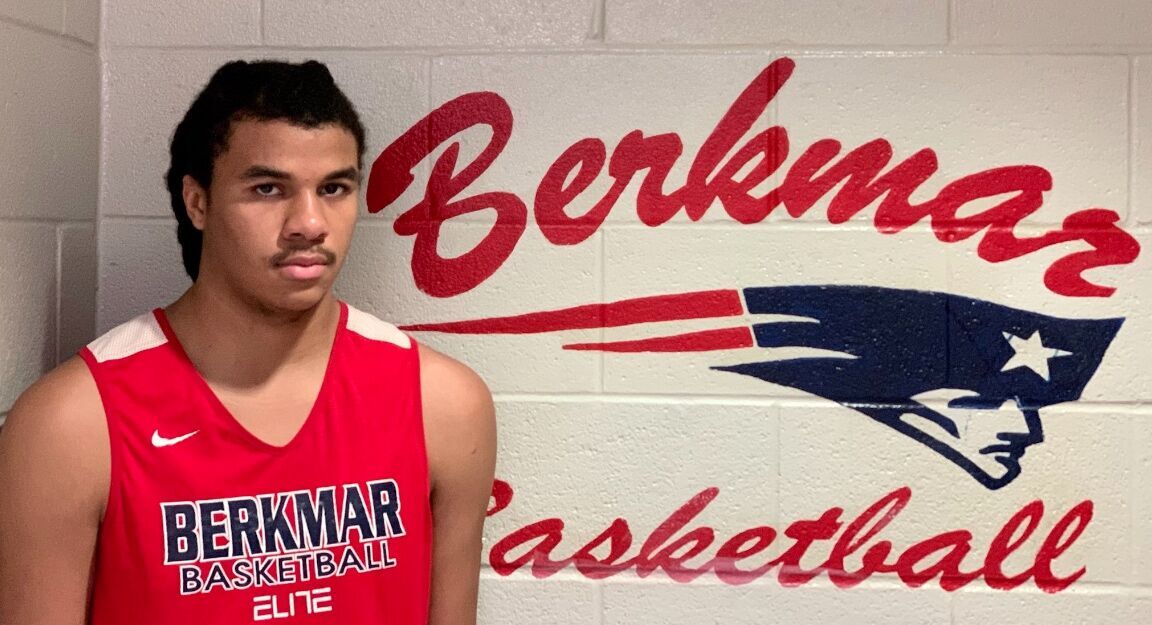 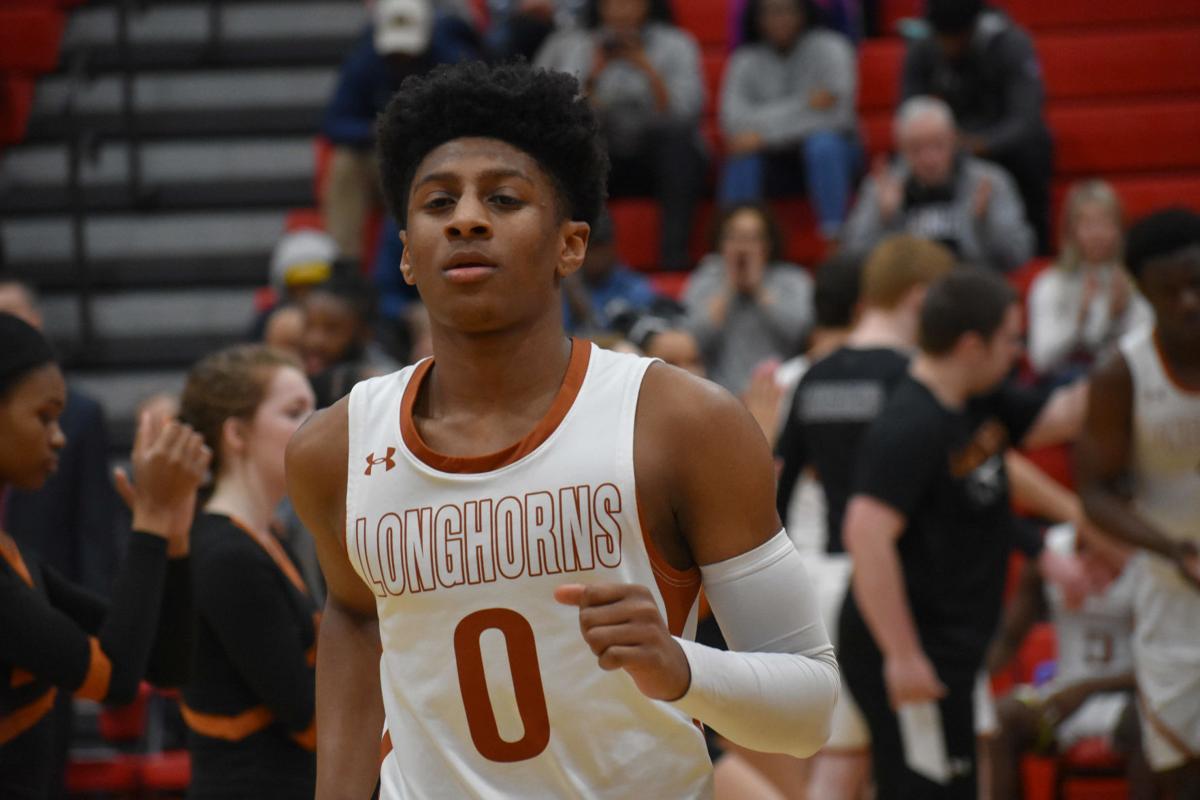 Lanier’s Andrew McConnell runs onto the court after being introduced Monday at the Region 8-AAAAAA Tournament.

Number of states I’ve played basketball in: 6 or 7

Song that gets me ready for a game: “Humble” by Lil Baby

What I missed most during the pandemic: Hooping, playing pickup

Noteworthy: The 6-6 combo guard came on strong late in his junior season, averaging 7.5 points, 3.5 rebounds and two assists for a team led by the high-scoring Varun Danak. He became a hot commodity since last season ended, racking up the offers before signing with Morehead State.

Coach Daniel Bowles’ take: “It's been a fun journey watching Chris grow as a person, a student and a basketball player over the last three years. Chris' hard work led to a breakout junior season and continued with a great summer to put himself on the map as a Division I college prospect. I'm proud of Chris' maturation and excited for his senior season and the chance to watch him continue to grow as a student-athlete at Morehead State University.”

What I missed most during the pandemic: Working out every day

Noteworthy: The athletic big man, who ranks among the nation’s top 100 juniors, has a high ceiling and a pack of top offers, including in-state Georgia and Georgia Tech. Alabama and Florida also are among those offers.

Coach Greg Phillips’ take: “Malique has as high a ceiling as any player I have had the privilege to coach. Combine that with a growing work ethic and very high basketball IQ, he is set up to be another one of the special players to come out of Gwinnett County. What makes him truly special is how he treats people. Just last night, he grabbed the bag with all the towels and water bottles from a manager to carry without prompting. That won't show up in the stat sheet but may be the most important stat of all.”

Song that gets me ready for a game: “Flatbed Freestyle” by Playboi Carti

What I missed most during the pandemic: Out of town trips for AAU

Noteworthy: The versatile Godfrey played everywhere as a sophomore, and emerged as a go-to offensive player for the Bulldogs on the way to a region title and a state tournament run. He averaged team highs of 14 points and 7 rebounds along with 3 blocks. A top-150 nationally ranked junior, he is the son of former Georgia Bulldogs and NFL linebacker Randall Godfrey.

Coach Matt Garner’s take: “R.J. is obviously a special talent, and he's a joy to coach. He's one of the best, if not the best, to ever do it at North Gwinnett. He's so versatile at the high school level that we are able to play him at five different positions on offense and defense. My favorite quality about him is that he's a great teammate. R.J. was recently voted a team captain by his peers, which is a job I do not expect him to take lightly. He had a strong finish to our season last year where he averaged almost 20 points and 10 rebounds down the stretch, so we are excited to see what he has in store for us this year.”

Song that gets me ready for a game: Anything by Baby, GotIt, Keed, BP, Rylo, NoCap, Slimelife, Ola and Noodah05

What I missed most during the pandemic: Just being able to go out whenever

Noteworthy: McConnell, one of the area’s top shooters, played a pivotal role last season, the best in school history with a run to the state finals. He averaged 15.2 points, 4.2 assists, 2.7 rebounds and 1.6 steals.

Coach Branden Mayweather’s take: “Andrew McConnell is an elite shooter and an elite playmaker. Having the opportunity to watch him grow, and seeing that growth from work he puts in, has been as rewarding as any moment in my coaching career. He is a winner on and off the floor and is just now scratching the surface on how great he truly can be. I am blessed to be able to coach him and looking forward to taking another step on this journey with him.”

What I missed most during the pandemic: I missed being able to go to the gym whenever I wanted

Noteworthy: Schieffelin has risen to an ACC-level recruit with his improvements in recent seasons, and his defensive work and rebounding, along with timely scoring for a balanced offense, were keys in the Rams’ state runner-up finish last season. He averaged 10.7 points, 10.2 rebounds, 2.7 blocks and 1.7 assists.

Coach Geoffrey Pierce’s take: “Ian Schieffelin is a coach's dream. He's low maintenance, unselfish, team first and all about winning. Everything outside of winning is secondary to Ian. He has never done anything in the classroom or outside of school to embarrass himself or the program. He's one of the hardest working, self-motivated kids that I have ever coached. His parents have always been supportive of the program and you can tell that they are a big part of the reason that he operates with the type of self-discipline that he does. He's extremely coachable and never gets discouraged or loses his composure when he is coached hard. Every summer from his eighth grade year until now he has addressed a weakness in his game and added a strength to it. When school got shut down on a Friday in March, he called me the following Monday to get workouts and equipment so he could work on his own since our school and gym wasn't available. Many people questioned his decision to quit playing football and focus on basketball heading into his sophomore year, so I am extremely happy for Ian that he was able to work his way into becoming an ACC basketball commit. He's worked for everything that he's received as it relates to his status as a basketball player. He isn't interested in receiving any handouts. I'm really looking forward to watching his continued development as a player, leader and young man this season.”

Song that gets me ready for a game: “Pass The Water” by Lil Durk

What I missed most during the pandemic: Seeing my family

Noteworthy: The multi-dimensional forward can play inside and out thanks to his ball handling and shooting, part of a skill set that has made him one of the nation’s top senior recruits. He is ranked in the top 150 nationally in the Class of 2021.

Coach Jesse McMillan’s take: “We expect Kok to have a great year in 2020-2021. He understood and played his role on last year’s team and this season is ready to step up and be a major part of our offensive and defensive systems. Kok has worked to expand his game in the offseason and shown a very well-rounded skill-set so far this year. He represents Norcross on and off the court by maintaining a strong GPA and has signed to play in the Big East Conference for DePaul University.”